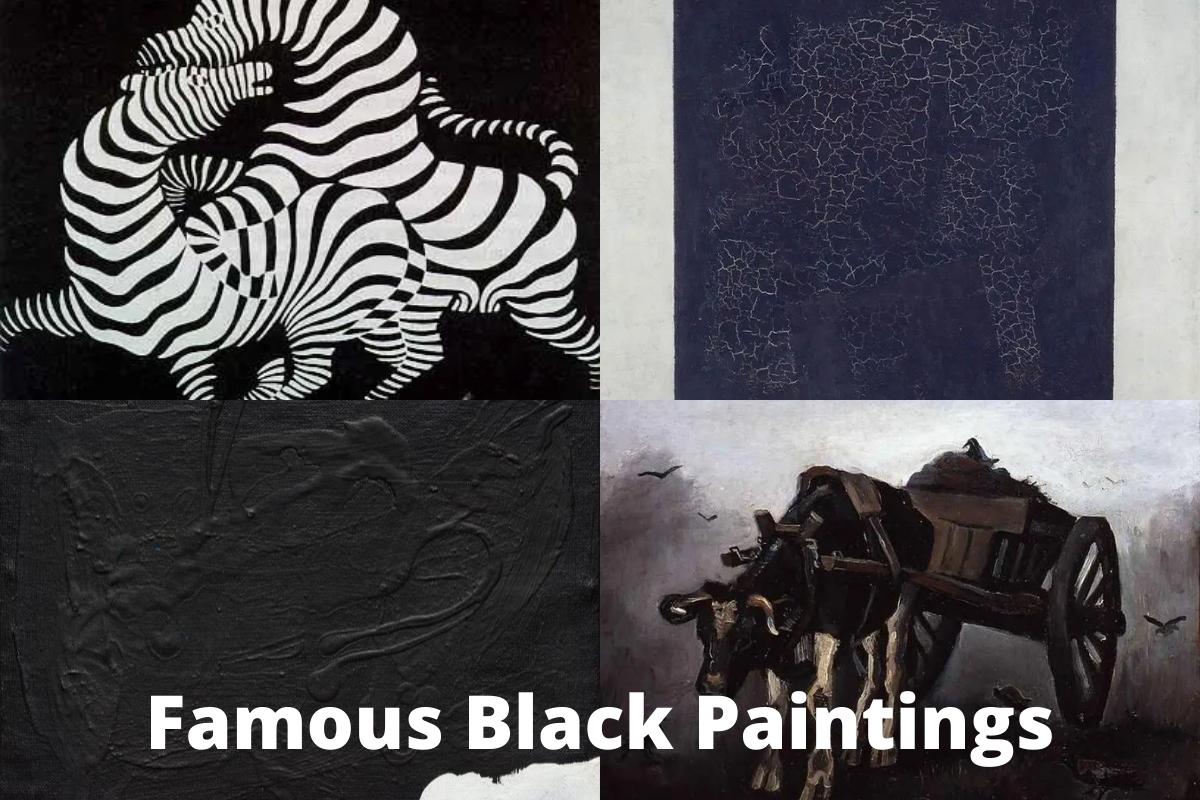 The challenge of portraying light and darkness has always been present for artists throughout most of the key art movements of the last several centuries.

Black paintings are often done in an effort to express a sense of darkness or detriment, but painters in the modern era have created them for a variety of different meanings.

In this article, we will examine some of the most famous black paintings from history, as well as the artists behind the works and why they painted them.

One of the most iconic works from the modern era and one that is certainly among the most famous black paintings in recent history was done by Kazimir Malevich.

Born in Ukraine near the height of the Impressionist movement, Malevich would seek to produce a new style of movement of his own in many ways when he began his career in the late 19th century.

The painting that he is most famous for is titled Black Square and the first version of this work was completed in 1915 at the height of his career.

As the name indicates, this work consisted of only a large, black square in which the artist used copious amounts of black paint on the canvas to produce a distinct appearance when it dried.

Art historians and critics alike have noted this painting and its unique perception. It is a perfect representation of modern art and represents the sense of exploration into styles that were previously not considered.

Francisco Goya is recognized as one of the most distinguished painters of the Romanticism era, which took place during the 18th and early 19th century in Europe.

Many of his work feature a dominating sense of darkness or black coloring, which is often believed to have been intended as a means to represent evil in his paintings.

One of Goya’s most well known works is titled Two Old Men. This painting was completed in 1823, but it’s believed that it took Goya at least 3 years to finish as he was considerably older than most of his colleagues within the Romantic movement.

As the name indicates, the painting depicts two old men that are set against a dark, black background.

This painting is part of a series of 14 such works that are known as Goya’s Black Paintings. Each of these paintings depict twisted and somewhat caricatured figures that are set against a dark, black background.

Juan Sánchez Cotán is remembered as one of the few avant-garde painters of the Baroque movement in Spain. Unlike many of his contemporaries, Cotán explored the rendering of his works with extreme realistic detail instead of romanticizing his subjects.

One of Cotán’s most notable works is one that he completed at the height of his career in 1602. It’s titled Quince, Cabbage, Melon, and Cucumber and features a common still-life style subject matter that’s set against a black background.

This work is a classic example of Cotán’s distinct style of still-life painting, which all consisted of a very dark background that was meant to define the objects within the painting to a greater degree.

The very dark background of these paintings is done in stark contrast to other still-life artists’ works, which typically had a lighter background.

Édouard Manet is best-known as one of the greatest painters of the French Impressionist movement that took place in the 18th century. However, the artist displayed a masterful ability to depict subjects in the highly-popular Realism style that was also present during the mid-1800’s.

One of his greatest Realism works is also a painting that is among the most morbid done by Manet. Completed in 1865, this painting was titled The Dead Man, or Dead Toreador as it portrays the body of a bullfighter stretched across the ground with his muleta in hand.

The bullfighter’s clothes are mostly black, and the painting contains exceptional amounts of realistic detail that represent the mastery of Manet’s ability as an artist.

Another famous black painting that was done by Francisco Goya had many of the same qualities and characteristics that his Two Old Men work was known for.

The work was also done around the same time period, which was toward the end of Goya’s life and at a phase of his life when many of his works were distinctly black.

The painting is titled Man Mocked by Two Women and was completed in 1823 and is similar in many ways to Goya’s other black paintings which feature distorted human faces that many critics point to as somewhat demonic in appearance.

This painting was one of his 14 famous works that are known as Goya’s Black Paintings.

American painter Ad Reinhardt was one of the many abstract artists who lived during the early 20th century United States.

As the Industrial Revolution had brought America and Europe into a new age, the artwork that many painters produced reflected a much more distinct character than those found in previous generations.

Reinhardt’s work was known for being particularly dark and his most famous painting is known as Abstract Painting No. 5.

The iconic black painting was done in 1962 and features a canvas that appears to be solidly-colored with black paint. This, along with almost every other work from Reinhardt, was done exclusively in black paint.

Robert Motherwell is another famous abstract artist from the mid-20th century. The American painter is best-known for his many different works that include heavy use of black paint and dark tones set against the canvas.

His works were viewed by critics and scholars as being, not only abstract, but philosophical and even politically-motivated in many ways.

One of his greatest masterpieces is titled Iberia and was done in 1958. This work features Motherwell’s distinct manner of employing one solid color in varying degrees of depth to create lighter and darker tones on the same canvas.

This, like many of his other paintings from Motherwell’s Elegies series, includes abstract patterns of intricate shapes and columns.

Although it is known that Motherwell worked in various colors to produce these kinds of paintings, Iberia is one of the most well-known as it is both simple and deeply reflective.

Many critics believe that Motherwell’s unique painting style was tied to the Spanish Civil War and the darkness that accompanies such violent conflicts.

Another abstract artist that was well-known for using solid colors across a large canvas was Mark Rothko. In fact, this particular style of abstract expressionist painting would later become synonymous with the equally-distinct name, Rothko.

The painter often created works that seemed overly simple to the casual viewer, but were deeply-connected to more intricate subject matter that it represented.

Although Vincent van Gogh is known to have gone through various periods in which his mental and emotional state were said to be distinctly dark, his painting style was almost exclusively bright and vibrantly-colored.

Many of his works center around flowers, landscapes which he created ‘en plein air’ and other natural paintings that featured the Impressionist style.

Van Gogh was deeply-disturbed in the latter part of his short life and spent many months at a time in some of the asylums and mental hospitals along southern France and around the city of Paris. One of his most notable black paintings is titled Cart with Black Ox and was finished early in his career in 1884.

The artist is known to have produced a few other variations of this same particular subject matter and it is said to have originated from his time spent in the small farming village of Nuenen, which is located in southern France.

Our list of paintings that feature heavily-darkened subject matter would not be complete without mentioning the works of Victor Vasarely, who was famous for his use of an abstract painting style in which he created optical illusions.

Vasarely is known to have used a variety of different methods to create optical illusions, but he often relied on black, definitive features to produce these unique effects on his viewers.

One of his greatest works is simply titled Zebra. This iconic 1937 painting was created using black and white colors along with specifical-placement of the two zebras to produce a strange and distinct visual effect.

The two zebras in the painting have their necks wrapped closely together, which creates a sense that the stripes on either animal are somewhat intertwined with one another in an illusory manner.