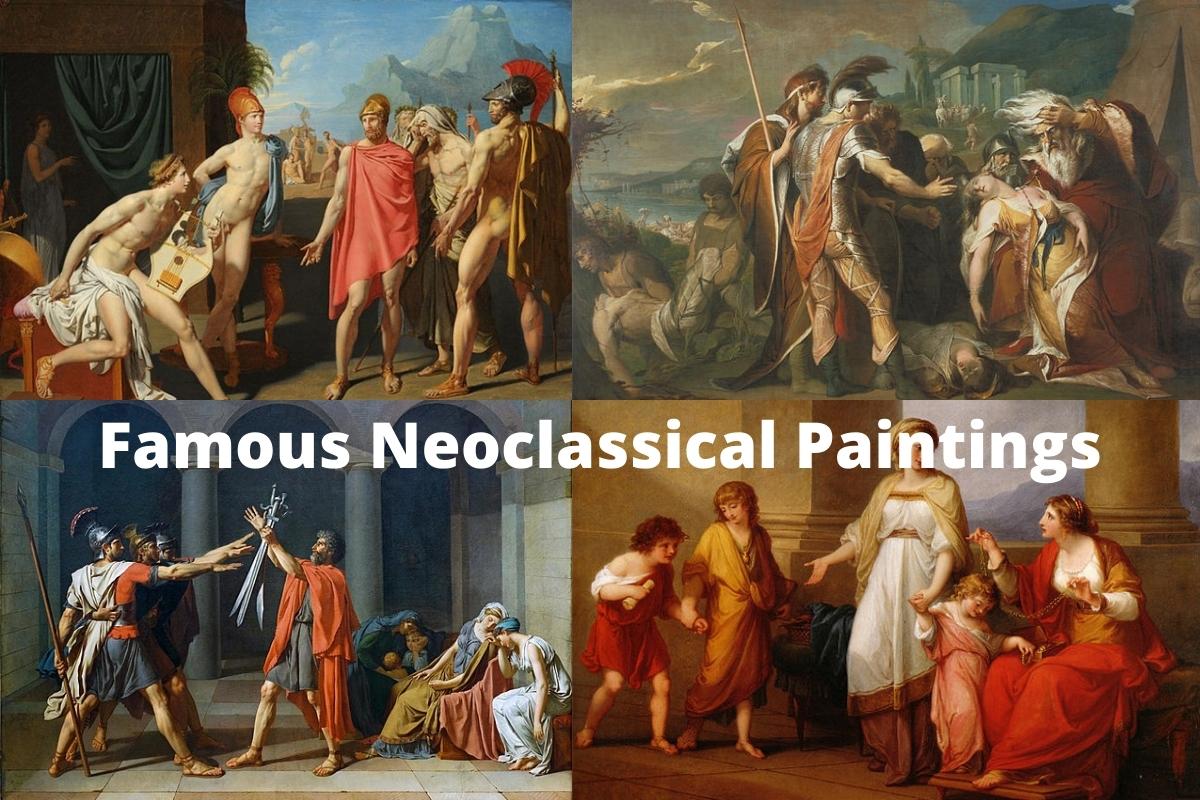 The Neoclassical era began in the latter part of the 18th century after a focus on Greek and Roman Classical themes became popular with fledgling artists and students.

It was quite common during this time for most aspiring artists from Europe to travel to Italy and Greece in their efforts to study some of the more prominent art movements from history that were founded there.

A renewed interest in Classical art, history and lifestyle was sparked by the rediscovery of Pompeii and Herculaneum in the middle of the 18th century.

Artists sought to once again explore the concepts that had been popular in the Classical time period. This new focus on Classical themes involved artists creating works that featured historically accurate depictions of various scenes from history.

In this article, we’ll take a closer look at some of the more well-known Neoclassical paintings and scultpures and examine the inspiration and history regarding the works and the artists who created them.

1. The Death of Marat – Jacques-Louis David

Jean-Paul Marat was one of the most famous figures that’s credited with leading the French Revolution during the late 1700’s. He was a journalist who later served as a politician and his death marked a turning point in the fight to wrench the country from the hands of wealthy aristocrats.

Marat was stabbed to death by a woman who sympathized with a group that Marat had been responsible for virtually eradicating.

Marat’s death was depicted in a work titled The Death of Marat, which is now considered to be a famous Neoclassical painting.

Jacques-Louis David created the painting in 1793, just months after Marat’s assassination as an effort to commemorate the political figure’s life and efforts to fight for the central cause that would be the driving force of the bloody revolution.

David is remembered as one of the most prolific artists from the Neoclassical era and his works often centered around famous events in history. This painting features a dying Marat lying in a bath with his hand clutching a note. The words on the paper include a message related to his killer, a woman named Charlotte Corday.

Antonio Canova is one of the most widely-heralded sculptors of the Neoclassical movement. During his career, it became popular for art galleries to have nightly displays of sculptures that were illuminated only by torchlight.

Canova was an artist who fully embraced this practice and was said to have put the finishing touches on each of his works late at night by the light of a candle.

One such work that gained a high amount of praise is known as Psyche Revived by Cupid’s Kiss. This sculpture was finished in 1793, but there were other versions of this same work that were completed later by the artist. The sculpture is a distinct representation of the Classical theme of Romanticism that was so prevalent during this time.

Canova sought to create a work that portrayed Cupid, the Roman god of love and desire reviving Psyche with a kiss.

The story of Psyche and Cupid was a well-known love story from Roman mythology and the sculpture depicts a winged Cupid holding the nude figure of Psyche who is seen reaching up to embrace him.

3. Oath of the Horatii – Jacques-Louis David

Much of Jacques-Louis David’s early work revolved around the most prominent stories and events from history during the Classical era.

While he was studying at the French Academy in Rome during the early 1780’s, he developed a fascination with some of the most famous figures and legends from Roman history. During this time, he created a work that many critics and scholars point to as David’s most famous painting in 1784.

The work is titled Oath of the Horatii and is known for incorporating many elements from the Neoclassical style that include bold colors and a heavy emphasis on historical accuracy for what was believed to have been the actual story behind the event.

The painting centers around a legend that dates back to the 7th century B.C. which tells of a dispute between two cities.

This painting depicts the father of the Horatii brothers holding their swords as the brothers salute him before heading to battle.

The Seven Years War was a bloody and hard-fought campaign that was fought between the French and the British for dominance of what was then the colonies owned by France.

Artist Benjamin West commemorated the battle in a painting titled Death of General Wolfe. This 1770 painting is one of the more iconic works from the Neoclassical era, but it is also one of the few that is historically inaccurate in some of the most important details of the actual events.

The painting portrays Wolfe dying in the arms of his officers, but in reality, he was killed instantly by a hail of bullets from the French soldiers.

Jean-Antoine Houdon was a widely-celebrated sculptor and painter from the Neoclassical movement. One of his most famous sculptures is a bust that depicts the highly-acclaimed writer and philosopher, Voltaire.

This simple sculpture depicts the head and face of Voltaire in a way that was characteristic of Houdon’s style.

It shows an aged Voltaire with a somewhat astute expression on his face. Houdon’s sculpture of Voltaire displays him in a very detailed manner and the viewer can clearly tell that the figure is that of an old man who has lost his teeth and hair, yet still maintains a sense of vitality in his eyes and expression.

6. Cornelia, Mother of the Gracchi, Pointing to her Children as Her Treasures – Angelica Kauffman

Angelica Kauffman was a Swiss painter during the height of the Neoclassical era. She created a range of artworks depicting figures from the time period in Austria, where she lived for many years.

One of the artist’s most famous works that’s also lauded as an iconic Neoclassical painting is one that she painted in 1785.

The work is titled Cornelia, Mother of the Gracchi, Pointing to her Children as Her Treasures. It depicts a woman named Cornelia, who was said to be the mother of esteemed Roman leaders Tiberius and Gaius Gracchus.

According to the legend, a woman met Cornelia and showed her an array of jewels and treasures that she had accumulated, claiming that they were her most prized possessions. When the woman asked to see Cornelia’s most prized treasures, she gestured to her children, who would become the future rulers of Rome.

Jean-Auguste-Dominique Ingres was an artist who fully embraced much of the mystique that surrounded the ancient legends told in Roman and Greek manuscripts.

Many of Ingres’ paintings depict various scenes from history or Roman mythology, which was quite common among some of the more famous Neoclassical artists of the time period.

One of his most famous paintings is said to be a work titled Achilles Receiving the Ambassadors of Agamemnon. The painting depicts a moment from the popular story of the Trojan War that involved the forces of Greece and Troy.

Ingres’ painting depicts Achilles, the legendary hero and god-like warrior, speaking with ambassadors of the Greek ruler, Agamemnon, who are begging him to return to the war effort.

Ingres created this painting as an entry in a famous contest known as Prix de Rome, which was essentially a scholarship competition for young and aspiring artists and sculptors.

8. The Birth of Venus – William-Adolphe Bouguereau

French painter William-Adolphe Bouguereau is regarded as one of the most well-known figures from the Neoclassical movement.

Many of his works featured scenes from Roman or Greek mythology, but many of them were done in strikingly realistic detail. Many of these paintings involved nude women, which were somewhat controversial at the time.

One of Bouguereau’s most famous paintings was a work depicting the Roman goddess of love, beauty and desire, Venus, who the Greek mythology legends refer to as Aphrodite.

In his painting, titled The Birth of Venus, Bouguereau depicts the goddess coming forth out of the sea. She is seen standing on a conch shell, surrounded by other gods and goddesses from Roman mythology who are all gazing at her with wonder.

Venus is said to have been the epitome of female beauty and physique and the artist’s work depicts her as having a near-perfect figure and long, flowing hair.

One of the most iconic paintings of the Neoclassical era was done by Anton Raphael Mengs in 1784. Mengs was a prominent German artist who developed a reputation as an artist during the Rococo period, but would later be one of the main figures that helped shape the early Neoclassical period.

Meng was commissioned to paint a large fresco in one of Rome’s most famous structures, the Villa Albani. The work that Meng created would instantly be recognized by art critics and his peers at the time as a masterpiece.

The painting is titled Parnassus and depicts a figure known as Mnemosyne, who was the mother of the nine Muses, who were prominent figures from Roman mythology.

The painting was celebrated as a pivotal work that defined the new era of Neoclassical painting and artwork.

The works of Irish painter James Barry were not widely recognized until long after his death in 1983. He is known to have been influential in the life of renowned poet, artist and printmaker William Blake and his paintings hold a peculiar sense of glowing beauty and detail that critics claim is quintessential to the Neoclassical style.

Sadly, he did not enjoy much praise for his works during his lifetime and is said to have died with many of his works being yet undiscovered by art critics and collectors.

One of Barry’s most famous paintings is titled King Lear Weeping over the Dead Body of Cordelia. It was commissioned by Alderman Boydell’s as the painting was to be included in his ‘Shakespeare Gallery.’ The 1788 work appears to be very Classical in nature, but depicts a famous British legend instead of the time period’s usual Greek or Roman theme.

Barry portrays a tragic scene from the Shakespearean work in which King Lear is seen holding his deceased daughter Cordelia. The artist further added British elements to the work by including the image of Stonehenge in the background.