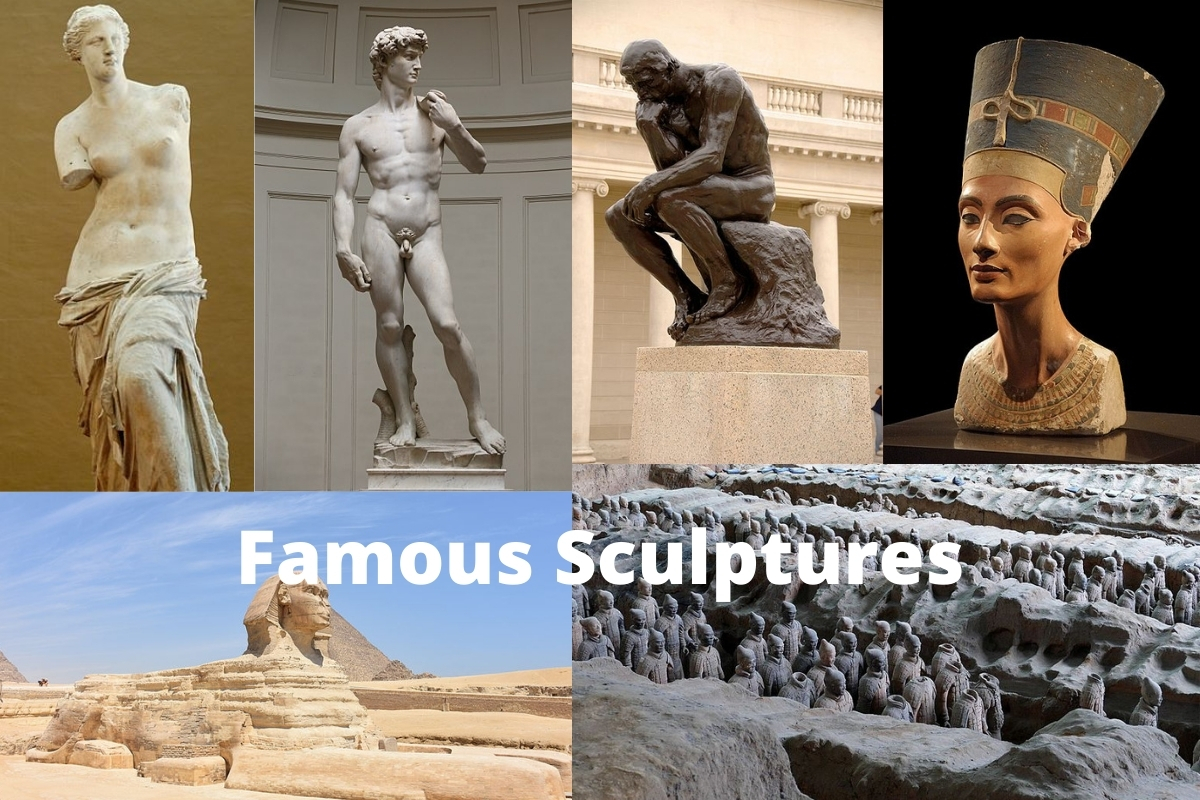 Sculpture has long been a way for humans to artistically express themselves and their beliefs. It has also been used to create large statues of different figures to commemorate certain figures or even hail particular gods or goddesses.

The first of these known sculptures are believed to date back to as far as 40,000 years ago.

There have been many sculptures throughout history that have amazed viewers while some have baffled historians and scientists.

There are many famous works done by well-known artists from different time periods, but some of the most intriguing sculptures in history are very much a mystery.

There is some debate among scholars and art historians as to what the greatest sculpture is in modern times, but here are our selections for 10 of the most famous sculptures in history.

Michelangelo di Lodovico Buonarroti Simoni was one of the most prominent members of the Italian Renaissance era that took place in the 15th and 16th centuries. He was highly-regarded for his abilities as a painter, but it was Michelangelo’s sculpting that truly caught the attention of everyone that witnessed his work.

Critics and historians view his work known as David as Michelangelo’s greatest masterpiece. This larger-than-life statue of the well-known Biblical king and hero was done by the artist in 1504.

The work was commissioned by the city of Florence, Italy where Michelangelo had done a number of prominent sculptures already.

The sculpture was intended to be displayed along the roofline in front of the city’s cathedral, but when it was finished, it was deemed to be too magnificent to be kept at such a distance.

The sculpture was instead displayed in front of the city’s headquarters, the Palazzo Vecchio. The work is known as one of the most lifelike depictions ever done and was sculpted from marble.

2. The Great Sphinx of Giza

The area surrounding the site of Giza, Egypt is scattered with an abundant number of statues, obelisks, and of course, pyramids. However, the single-most famous, as well as mysterious, piece of art is undoubtedly the Great Sphinx.

Scientists and historians have studied this massive sculpture for hundreds of years and the Sphinx’s origin and true purpose still remains a mystery.

For many centuries, the Sphinx was thought to be a simple statue of a human head. It’s face was damaged by cannon blasts, and it was believed to be nothing more than a strange sculpture that sat near the Great Pyramids for many years.

It wasn’t until the early 19th century that historians began to once again unlock the Sphinx’s secrets by digging out the sand from around the base.

After the entire sculpture was revealed, historians and scientists were baffled at its size, shape, and what the meaning of the Sphinx might be. It has the head of what seems to be a pharaoh with the body of a lion.

Some scholars estimate the statue to be a few thousand years old, but recent analysis of the weathering of the stone walls around the edge of the base indicate that the Sphinx has been worn down by immense amounts of rainfall.

This is intriguing to anyone familiar with Egypt as the region has been known to be a desert since the earliest recorded history.

China’s most famous sculpture wasn’t discovered until 1974 when farmers stumbled upon strange clay statues buried in Lintong County, outside Xi’an, Shaanxi while digging a well. When archaeologists came to the scene, they uncovered the mysterious sculpture and discovered thousands more on the site.

It is believed that these statues were made as a funeral offering to Qin Shi Huang, the first emperor of China as a way to provide him protection in the afterlife.

The sculptures are made of molded clay that was baked in the same way that is commonly used to create pottery. The clay soldiers are displayed in marching formation with exquisite detail on each one. Each soldier sculpture is life-sized and every single one has its own distinct features.

It is believed that each member of the emperor’s most loyal soldiers were models for the Terracotta Warriors, which explains why each one has such unique features. The army still stands on the site where it was discovered as moving the figures is believed to be too dangerous and will result in them breaking.

One of the most iconic sculptures from ancient Greek culture is known as Venus de Milo. This statue is famous for its incredible detail, and is easily recognized as the woman depicted is missing both arms.

This sculpture is believed to have been completed some time around 130 to 100 B.C. by Alexandros of Antioch, who was a well-known Greek sculpture during the Hellenistic age.

The statue of the Greek goddess Venus was nearly lost to history until a farmer found it on the island of Milos in the Aegean Sea in 1820. The statue was in pieces, but was taken to King Louis XVIII of France who decided to put it on display in the Louvre in Paris.

Historians say that the figure of Venus was originally adorned with jewelry around her neck, arms and head.

Another very well-known sculpture from the Greek Classical period that took place around the 4th century B.C is known as The Discus Thrower. This work is also commonly referred to as Discobolus of Myron and little is known about who actually created the masterpiece.

The original Greek bronze statue has been lost to history, but it lives on through several Roman copies that were made centuries later.

The sculpture depicts a young man in the middle of a discus throw, which was a popular sport and has long been an event at the Olympic games since they were established.

The most prominent surviving copies of this statue was done in the 3rd century and captures much of the detail and mastery that the original contained.

Historians point to another incredible work from Egypt as one of the most famous busts of all time. The small bust statue is known as Bust of Nefertiti and is believed to have been done in 1345 B.C. when Egyptian culture was at its peak in many ways.

The sculpture features the bust and head of the famed queen Nefertiti, who was the wife of Akhenaten, one of the most prominent Pharaohs.

The statue was carved out of limestone and features paint that was applied to a stucco coating. Nefertiti is one of the most iconic figures from Egyptian history and was famous during her lifetime as she was known for her incredible beauty.

The sculpture is credited to a famous Egyptian sculptor named Thutmose as it was discovered in his workshop in 1912 by German archaeologists. The statue has remained in Germany since its discovery and is now displayed in Berlin’s Neues Museum.

One of the most highly-celebrated modern sculptures is known as The Thinker. This iconic work was completed in 1904 by Auguste Rodin, a French artist who is known by many historians and scholars as the Father of Modern Sculpture.

The sculpture itself is a massive depiction of a nude male figure sitting in thought, his head resting on his hand.

Rodin began the incredible work in 1880 and it took him more than two decades to finish. The artist originally said that The Thinker was based on his interpretation of Dante’s Divine Comedy and many scholars and art historians believe that the sculpture represents Dante himself.

The work was originally called The Poet and has long served as an iconic representation for philosophy and thought.

Another depiction of the Biblical figure David was done by prominent Renaissance artist Donato di Niccolò di Betto Bardi. Known simply as Donatello, the artist has been one of the most central figures from the time period.

This portrayal is vastly different from Michelangelo’s interpretation and features the famous Bible hero and giant slayer as a young, slender boy.

The statue is made out of bronze and is often referred to as The Bronze David since it was created in relatively the same time period as Michelangelo’s work.

Finished some time in the 1440’s, David is curiously depicted as wearing a certain style of hat that was common for Italian nobles of the Renaissance era.

He is seen holding a sword, which he has pointed into the ground and is leaning on one leg. The armor of King Saul sits at David’s feet. This bronze sculpture is one that’s said to be among the most evenly-proportioned sculptures ever created.

9. The Angel of the North – Antony Gormley

In recent years, many art scholars and critics have pointed to Antony Gormley’s The Angel of the North as a true masterpiece. This massive work sits in Gateshead, Tyne and Wear, England. It’s displayed along the A1 road and has become a prominent landmark since it was erected in 1998.

The work and it’s placement along the side of the A1 roadway was met with considerable opposition in the early stages of the sculpture’s planning and implementation in 1994, but it has since become a popular tourist attraction.

The Angel of the North’s unique structure is made out of steel and stands a full 75 meters in height. The overall meaning of the sculpture is said to be a transition between the industrial era into our modern day.

Our list of famous sculptures would not be complete without mentioning another one of Michelangelo’s masterpieces that’s known as The Pietà. Many scholars and art critics argue that this was the artist’s greatest work, but there’s no denying the intense level of realism and intricate detail in the sculpture.

The work depicts Mary, the mother of Jesus, holding his lifeless body in her arms as she kneels on the ground in despair. This masterful work statue was commissioned for the French Cardinal Jean de Bilhères.

It is said to be one of the most detailed sculptures ever created and students, as well as scholars and other experts agree that Michelangelo’s ability to craft the gently-flowing robe and other areas of the sculpture is what makes it a true masterpiece.

The sculpture was carved from Carrara marble and was originally intended to sit atop the cardinal’s funeral monument, but was instead moved after receiving such high praise after it was completed. It is the only work that was ever actually signed by Michelangelo and now sits in Saint Peter’s Basilica in Vatican City.