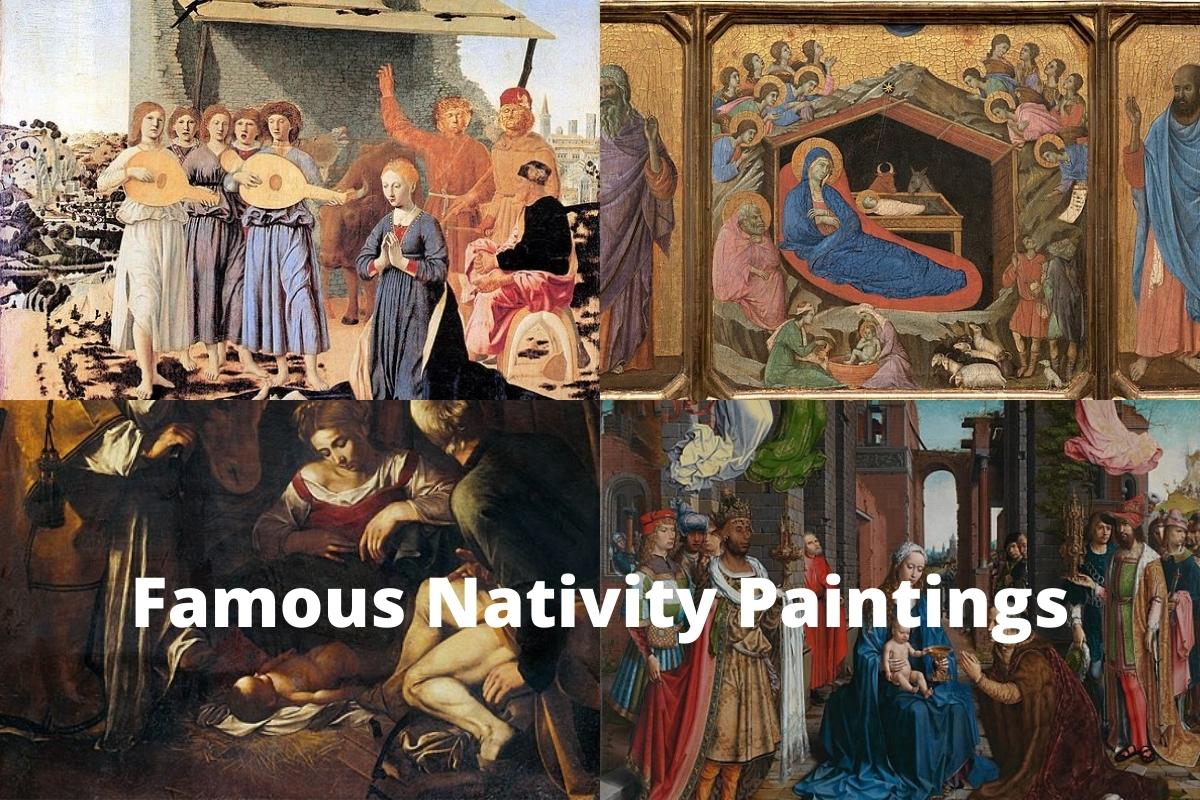 The Christian religion has long been tied to art movements that have taken place in Europe and in the Western Hemisphere. Since the Italian Renaissance, artists have used their skills to portray various elements and themes related to the Christmas holiday that occurs in late December.

While certain cultures have changed the ways they celebrate Christmas, some of the most important parts of the holiday still remain.

The Nativity scene is perhaps the most iconic part of the actual Christian celebration of the Christmas holiday. The image of the Virgin Mary, Joseph and baby Jesus is one that’s been depicted in paintings, film, sculpture and other mediums throughout the world.

We’ve selected 10 of the most famous Nativity paintings ever created and compiled them in this article to explain more about their origin and the artists who painted them.

Caravaggio is one of the most celebrated artists from the Baroque era which took place in the 17th century across Europe. Many of his paintings include a very high contrast between light and darkness which is meant to signify good and evil.

Caravaggio is known to have painted a number of religious works and one in particular is centered around the birth of Jesus Christ.

The painting is titled Nativity with St. Francis and St. Lawrence and was completed in 1600 at the peak of Caravaggio’s career.

It features the characteristic light and dark contrast that was so common with Caravaggio’s paintings, as well as two of the more well-known religious figures from the Catholic church at the time the work was painted.

The painting was on display at the Oratory of Saint Lawrence in Palermo, Italy when it was stolen in 1969. Authorities that have investigated the matter suspect the theft was the work of the Sicilian mafia, but the painting has not since been recovered.

Dutch painter Hugo van der Goes was famous for his ability to portray religious scenes from the Bible. Many of his most prominent paintings have been placed at the altarpiece of different churches throughout Europe since the 15th century.

Van der Goes created one work that depicted the Christian Nativity scene in 1476 which was intended to be serve as an altarpiece.

The work is titled Portinari Altarpiece and is one of the famous triptych works that van der Goes did during his career.

This painting features most of the characters that were associated with the Biblical story of Christ’s birth, but the Flemish artist also included a few prominent religious figures from the time period in which the work was done.

This painting was done in the same style as most other works from van der Goes and looks similar to other artists’ works from the early Renaissance era.

His works began to be noticed by art scholars and critics studying the Italian Renaissance during the 19th century.

One of the more talked-about works that is credited to Botticelli is titled The Mystical Nativity. This 1501 painting depicts a three-layered work that was quite common for this time period.

It features the typical Nativity scene in the center while angels and light circle overhead.

There are also angelic beings painted at the bottom third of the work. The infant Jesus, as well as the Virgin Mary and Joseph are featured in a cave that served as a makeshift manger that was mentioned in the Biblical story of Christ’s birth.

4. The Adoration of the Kings – Jan Gossaert

Jan Gossaert was one of the first artists of Dutch nationality to have traveled to Italy during the early Renaissance period and become part of the overall movement itself.

Gossaert was extremely talented when it came to depicting the human form and other figures with incredible detail. This gift for portraying figures in great detail would be showcased in one of the artist’s most famous paintings that was done some time around 1515.

Titled The Adoration of the Kings, this work was often thought to have been painted by a German artist by the name of Albrecht Dürer.

It wasn’t until very recently that art historians and scholars took a much closer look at the painting and realized that it might have been a collaborative effort on behalf of Dürer and Gossaert.

Some art historians believe that the work was solely painted by Gossaert as it features much of his handiwork in the brushwork and shadows of the Nativity scene. If you look very closely, you can see Gossaert’s signature along the rim of the cloak collar of one of the shepherds depicted.

One of the more unique depictions of the Nativity that’s described in the Bible is credited to Piero della Francesca.

This artist was born in Tuscany and would shape the early Italian Renaissance efforts by producing numerous works that featured very colorful and bright depictions of Biblical stories and settings.

One of his more famous paintings is simply titled The Nativity and was completed in 1475 when the Renaissance era was just getting underway across much of Italy.

This portrayal of the Nativity scene is one that’s much brighter than most others, which show the infant Christ surrounded by a dark, lonely manger.

Piero della Francesca’s version of the famous Nativity story shows the same figures from the Biblical account staged in a Tuscan landscape. There are also elements of Tuscan culture intermingled into the work as part of the artist’s effort to put his own twist on the story.

6. The Nativity with the Prophets Isaiah and Ezekiel – Duccio di Buoninsegna

Another famous triptych painting of the Nativity scene that was done on wooden panels was painted by Duccio di Buoninsegna. Di Buoninsegna was famous for creating some of the earliest religious paintings that are still in existence today.

He lived during the late 13th and 14th century and painted works in a way that would later influence some of the artists who started the Italian Renaissance.

The artist’s work titled The Nativity with the Prophets Isaiah and Ezekiel is remembered as one of the more famous depictions of this famous scene that details the birth of Jesus.

It’s certainly one of the earliest-known portrayals of the account and features di Buoninsegna’s characteristic gold leaf embellishment.

The painting also features a number of the same Biblical figures you might have come to expect in a Nativity painting, but it also has depictions of many angelic beings and what is thought to be religious figures of the day.

7. Adoration of the Shepherds – Giorgione

Giorgione is one of the more mysterious figures from the Italian Renaissance as there are very few of his paintings that survive to this day. In fact, many art historians and scholars believe there are only six different works that can truly be attributed to this prolific artist who lived during the early years of the Renaissance era.

One of his most famous works is centered around the Nativity scene and the shepherds that came to visit the infant Jesus. This work is titled Adoration of the Shepherds and is believed to have been completed in 1510.

The painting is quite different from most Nativity paintings because it depicts the baby Jesus, the Virgin Mary and Joseph kneeling in front of a dark cave on the right side of the work while the Shepherds and a colorful, lush landscape fills the left side.

Another very early work that depicts the Nativity scene is credited to the famous Italian artist, Giotto, who lived during the late 13th and early 14th century. This painting is a fresco that was done some time around 1304 or 1306.

The work itself is titled Nativity, Birth of Jesus and features a simple, yet elegant scene that has the baby Jesus and the Virgin Mary at the center of the canvas.

Overhead, we see a band of angels celebrating the birth of the Messiah while the shepherds and Joseph are portrayed next to the mother and child, along with some livestock.

Geertgen tot Sint Jans was a well-known artist during the Italian Renaissance era that hailed from the Netherlands.

His career spanned the late 15th century and many of his more widely-celebrated works depict religious scenes from Biblical stories, as well as some of the events that took place in and around Italy during his lifetime.

One of the artist’s most iconic paintings is titled The Nativity at Night. The work is thought to have been completed later in his lifetime and is one of the few paintings of the Nativity story under the cover of darkness.

In the work, we see the baby Jesus illuminating the young Virgin Mary as she adores her child for the first time. The Shepherds and Joseph are also standing with their faces painted with light shining from the infant Christ.

Most of the entire canvas is very dark, but there is another figure in the upper corner that’s clearly an angelic being looking downward toward the young child.

10. Te tamari no atua (The Birth of Christ) – Paul Gauguin

Paul Gauguin is a famous Impressionist painter who spent much of his life in the French Polynesian islands where he created a number of his more iconic paintings.

Gauguin traveled to the island of Tahiti in 1890 in an effort to spark his creative side and capture some of the island’s rich and lush beauty that had been rumored in various literary works and newspapers of the time.

One of his more well-known Christmas paintings or the Nativity was titled Te tamari no atua, which in the native Polynesian language means The Birth of Christ.

This work is one of the most unique depictions of the famous Biblical account as it features native Polynesian individuals instead of the common portrayal of these figures as Hebrew or even European.