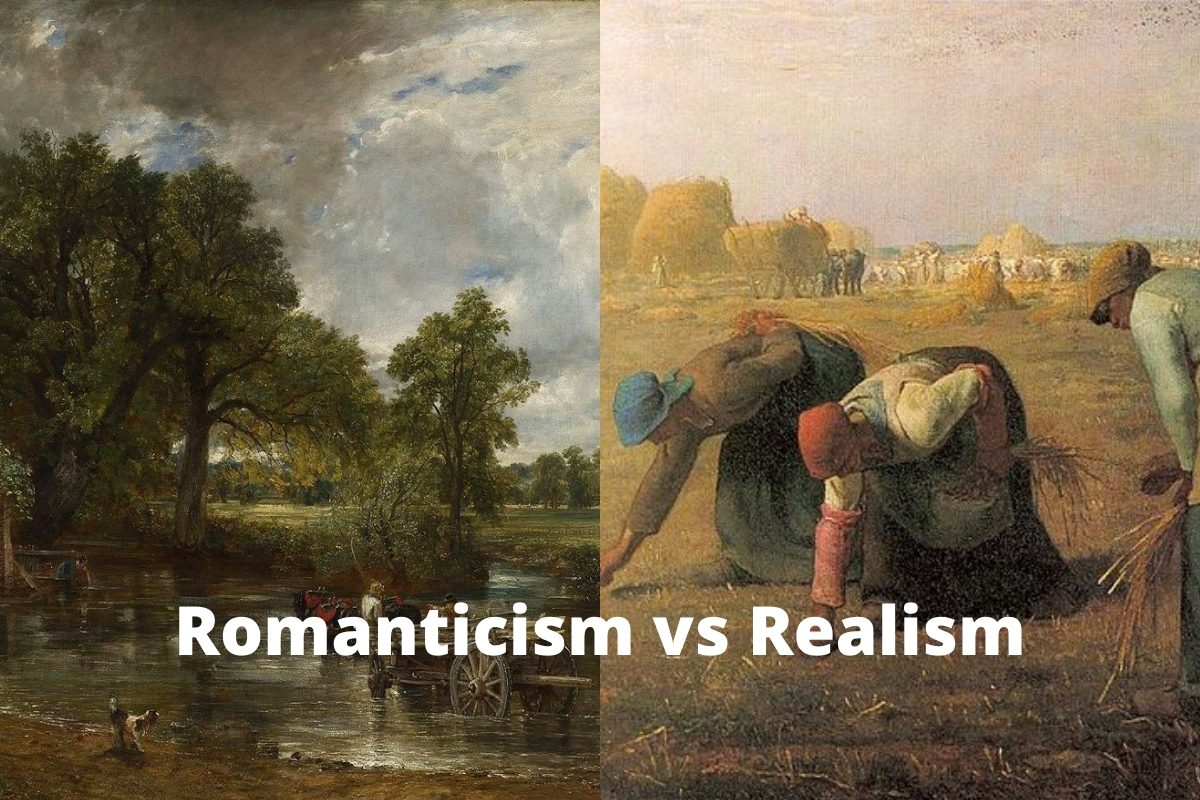 Few art movements had as much of an impact on the trajectory of art and painting since the Renaissance era as Romanticism and Realism.

These two art periods took place in the 19th century and were heavily influenced by the new and fast-evolving world that had been transformed by the Industrial Revolution.

Artists began to seek to capture the world around them with great accuracy while others sought to portray works that centered around one’s emotional connection to the world.

This newfound sense of Romanticism encouraged artists to paint works in which they would explore their own imagination and push the bounds of what was real and what was fiction.

In this article, we will explore both Realism and Romanticism as we take a closer look at the driving factors behind both art movements and why they became so popular during the 1800’s.

The main difference between Romanticism and Realism is that Realism pertains to that which was real often scenes from the lives of the lower classes while Romanticism was largely fictionalized and often portrayed scenes that were pure fantasy.

The first of these two art movements was Romanticism, which began in the first few years of the 19th century. The movement is thought to have been sparked by the poems of great literary figures like William Wordsworth and Samuel Taylor Coleridge, who penned masterful works of literary genius in the last few decades of the 1700’s.

These poems drew widespread acclaim for their framing of how the world viewed the poor, as well as nature and how everything was beginning to change with industrial growth in Europe.

The hallmark of Romanticism was that the artist was free to express themselves in whatever way they pleased. It was a movement that was defined by the spontaneous and exploratory measures of artists who worked with the pen, as well as the paintbrush.

The Romanticism era would emerge in art form in England and would soon take hold in Germany and other nearby countries as well.

Some of the first paintings of the Romanticism era were focused on landscapes or seascapes in which painters would create a scene that would involve humans and animals.

These scenes often invoked images that were Gothic in nature and seemed to bring back various themes and figures from Greek or Roman mythology.

Many artists would portray their modern-day figures and landscapes with a distinctive mythological twist with women appearing like robed goddesses and men having the muscular physique that was common among portrayals of Greek gods.

Romanticism revived the sense of religious or nationalist themes by using these embellished methods of depiction that invoked Greek or Roman mythology in their paintings.

The result was a litany of works that were beautifully dramatic and told the story of just how the artist felt about a certain idea or event.

Realism didn’t truly emerge until the mid-19th century when the Industrial Revolution had begun to pick up considerable steam throughout Europe.

Romanticism had been the dominant form of artistic expression throughout Europe for a couple generations and artists were very much growing tired of the same over-the-top style of portrayal and classical imagery that was common.

Realism broke through this fanciful style of depiction and presented the world exactly as it was.

Most artists quickly realized that by painting the world around them in exact, accurate detail, they would be creating works that had truly never been done before because much of the industrialized world had never been captured in paintings.

Photography had not come about yet and it was painters who first sought to capture the world around them in a way that documented people, places, things and events in a way that told a story to those who were viewing these works.

The artists who worked during this Realism period can be very closely compared to journalists in that they felt a strong sense of duty to their fellow man to display certain scenes or subject matter in a way that gave viewers an honest and accurate view of them—regardless of how the artist felt about them.

This was very much a novel approach that grew like wildfire across Europe and in the United States.

As Realism grew and changed, artists would move further away from portraying the more pleasant scenes of European and American cities and landscapes and move closer toward depicting the world in all its grandeur, as well as paltriness.

After Realism had been around for a few decades, artists had increasingly moved toward painting scenes of hardship and despair that plagued the poor and disenfranchised class of people that were so often neglected by the public as a whole.

Major Differences in Romanticism and Realism

Romanticism came about through artists pursuing their own desire to push the boundaries of emotional expression in their paintings.

The Romanticism era was defined by a deep affinity towards nature during a time when the industrial world seemed to creep into every part of life for Europeans and Americans.

This industrial complex is tied to the worldly view that man must rely on his own skill and prowess in order to advance himself and his fellow humans.

Romanticism, however, turned that view around and placed much more emphasis on nature as the most powerful force in the world. Many of the paintings that came from the earliest years of the Romanticism movement involved depictions of vast swaths of natural landscapes.

Many of these landscapes were painted as experiencing a strong weather event like a storm, wind, or rain. This addition of harsh and powerful weather was meant to further emphasize that it was nature—not man—that was the most powerful force in the world.

Romanticism embraced the idea that man was at his best when he was closer to nature. The farther humans got from nature and the closer they drew towards their man-made industrial centers, the more depressed and melancholy they would become.

Artists from the Romanticism era used nature as a symbol of good while the industrialized world was representative of man’s less desirable characteristics.

Realism emerged from the Romanticism movement as a means for artists to embrace the truth about the world around them instead of pushing a belief system that would become more fantastical as the movement went on.

Realism offered the opportunity for artists to paint their subjects and scenery without the pressure of embellishing it with their own emotional connection or lack thereof. Instead, artists were encouraged to capture the world around them just as it looked in order to show others what the world really looked like.

According to many art historians and critics, this era of Realism was long overdue and was very much a breath of fresh air for artists who had long studied many different art movements and styles.

These previous art movements always involved placing great importance on the need to include the artist’s own emotions and views into the subject matter.

The most prevalent of these previously-hidden aspects of society was how hard life actually was for the poor. Artists saw their ability to paint the lives and activities of the poor as a means to shine a light on their plight and hope to spark some sort of change that would bring them out of poverty.

There had never been two art styles of movements that were essentially so different in both philosophy and actual portrayal as Realism and Romanticism.

As many art historians have noted, Realism is an era that would go on to inspire many modern artists to focus on depicting subjects in an effort to improve human existence and eliminate poverty.

This shift from the imagined to what was real is one of the most drastic changes between two art movements in history. Much of today’s efforts to eradicate poverty and hunger in the world can be directly tied back to the Realism era artists and their desire for change.