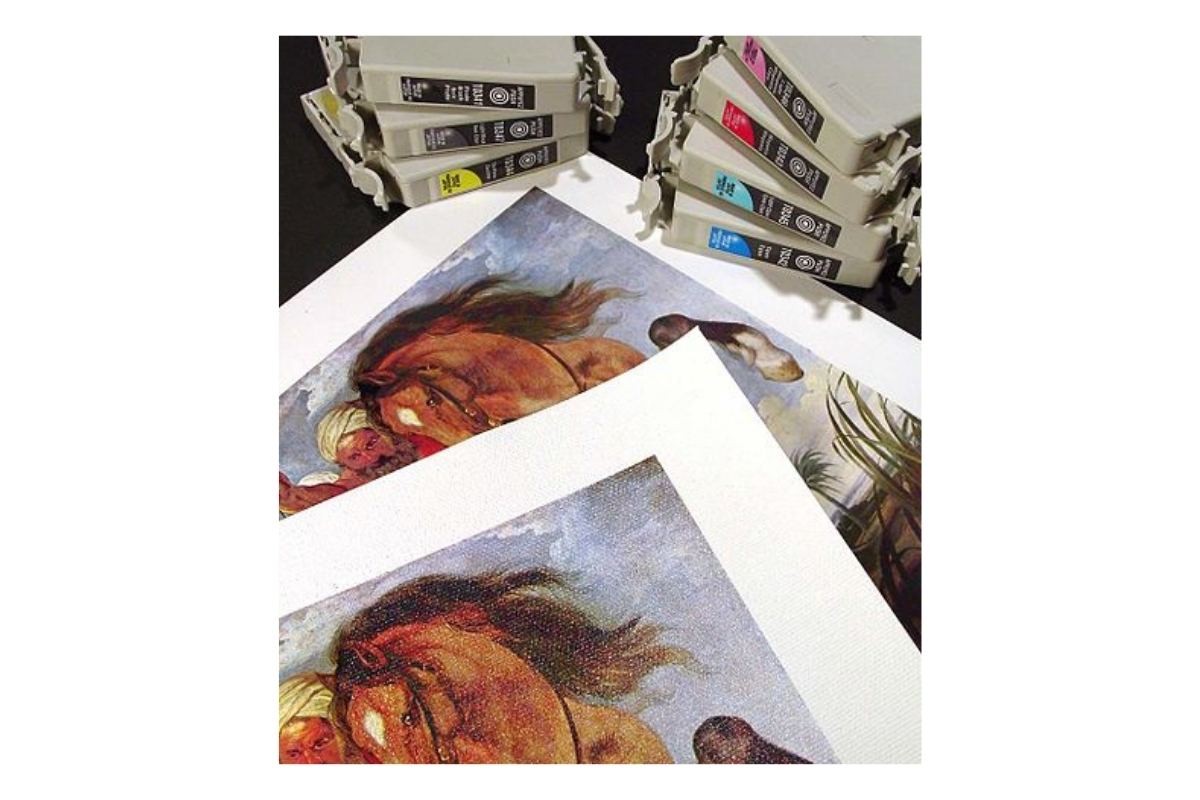 A Giclee is a print that is produced on an inkjet printer that allows an artist to make an exact replica of their original piece.

Although their are a variety of other printing processes that are used in the art world it is the Giclee that is the most accurate and also allows the use of high-end fade resistant dyes.

The printers used will tend to have a higher amount of different color cartridges which in turn leads to higher quality images and the availability of a broader spectrum of colors to work with.

What is a Giclee Print?

In literal terms, the word Giclee is French and means “to spray”, the word refers to the process of an inkjet printer being used to create this particular type of art.  A Giclee Print is an art print of a given work that comes from an inkjet printer as a means to create an exact image of that artwork.

It is the only kind of art replica that hails from an inkjet printer.  As we mentioned, the name Giclee itself is translated into English as “to spray.”  This is precisely what an inkjet printer does.  It sprays the ink onto the material.

There may be other types of printed artwork on the market; however, a Giclee comes directly from an inkjet printer.  No other type can make that claim.  The claim that this type of printer creates exact replicas of a piece of art is also true.  This is why a Giclee has become so coveted.

Do Giclee Prints Have Texture?

The answer to this question is multifaceted in that these prints do not have a raised texture that someone would associate with an original painting.  Yet, it must be noted that some artists produce Giclees using the same kind of canvas that an original painting would be on.

Therefore, the canvas itself will have a rough texture compared to the texture on a piece of paper.  It should also be explained that a few kinds of material can be used to create a Giclee Print.

A printer that is utilized for a Giclee is one that features special pigments rather than dyes.  It then squirts these dyes onto fine art quality materials such as a canvas, a sheet of 100% cotton paper, or a rag made of linen.  This combination of pigments and quality materials results in a long life for the print including colors that are resistant to fading.

In a traditional art print, the same sort of artistic quality is involved.  However, there is only a limited quantity of prints that are marked by a number and signed by the artist.  In literal terms, an art print is a reproduction of a particular art item.  With this type of print, the artist remains in control of his or her work.

Where to Get Giclee Prints Made?

Your best bet is to look up this topic on the Internet.  You should be able to find individual artists and, as an alternative, Giclee galleries or studios.  With the increasing popularity of this art form, locating items to buy is easier than ever.  You might begin with the source in which you found this blog.  They can at least point you in the right direction.

Stemming from a process by which an American printmaker named Jack Duganne back in the early 1990s, there is a special way the ink is used in conjunction with unique material to produce the prints.  You cannot just throw together the ink plus the materials.

Somebody who wants to create Giclee Prints must know which supplies to use and how to properly apply them.   More than that, you need to have a vision of what you want your creation to look like.  Other things you must learn are the three different types of Giclee Prints as well as all the techniques that are included.

How to Price Giclee Prints?

his section can be useful to either art enthusiasts or budding Giclee artists.  How do you arrive at the price of a print?  Generally speaking, they cost far less than an original or a traditional art print.  An estimate is usually given at one-third the cost of an original.

So, as an example, if your original is priced at $3000, a Giclee Print of that would average $1000.  It is at the discretion of the artist.  If he or she wishes, they are able to charge more or less than that.  Art connoisseurs feel they are worth every penny, no matter what they sell for.

Capturing the True Essence of a Giclee

What does this mean?  It means when an inkjet printer is used to create a Giclee Print, it will display a vast array of colors.  It can capture every facet of the original piece of art it recreates.  Sometimes an artist will incorporate oils, watercolors, acrylics, or textiles in his or her Giclee.

The primary reason to purchase a Giclee instead of an original painting is the cost.  Its price will be far more modest and affordable for those people with limited financial means.

Becoming a Giclee Printer Yourself

If this topic intrigues you, perhaps you are now considering becoming a Giclee Print artist.  You are in luck in that it does not cost nearly as much to produce as either an original or a traditional art print.  They are also becoming quite popular with the public which has garnered the attention of art galleries.  A Giclee is primarily produced when somebody has one commissioned.

It has to also be conveyed that you do need to have some experience in producing Giclee Prints.  It takes time and patience to learn this craft.  It is NOT something you can merely throw together and expect to have success.  There are many nuances that go into this niche of the art world.  Proper training is required.