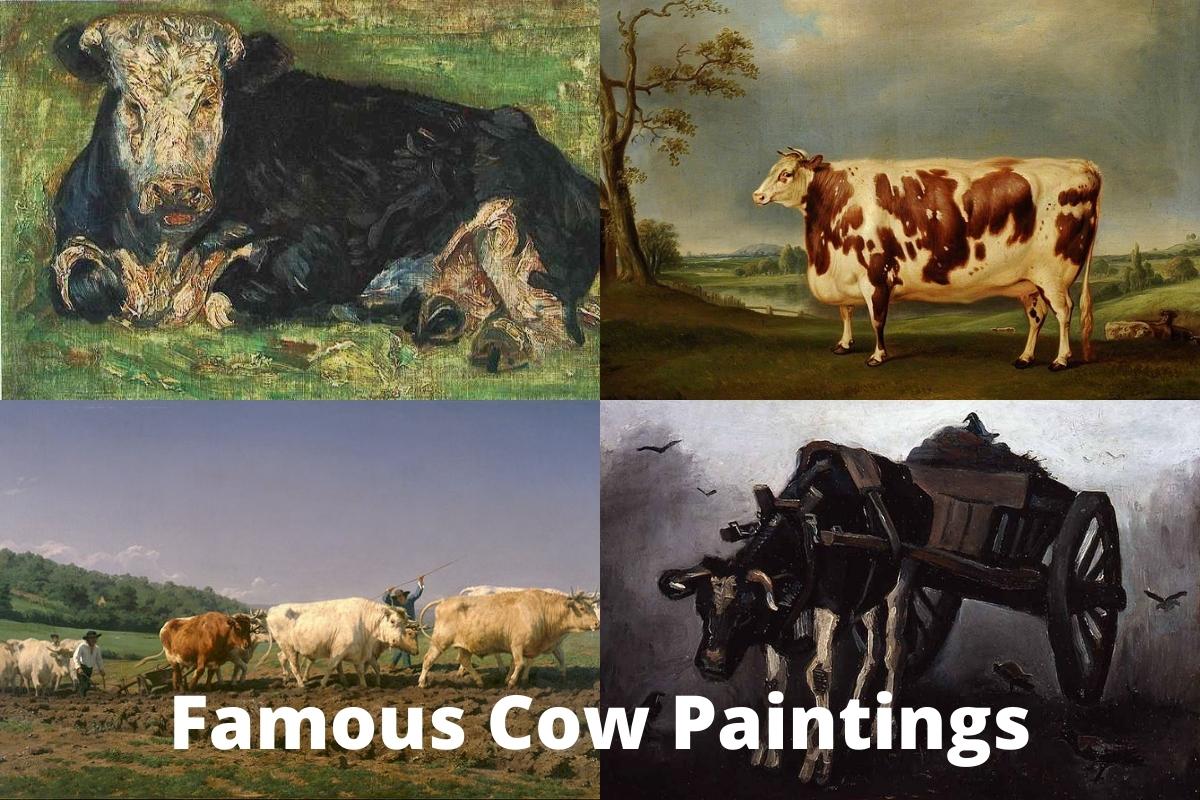 Cattle have long been a part of human history throughout much of the known world. A cave painting from up to 40,000 years ago still stands in Borneo and represents depictions of humans and cattle that many historians point to as the earliest form of figurative artwork in history.

In fact, there are many other cave paintings strewn throughout the world that portray humans and cattle.

In recent modern history, cattle have also been the focus of some prominent artists. Many artists have sought to depict the necessary relationship between cattle and humankind in various forms.

These artists lived in areas where poor farmers relied on cattle to survive and help them in a variety of ways, which any artists have successfully depicted in their works.

Here are 10 of the most famous cow paintings ever done.

1. Peasants of Flagey Back From the Fair – Gustave Courbet

Gustave Courbet was a Realism painter who was born in Ornans, France in 1819. During his lifetime, the people of metropolitan centers like Paris typically looked down on the poor working population from surrounding rural areas.

Courbet came from humble beginnings and depicted the harsh reality of life for many French people during this time.

His 1850 painting titled Peasants of Flagey Back From the Fair is widely considered to be one of the most famous paintings featuring cattle. It’s one that also drew considerable amounts of criticism when it was first exhibited at the Salon in 1851.

Many critics viewed it as having an unauthentic portrayal of what life is really like for farmers and rural French people during this time.

The painting features a group of farmers returning from the local fair. Led by two cows. There are men mounted on horseback who are likely to be owners of local farms who travel to such a fair to buy and sell livestock.

The painting is remembered for representing people who are of a lower societal position than most of the people that resided in Paris and its surrounding cities.

Rosa Bonheur was a 19th century painter who focused much of her work and career on painting animals. She also drew some acclaim as a sculpture, but some of her most notable works feature scenes which depict livestock in some form or another.

Bonheur was fascinated with animals and the dynamic between humans and species like cows, which are clearly one of the most valuable types of livestock.

One of her most notable paintings is titled Ploughing in Nevers. This work was completed in 1849 and contains a high level of realism in almost every aspect.

The colors are vividly depicted and the shadows cast by the blazing sunlight are also very masterfully done.

Bonheur gives her viewer the perspective that one might have if they were standing in the field watching the team of oxen drive along and till the soil.

The painting is arguably one of the most famous ever created that features cattle.

Many art historians and critics note that the painting was awarded a First Medal when it was displayed at the Salon in 1849 and the work has stood as one of the most famous artworks depicting farm life ever done.

Vincent van Gogh is remembered as one of the most celebrated artists in history and is credited for being one of the most prominent members of the Post-Impressionist movement.

Many of his most well-known works focus on nature in some form or another and he rarely painted scenes of farming or other activities like it.

One such work that is considered to be among the more rare types of van Gogh paintings is known as Lying Cow.

This 1883 painting was one of two paintings done by the famed artist while he was living in The Hague with a mistress named Sien Hoornik. Van Gogh left her and departed for the Netherlands in the same year, leaving these two paintings behind.

This work is famous, not only for having much of the characteristic brush stroke work that van Gogh was famous for, but also for being a classic Impressionist painting that is one of the more rare van Gogh paintings ever created.

Jean-François Millet is recognized as being one of the most well-known painters from the Realism era that took place throughout the 19th century in Europe.

Many of his most prominent works feature landscape scenes while a number of them depict lower class people engaged in their normal work routines. Most of these paintings focused on farming as this was a crucial part of life during the 1800’s.

Millet painted one work that is remembered as one of the most highly regarded cow paintings ever created. Simple and straightforward, the painting titled Woman Milking a Cow depicts a woman seated, milking a cow as the morning sun peeks over the horizon and illuminates the hillside in the background.

The viewer can see a number of other cows scattered across the hill and it is likely to be a scene that was very common in France during the time it was painted in 1854.

Peter Paul Rubens is remembered as one of the most famous members of the Baroque movement, especially in his home country of what is now Belgium. He lived during the 16th and 17th centuries when farming and cattle were staples of virtually any community across Europe.

While Rubens is credited with painting a number of religious scenes, as well as many others that depicted figures from Greek and Roman mythology, he did a few works that portrayed a more simplistic view of the world around him.

One of his paintings is an easy addition to our list of cow paintings and was created in or around 1636 near the end of Rubens’ lifetime.

The painting is titled Landscape with a Rainbow and features a sprawling countryside that’s bordered with mature trees. People are seen working alongside their cattle as a large, colorful rainbow stretches out overhead.

Julien Dupré was a French painter who lived and worked during the Realism era that took place during the mid-to-late 19th century.

He mostly focused his efforts on creating various scenes from rural life that most artists in Paris and other metropolitan hubs rarely saw during their lifetimes.

He is credited with being able to portray people working in various conditions that might be unpleasant to the common Parisian, but was simply life as usual for rural French individuals.

One of these paintings is titled The Young Milkmaid and was completed in the late 1800’s during the height of Dupré’s lifetime. The work features a young girl standing alongside a dairy cow. The girl is seen holding a milk jug that she is likely preparing to fill.

He would paint many such scenes of The Young Milkmaid or “Le Jeune Laitière”.

The painting, like many others that this artist had done, features gentle colors and bright lighting that seems to emphasize a sense of purity and natural life associated with farming and cattle.

Following Vincent van Gogh’s departure from The Hague in 1883, he seemed to carry with him some fascination or focus on farm life.

He was living in Nuenen, Germany one year later in 1884 when he created one work that is easily the most famous van Gogh painting that centers around farming.

The painting is titled Cart with Black Ox and depicts a small, somewhat skinny cow attached to the cart with a harness. The cow looks young, but also seemed to be weighed down with the cart.

The painting’s overall tone is very dark and it is believed among art critics and historians that van Gogh was aiming at depicting the realities and harshness of life in some farm communities.

Van Gogh painted a few more work that were somewhat similar, but most of them seemed to have the same dark overtones that this painting features.

Van Gogh described the small village of Nuenen as being ‘disquieting’ and he didn’t seem to be very fond of the way most farmers treated their livestock.

Little is known about the artist named Thomas Weaver other than the fact that he was born in 1743 and lived most of his life in Britain. He worked during a time when most artists were focusing on various types of artwork that would later give birth to the Realism era.

Weaver is not an artist with an extensive background and numerous works, but what we do have from him shows that he held some fascination with rural farming life.

His painting titled A Brindled Shorthorn Cow, Bred at Calke is a somewhat strange and curious depiction of a cow that many critics describe as being a bit distorted for some unknown reason.

The cow’s head is much smaller than its body, which seems to indicate that Weaver may have been trying to communicate a sense of disgust or displeasure with the fact that many farmers sought to use various unnatural methods to fatten their cows before they were to be sold at a market or fair.

Dutch painter Paulus Potter was known as a prominent artist that lived during the late 17th and early 18th century. He had a fascination with landscapes and also created numerous works portraying a variety of animals in different circumstances.

His works depict a very fresh and realistic tone that drew widespread acclaim from various art critics and fellow artists at the time.

One work in particular that Potter did focuses on a small group of cattle and sheep that are seen bedded down on a hilltop. The sky is overcast and the painting doesn’t have the same glow of sunlight that many of Potter’s works depicted.

The viewer can see a young bull standing near the tree with an old farmer standing opposite the cow, tending the animals in what seems to be an instant where an oncoming storm is quickly approaching.

Regarded as one of the most prominent figures in the Impressionist movement, Camille Pissarro developed quite a reputation for painting everything from portraits to cityscapes, as well as many different scenes from rural life.

His paintings seemed to have a very gentle, welcoming sense to them and it is believed that he had a fondness for the simple nature of life in a farming community.

One of his lesser-known paintings is a work that has drawn some attention from critics and historians as one of the more masterful paintings featuring a cow.

Titled Girl Tending a Cow in Pasture, this 1874 painting depicts a sunny, pleasant scene in which a girl is seen holding the reins of a haltered cow that’s grazing along a hillside. The viewer can see a group of women harvesting crops in the background.