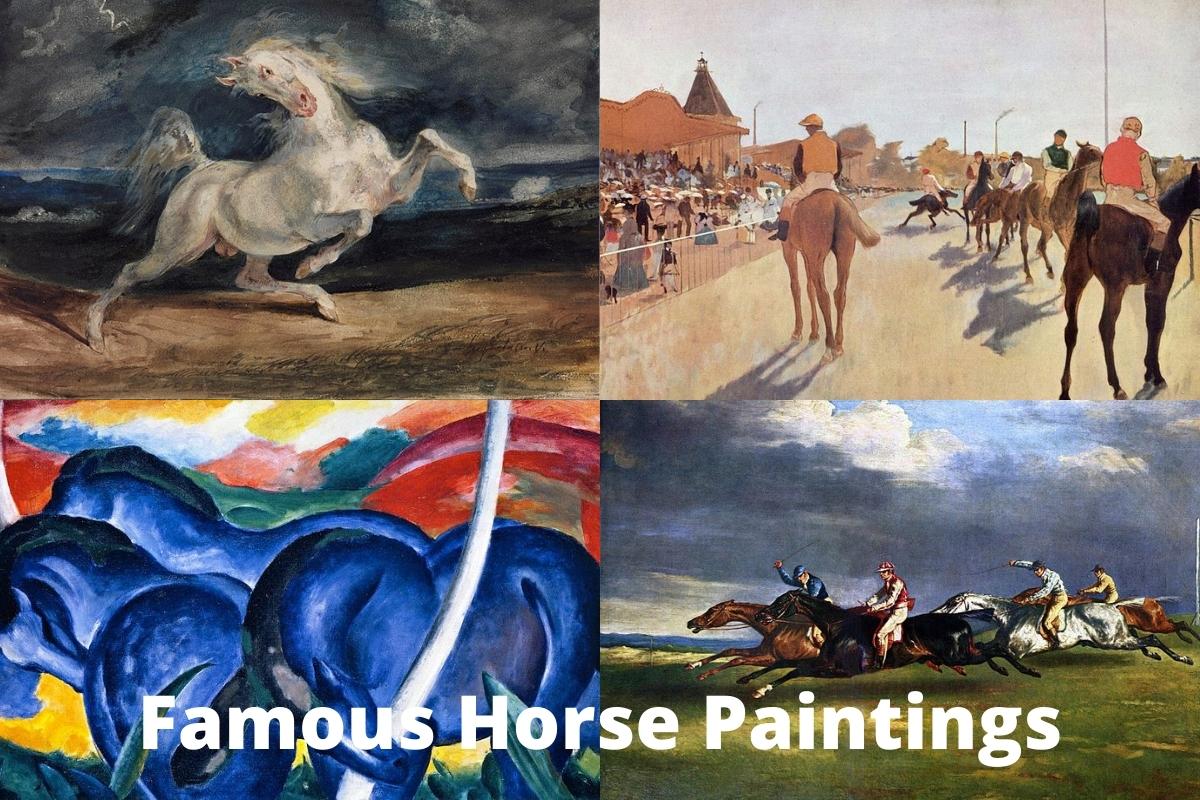 Horses have played a major role in human development and history for thousands of years. It’s believed that the horse was first domesticated by certain nomadic cultures that lived in Eastern Europe as many as 3,000 years ago.

Horses quickly became the most prominent means of transportation for much of the world up to 1,000 years ago across Europe and Asia.

As one of the most unique animals in the world, horses have long been admired for their beauty, as well as the fact that they are intensely loyal to humans and are one of the most intelligent domesticated animals on Earth.

Artists have sought to portray this relationship between humans and horses for many centuries. With so many different breeds and varieties of horses, it’s understandable why many painters might seek to depict these majestic animals in various forms that include their natural and domesticated state.

Here are our selections for the most famous horse paintings ever created.

Horses are one of the more iconic animals in the world simply due to the fact that they are used for a variety of different purposes. These include military ventures, farming, basic transportation and other tasks that horses excel at and greatly increase our ability to cover more ground in a much more efficient manner.

The most iconic horse painting ever created is arguably one that was painted by George Stubbs. Unlike most other artists, Stubbs was a self-taught painter who learned how to produce exceptional artwork by viewing other works from prominent artists in his early life.

The British painter had a special affinity for painting horses and created many different works throughout the 18th century of horses in various poses or actions.

His 1762 painting titled Whistlejacket was easily Stubbs’ most popular work and it’s one that critics and scholars both point to as one of the most famous horse paintings ever done. The animal in the painting was a prized racehorse owned by Marquess of Rockingham.

The work was done on a massive canvas that was nearly life-sized and featured a solid background that puts all of the viewer’s focus on this famous racehorse.

Rosa Bonheur was a prominent female artist in France during the 1800’s when many of the most highly-esteemed museums and academies discouraged women being artists.

She came from a family of prolific artists and showed considerable promise at a very young age when it came to sketching and drawing simple objects. She would develop a special talent for drawing animals and was considered to be one of the greatest animal artists from the Realism era during the mid-19th century.

One of her most famous works is titled The Horse Fair and is easily one of the most famous horse paintings ever produced. Completed in 1853, it was exhibited at the Paris Salon that same year and received high praise from most everyone in attendance.

Bonheur made some minor additions to the painting a few years later in 1855 and the work has remained one of the most distinguished pieces of artwork from her lifetime.

Painted on an exceptionally-large canvas, Bonheur’s work depicts a lively scene in which beautifully-groomed horses are paraded across a field toward the fair where they were taken to be bought and sold.

The scene is said to be virtually identical to that of the Paris horse market at Boulevard de l’Hôpital during this time period.

Napoleon Bonaparte was the most powerful figure in the late 18th and early 19th century across Europe. His armies had managed to conquer much of the territory of the continent and Napoleon pulled off certain feats that seemed unfathomable at the time.

One such military victory was the famous general’s incursion into the Swiss Alps in his efforts to reinforce his troops in northern Italy.

This action was viewed as one of the most incredible military maneuvers of the century and Napoleon’s decisive victory over his enemies in the region was the catalyst behind our next horse painting. Titled Napoleon Crossing the Alps, this particular work done by Jacques-Louis David was one of the artist’s most celebrated paintings.

David’s painting features Napoleon mounted on a warhorse as he leads his men toward the snow-capped peaks of the Swiss Alps.

His troops and cannons can be seen in the background marching up into the rocky abyss that no other major army had ever trekked through during winter.

Théodore Géricault was one of the most prolific painters during the early 19th century in France. He created such masterpieces as The Raft of the Medusa and many others that were viewed as captivating works of brilliance.

The artist was said to have been especially drawn to horses and their graceful movements. Géricault even worked in the royal stables in Versailles for a short period of time where he became much more acquainted with the different types of horses and their purposes.

One of his most well-known paintings from his short lifetime was called The 1821 Derby at Epsom. This work depicted an intense horse race across an open prairie with four jockeys bunched together in a tight pack.

Géricault was an avid rider himself and it is said that his declining health toward the end of his life was due to experiencing multiple serious riding accidents which he sustained from either racing horses or riding at breakneck speeds in dangerous conditions.

This painting is one of the most iconic works depicting a horse race to have ever been created. It was painted for a famous English horse race owner and portrays one of his most celebrated mounts winning a tense race through the English countryside.

John Collier is one of the most celebrated English painters from the late 19th and early 20th centuries. He is known to have created a number of works that depict various historical events and legends from his native England.

One such painting is among his most notable works and features Collier’s own interpretation of the story of Lady Godiva.

The painting, which is titled Lady Godiva, centers around an image of the well-known wife of a 13th century Earl of Mercia. According to legend, she rode naked through the streets of Coventry to protest a heavy tax that her husband, Leofric, had levied on the people.

The painting contains a highly-realistic depiction of the event and includes the image of Mab Paul, a prominent model and theater actress from the time period. She is seen mounted atop a white stallion that’s fitted with a royal robe, saddle and halter.

Eugène Delacroix was regarded as one of the most prominent figures from the Realism movement in France during the early 19th century. He is known to have painted a number of works that include horses near the sea shore or in other scenes from the 1800’s.

One of his more well-known works that solely features a stallion was done sometime in the mid-to-late 1820’s and is believed to be inspired by a work from Théodore Géricault.

Titled Horse Frightened by a Thunderstorm, Delacroix’s painting presents a blackened sky that’s illuminated by sudden bolts of lightning that flash in the clouds.

A majestic stallion is depicted as being terrified by the violent storm as he is rearing up in reaction to the lightning and thunder of the storm. The painting is one of the few watercolors that is known to have been done by Delacroix during this time period.

Many artists sought to depict the world around them in a more abstract and surreal fashion during the early 20th century. One such artist was Franz Marc, who was a highly-celebrated painter from Germany.

Marc was known for producing works that contained vivid and brilliant colors and one of these masterful paintings is remembered as one of the more famous horse paintings from recent history.

The work is titled Blue Horses and is aptly-named as Marc portrayed the animals as having a deep, royal blue coloring set against a colorful background that featured reddish hillsides and yellow-orange clouds.

Created in 1911, this is one of the more memorable works from Marc’s career before his life abruptly ended at just 36 years old when he was killed at the Battle of Verdun.

George Stubbs’ affinity for horses was evident in many of his paintings which feature various stallions and steeds of all kinds.

In addition to painting many different works depicting a calm, serene setting with horses grazing next to a placid lake or along a green hillside, Stubbs also produced a series of works that portrayed a more violent theme in which a lion is attacking a horse.

The artists created several works in this series that are known under the same name, A Lion Attacking a Horse. These works were painted sometime in 1762 and 1763 and each feature a gripping scene in which the king of the jungle is seen pouncing on or locked in a struggle with a horse.

These iconic paintings were part of the earliest works that art critics and scholars consider to be the first Romantic paintings from the English artist.

Edgar Degas is remembered as one of the greatest artists from the Impressionist movement. Many of his famous works center around somewhat unconventional scenes and figures that many critics deemed unworthy of the attention from such a talented artist.

Degas did paint many other works that were viewed as masterpieces during his lifetime.

One of his most famous works is known as The Parade, Race Horses in front of the Tribunes, 1868. This painting features a number of thoroughbred racehorses preparing to run at a well-known horse racing track.

The work is famous among art critics as one that features Degas’ ability to create a work that masterfully displays the sun’s lighting effect on a scene in a way that was characteristic of the artist.

This painting is an iconic work that is often copied and displayed in and around horse racing circles in both Europe and the United States where the sport is very popular.

Cubist artists often worked with scenes and subjects that were common to their audience, but portrayed them in a way that displayed their main subject in a variety of angles.

Jean Metzinger was widely recognized as a master among Cubism artists during the early 20th century when the movement had just begun to pick up steam across much of Europe.

One of Metzinger’s most highly-celebrated paintings that features a human and animal figure is that of La Femme au Cheval.

This 1912 painting is also known as Woman with a Horse and was exhibited for the first time in Paris at the Salon des Indépendants the same year Metzinger completed it.

This painting received high praise from critics and viewers alike for its ability to show multiple aspects of the main figures in the painting at the same time.

This concept was part of the main tenets of the Cubism movement and was what established Metzinger as one of the founding fathers of the Cubist era, which lasted well into the late 20th century.