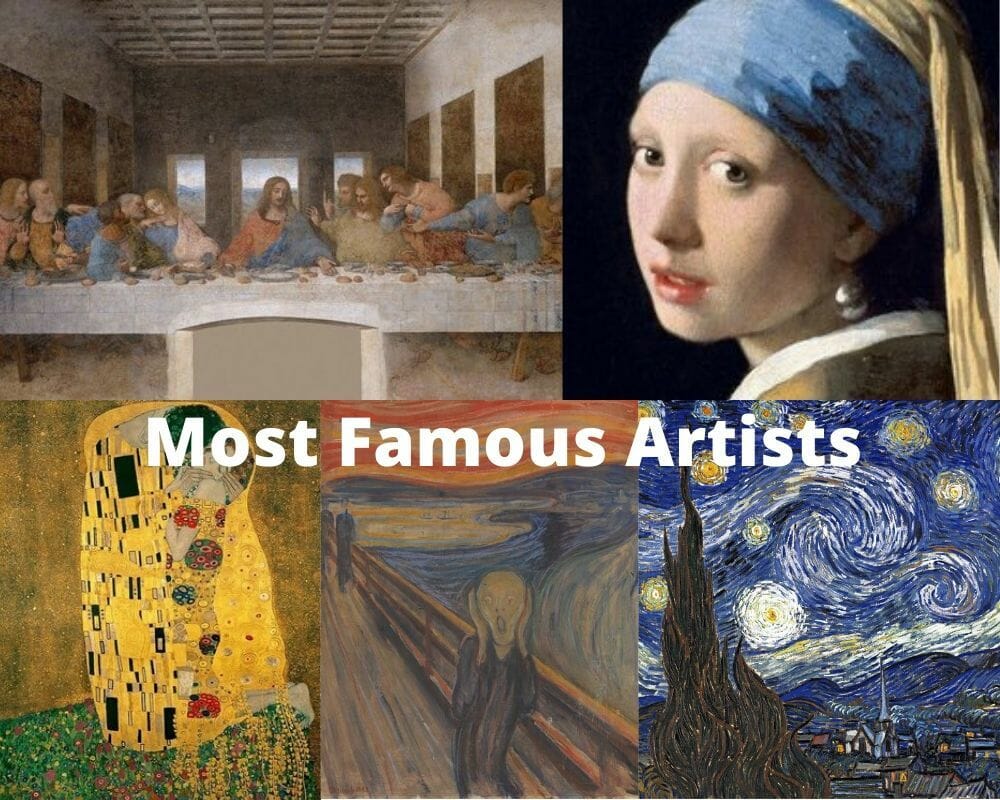 What makes some artists famous and others fade into obscurity? The most famous artists are the ones that capture a time, a place, an idea or spear head a new artistic movement.

Our list of famous painters contains some of the most genius minds to ever exist.

Their art has stood the test of time and adorn galleries the world over with many of their works worth hundreds of millions of dollars on the rare occasions that they come up for auction.

Very few artist names are more recognizable than da Vinci he towers above all other artists with a seemingly endless almost supernatural talent.

Leonardo da Vinci, whose interests encompassed everything from painting to architecture, anatomy, and engineering epitomized the renaissance man.

Due to his many endeavors and despite his fame, da Vinci was not a prolific painter, having less than two dozen paintings surviving over the centuries, but his love of science permeated his artistic work (e.g. Vitruvian Man).

Around fourteen years old, he apprenticed under Andrea del Verrocchio in Florence where he studied subjects like carpentry and drawing.

By twenty years old he qualified as a master artist at Florence’s Guild of Saint Luke where he established his own workshop but continued his apprenticeship with del Verrocchio for several more years.

After a successful painting career and paralysis of his left hand, da Vinci focused his later years on scientific studies until his death in 1519.

Michelangelo Buonarotti was regarded as one of the greatest artists of all time even while he was still alive.

Although he thought of himself as a sculptor, his artistic talents spread to painting, architecture, and even poetry, but sculpture was the one art form that remained a constant throughout his career.

Born in 1475, Michelangelo was less interested in formal schooling and more interested in church paintings from an early age. By the time he was thirteen, he began an apprenticeship with Domenico Ghirlandaio.

While it was supposed to last three, it ended after just one year because he had already learned all he could from Ghirlandaio, moving on to join the Humanist Academy in Florence.

After completing David in 1501, he secured himself as a respected artist and gained notoriety, leading to a successful career. Towards the end of his life, he abandoned his artistic ventures for architecture until his death in 1564.

Rembrandt Harmenszoon van Rijn, or Rembrandt, was born in 1606 in modern day Netherlands. As a master in visual arts, he is widely renowned as both a painter and print-maker.

Though he painted a wide breadth of subject matter, he was particularly fond of self portraits as well as biblical scenes. He is credited as one of the greatest painters of all time.

At fourteen years old, Rembrandt apprenticed Pieter Lastman in Amsterdam for six months. Afterwards, he opened his own studio in Leiden where he took on numerous pupils.

Though he made more than a modest income, he spent his money with wild abandon, leaving himself penniless most of his life.

Thankfully, he spent his money on art which mostly appreciated in value, allowing him to avoid bankruptcy by selling the art he had acquired over the years. Eventually he passed away as a poor man in 1669.

Johannes Vermeer, born in 1632 Holland, was a baroque painter known for his masterful use of pigments and light.

Although he enjoyed painting biblical and mythological scenes, he specialized in painting domestic interior scenes of the middle class lifestyle, often depicting the same scenes and individuals in multiple paintings.

One aspect of his painting that separates him from his contemporaries was his excessive use of expensive paints without concern in conjunction with his lack of preparations for each of his paintings.

Much of Vermeer’s life is left unsure, including whom he apprenticed under. Additionally, only thirty-four paintings are attributed to him today.

However, it is known that in 1653 Vermeer became a master, though he did not achieve wide success until after his death in 1675 where he has been known as one of the most famous painters of the dutch golden age.

Pablo Picasso, born in 1881 Malaga, Spain, is one of the most esteemed painters, in addition to printmaker, poet, and playwright, in history.

Throughout his life, he changed techniques several different times, making it difficult to pinpoint what his trademark style was.

In his early years, his paintings depicted colorful scenes of blue hues, whereas later it turned to blue-green hues that often depicted scenes of impoverished peoples.

Born the son of a painter, Picasso’s father taught him what he knew until Picasso had surpassed him. At fourteen years old, his family moved to Barcelona and he was accepted to the local fine arts school despite his age.

After becoming political during World War II, he eventually enjoyed a very successful career where he achieved international success until he died of heart failure in 1973.

Claude Monet was one of the founders of the impressionist movement, coining the term from his painting Impression, Sunrise.

His subject matter always centered on land and seascapes with his most fond subject being the French countryside.

Often, he would paint the same scene over many times to capture the changing of seasons. However, he also painted portraits, most notably of his wife Camille Doncieux in The Woman in the Green Dress.

Born in 1840 Paris, France, he started with drawing charcoal caricatures in his youth. He later learned painting and his outdoor painting style from his mentor Eugene Boudin.

While traveling as a child, he met Edouard Manet, another eventual impressionist. After returning from the military as an adult, he struggled for many years until he finally reached a successful career with the impressionist movement.

He eventually died of lung cancer in 1926 at eighty-six years old. Monet was one of the few impressionists that found commercial success while still alive.

Vincent van Gogh, born in 1853 Netherlands, is one of the most prominent painters in history. With a large body of work, he created everything from landscapes, still life’s, portraits, and self-portraits.

Born to a wealthy family, he spent his early life as a missionary until pursuing painting when he was almost thirty.

Throughout his life, he was plagued by mental health issues, going in and out of psychiatric hospitals, one instance occurring after he severed his own ear which he is now infamous for. Eventually his mental health issues caught up to him and he died of suicide in 1890.

Ironically, Van Gogh became famous after his suicide, becoming a mythological figure deemed as a tragic genius. His work is largely characterized as neo-impressionistic with a strong use of vivid colors.

Edvard Munch was born in 1863 Norway the son of a priest. After enrolling as an engineer in 1879, he learned scaling and how to draw until an illness disrupted his studies and he dropped out, later pursuing painting instead.

After a few years, he moved to Paris where he studied the impressionist style and learned how to use their vivid color techniques. Struggling to find his own unique style, he continually bounced between naturalism and impressionism throughout his adulthood.

Eventually, his paintings turned more symbolic than realistic, depicting the essence of emotions rather than individuals displaying emotions themselves. The last two decades of his life Munch spent isolated until he died in 1944.

Of all of his famous paintings it is his work called The Scream, one of the most valuable paintings of all time representing the anxiety of the modern man. This work has four versions: two in pastels and two in paints.

Salvador Dali, born in 1904 Spain, was a surrealist artist that bore striking and bizarre images, often containing sexual and Freudian as well as mathematical and scientific elements. In addition to painting, he also pursued film, poetry, sculpture, and graphic arts.

At fourteen years old, Dali attended the Municipal Drawing School at Figueres where he studied drawing and later moved to Madrid to further his studies.

Early on, his art was more in line with cubism and avant-garde styles but later shifted to surrealism where he became a prominent figure. After moving around Spain and France, he eventually moved to the United States where his career took off.

In 1980, Dali started to exhibit signs of Parkinsons, and, with the passing of his wife Gala shortly after, led to a halt in his artistic endeavors and a steady decline until his own death in 1989.

Andy Warhol, born in Pennsylvania in 1928, was a wildly controversial pop artist. His use of irony and popular elements in his art, fusing together the worlds of art, advertisement, and celebrities, was criticized as a business move to make more money rather than an artistic choice.

As a sickly child, Warhol spent a lot of time bedridden, to which he credited as a vital period in forming his skills and artistic expression.

Unlike a lot of other famous painters Warhol studied commercial art in high school, he then moved to New York City where he worked in magazine illustration and advertising and became known for his shoe designs.

His inflammatory drawings caused his art to quickly become both popular and controversial.

Even more controversial was his studio, which housed drag queens and other queer individuals, and his personal life where he lived openly gay in a pre-Stonewall era.

Eventually he died due to post-operational complications in 1987.

This collections of famous artists although not exhaustive covers the some of the most popular and easily recognizable names in the world of art.

Many of the artists on this list have a massive catalogue of artwork to their name and are responsible for some of the most iconic images ever produced.