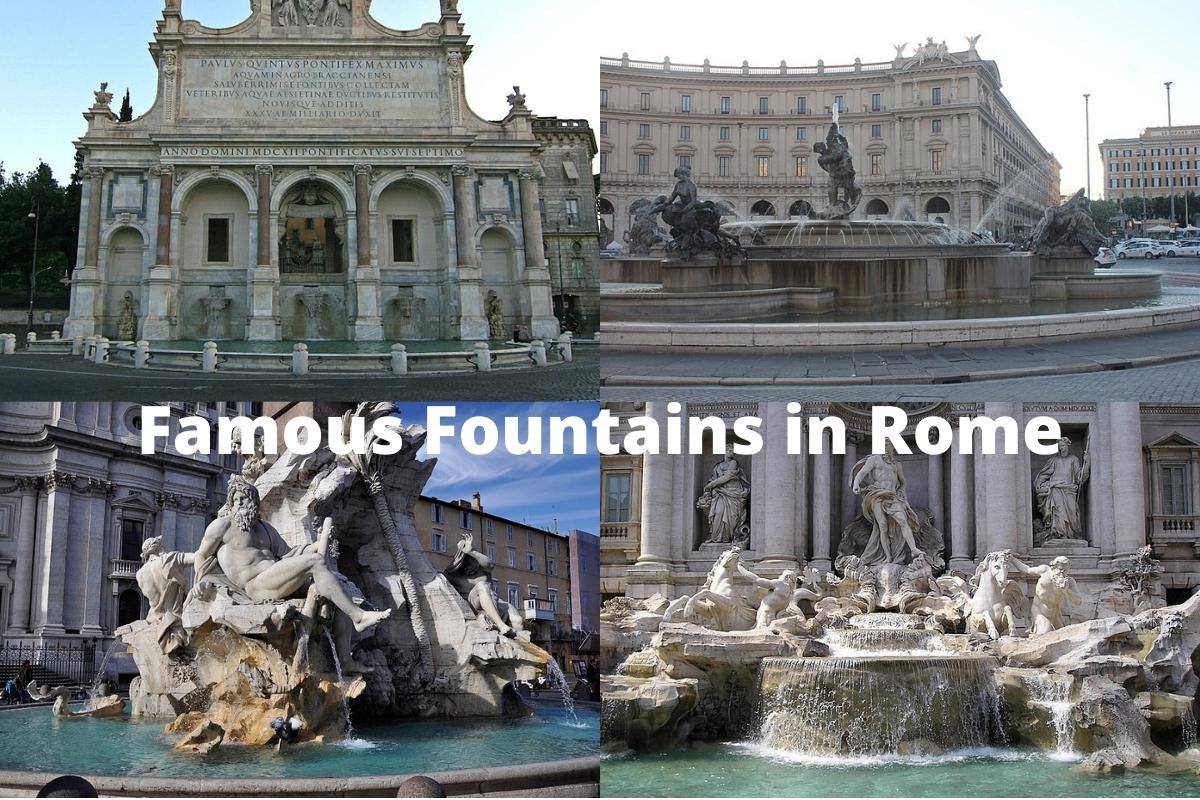 Rome, Italy is a city that’s teeming with some of the most illustrious artwork and architecture in the world. It is home to numerous museums that are each filled with artwork that often dates back to the Italian Renaissance, which is widely considered to have been the pinnacle of artistic expression in all of human history.

Aside from the two-dimensional artwork, there are countless masterpieces that are three-dimensional works in the city as well.

The city’s fountains are deeply-rooted in the history of Rome itself, as well as the more ancient foundations of the Roman Empire, which spanned the first five centuries A.D.

Water was as much a part of Roman history as any other and some of the most famous Roman aqueducts and fountains are still standing to this day across much of Italy and other parts of the world.

The Roman Empire was the first that successfully manipulated the flow of water and made it possible to construct baths, drinking fountains and other works thanks to the culture’s incredible engineering.

Fountains were a central part of Roman culture and the significance of fountains have been more or less characteristic of Italian culture as a whole over the last several centuries.

In this article, we will identify 10 of the most famous fountains in Rome and provide some of the history related to each structure.

One of the most well-known fountains in the city of Rome is the Trevi Fountain (Fontana di Trevi). This structure is situated in front of the Palazzo Poli, which is a palace that’s located just over 2 kilometers east of Vatican City and is fed by the Aqua Virgo, or Acqua Vergine.

The Acqua Vergine is one of the ancient Roman aqueducts that was originally constructed in the 1st century B.C. This aqueduct feeds pure spring water into the city of Rome and is still in use today.

Pope Clement XII orchestrated a contest in 1730 in which various artists submitted designs for the fountain and the winner would be selected to have a commission from the pope to see that the fountain was redesigned.

Alessandro Galilei was initially named the winner, but the people of Rome protested as Galilei was a native of Florence and there was serious demand that Nicola Salvini, originally from Rome, be awarded the commission.

The overall design of the fountain includes the figure of Triton, the Greek god of the sea, holding the reins of a chariot which is made of a giant sea shell that was given to him by Oceanus, a god that pertains to water and the Earth’s rivers.

The chariot is driven by hippocampus, which are Roman sea-horses believed to have been used by these gods.

The Fountain of the Four Rivers (Fontana dei Quattro Fiumi) is arguably one of the most famous structures in all of Rome as it incorporates many different elements of the city’s history. It’s built in the middle of the Piazza Navona, which is a major tourist site that’s surrounded by historic structures and architecture.

The fountain itself was commissioned in 1651 by Pope Innocent X who wanted the structure to be built in the piazza as it was home to his family’s palace, as well as the church of Sant’Agnese in Agone.

The fountain’s statues include the four major river gods from Roman mythology, as well as a massive Egyptian obelisk, which is decorated with hieroglyphics, as well as the Pamphili family crest, which is the image of a dove holding an olive branch in its beak.

These four river gods also represent the four major rivers that exist on the Earth’s four most populated continents. These include the Danube in Europe, the Nile in Africa, the Rio de la Plata in the Americas and the Ganges in Asia.

The design of the statue was created by Gian Lorenzo Bernini, who is one of the most celebrated sculptors and architects from Italian culture and was the most prominent artist to have worked in sculpture from the Baroque era.

Located in the northern end of the sprawling Piazza Navona, the The Fountain of Neptune (Fontana del Nettuno) is another one of Rome’s most celebrated fountains.

This structure is much smaller than some of the other fountains that were designed during the same time period at the end of the Italian Renaissance era.

The fountain’s design and construction was commissioned by Pope Gregory XIII in 1574. The work itself was designed by Giacomo Della Porta who created a relatively simple fountain that consisted of a large basin.

The lower portion of this basin consisted of white marble while the upper portion was made of stone that was taken from Pietrasanta, which is a small town that’s located on the northern coast of Tuscany.

The fountain was renovated in the 1870’s based on sculptures that were designed by Antonio della Bitta. The main sculpture in the fountain depicts Neptune, the Roman god of water, wrestling with a giant octopus.

The Fountain of the Naiads (Fontana delle Naiadi) is one of the more picturesque structures in the city of Rome. It’s situated inside the Piazza della Repubblica, which is located on Viminal Hill, one of Rome’s seven hills.

The fountain’s basic structure was designed by Alessandro Guerrieri in 1888, but another artist would add on to the structure in 1901.

Guerrieri’s design included the placement of four lion statues that were made of plaster. This original design included a sculpture of the Greek sea-god, Glaucus, in the center. The fountain was later renovated by Mario Rutelli, who added the fountain’s four bronze sculptures to replace the four lions.

These four new bronze statues were Greek naiads, or nymphs, who are equally spaced apart from one another around the fountain.

Another prominent fountain that was designed by master sculptor and architect, Gian Lorenzo Bernini, is the Triton Fountain (Fontana del Tritone).

This structure is located at the entrance of the Palazzo Barberini, which is home to the Galleria Nazionale d’Arte Antica, Italy’s national art gallery.

The unique fountain is carved of limestone and features the figure of Triton perched atop a sea shell that’s being supported by four mermaid tails. The muscular figure of Triton is posed so that he’s holding a conch shell to his lips where a small stream of water spouts out of.

The fountain’s original design included a stream that shot out of the conch shell and spouted much higher into the air than the current stream of water.

Rome’s Fountain of the Boat (Fontana della Barcaccia) offers one of the most distinct designs of any fountain in the entire city. It’s situated near the Spanish Steps, located in the city’s Piazza di Spagna.

The fountain is made with a Baroque-style design and was initially commissioned by Pope Urban VIII in 1623. This effort to commission the fountain was part of an overall aim by an earlier pope to construct one fountain in each of Rome’s major piazzas at the time.

This fountain was designed by Pietro Bernini, father of Gian Lorenzo Bernini—arguably the most famous Italian sculptor from the Baroque era.

Many scholars and historians believe the sculpture was completed by Pietro with the help of his young son, Gian Lorenzo since the elder Bernini died in 1629 shortly after the fountain was finished.

The fountain’s design was inspired by a legend that tells of a boat being carried by floodwaters from the River Tiber in 1598 which eventually landed in the middle of the piazza.

One of the more easily-recognizable works in the city of Rome is the aptly-named Fountain of the Frogs (Fontana delle Rane). This unique fountain features 12 frogs that are situated around the fountain in various poses.

The Fountain of the Frogs was designed by Gino Coppedè, who was a prominent architect during the early 1900’s who was known for his stylistic designs. In fact, the district where the fountain sits is named the Coppedè District after the famous artist.

Built in 1924, this fountain also features four male figures that are seen with fishing nets being dipped into the pond section of the structure.

Many historians believe this fountain was created as a tribute to Bernini’s work that’s situated in the Piazza Mattei and features a number of turtles in the fountain’s sculpture.

The Fountain of the Pantheon (Fontana del Pantheon) is another distinct structure that also features a large obelisk in the center of the work. Located in Rome’s Piazza della Rotonda, this fountain was commissioned by Pope Gregory XIII and designed by Giacomo Della Porta in 1575.

The fountain’s sculpture was done by Leonardo Sarmani, who was a prominent artist and sculptor during the time period.

The obelisk is a copy of the famous Macuteo obelisk, which was created by Ramses II during his reign in Egypt. Pope Clement XI had the fountain’s design slightly modified in 1711, commissioning Filippo Barigioni to complete the work.

The Turtle Fountain (Fontana delle Tartarughe) is one of the most well-known fountain works associated with Gian Lorenzo Bernini and is among the most distinct in the city of Rome.

This beautifully-designed fountain was originally created in the 1580’s by two famous architects named Giacomo della Porta and Taddeo Landini.

Della Porta’s initial design is one that is based on a copy of other Roman fountains that were believed to be designed during the early Roman Empire.

Bernini’s turtles were added later in 1658, but the fountain has also experienced other renovations since it was constructed.

The Fontana dell’Acqua Paola is a large monumental work that’s located on the Janiculum Hill, which is another of Rome’s seven hills. The fountain was an effort that was commissioned by Pope Paul V in 1612 to mark the end of the Acqua Paola aqueduct, which had recently been restored to bring water once again into the city.

It was originally intended to be a source of drinking water for the residents of the area, but has since become a tourist attraction that’s rich in history. The structure was carved out of white marble and designed by Giovanni Fontana, who was part of a family of prominent architects during the time period.

The fountain’s design praises the efforts of Pope Paul V and features various elements such as the Borghese family coat of arms, as well as an eagle, dragon and angels.