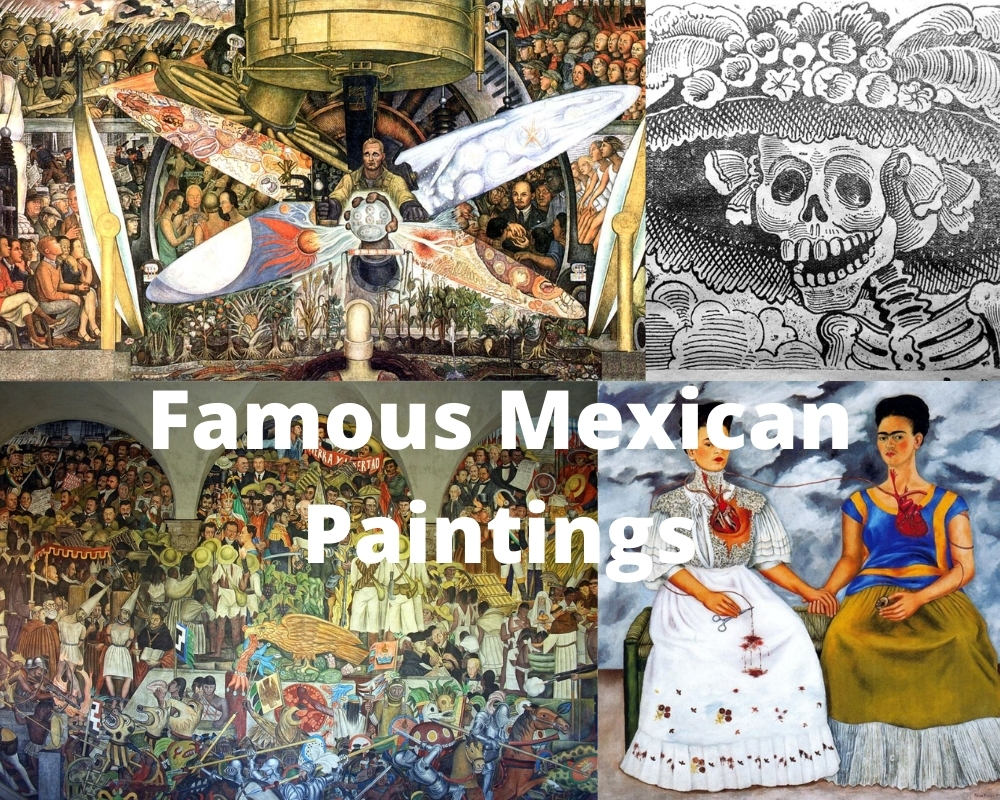 The country of Mexico is one of the most unique cultures in the Western hemisphere. The art and lifestyle of its people are largely influenced by indigenous themes that trace their roots back to the 15th century before the Spanish conquest transformed the nation.

The artwork of the 15th century and prior was focused on the different religious beliefs of the native tribes that inhabited the lands of Mexico.

Once Christianity swept through the region in the 16th century, Mexico’s artwork was forever changed and was mostly indicative of Christian ideals and values.

Despite centuries of rule that was tied to Catholicism, the people of Mexico have never quite forgotten the colorful flare and influences of the indigenous people that called the country home.

Once Spanish authority was expelled in the early 1900’s, Mexico and its people were free to once again explore the rare and vibrant styles of artwork that seem to define the region.

Taking a closer look at the 10 most famous Mexican paintings reveals a lively and warm culture that is truly unlike any other on Earth.

Mexican culture widely considers legendary artist Frida Kahlo to be the most famous of Mexican painters. Known for her gripping and sometimes bizarre self-portraits, Kahlo’s work titled The Two Frida’s is one that has long been considered a defining piece in Mexican art culture.

Kahlo was known for living as passionately in real life as her artwork often portrays and this painting is a vivid depiction of her feelings of duality, which were likely tied to her divorce with another famous Mexican painter, Diego Rivera.

The painting was completed in 1939 and shows one version of the artists dressed in a beautiful, flowing white dress that appears to be in the same fashion of European women’s attire at the time.

The Frida on the right, however, is adorned with a traditional Mexican-style dress that seems to be more fitting for the Mexican artist’s appearance.

The Frida on the left in the European dress is featured with a bleeding heart that is torn while the one on the right’s heart is shown unscathed.

This duality is thought to portray Kahlo’s strong sense of belonging to Mexican culture in the face of what was certainly an overwhelming sense to assimilate with the more popular European style of the day for most artists.

This work is meant to highlight Kahlo’s belief that she must stay true to her Mexican roots, which is why most art enthusiasts and critics consider it one of the most moving Mexican paintings in existence.

2. The History of Mexico – Diego Rivera

One of Mexico’s most famous paintings was done, not on canvas, but as a mural upon a large main staircase inside the National Palace of Mexico City. Rivera was well-known for work that featured scenes from a historical context and this painting, titled The History of Mexico was begun in 1929 and finally completed in 1935.

Beginning in what was considered the native Aztec period onward into what was the present day Mexico during the time Rivera painted the work, it consists of a litany of scenes that defined the country to its core.

It depicts the indigenous peoples being overtaken by Christian influence and the centuries that followed under Catholic faith.

Rivera focused heavily upon the nation’s struggle for independence from Spain and the mural is alive with many famous figures that shaped Mexico throughout the country’s history.

The painting is one that beautifully captures much of the country’s struggles and triumphs in one, sprawling work.

Frida Kahlo’s work titled The Broken Column is another one of her famous self-portraits that evokes a much greater meaning than superficial beauty.

Kahlo was involved in a serious bus accident in the summer of 1925 and would forever live with severe pain and nagging injuries that resulted from the devastating event.

She had to endure more than 30 different surgeries to repair some of the damage done in the accident and was left unable to bear children, which was said to weigh heavily on her mind from that point on.

The painting was completed in 1944, many years after the accident, but portrays a semi-nude Kahlo in a beautiful white dress. Her body is dotted with nails, likely symbolizing the persistent pain that she was left with for many years following the event.

Her spine is represented as a broken and crumbling column and the background of the painting is a barren landscape, which likely pointed to the devastating fact that she was unable to have children as a result of the crash.

One of the most iconic pieces of Mexican painting was done by the famed José Guadalupe Posada in 1913.

Featuring a simple, yet elegantly-dressed female skeleton posed in a smiling fashion and wearing a lavish hat, the work is a bizarre paradox that incorporates the traditional Mexican respect of the dead with a dash of the European dress that was so indicative of foreign influence in the nation.

Posada sought to highlight the tumultuous relationship that Mexico had with European influence in a satirical way that undoubtedly caught the attention of viewers and forced them to consider its meaning.

The painting has since become a iconic figure of the Mexican Day of the Dead and is displayed in many different forms.

Mexican artwork has long been known for its surrealist influences, including the work of Leonora Carrington.

Her painting titled Self-Portrait (Inn of the Dawn Horse) was done in 1938 and features a strange scene that involves a gaunt Carrington sitting in a chair facing a female hyena. Behind her is a rocking horse hung on a wall while the window in the background portrays a beautiful, galloping white stallion.

This painting’s meaning has long been argued by art enthusiasts and critics alike.

Few have been able to definitively say what Carrington hoped to accomplish with this work, but that level of mystery undoubtedly plays into the reasons why this painting is one of Mexico’s most famous.

6. Man at the Crossroads – Diego Rivera

One of Rivera’s most famous works was wracked in controversy and spanned two nations that were often at odds with one another. The work was originally painted at the request of the wealthy Rockefeller family in New York City’s Rockefeller Center.

When the artist was faced with demands to remove a portrait of Vladimir Lenin, he refused to do so, which prompted the Rockefellers to order the removal of the work.

Rivera captured the details of his painting in a photograph and would later recreate it at the Palacio de Bellas Artes in Mexico City in 1934. This defiant measure solidified the work as one of the country’s most famous paintings and stands to this day as a symbol of Mexican individualism in the face of American influence.

One of the most famous Mexican painters in the modern era is Rufino Tamayo. His painting, Tres Personajes depicts a vibrant and colorful scene of abstract expressionism that many consider to be one of the country’s greatest works.

The 1970 painting portrays three figures that are highlighted by a dusky reddish hue, which is outlined by darker colors.

The contrasting colors and sharp imagery work together to create a scene that is authentically Mexican in nature and widely viewed as a testament to the country’s culture.

Surrealism has held a strong influence over much of Mexican artwork over the years and one such work by David Alfaro Siqueiros is among the greatest in the famous style.

The painting is titled Echo of a Scream and features a disturbing scene in which a large crying child is shown amongst destruction and desolation in the background.

The painting was done in 1937 and was likely meant to serve as a portrayal of the horrors of war following the lasting imprint left by the Spanish Civil War.

The work is among the most gripping of Mexican artwork that is focused on the harsh nature of war.

The power of Christian artwork can be seen all over the country of Mexico and many of its most famous works have stood for nearly 500 years. The painting known as Our Lady of Guadalupe has supernatural origins dating back to 1531, according to Mexican history.

It is said that the work originated from an Aztec convert to Christianity known as Juan Diego, who came face to face with the Virgin Mary who asked that a shrine be built on the location where she appeared.

Diego reported this news to the archbishop who asked for proof. Once again, Diego is said to have returned to the Virgin Mary who instructed him to climb atop a nearby hill and gather flowers.

At the peak, Diego found Castillan roses which were not native to the area and should not have been in bloom during that time of year. Diego claimed the Virgin Mary arranged the roses inside his folded cloak and told him to return once again to the archbishop.

When he unfolded his cloak, the roses fell to the ground and revealed the image of the painting now known as Our Lady of Guadalupe.

The painting known as Man, Controller of the Universe was the result of Diego Rivera’s conflict that involved the Rockefeller family in the United States. Rivera was commissioned to paint a large mural inside Rockefeller Center in New York City.

After being told that his work was unacceptable due to the fact that a portion of it depicted Vladimir Lenin, his work was destroyed.

Rivera then left New York City and returned to Mexico where he painted a nearly identical image of the mural with the title Man, Controller of the Universe in 1934 at the Palacio de Bellas Artes in Mexico City.

The work is one that shows the stark contrasts in capitalism and socialism with much of the paintings’ capitalist subjects depicted as lavishly smoking and enjoying themselves while others suffer.

The contrasting socialist side of the painting shows Lenin joined in hands with a group of workers, highlighting a sense of equality.

We hope you have enjoyed our list of Famous Mexican Paintings!