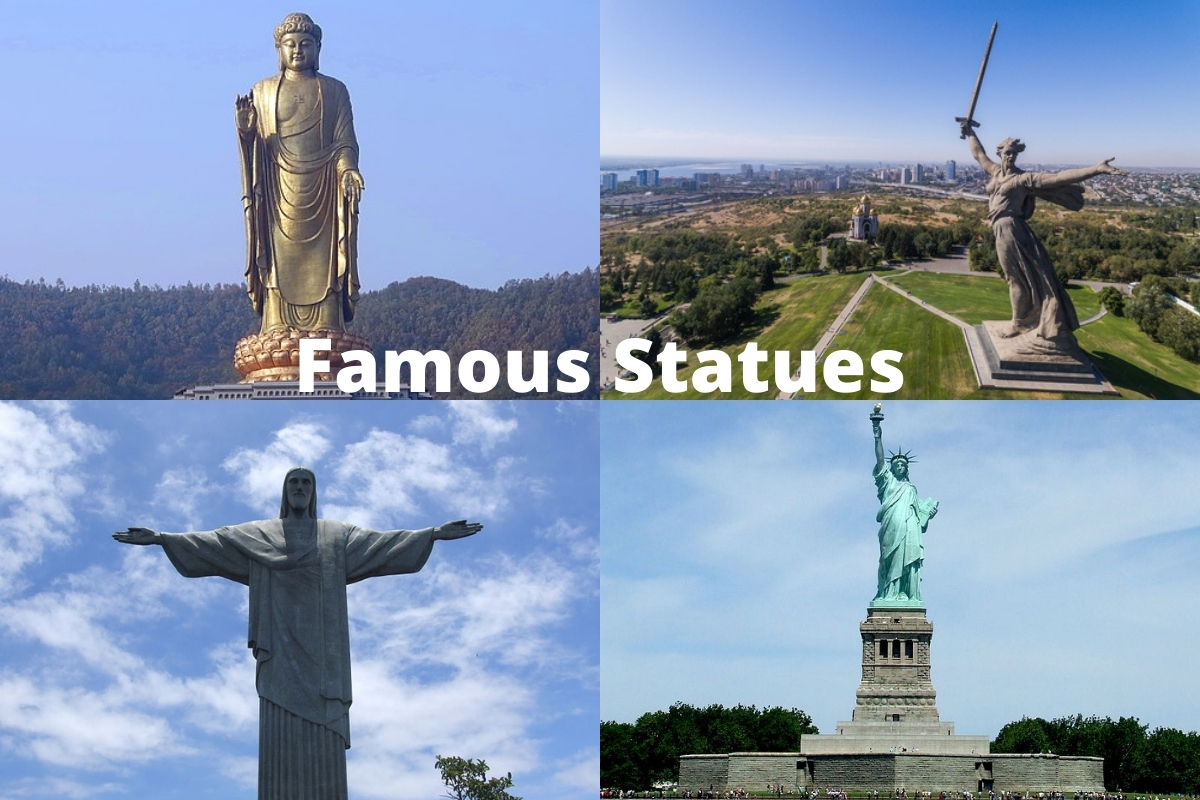 Statues have long been a means that different cultures use to commemorate certain religious, societal, and political figures. Various statues are scattered around the world, from the mysterious Easter Island head statues to the numerous statues of Imperial and Soviet leaders in St. Petersburg, Russia.

Statues have been made out of nearly any type of stone or other material and some of the world’s oldest statues are still standing today.

Creating a statue requires intense amounts of focus and planning. Each bit of material that’s removed from a stone statue is something that can’t be undone or fixed.

One wrong blow from the hammer and chisel might result in too much stone being removed. Throughout history, some artists have excelled in producing statues that are world renown.

Here are our selections for the 10 most famous statues ever created.

One of the most famous statues in the world stands as a symbol of liberty and freedom at what was once the most popular port city along the United States coast.

New York’s Statue of Liberty was first dedicated in 1886 and placed on what is now known as Liberty Island just off the coast of New York City.

The statue’s actual name is Liberty Enlightening the World, but has since been referred to mostly as the ‘Statue of Liberty.’

It stands a total of 151 feet and 1 inches tall and overlooks the Atlantic Ocean in an area where many thousands of immigrants entered the country from Europe and other parts of the world during the late 19th and early 20th century.

The statue was designed by French sculptor Frédéric Auguste Bartholdi and the actual building was directed by Gustave Eiffel, who is best known for building the Eiffel Tower in France. Lady Liberty is seen standing on a pedestal holding a torch in one hand and a tablet in the other.

Another highly-celebrated statue that has become a symbol of the country it’s located in is known as Christ the Redeemer. It stands on a rocky outcropping overlooking the bustling city of Rio de Janeiro, Brazil.

It is one of the most visited tourist attractions in the city as it is both a landmark for the capital city, as well as a popular symbol of the country’s Catholic faith.

The massive statue of Jesus Christ stands at 28 meters tall, but is a full 30 meters including the pedestal it is placed upon. The statue’s position makes it look much larger due to its higher elevation.

The statue was designed by Heitor da Silva Costa and Carlos Oswald, who were both natives of Rio de Janeiro and it was French sculptor Paul Landowski who actually created the work.

The statue is one of the more iconic works in history as the outstretched arms of Christ are easily recognizable to anyone familiar with it or the city of Rio de Janeiro.

The city recently installed colorful lights at the base which are used to illuminate the statue at night with a variety of colors, often the green and yellow hues that are used in the flag of Brazil.

Another one of the most iconic statues in the world, and one that has been copied many times since it was discovered, is called Venus de Milo.

This Greek sculpture was nearly lost to history until a peasant farmer discovered it along the island of Milos in 1820. It is believed to have been created sometime between 150 and 100 B.C.

The statue is believed to be a depiction of Aphrodite, but there are numerous Greek goddesses that it might represent. Shortly after its discovery, it was taken to France under the orders of King Louis XVIII who decided to display the work in Paris’ Louvre Museum.

The statue is known for its distinct flaws as much as its initial design. The arms of the female figure were broken off long ago and scientists have learned that she was also once adorned with a crown, as well as jewelry around her neck and arms.

Russia is famous for some of the most incredible statues in the world. One such work is known as The Motherland Calls, which sits on the top of a hill called Mamayev Kurgan outside of Volograd, Russia.

It was first erected in 1967 as a symbol of Soviet pride and was declared to be the tallest statue in the world at the time.

It’s confirmed to be the tallest statue in Europe as it stands a full 85 meters in height. It was designed by famous Russian sculptor Yevgeny Vuchetich and Nikolai Nikitin, a prominent engineer from the time period.

The Motherland Calls has a very unique design as the woman stands brandishing a long sword, beckoning her comrades to follow.

The hollow structure was originally designed with pressed concrete and it has since experienced some issues due to the weight dispersion from the sword and outstretched hand. The sword was replaced in 1972 by a lighter version that’s made of stainless steel.

One of the largest and tallest statues in the world is China’s Spring Temple Buddha. The structure is located in the small town of Zhaocun, which is located in a scenic area of Lushan County, Henan.

It stands as a symbol of the region’s most dominant religion, Buddhism, and has since become a national treasure for the people of China and those of the Buddist faith.

Construction began on the statue in 1997 and it was completed in 2008. The statue stands at a whopping 502 feet tall and is the second-tallest statue in the world behind India’s Statue of Unity.

It’s made of a copper cast material that appears more like gold in the sunlight.

6. The Great Sphinx Of Giza

One of the greatest statues in the entire world is also one of its greatest mysteries. The Great Sphinx of Giza sits near the base of the ancient city’s legendary pyramids and has baffled scientists and historians for ages.

Much of the structure was buried for hundreds of years until the early 1800s when archaeologists discovered the lion-like body after digging around what they perceived to be the base of the statue.

The overall purpose of the Sphinx is largely unknown and its actual age also remains a mystery. With the head of a human and the body of a lion, it’s one of the most intriguing works from ancient Egypt to have survived.

Geologists have recently pointed out that the weathering around the base of the Sphinx indicates that it was subjected to thousands of years of rainfall. This makes its origin a true enigma as the region around Giza has been a desert for virtually all of recorded history.

The Leshan Giant Buddha is one of the largest and oldest ancient statues in the world. It is located in Sichuan, China along the edge of the waters where the Min and Dadu rivers meet.

The initial purpose of the Leshan Giant Buddha was an offering for peace which was meant to quell the often turbulent waters of both rivers, which claimed numerous ships and lives during this time period.

It stands at 233 feet tall and is carved into a sandstone cliff that overlooks the waters.

The giant statues that are scattered around Easter Island are some of the most intriguing works from the ancient world. Many archaeologists and scientists have been confused as to how the Rapa Nui people who once inhabited the eastern Polynesian island were able to create them.

A great deal of mystery also surrounds how they could have moved the incredibly heavy stone carvings.

The statues were created sometime between 1200 and 1500 A.D. and their exact purpose is unknown. These structures are referred to as Moai, which translates to ‘statue’ in the Rapa Nui people’s native language.

Many of the statues were restored during the 1990’s by archaeologists and some still lie in the ground as modern machinery is often unable to move them.

The Tian Tan Buddha is a massive structure that dominates the landscape in Ngong Ping, Lantau Island, in Hong Kong. The large statue is situated near the Po Lin Monastery and is a symbol of the Buddhist faith that is often referred to as the Big Buddha.

It was completed in 1993 and is a combination of more than 200 individual bronze pieces that fit together to form the statue.

The Tian Tan Buddha stands at 112 feet tall and sits on top of a hill with multiple floors and rooms underneath the structure.

The chambers beneath the giant statue house a large bell, as well as what is believed to be the remains of Gautama Buddha, who is the most highly-revered figure in the Buddhist faith.

Michelangelo di Lodovico Buonarroti Simoni, commonly known as Michelangelo, was one of the most celebrated figures from the Italian Renaissance era. He was a prolific painter, but is regarded even more for his talents as a sculptor during the 15th and 16th century.

Many of his works are featured in cathedrals and museums around his home of Florence, Italy, but one sculpture in particular is among the most famous statues in the world.

The statue is simply called David and stands as a larger-than-life figure that is 17 feet tall. Michelangelo created the massive marble sculpture in his youth before he even reached the age of thirty.

The nude image of David stands with a muscular physique that was a symbol of health and purity for those in the Catholic faith during the time period when the statue was created. However, there is a deeper meaning that many critics and scholars believe the statue represents.

The statue of David is said to also be a symbol of liberty for the Republic of Florence, which was threatened by the powerful Medici family of Rome during this era. The statue stood in front of the Palazzo Vecchio, which was essentially the center of government in Florence in 1504.

He was situated with his eyes fixed in the direction of Rome in what many believe to have been a warning to the Medici family not to attempt to assert dominance in the city of Florence.