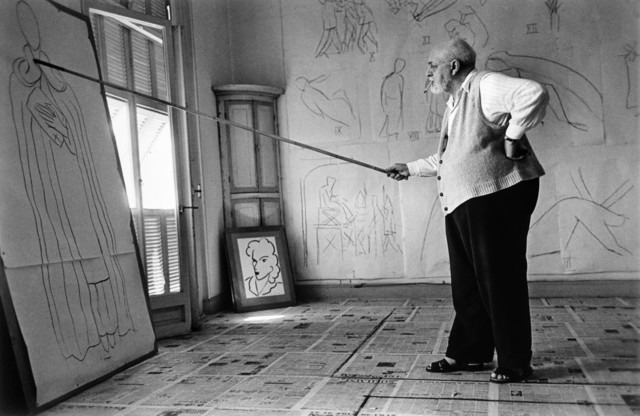 Henri Matisse was a French artist that was responsible for some of the most revolutionary shifts in the art world during the early twentieth century.

He leaves behind a very large volume of work in printmaking, sculpture but is best known for his painting.

When was Matisse born?

Henri Matisse was born on 31st December 1869 to parents Emile Hippolyte Henri Matisse and Anna Heloise Gerard he was the eldest of two brothers one of which died before his second birthday.

Where was Matisse born?

Henri Matisse was born in Le Cateau-Cambresis, which is a commune in the Nord Department in the north of France.

The town has the third largest collection of Matisse works which reside in the Musee Departmental Henri Matisse, which was established by the artist himself in November 1952

When did Matisse Die?

Matisse died on 3rd November 1954 in Nice, France from a heart attack, he was 84 years old.

Matisse moved to Paris to study law in 1887, earning a degree and going to work as a law clerk and court administrator.

In the winter of 1889 when recovering from appendicitis, Matisse began painting as a way to pass the time. It quickly grew into a passion, and he began studying academic painting with William Bouguereau and then later Gustave Moreua.

Showing great promise with his classical training, in 1896 became a member of the official Salon in Paris, and it seemed likely that he would go on to have a successful career as a talented but conservative painter. Then, along with a similar group of artists, he discovered Cezanne, Van Gogh, and other neo-impressionists.

With his friend Andre Derain and Maurice de Vlaminck he was a founder of the fauvist art movement, which was recognized by simplified lines, deep bright colors and expressive spontaneity that gave the paintings real vibrant emotion.

Indeed, Matisse is known for his intuitive and expert use of color.

While both the fauvists and the impressionists where interested in capturing the essence and feeling of a place through color, Matisse was less interested in representation as he was in stripping things down to the basics or showing them in a new way. “We must see all life as if we were children.”

Matisse also looked to other cultures for inspiration well– he was influenced greatly by Japanese and primitive art. He broke his paintings down in line, color, and composition, creating a unique style that made use of flat color, brilliant hues, and graceful fluid lines. He emphasized expression over detail and spontaneity over formality.

Hi first exhibition was in 1901, and by 1904 he was considered the leader of the fauvist movement. By this time he was painting full time, and traveled around France with his fellow fauvist Andre Derain.

His travels, including a 1910 trip to Morocco and Northern Africa, would have a great impact on the subjects he painted. The movement began to decline after 1906, but Matisse’s fame continued to spread.

One of the most influential early modernists, he is often paired with Picasso. They were both friends and rivals.

Both artists are responsible for the production of some of the most famous paintings ever produced.

Matisse and Picasso had very different personalities. Whereas Picasso was incredibly prolific, forceful, arrogant and somewhat intimidating person, Matisse was slow and thoughtful, encouraging other painters around him.

“The artist has but one idea. He is born with it and spends a lifetime developing it and making it breathe. I basically work without theory. I am aware only of the forces I use, and I move along the course of the picture’s creation, pushed by an idea that I come to know only gradually as it develops”.

Matisse lived on the french Riviera until his death in 1954. After a bout with cancer in 1941 he was confined to a wheelchair, but found a way to continue his work by creating large cut paper collages, gouaches découpés.

The geometry, bright color and graceful lines from his paintings carried over into his powerful collages.

It is interesting to note that while both Picasso and Matisse worked up to their death, their work diverged in opposite ways– Picasso’s becoming more self involved and psychological and Matisse becoming closer to abstract form and selfless experimentation.