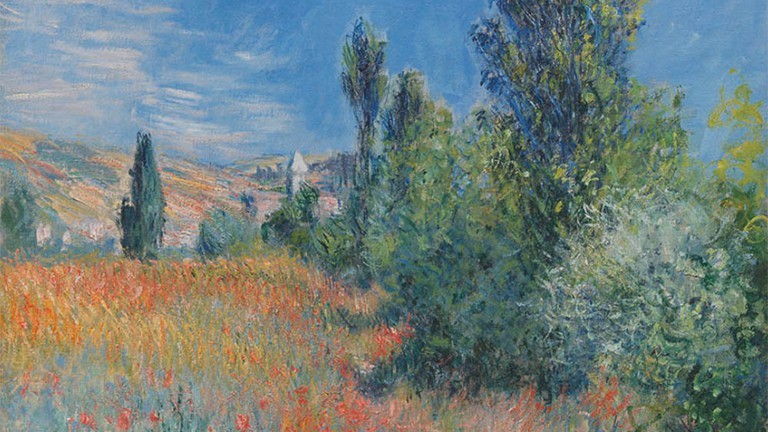 Claude Monet was born in 1840 in Paris France, some of the most famous Monet Paintings are centered around the use of light in the open country side or en plein air.

Monet’s Paintings would go on to exemplify the impressionist movement of which he is considered a founding member.

Below is a list of famous Monet paintings although not exhaustive it covers the artist most important works many of whom are series of paintings rather than individual.

It could be argued that Impression Sunrise of all of the artists work is the most famous Monet painting.

Despite his much loved series of work such as Water Lilies it is Impression Sunrise that launched no only Monet but the entire impressionist movement to fame.

Initially the impressionist and their art was not well received by the Paris art establishment.

With one famous critic of the time Louis Leroy suggesting that wallpaper was in more of a finished state than Monet’s paintings.

They were so resolutely rejected that it drove the group of artists to hold their own exhibition after being rejected from the Paris Salon in 1874.

Impression Sunrise is the painting that inspired the name of the new movement we have also featured it in our list of the 100 most famous paintings along with other impressionist works.

Ironically it is actually not an great example of impressionism as it has a much more restrained use of brush strokes and more muted colors than the art that one go on to personify the movement.

Next to Impression Sunrise the series of paintings that Monet is mostly famous for would be the Water Lilies.

The Water Lilies series spans some 250 pieces of art of varying sizes.

For the last 30 or so years of his life Monet spent considerable time painting en plein air in his garden in Giverny.

In his garden there was a large pond filled with water lilies and a small bridge across it.

Monet would spend considerable time and energy on painting the pond with considerable focus on the water lilies.

Some of the larger works of the series would become one of the famous impressionist paintings ever.

In the 1920’s the French government built a matching pair of oval rooms in the Musee de l’Orangerie in Paris that has become a permanent installation of eight of Monet’s murals of Water Lilies, the artist sadly died but a few short months after it’s opening.

Monet painted several series of paintings that focused on the same subject matter but it is Water Lilies that he we be most remembered for.

3. The Thames Below Westminster

Along with other famous impressionist artists Daubigny and Pissarro Monet and his family moved to London to flee the Franco-Prussian War from 1870 to 1871.

During this time he would have a fairly unproductive spell in his career as he only painted a few paintings which centered around the Thames and Green park and Hyde Park.

It is the Thames Below Westminster that is considered his best work from the city.

The painting depicts London on a foggy day, with which the artist would later say that only in fog is London a beautiful city and this is why only in winter does he truly appreciate it.

Westminster dominate the right hand side of the image with Westminster bridge creates a horizontal vocal point between the sky and the river.

Other great Monet works in the series feature pictures of the Houses of Parliament painted in a similar style with some of the canvas only started in London and were later finished in his house in Giverny after returning to France.

Another one of Monet’s series of en plein air paintings the Haystacks(Les Meules à Giverny, original titles) were painted close to his house in Giverny.

The series consists of 25 paintings which the artist began towards the end of the summer in 1890.

A similar scene is painted in each piece however Monet varied the times and day and the weather conditions as a way to capture how natural light changed significantly the subject throughout the days and weeks.

Although many of the canvases were started outside, Monet soon realized that he could not capture each painting as he wanted given that the light changed so quickly.

He started on two canvases one day and had to request his helper to bring more such was the change in light.

As the weeks progressed he would have many of the unfinished canvas returned to the location so that he could choose which work matched the given light conditions on the day allowing him to finish or progress it to nearer completion.

Some of the works were finished at his home in his studio where he had better control of the light.

Just like the series of haystacks above Monet would paint the cathedral of Rouen in Normandy at differing times of the year and the day.

The artist created a temporary studio across the street from the cathedral in rented rooms.

Many of which were reworked in his studio at home at a later date.

Just over thirty pieces were completed and all focus on the facade of the cathedral which was famous for it’s Gothic style of architecture.

They were a departure from his more landscapes focused works to more permanent urban structures and their relationship with light, color and shadow.

6. Woman with a Parasol

One of Monet’s lighter canvases Woman with a Parasol – Madame Monet and Her Son depicts both his wife an son Camille and Jean on a windy summer’s day some where near their house when they lived in Argenteuil.

During their stay in Argenteuil Monet had one of his most productive periods which signified a move away from purely landscape pictures to more involved works that contained multiple figures.

Both his wife son appear to have been captured in a very brief moment despite the fact that the initial work probably took all day to complete.

It is Monet animated brushstrokes and vibrant colors that really help to bring life to the painting.

The artists assumed a very low viewpoint in the image and the sense of perspective allows the viewer to see the image as if they where looking up whilst sitting on the ground in front of his wife.

Monet and his wife only made one visit to Venice and had no real intention of working whilst on the trip.

However, the views from his hotel of the San Giorgio Maggiore and the splendid sunsets that he deemed unique in the world with the monastery as a silhouette in front of it.

The are six paintings in the series all of which are painted in varying lighting conditions.

The majority of which were painted from his hotel room as the artists disliked working in crowds.

This piece however from it’s perspective would appear to have been painted from the waterfront.

Monet finished very few of the works whilst in Venice and instead choose to finish them at his home in Giverny much was the artists usual practice at the time.

One of the reasons for this was that the time to finish a painting to completion would span many different lighting conditions as the sun moved throughout the sky and Monet was only interested in capturing a certain light.

8. The Artist’s Garden at Giverny

Towards the end of his later life Monet spent considerable time in his garden famously painting his Lilies series, yet there are still other notable works by the artist of other parts of the garden.

The Artist’s Garden at Giverny was the result of years of cultivation and great care and attention was given to what flowers and plants were painted where and how each others colors would relate to each other.

The flowers in question are Iris’s in varying colors of pink and purple planted below trees which offer varying amounts of shade and light to fall through onto the flowers.

Van Gogh is also famous for his work with the Iris flower but the two works are very different in their composition.

After returning from London in 1873 Monet and his family settled in Argenteuil were he would return to painting landscapes of which The Poppy Field is one of his most famous.

Whereas in later life Monet would favor his garden in Giverny his time spent in Argenteuil would allow him to embrace en plein air painting in and around the country side.

The Poppy Field was painted roughly around the same time as Impression Sunrise before the first impressionist exhibition.

In the scene Claude Monet takes a rather ordinary landscape with what is believed to be his wife and son and transforms it to a master class in the restrained use of color.

Whilst the greens, browns and blues are subdued it is the use of red that dominates the entire lower left hand side of the painting.

10. The Woman in the Green Dress

Although Claude Monet is best known for his impressionist works before he was famous and the movement had gained a foot hold he was still a very skillful realist painter.

Monet was actually working on a very large canvas(Luncheon on the Grass) but the piece would not have been finished in time for it to be included in the 1866 Paris Salon.

Upon the request of his close friend Gustave Courbet he was urged to paint something quickly and in a single go so that he could submit something to the Salon.

Monet painted Camille who would later become his first wife.

At the time full length portraits were usually reserved for royalty or nobility and such a portrait was seen as somewhat unconventional.

The painting was actually very well received at the time and sold for the amount of 800 francs which at the time would have been a princely sum of money for the struggling artist and his lover.

As an impressionist artist Monet name stands among the greats he is attributed as a founding member and driving force of the movement.

We hope you have enjoyed this list of famous Monet paintings.