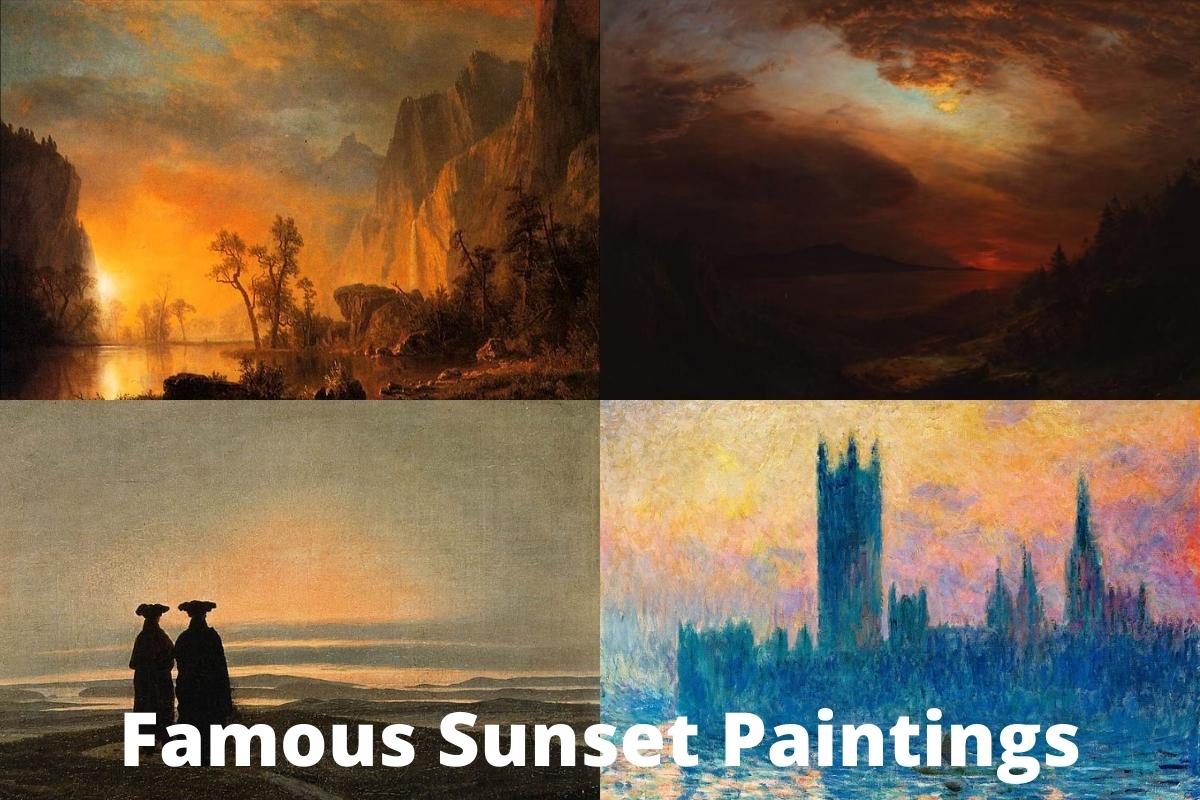 Nature has long been the source for many artists’ inspiration when it comes to producing works that are brimming with color and brightness. For centuries, some of the most celebrated artists in the world have produced works that focused solely on the beauty of sunsets.

Throughout every part of the world, the sunset seems to present itself as a new display with certain elements that make each one completely unique.

Capturing such majestic natural wonders as sunsets have proven to be quite challenging for many painters while others seem to have the uncanny ability to accurately portray the universe’s incredible colors and contrasts with great precision.

Art critics and historians typically agree that having the ability to paint a sunset in a way that depicts the breathtaking nature of the event is the mark of a master artist.

Throughout history, many of the world’s most well-known painters have, at one point or another, attempted to create works centered around sunsets. Here are 10 of the most famous sunset paintings ever done.

Claude Monet is revered by many art historians and critics alike as the father of the Impressionist movement that took place in the early 20th century.

He had the ability to display colors in remarkable detail and often painted works that featured various ways in which the sun’s light played across the scenes and settings that were the focus of his paintings.

One of his works is arguably the most popular painting in history that directly focuses on a sunset.

The work is titled San Giorgio Maggiore at Dusk and was completed in 1912 toward the latter end of Monet’s career when he had already become one of the most influential figures in the world of art at the time.

The painting presents the viewer with a captivating sunset that is represented with the warm, charming glow that was characteristic of Monet’s Impressionist style.

The elegant San Giorgio Maggiore is a historic landmark in Venice, Italy and is one of the few island monasteries that has been the focus of numerous paintings by Monet, as well as others during its history.

Monet’s work is famous for its depiction of the gentle waters surrounding the monastery and how they reflect the many different color contrasts of the fading sunset.

Caspar David Friedrich is widely considered to be one of the most famous German painters from the 18th and 19th centuries. He is remembered for his ability to create landscapes paintings that many art historians and critics agree are among the most masterful works in the genre.

He is credited with such paintings as Wanderer Above the Sea Fog and many other works that depict nature’s fascinating displays from around the world.

One of his works known as Sunset (Brothers) or Evening Landscape with Two Men is considered to be among the most highly-praised sunset paintings ever created. This work, like most of Friedrich’s others, was done according to the Romanticism style that the painter is known to be associated with.

Completed sometime between 1830 and 1835, this painting shows two men who are thought to be dressed in attire that was commonplace during the early 1800’s in Germany viewing a sunset.

The dense clouds mask the sun’s image and produce a high-reaching glow that illuminates the land in the painting’s background, which appears to be a coastal area with many inlets and small knolls along the shoreline.

3. The Fighting Temeraire, Tugged to Her Last Berth to be Broken Up – J. M. W. Turner

J. M. W. Turner is one of the most well-known English painters and is credited with producing works that many consider to be among the most culturally significant paintings from the United Kingdom.

He is best known for his sprawling landscape paintings, as well as his maritime masterpieces that depict life at sea and the many different environments that sailors and ships find themselves in on the ocean.

One of his most famous works that centers around a sea-faring theme is much less action-packed and more solemn than anything else. The painting is titled The Fighting Temeraire, Tugged to Her Last Berth to be Broken Up and includes a subtle, yet meaningful depiction of a ship’s last voyage at sunset.

Painted in 1839, this work focuses on the story of the Temeraire, which was one of the most prestigious warships from the era when the British navy dominated the seas.

The ship is being tugged out away from shore by a small, paddle-wheel steam tug that seems to represent the changing of the guard for the nation’s naval forces.

The Temeraire, in all its elegant beauty, is being towed out to be scrapped in a way that Turner and many others believed to be a shameful end for such a decorated warship.

The sunset is representative of the ending of an era for the British navy and it’s once-great wartime vessels.

The Realism movement is one of the most notable of any art styles that shaped the course of history and told the true story of life as it was for many during the mid-19th century. Jean-François Millet was at the forefront of this movement and he painted various works that portrayed the hardships of life as a commoner in France during the time.

His work titled The Angelus is representative of the harsh conditions and lifestyle that many lower-class citizens had to endure throughout the 19th century.

The sunset casts a subtle light on a man and woman standing in a field. They are clearly praying and it is theorized by art critics that Millet’s intent was to depict the desperation of such a life.

The couple has now finished their work in the field and prays for their crops to flourish as it is their livelihoods at stake if the crops fail to produce.

Russian painter Ivan Aivazovsky is widely considered to be among the most talented artists to ever focus on maritime scenes and settings. He painted various works that depicted life at sea and the many different ways that sailors interacted with the ocean.

One of his most famous paintings was done in 1850 when sailing ships were still very much the most important means of travel and trade throughout the world.

Aivazovsky’s work titled The Ninth Wave is one that showcases the sea’s incredibly violent disposition and how it can smash a well-built ship to pieces seemingly at will. This painting portrays a few sailors desperately clinging to a bit of wreckage from a ship.

The sun’s light plays beautifully across the high-peaking waves and the sailors bask in the last hours of visibility, bracing for a long night of being pummeled by the incessant waves.

Despite his many issues with mental illness, Vincent van Gogh is remembered as one of the most gifted painters in history. He viewed life through a different lens and had the incredible ability to highlight the Earth’s natural charm in a way that few other painters were capable of doing.

He was a prominent figure in the post-Impressionist era and many of the works toward the latter end of his career were quite unlike any other artist’s efforts at the time.

His painting titled The Red Vineyard was done in the fall of 1888 and depicts a scene of vibrant, colorful beauty under a setting sun.

It is one of the more famous paintings done by van Gogh as it is believed to be the only work that was sold by the artist himself during his lifetime.

Camille Pissarro was one of the most influential figures of the early Impressionism movement. He experimented with a variety of different painting methods and spent a considerable amount of time painting scenes from the outdoors in a way that depicted the sun’s ability to shift colors and create deeper contrasts in some natural hues.

Pissarro’s 1890 painting known as Sunset at Eragny is easily among the most famous works that focus on a sunset. The artist managed to capture the immense brightness of the sun and how it creates scenes of beauty that are only visible for a few fleeting minutes.

His aim was to paint a scene of the sunset that could only be seen for a few moments before darkness fell over the landscape.

8. Sunset in the Rockies – Albert Bierstadt

When it comes to sunset artwork, many art lovers and critics alike agree that the name of Albert Bierstadt is virtually synonymous with breathtaking sunset paintings.

He is well-known for having the unique ability to portray various landscapes in a way that brings the viewer’s attention to the beaming sunlight just before it slips below the horizon.

One of his most iconic works is titled Sunset in the Rockies and features a scene that many people viewed with wonder at the time since the American West was largely an expanse of wonder and mystery for many.

He finished the work in 1866 and it garnered high praise as it was exhibited in the eastern United States to people who had never ventured west.

The painting showcased the raw majesty of the Rocky Mountain region. Bierstadt crafted the work in such a way that the sun’s golden glow is cast throughout a river valley with the snow-capped peaks of the Rockies barely visible in the faint background.

One of the more challenging aspects of painting a sunset is capturing the fading light and accurately depicting its stark contrast between the sun’s rays and the enveloping darkness.

Frederic Edwin Church managed to do just that in a way that perhaps no other artist has ever been able to in one particular work. Church was a member of the famous Hudson River School of painters who devoted themselves to portraying nature in all it’s illustrious beauty.

The painting is titled Twilight Mount Desert Island, Maine and was done in 1865. This work depicts the distinctive shoreline of Maine with its high-reaching coniferous trees and rocky outcroppings along with the deep red glow of the fading sun.

The painting seems to have an element of grim finality with its rather dark tones surrounding the outer edges. This is likely the intent of Church as he created the work at a time when the American Civil War was finally winding down to a close.

As we’ve noted already, Claude Monet was a central figure of the Impressionist era that managed to portray the beauty and contrast of nature in ways that others seemed to overlook.

For a time during the early 20th century, Monet focused on painting scenes of famous landmarks in London, England. Many of these works featured London’s Houses of Parliament which were situated along the Thames River.

His painting titled The Houses of Parliament, Sunset was created in 1904 and captures the thick fog that London was well-known for as it blanketed the towering buildings along the riverbanks. The sun is barely visible and it casts a somewhat dim light on the structure.

Monet created several works that were very similar to this with the same perspective, but different lighting conditions and some with heavier or lighter fog.

His House of Parliament series is considered to be a masterful depiction of the many different ways the sun can illuminate the famous landmark.