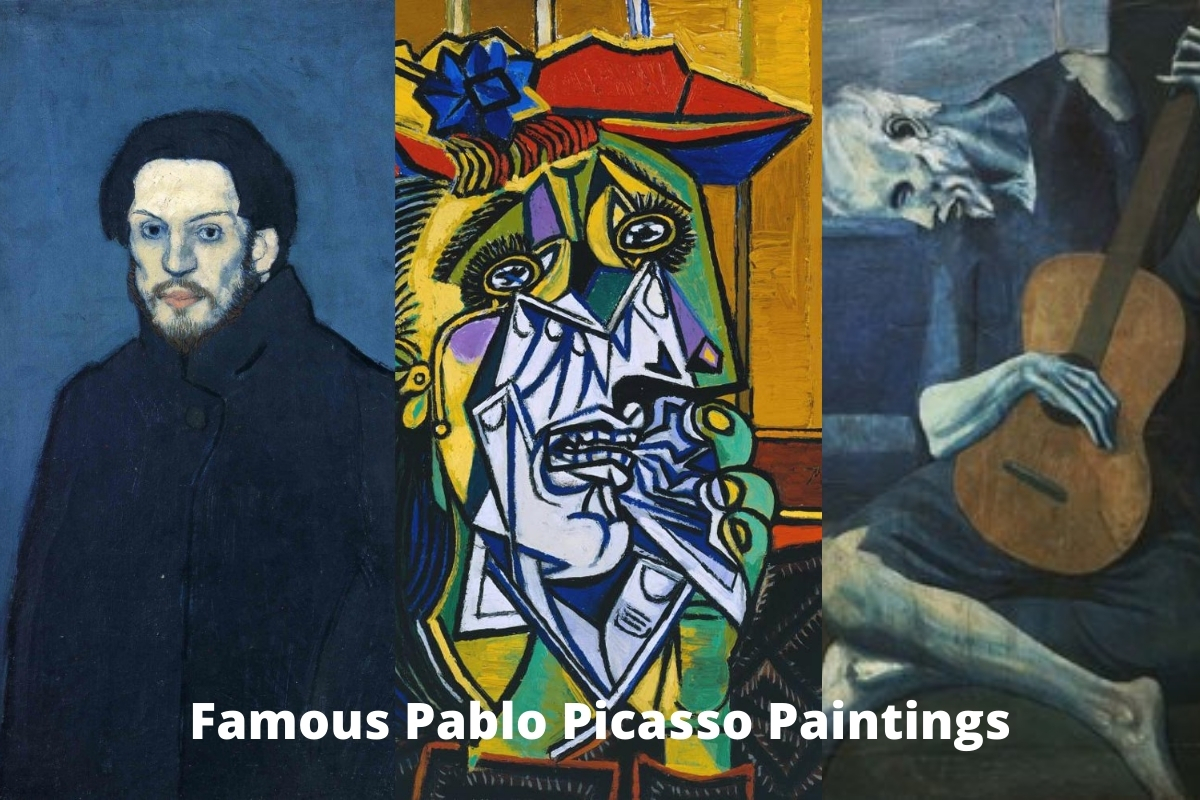 Pablo Picasso was a Spanish painter, sculptor, and printmaker. He is one of the most recognized artists of the 20th century.

He has made an indelible influence on popular culture and modern art.

Picasso’s artistic style changed throughout his career, but he always maintained a unique insight into the human condition that would never be equaled by any other painter.

Pablo Picasso’s art style was characterized by large, colorful surfaces and distorted proportions in his paintings. His work has been considered to be revolutionary because his diverse techniques challenged traditional concepts of what paintings should look like.

His style is known for the use of bold, contoured lines. He often merged representational and abstract, with one on top of the other.

Picasso was a pioneer of the Cubism movement that explored the significance of geometric shapes in the context of painting. This technique has been, and still is used by many artists today who want to stress functionality over beauty.

Picasso was deeply affected by the horrors of the Spanish Civil War, which had begun on 17 July 1936 when General Francisco Franco led a military coup against the Spanish Republic.

Seven months later, Franco’s troops were in full control of the country. After visiting Barcelona in October 1936 and witnessing widespread destruction from heavy fighting, Picasso told his friend Joan Miró that he wanted to do something to show his anger.

He later wrote: “I’m going to paint something unbelievably huge… I’ll do it with all my rage.” He began making sketches for the painting on 2 December 1936.

Guernica has been described as the artist’s most powerful creation, and one of his few works on a truly epic scale.

The painting was created in response to the bombing of Guernica, a Basque Country town in northern Spain, by German planes commanded by General Franco during the Spanish Civil War. It depicts the tragedy and suffering of war with startling power.

The painting was completed by Picasso in 1937 and it has been considered to be one of his most famous works. It depicts the horrors of war, including violence and death.

The painting does not depict any specific battle or event, but rather all of the events that transpired during war.

” Les Demoiselles d’Avignon” is considered to be the first Cubist work of art. It is a painting created by Pablo Picasso in 1907. The painting was created during the height of his formative Cubism period and is one of the most important pieces in the history of modern art.

Picasso arrived in Paris at a time when there were many artists creating new, innovative styles of artwork. For Picasso, this meant that he was not yet pigeonholed into one style and could explore many avenues without much worry from critics or other artists.

This freedom gave him room to explore his creativity and experiment with different techniques and methods without feeling pressured to conform to what others were doing at the time.

The painting was created out of a mixture of styles that Picasso had been experimenting with during that period. It was an important moment in his career as it helped him break through to abstraction and to modern art.

This painting is also significant because when it was debuted in public, it shocked many people and caused a lot of negative reactions because they were not used to such paintings at the time.

Pablo Picasso was well-known for his bizarre interpretations of different characters he painted. Later in his life, he started to paint in more vibrant hues in order to convey the emotional importance of the subject.

The Weeping Woman is an oil on canvas work by Pablo Picasso that was completed in 1937 in France. Dora Maar, Picasso’s mistress and muse, is shown in the picture.

Picasso’s signature profile view of the woman’s face appears in this piece, but other minor details hint to a higher degree of perspective for the viewer to perceive.

The piece is primarily concerned with the woman’s face, which is shown in a variety of clashing colors and geometric forms. Picasso’s use of subtle blue hues on her face below the eyes, which seems to suggest that her face is covered in tears, emphasizes her high degree of emotional sorrow even more.

“Weeping Woman” shows a distraught female weeping and holding a handkerchief to her face to collect her profuse tears.

This universal picture of suffering is painted in the flattened manner of Picasso’s early analytical Cubism, which is distinguished by the use of angular and overlapping pieces of the subject’s face, as if painted from many perspectives at the same time.

Picasso spent most of his life in extreme poverty, and it is claimed that during this period he developed a strong sympathy with the world’s impoverished and oppressed.

The Old Guitarist was created in 1903, during a period when Picasso was believed to be almost bankrupt while living in Barcelona.

This time has been dubbed his ‘Blue’ phase, when he painted nearly every canvas in a drab monochromatic palette of blue, a hue that matched the kind of subject matter that he would address.

Picasso created this piece soon after his close friend Casagemas committed suicide as a result of a lengthy battle with mental illness and despair.

The artist dedicated this piece, as well as others during this time period, to concentrating on people who are often oppressed and burdened by the concerns and problems that so often consume humanity.

Because the whole work is done in a deep blue color, the painting conveys a strong feeling of desolation to the spectator.

The man in the picture is holding a guitar and seems to be playing a sorrowful song, his face set with agony and despair.

Picasso’s excellent use of the color blue, art critics and historians have observed, correctly imposes the feeling of melancholy that so many people experience in this piece.

The guitar is a break in the monochromatic blue’s subdued nearly flat, two-dimensional shapes, while the musician seems slumped down and sad.

Subsequent X-rays of the artwork showed the presence of a ghostly figure (a lady) that Picasso had begun to paint but then changed his mind and chose to paint over her.

Picasso was quite young in this famous self-portrait and was just twenty at the time, yet he looks much older in this picture. His face looks drawn and haggard as a result of the hard winter in Paris living a very downtrodden life.

He had just recently arrived in Paris and had yet to establish any meaningful friendships when he created this piece soon after the suicide of his friend Carlos Casagemas.

The death hit him hard and had a serious effect on his mental health.

This self-portrait is not Picasso’s first, but it is one of the earliest works of the Blue Period.

6. Girl before a Mirror

Pablo Picasso produced Girl before a Mirror in 1932 as an oil on canvas painting. The picture depicts Picasso’s mistress and muse, Marie-Thérèse Walter, standing in front of a mirror, gazing at her reflection.

During the 1930s, Picasso painted Marie-Thérèse many times. His pictures of her from 1932 were the first public exhibition of their secret romance during his marriage to Olga Khokhlova.

Picasso’s creative career was shaped by the year 1932. He had reached the age of 50 at this point in his life and had established himself as a significant artist.

Picasso was the curator of a retrospective show of his work at Galerie Georges Petit in 1932, which was an uncommon occurrence for an artist, and even more unexpectedly, Picasso seized charge of the curating.

Girl before a Mirror is a photograph of a lady gazing in a mirror, revealing a darker reflection of herself. The woman’s face has been split into two parts, one of which is painted in a peaceful, lilac color, and the other in a vibrant, yellow hue.

The reflection depicts the subject in a different light, making her seem older and with a sunken face, perhaps as a symbol of her death.

La Vie (The Life) is an oil on canvas work that was completed in May 1903 in Barcelona.

It is generally considered as the peak of Picasso’s Blue Period’s. Yet, at the time he was a 22-year-old unknown artist who had yet to make his impact on the world of art.

The interpretation of the mysterious composition has sparked considerable debate. One thing is clear is that it is Picasso’s homage to his close friend Carlos Casagemas who had committed suicide.

Picasso’s concern with life and death is completely represented in its somber mood.

Picasso claimed Ma Jolie, which means “my beautiful one,” was a reference to a famous music-hall song from the time, but the real meaning was kept hidden, known only to those close to his circle of acquaintances.

As the primary image fades into the depths of abstract surfaces and tiny details, the irregular forms and dark, brackish hues seem to communicate a deeper message.
Marcelle Humbert’s figure is constructed in a haphazard manner utilizing Analytic Cubism’s characteristic changing planes.

The six strings in the middle of the image are a reference to the guitar, while the triangle on the right seems to represent the woman’s elbow.

Three Musicians is the title of two collage and oil works by Picasso . Both were finished in 1921 in Fontainebleau, France, near Paris, and are excellent examples of the Synthetic Cubist style.
Each artwork depicts a Harlequin, a Pierrot, and a monk, who are said to be Picasso, Guillaume Apollinaire, and Max Jacob, respectively.

The Harlequin playing a guitar in the middle is a recurrent stand-in for Picasso himself throughout his work. Pierrot and Harlequin are standard figures from the ancient Italian comedy theater known as Commedia dell’Arte, which is a recurring subject throughout Picasso’s work.

Three Musicians seems to be a collage created from cut out pieces of colorful paper, despite the fact that it is an oil painting. The forms are reduced to angular patterns that interlock like jigsaw puzzles.

Three Musicians is part of a major change in Picasso’s work that happened after 1914. Picasso created just a few collages after 1914. Instead, he used Cubist techniques in the conventional medium of oil on canvas, allowing him to produce considerably bigger and more colorful works.

This new technique had a major advantage: oil paintings could be sold at much greater prices than collages.

Portrait of Gertrude Stein  is an oil on canvas portrait of the American writer and art collector Gertrude Stein. Picasso began working on the painting in 1905, but it was not completed until the following year.
It is regarded as one of Picasso’s most significant paintings from his Rose Period.

The picture exemplifies the geometric distortions and formal experiments that would come to define his work after the advent of Cubism.

Picasso’s artwork defied conventional portraiture conventions by portraying the subject as a huge, hulking figure staring blankly across the picture rather than at the spectator. Her figure is a round bulk, and she leans forward, her arms weightily resting on her knees.

This stylistic shift proved to be of enormous historical significance since it indicated the path Picasso would take step by step until the creation of cubism.