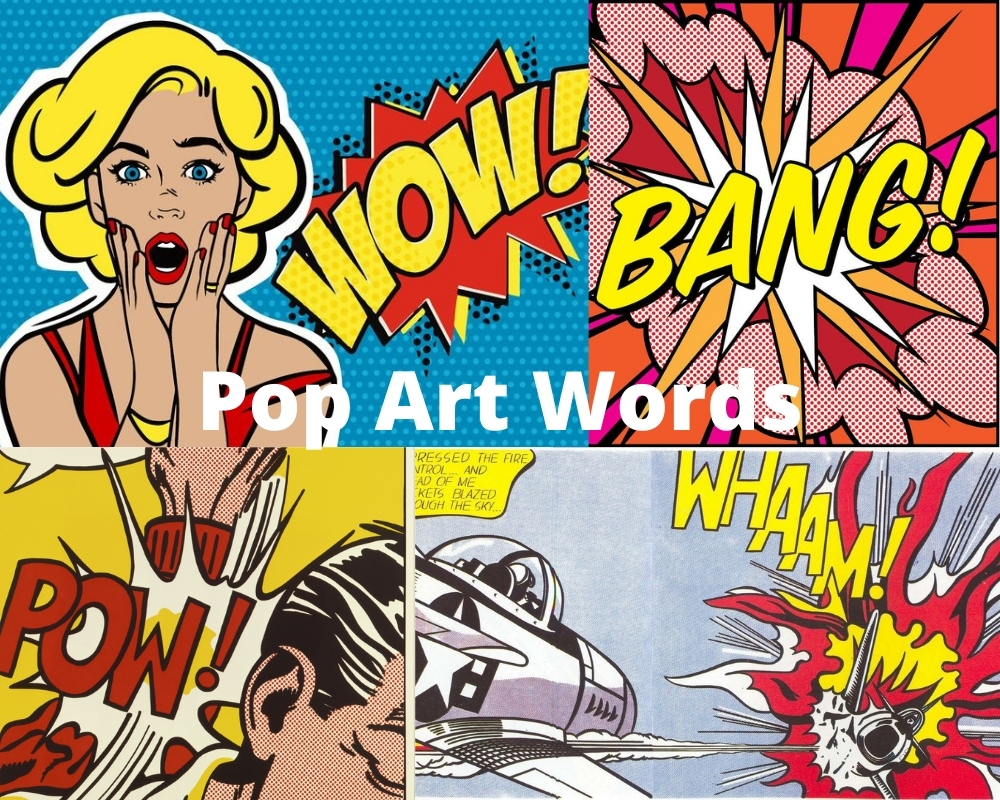 Pop Art bridged the gap between the worlds of fine art and mass media or commercial art, the emergence of pop art words as a spin off from Roy Lichtenstein’s first forays into comic strip inspired pop art images is somewhat of a strange one.

In many ways Lichtenstein’s images were a parody of the comic book style and he achieved this by exaggerating the traditional comic book techniques and structures in a very deliberate manner.

Comics were not the only thing that was used as an inspiration for pop art, all of popular culture was drawn from including large corporate brands, logos and various characters from the world of cartoons and television.

The most famous of all pop art words produced is “Whaam!” painted in 1963 by pop art artist Roy Lichtenstein.

It is a rather large diptych(two panels) painting measuring 68 by 160 inches and is based on a panel that appeared in the “Star Jockey” story from issue #89 of ‘All-american Men of War’ that was published by DC comics in 1962 see below:

Lichtenstein’s version omitted one of the speech bubbles, changed the colors, and exaggerated the lines of the original.

On the left panel a P51 pilot fires a missile at an on coming enemy plane and the speech bubble contains the following: ‘I PRESSED THE FIRE CONTROL… AND AHEAD OF ME ROCKETS BLAZED THROUGH THE SKY…’.

While on the right panel we see the exploding enemy with the signature ‘Whaam!’ in big, bold yellow.

The use of separate panels splits apart the action and the consequences of the action, Lichtenstein would later joke that: “Of course there is the humorous connection of one panel shooting the other.”

This exaggerated ‘whaam’ has since spanned thousands of copycat images and is now a very popular art lesson for school children in their early art education.

The words chooses are usually onomatopoeia words as in the world is spelt in a way that imitates the sound in which it makes.

In an age of digital imaging and drawing software creating these kinds of images is available to almost anyone at the click of a button.