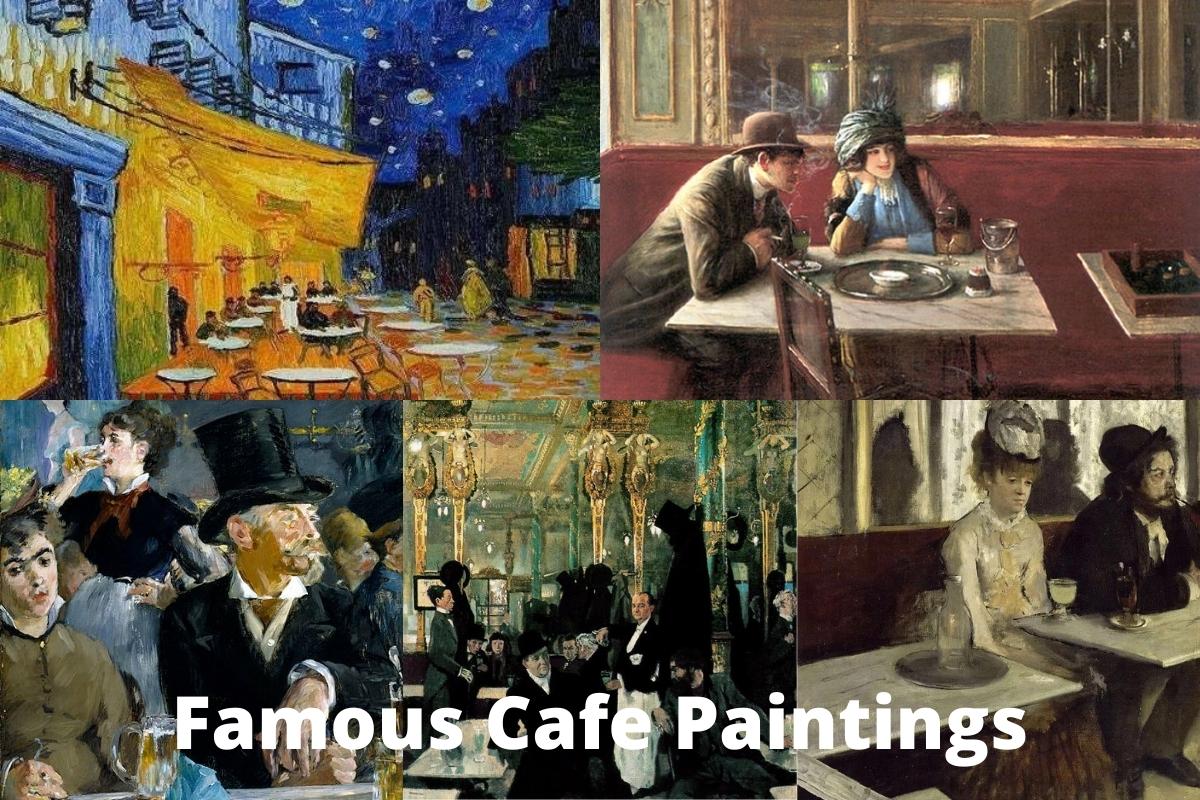 Many artists and intellectuals have used the humble cafe as a meeting point for centuries, so it may come as no surprise that the cafe would become the subject matter for many great painters.

The impressionists were the first group to really produce a lot of cafe paintings as they captured ordinary people in everyday life in Paris.

It is Vincent van Gogh’s Post-Impressionist Cafe Terrace at Night that is arguably the most famous painting of a cafe with the image being reproduced millions of times on posters, postcards and calendars.

Vincent van Gogh created Café Terrace at Night in 1888 as an oil painting. It is also known as The Cafe Terrace on the Place du Forum, and it was originally named Coffeehouse, in the evening (Café, le soir) when it was initially displayed in 1891.

In mid-September 1888, Van Gogh painted Café Terrace at Night in Arles, France. The picture is not signed, however the creator describes and mentions it in three letters.

Visitors may stand in the north-eastern corner of the Place du Forum, where the artist has set up his easel. In 1990 and 1991, the property was renovated to look like van Gogh’s artwork.

He gazed south, towards the artificially lighted patio of the popular coffee shop, as well as into the imposed darkness of the rue du Palais, which went up to a building structure (to the left, not seen) and, beyond this structure, the tower of a former church, now Musée Lapidaire.

Van Gogh indicated a lighted store and some branches of the trees surrounding the area to the right, but he left off the remnants of the Roman monuments directly behind this little shop.

The work is presently on display in the Kröller-Müller Museum in Otterlo, the Netherlands.

L’Absinthe (English: The Absinthe Drinker or Glass of Absinthe) is an 1875–1876 artwork by Edgar Degas. Its original title was Dans un Café, which is still used today.

A sketch of a French café and Figures at Café were two more early works. When the picture was shown in London in 1893, the title was altered to L’Absinthe, the name by which it is now well recognized. It is in the permanent collection of Paris’s Musée d’Orsay.

The picture, which was painted between 1875 and 1876, depicts a lady and a man seated side by side, enjoying a glass of absinthe. They seem sluggish and lonely.

Critics lambasted the film when it initially premiered in 1876, calling it ugly and filthy. It was stored until 1892, when it was re-exhibited, but it was met with scorn once again.

The artwork was presented again in 1893, this time under the title L’Absinthe, at the Grafton Gallery in England, where it aroused even more controversy.

English reviewers thought the people and drinks shown in the artwork were terribly degraded and vulgar. Many saw the picture as a slap in the face of morals.

The Café-Concert is an 1879 painting by the French painter Édouard Manet, who often drew café scenes representing social life towards the end of the nineteenth century, such as those represented in this work.

The Brasserie Reichshoffen on Boulevard Rochechouart has been recognized as the location. Manet depicts men and women at Paris’s new brasseries and cafés, providing the observer with a different perspective on modern Parisian life.

Manet claimed to be creating des oeuvres sinceres, or “true works.” The ladies shown in these episodes were taking risks in terms of perception and morals.

Concepts of traditional composition are discarded in this picture. The figures of the people shown are not precisely defined, but are sculpted using brushstrokes.

Instead than painting layers of pigments and glazes over a black backdrop, the colors are applied directly to the canvas with loose, repeated strokes.

It depicts three people eating lunch at the Maison Fournaise, which is situated on the Île des Impressionnistes (also known as the Île de la Grande Jatte) on the Seine River near Chatou, west of Paris. Outside the restaurant, a canoeist is seen paddling along the river.

The picture is now on display at the Art Institute of Chicago.

In his 1881 Luncheon of the Boating Party, Renoir also depicted the Maison Fournaise.

It was created during the years of 1892 and 1895. A self-portrait of the artist in profile is shown in the backdrop. It is one of many Toulouse-Lautrec pictures representing the Moulin Rouge cabaret, which opened in Paris in 1889.

The picture depicts a group of three men and two women seated around a table on the cabaret floor towards its middle.

The short-statured Toulouse-Lautrec himself stands in front of and close to Dr. Gabriel Tapié de Céleyran in the center-left backdrop.

At the Moulin Rouge is part of the Art Institute of Chicago’s Helen Birch Bartlett Memorial Collection.

The title is written lower right under the signature. Yale University owns the picture, which is presently on display at the Yale University Art Gallery in New Haven, Connecticut.

The Café de la Gare, 30 Place Lamartine, is represented in the inside.

The painting has been described as one of Van Gogh’s masterpieces and one of his most recognized works.

Unlike traditional Impressionist works, the painter does not express a neutral attitude toward the universe or an attitude of appreciation of nature’s or the moment’s beauty.

The picture exemplifies Van Gogh’s use of “suggestive color” or, as he would soon describe it, “arbitrary color,” in which the artist filled his works with his emotions, as was characteristic of what became known as Expressionism.

Paul Gauguin painted the same site as Van Gogh above as a backdrop to his picture of Madame Ginoux shortly after his arrival in Arles.

While Van Gogh’s picture represents the café as an isolated space, Gauguin’s Night Café at Arles combines the themes of solitude (to the left of the painting) with energetic socializing (in the middle, behind Mme. Ginoux).

It was also purchased by Ivan Morozov and is presently on display at the Pushkin Museum of Fine Arts.

Van Gogh painted “La Guinguette” in 1886 at the time Montmartre would have had a fairly small village like feel to it even though it was a part of the city of Paris.

This cafe scene has a much darker overall tone to it when compared to some of van gogh’s works from the same time period namely Cafe Terrace at Night.

The color palette was in stark contrast to some of the more famous patrons of the cafe at time; the impressionists.

Orpen was a talented draughtsman as well as a popular and economically successful portrait painter for Edwardian society’s upper crust.

Daniel Nicholas Thévenon, a French wine trader, designed and established The Cafe Royal in 1865. Due to insolvency, he was forced to depart France, arriving in Britain in 1863 with his wife, Célestine, and just five pounds in cash.

He changed his name to Daniel Nicols, and the Café Royal prospered under his administration – and subsequently that of his wife – and was once thought to have the world’s biggest wine cellar.

By the 1890s, the Café Royal had established itself as the place to see and be seen.

William Orpen painted this scene in 1912 and it is currently housed in the Musée d’Orsay in Paris.

Pictures of the Champs Elysees, cafés, Montmartre, and the Seine banks are meticulously detailed depictions of ordinary Parisian life during the “Belle Époque.” He also painted religious themes in modern settings.

He painted several pictures of Parisian everyday life in a manner that is midway between Salon academic art and Impressionist painting. In 1894, he was awarded the Légion d’honneur.