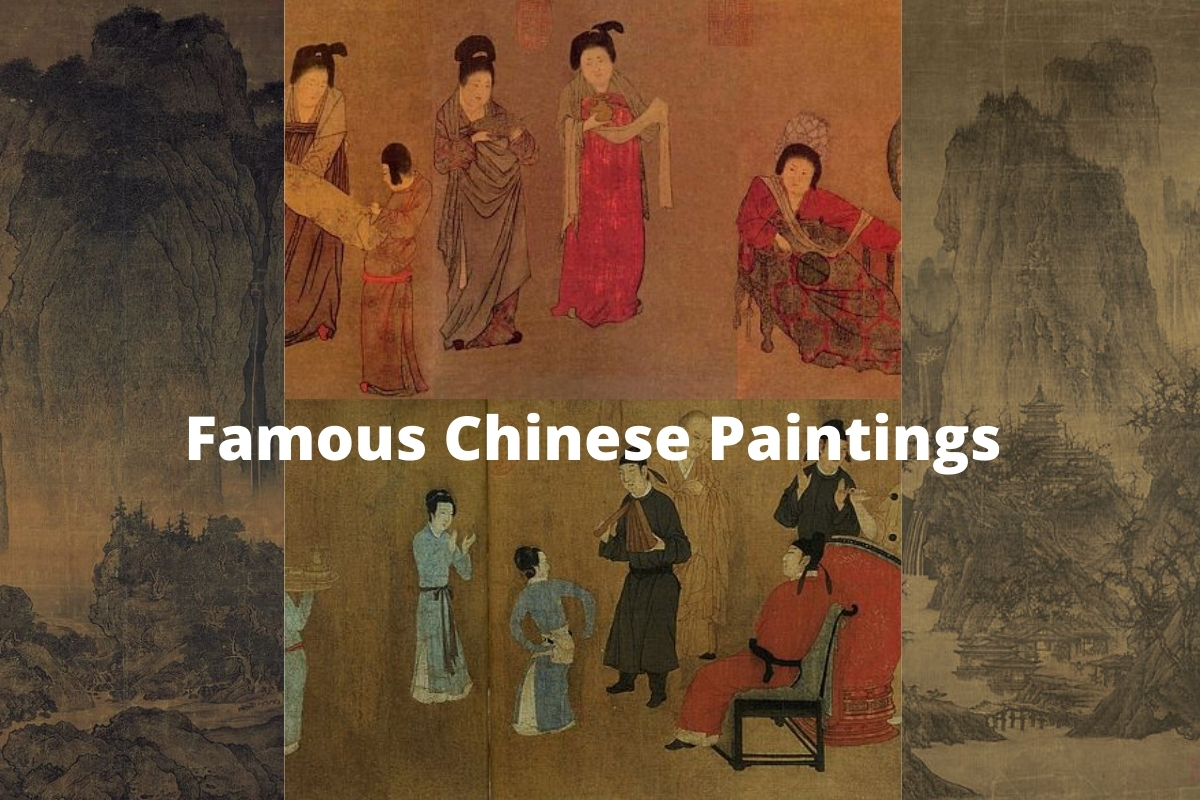 China is one of the most culturally unique nations on Earth and this fact is evident through the country’s storied art history. Dating back thousands of years, Chinese art focused on many different areas including landscapes, animals, and other beauties that were depicted with careful detail.

The most popular style of Chinese painting is considered a traditional method of depicting various scenes that were often incorporated with calligraphy.

Instead of being done on large, flat canvases, Chinese paintings were mostly created with large scrolls that were hung for display. There were artists that also utilized folding sheets and other methods, including large murals.

Some of the most reputable Chinese artists in history were regarded with high honors by the ruling dynasties of their specific time periods.

As a style of painting that was unlike any other in the world, Chinese art is remembered today for its distinct characteristics and incredible landscapes that can be seen throughout the sprawling nation.

Here are 10 of the most famous Chinese paintings ever done.

Fan Kuan epitomized everything that was revered as a true Chinese master artist. He was known as a nature-lover who would spend long stretches of time alone in the mountains or other wilderness areas of mainland China.

There are few other details that can be known about Kuan, one can draw a considerable impression of him through the many paintings that he produced during the Song Dynasty shortly after 1000 C.E.

During the upheaval of the Five Dynasties period, many artists fled to the safety and seclusion of the mountains. Kuan was apparently one who did so as many of his paintings are centered around majestic scenes of mountain landscapes.

His work known as Travelers Among Mountains and Streams is considered his most well-known, as well as arguably one of the most famous Chinese paintings ever done. The painting is thought to be a representation of the southern Shaanxi area.

It features a giant rock face surrounded by massive boulders at the foot. The different levels of perspective are meant to show the vastness of the Chinese wilderness in all its grandeur.

Another famous painting from the Song dynasty is known as Spring Festival on the River. This painting was done by Zhang Zeduan sometime during the late 11th or early 12th century.

Focused on a scene of what many consider to be the common, daily life of the people of the dynasty’s capital city, Bianjing, Zeduan uses great detail to depict every minute figure and natural element with a sense of individual beauty.

The Spring Festival was also known during this time as the Qingming Festival and was a time of intense prayer and honoring the tombs of the ancestors. A closer look into Zeduan’s work reveals many different classes of people that include the wealthy down to the peasants involved in the bustling city in all its glory.

Many art historians and critics consider this to be among the most iconic Chinense paintings ever done. Many copies have been made with the original copy still remaining to this day in a prominent Chinese art museum.

Some of the most famous Chinese paintings ever created were done so on silk surfaces that have lasted throughout history. One such painting was done by Yan Liben in the 14th century.

Titled Emperor Taizong Receiving the Tibetan Envoy, this famous work features a scene that depicts a historic event in Chinese history that forever shaped the course of history for both China and Tibet.

The work features the marriage of Emperor Taizong of Tang’s daughter to the Tibetan King Songtsen Gampo in 634.

The Emperor is seen in the painting as being carried upon a sedan with maids encircling him. The painting that remains today is thought to be a copy of the original work that is believed to have been done in the Song Dynasty.

One of the more highly praised artists from early Chinese history is Gu Kaizhi. Born in the 4th century, Kaizhi is best known for his works that feature various portraits and scenes from poems that were also very popular during the time period.

His painting titled Nymph of the Luo River was painted on a hand scroll as known as an illustration of a Daoist poem.

This work was done in what art historians and critics consider to be a classical pre-Tang dynasty style. It features multiple scenes from the famous poem and also exhibits what was regarded as traditional dress and behavior of ladies of the Chinese court during this time period.

The painting is said to closely correlate with the original text of the poem in a way that illustrates each individual scene. The poem was considered to be a didactic Confucian work that remains as one of the most historically significant works in Chinese history.

Another one of the most famous Chinese paintings was done on a massive hanging scroll in the 10th century by an artist known as Li Cheng.

Titled A Solitary Temple Amid Clearing Peaks, this particular work features a beautiful landscape scene that includes a mountain village flanked by a towering outcrop high above the traditional Chinese structures.

This particular work is one of the only remaining paintings that is believed to have been done by Cheng. The scene is considered to be one that truly captured life in the remote mountainous villages of the time period in which Cheng lived.

He painted this work with incredible detail down to the smallest tree branch, as well as the steam rising from the depths of the valley below.

Widely considered to be among the most iconic works in Chinese art history, the work known as Noble Ladies in Tang Dynasty was created by two of the most noteworthy painters of the Tang Dynasty, Zhang Xuan and Zhou Fang.

Their painting was significant among a slew of other works from this period which also featured women of high status engaged in various activities.

The particular style of painting is considered to focus on the grace, beauty, and honorable life that Chinese women of high status were known for during the Tang Dynasty, which lasted from the late 7th century to the early 10th century.

Gu Hongzhong was known among artists of his time period as one of the most masterful painters in China. He lived during the Five Dynasties period, which stretched through the short period from 907 to 960. His work titled Han Xizai Gives A Night Banquet is perhaps the most famous Chinese work from the period that still survives to this day.

This painting was done on a large, silk scroll and is one of the more colorful pieces of artwork from the Five Dynasties time period.

It features a minister of the Southern Tang emperor Li Yu known as Han Xizai. The painting is split into five different parts and features Xizai, who was known as quite the socialite during this time period. Xizai is seen enjoying dancing and music with other guests in the work.

This painting was viewed as a representation of a controversial relationship between the emperor and Xizai. It remains as a historically significant work that is among the most famous Chinese paintings ever done.

Among the most famous Chinese paintings, one relatively modern work need be included as it represents a style of traditional Chinese painting that dates back many hundreds of years. Qi Baishi painted his famous work, Eagle Standing on Pine Tree in 1940.

The work was viewed as a response to the internal struggle among Chinese nationals, as well as the threat of foreign attack from nations like Japan in the 1930’s.

The painting features a bold, strong design that is depicted in a simple black and white image of an eagle perched atop a pine tree branch.

While the work might initially appear to be insignificant to the casual viewer, it carries with it a significant amount of metaphorical meaning for the struggle that many Chinese people endured during the early portion of the 20th century.

Han Huang was a well-known prime minister of China during the Tang Dynasty which lasted from 618 to 907. He was one of the more brilliant leaders of the time period and was also celebrated as a gifted artist. His work known as Five Oxen is still revered as one of the most famous Chinese paintings ever created.

This particular work prominently features oxen, which were regarded as sacred animals in Chinese culture during this time period. The painting was lost as recently as the year 1900 during a brief occupation by the Eight-Nation Alliance, but resurfaced again in 1950.

While many paintings from this time period in Chinese history are centered around various animals like birds, flowers, or various societal elites, Huang chose to paint a collection of oxen, which were regarded as a symbol of strength and continuity in Chinese culture.

Wu Guanzhong is a Chinese painter that is hailed as one of the most influential artists of the modern era in the historic nation.

He has painted many works that virtually launched a new style of modern Chinese artwork in his lifetime, including his most famous work titled Water Village in Jiangnan.

Considered a trailblazer among Chinese artists during the 1940’s, Guanzhong’s career didn’t take off until later on in his life when he developed his own, unique style of painting.

This work was done in 1989 and was exhibited in several prominent art museums throughout China. It is a very simple painting that consists of large swaths of white surfaces that are outlined by sharp, bold black edges.

Guanzhong’s simple, yet straightforward style of painting captured the attention of both Eastern and Western art critics and enthusiasts in a was that brought new focus on Chinese culture as a whole.

Guanzhong painted many additional works that featured birds, plants, landscapes and other scenes, but few retained the high level of this painting, which was considered to be one of the most influential pieces in modern Chinese art. It is regarded as one of the most famous Chinese paintings of all time.