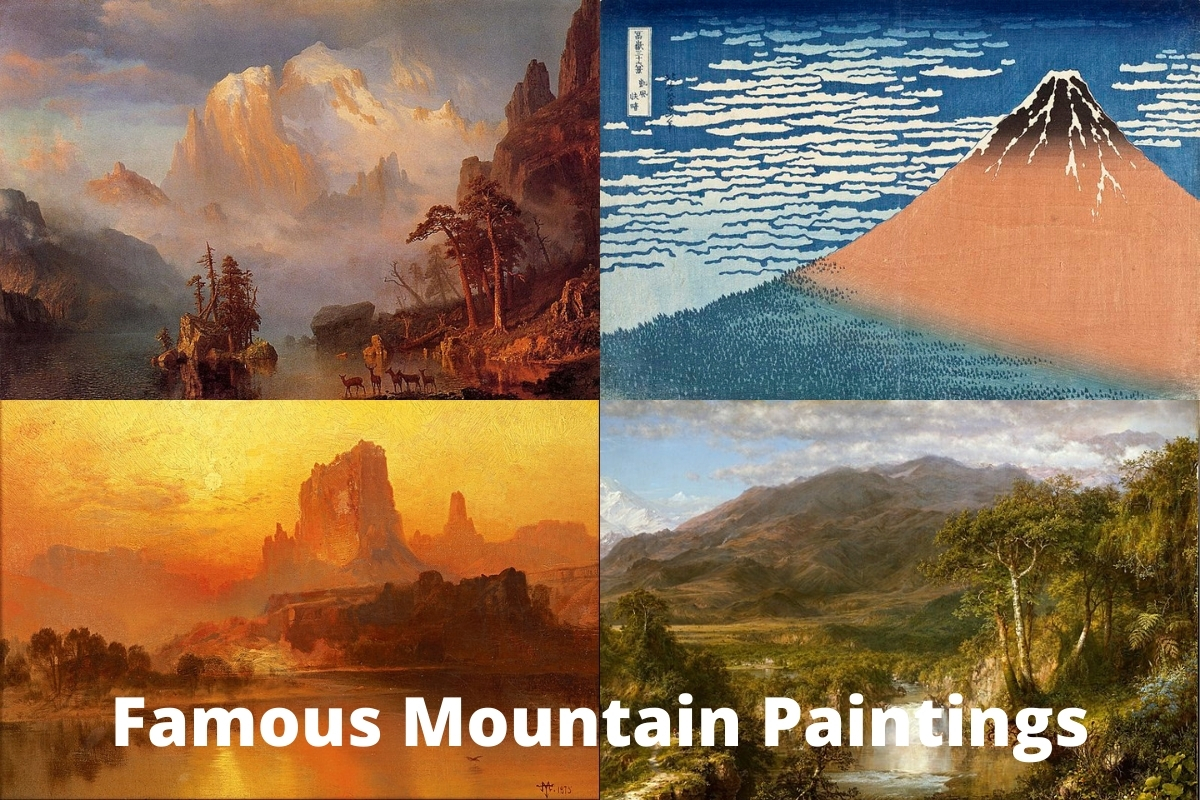 Landscape and nature paintings have been some of the most popular genres for artists throughout human history. It’s clear that mountains often serve as a symbol for a variety of things in art such as a powerful obstacle, continuity, God, and many other things.

Artists from all across the world have often used mountains in their works to emphasize a sense of power from both the divine and nature.

Mountains usually dominate the landscape and some artists have painted entire series of works dedicated to a single mountain or the area around certain mountains.

Their snow-covered peaks provide a stark contrast to the lush green valleys and lowlands that lie beneath mountains.

In the last few centuries, mountain landscapes have become quite popular with artists placing special consideration on what these enormous landmasses symbolize for themselves and the viewer.

In this article, we will examine some of the most famous mountain paintings ever created and take a closer look at the motivations each artist had in producing these works.

Albert Bierstadt was one of the most brilliant landscape artists to ever live. During his career, he produced a number of works pertaining to some of the most strikingly beautiful landscapes in the United States.

Many of his best paintings focus on Yosemite Valley and the mountain’s surrounding the famous space which was designated as a National Park in 1890.

Bierstadt’s 1865 painting highlighted one of the most breathtaking scenes from the Yosemite area, which was the valley itself.

He was a celebrated landscape artist and had already amassed quite a following among art enthusiasts in the United States due to his powerfully realistic depictions of scenes such as this.

The painting is titled Looking Down the Yosemite Valley. It is said by art historians that Bierstadt ventured to the valley every afternoon for many weeks or months in his efforts to capture the perfect display of light as it shimmered and reflected off the walls of the mountains on either side of the valley.

2. The Wanderer above the Sea of Fog – Caspar David Friedrich

Caspar David Friedrich was a German painter who was very much stricken with what is known in his home country as wanderlust, or the insatiable desire to travel the world and see all its beauty.

He spent a great deal of time travelling to various locations throughout the world to behold the natural beauty contained in them.

Friedrich is recognized as one of the most prolific painters from the Romanticism era and his works were characteristic of the different elements that brought fame to so many of his paintings.

Undoubtedly, his most famous mountain painting is titled The Wanderer above the Sea of Fog. It was completed in 1818 and depicts a single man standing on a rocky outcrop overlooking a sweeping mountain range that is blanketed in fog.

Friedrich’s casual brush strokes and intense detail in the foreground seem to create the sense that the man is standing with his face to the wind as the fog is beginning to be blown away.

The work is symbolic of Friedrich’s own fascination with such landscapes and many art critics believe the man in the painting is a depiction of himself.

3. The Heart of the Andes – Frederic Edwin Church

Another one of the greatest mountain paintings is a work that seems to be almost cinematic in nature as it features a wide view of a lush valley with an imposing mountain in the distance.

Frederic Edwin Church was a well-known American landscape painter who is remembered as a pivotal member of the Hudson River School, which included a number of distinguished landscape artists from the United States.

One of his most notable artworks is titled The Heart of the Andes. It was painted in 1859 and depicts a scene from the Andes mountain range in South America.

During this time period, various American artists ventured to the South American continent to capture the beauty of the mountain ranges and other areas.

In this work, the viewer sees a cascading waterfall in the foreground followed by the valley that stretches all the way up to the edge of the mountain range.

An even taller, more domineering mountain is seen in the left side of the background with its snow-covered ridges and peaks.

Katsushika Hokusai is one of the most celebrated artists from Japanese history. Many of his works focused on natural settings such as mountains or oceans with a few blending both together.

He painted in a very distinct, colorful style that often highlighted the contrast between certain elements such as a mountain and its lower valley.

One of his most notable paintings is titled South Wind, Clear Dawn (Red Fuji). The work was part of a 36-painting series that focused on the many different depictions of Japan’s legendary Mount Fuji.

Completed in 1832, Hokusai’s works were still not allowed to be sold outside of his native Japan, but many of his paintings and copies of them would find their way into the hands of American and European art collectors.

This painting depicts the unique red coloration that Mount Fuji is known to have in the right conditions at dawn. Hokusai’s inclusion of a bright blue sky next to the mountain’s jutting peak further emphasizes the degree to which Mount Fuji seems to dominate the surrounding landscape.

Paul Cézanne is remembered as one of the most iconic French painters in history and one that truly shaped the evolution of art in the Post-Impressionist movement and onward.

He painted many works pertaining to various landscapes and mountains, but none drew as much of his attention as Mont Sainte Victoire, which is a massive limestone ridge located in the south of France.

Cézanne actually devoted dozens of paintings to this one mountain and is known to have painted a variety of different angles and depictions of this famous landscape. The most notable of these works is simply titled Mont Sainte Victoire (Courtauld).

Completed in 1887, this painting contrasts the bright and playful colors of the fields in the valley below with the mountain’s bleak slope.

Many artists chose to portray the mountains that they painted in contrast to the dawn or setting sun as this provided an exceptional scene of both the sun’s incredible beauty combined with that of the rocky peaks of the mountains.

One mountain painting in particular that includes intense levels of sunlight was done by Thomas Moran, an American painter and printmaker who worked during the late 19th and early 20th centuries.

The painting depicts the incredible mountains that seem to burst forth from the ground next to the Green River in southwestern Wyoming.

This 1875 work is nearly unmatched in the artist’s ability to blend sunrise and mountain landscape together into one breathtaking work.

Thomas Cole is often regarded as the father of American landscape painting as he founded the Hudson River School in the early 1800’s.

He regularly focused on landscapes that included mountain ranges as they added to the variety of landscape that added to the mystique and wonder that many in the United States and Europe had never laid eyes on before.

One of his most famous works was a series titled The Voyage of Life, Childhood. These paintings were done between 1844 and 1848 and feature four distinct paintings that each represent a different stage in life.

Each of the majestic landscapes features a boy who grows into an old man over the course of the works who is guarded by an angelic figure.

Another one of Albert Bierstadt’s mountain paintings involves the illustrious peaks of the Rocky Mountains that span across much of the western United States.

During the early to mid-19th century, many Americans living in the eastern half of the country had not yet laid eyes on this majestic mountain range that stretches for thousands of miles.

Many had only read about it in books until they were able to view works by artists such as Bierstadt, who had traveled to this part of the country.

He would capture much of the wonder and beauty associated with the Rockies in one work known as The Rocky Mountains.

Painted in 1863, Bierstadt’s work drew widespread acclaim and elicited even more fascination from the American public about what kind of land lay beyond the Mississippi River.

9. Scene from ‘The Last of the Mohicans’: Cora Kneeling at the Feet of Tanemund – Thomas Cole

By the early 1800’s it was becoming apparent that many of the Native American peoples and tribes who had inhabited the land in what became the United States were quickly being pushed out—even to the point of extinction.

A famous novel by James Fenimore Cooper told the story of the Mohican tribe as it was engaged with a brutal struggle with settlers and eventually driven off their homeland. The book was an instant classic and remains so even today.

One of the most famous american paintings ever created is based on this story and captures one of the most striking scenes from the book when the tribe gathers at the foot of White Mountain in New Hampshire.

Thomas Cole rendered this beautiful depiction of this scene in a painting titled Scene from ‘The Last of the Mohicans’: Cora Kneeling at the Feet of Tanemund, which was completed in 1827.

The work features the tribe gathered in a circle on the edge of a cliff at an overlook near White Mountain. This painting also utilizes subtle differences in light and dark as the setting sun can be seen sweeping across the landscape.

Another one of Thomas Moran’s great masterpieces was created in 1882.

He was known to paint various landscapes and later in his career would focus on thoses which featured elements of rain and other weather events that changed the color and contrast of the mountains and other elements in his paintings.

One such work was focused on a famous mountain pass in the heart of Scotland. This painting is titled Pass at Glencoe Scotland and features an all-too-common rainstorm blowing across the distant mountains while a calm stream babbles toward the viewer in the foreground.

The colors of the painting combined with the clouds and weather create a memorable scene that is vivid enough for the viewer to almost feel the cool rain moving toward them.