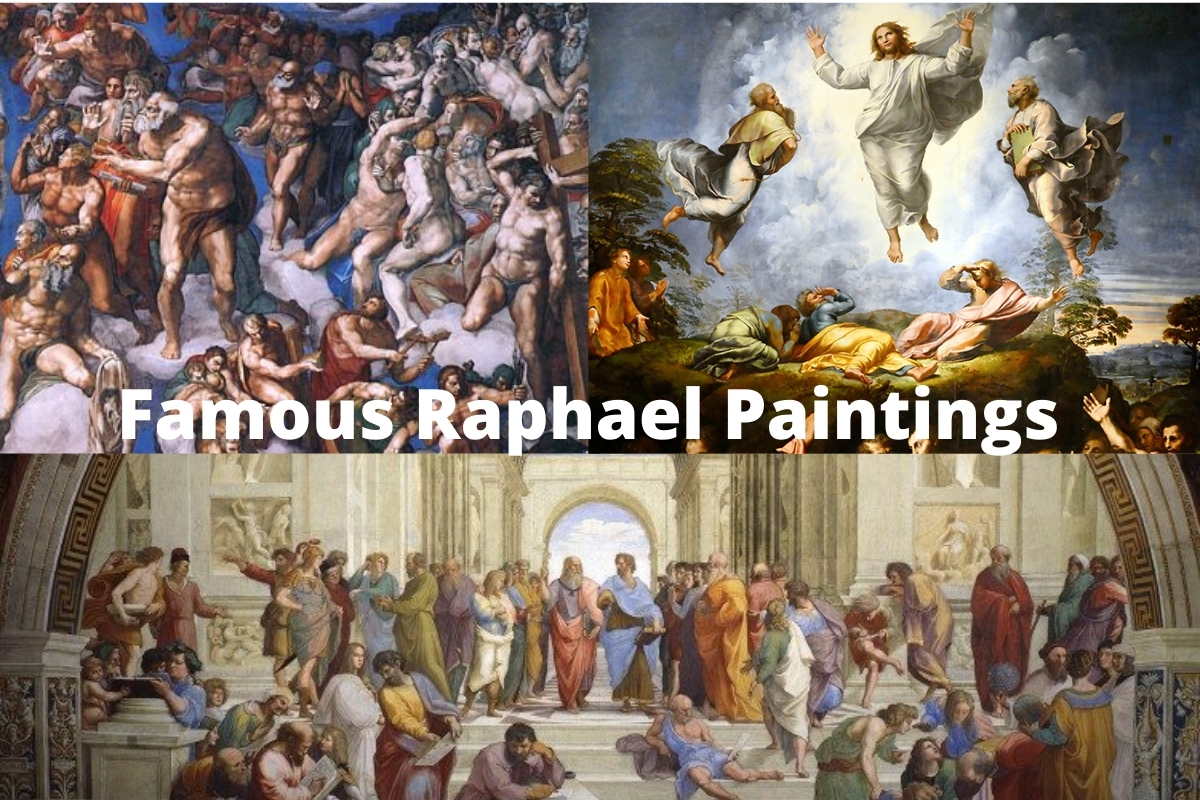 Raffaello Sanzio da Urbino, who is best known simply as Raphael was born in Urbino, Italy in 1483 and is one of the most accomplished artists of the high renaissance period.

Born to an artists father he studied painting from an early age, and showed great promise.

Following his father’s untimely death Raphael aged eleven had to take control of his fathers studio.

By age seventeen he secured an apprenticeship under Pietro Vannunci in Perugia, Italy where he developed his painting style further.

The paintings he created were so popular and admired that he received many commissions from the Vatican and other wealthy families of these it is his large fresco’s that he is best remembered for.

Raphael’s work is characterized by a sense of peace and serenity that it provides to viewers, as well as his use of color, which was cleverly combined with perspective and dramatic lighting to depict three-dimensional forms on a two-dimensional surface.

Raphael also had an uncanny ability to capture emotions on faces with incredible detail.

1. The School of Athens

The School of Athens is one of Raphael’s most famous paintings and one that he considered to be among his three most important works.

Raphael painted The School of Athens at the Apostolic Palace in the Vatican between 1509 and 1511.

It is located on the second level of the Vatican Palace’s North wing, in the Stanza della Segnatura.

It is one of four huge frescoes painted in that chamber, each symbolizing a different area of human knowledge: Justice, Philosophy, Poetry, and the School of Athens.

The painting is a representation of a philosophical discourse in which Plato and Aristotle discuss a variety of topics, from the meaning of life to the name change from Athens to Rome.

The painting illustrates Raphael’s understanding that intellectualism and academic research are not incompatible with Christian beliefs.

The Sistine Madonna is an oil painting on canvas of the Virgin Mary with Jesus Christ. It was painted by Raphael in roughly 1513, commissioned by Pope Julius II for the church of Santa Maria del Popolo in Rome.

The painting depicts the Virgin Mary, sitting with her baby Jesus across her lap, flanked Saint Sixtus and Saint Barbara. The Virgin’s expression is serene yet sorrowful while Jesus seems to be looking at us, our gaze returned.

Raphael draws an interesting distinction between Mary and Jesus’ expressions by using color – Mary’s face is covered in rich colors, while Jesus’ face is pale and features less detail. This makes it seem like he’s looking beyond this world – focusing on something more important than what he sees in front of him (the physical).

The artwork was created for the Benedictine Monks of the San Sisto Monastery in Piacenza and was placed prominently near the alter.

It eventually made its way to Germany in 1754, when it was given to King Agustus III of Saxony, causing significant controversy about the boundaries between art and religion.

After WWII, the artwork was sent to Moscow before returning to Germany in 1955.

3. Disputation of the Holy Sacrament

The fresco of the so-called Disputation of the Most Holy Sacrament may be found on the wall opposite the School of Athens, which corresponds to Theology.

Raphael has produced a scene that spans both heaven and earth in the artwork.

The figures in the fresco have vertical similarities, as if to indicate that what is in heaven is likewise on earth.

The Virgin Mary stands at Christ’s left, her hands clasped on her breast. Below her, on the terrestrial plane, there is a person with the same look just near the table.

Saint John the Baptist, with his hand outstretched, stands at Christ’s right. Julius II is below him, with his arm raised in the same manner. As you move your eye to the left and right of both planes, you will see figures above with their counterparts below.

Raphael’s last work, The Transfiguration, is a masterpiece of the Italian High Renaissance. Raphael worked on the altarpiece for the Narbonne Cathedral in France until his death in 1520, when it was commissioned by Cardinal Giulio de Medici, the eventual Pope Clement VII (1523–1534).

The fundamental concept behind the painting – to illustrate how Christ’s life and teachings changed people – has been wonderfully portrayed in this piece of art, which is an excellent example of Renaissance style painting.

This painting’s color palette is extremely appealing and eye-catching, and it pulls people in.

The Transfiguration was created using the classic fresco method, which means that there isn’t much detail or shading. Raphael has made up for it by painting vivid depictions of individuals who have been affected by Christ’s message.

5. The Triumph of Galatea

The Triumph of Galatea is a fresco painted by the Raphael at the Villa Farnesina in Rome about 1512.

In Ovid’s Metamorphoses the tale of Acis, a mortal peasant shepherd who falls in love with Galatea, a Nereid or water nymph, in his Metamorphoses.

Raphael did not depict any of the story’s pivotal events, instead he focuses on Glatea later in life. Galatea is surrounded by various marine creatures whose shapes are influenced by Michelangelo’s paintings while the brilliant colors and ornamentation are influenced by ancient Roman art.

A Triton (half man, part fish) kidnaps a sea nymph on the left, while another Triton uses a shell as a trumpet behind them. Galatea is drawn by two dolphins in a shell-chariot.

La Fornarina is an oil on panel painting by Raphael, depicting his lover Roman, Margherita Luti who refused to marry him.

In fact, there are multiple theories as to who exactly she is – from Raphael’s wife to his mistress – but this information remains uncertain.

We know the picture was finished about 1520, the year Raphael died and was most probably sold off by his assistant following his death.

Raphael’s picture of La Fornarina was deemed scandalous at the time since the bare-breasted lady was wearing a bracelet with the artist’s signature: Raphael Urbinas.

Raphael is said to have used Margherita Luti as a model for hundreds of drawings.

It was painted between 1511 and 1512 as part of Raphael’s contract to adorn the chambers of the Apostolic Palace in the Vatican with paintings. It may be found in the Stanza di Eliodoro, the chamber that bears its name.

The Expulsion of Heliodorus from the Temple depicts a biblical scene from 2 Maccabees (3:21-28). Seleucus IV Philopator, King of Syria, orders Heliodorus to take the wealth kept in the Temple in Jerusalem.

In response to the high priest Onias III’s prayers, God sends a horseman aided by two youths to drive Heliodorus away.

Raphael added self-portrait at the far left of the painting.

Raphael’s most renowned frescoes as mentioned above may be seen in the Room of the Segnatura.

They are not only the first work by the great Renaissance painter to be completed at the Vatican, but they also signal the beginning of the high Renaissance.

The Stanze were designed as a set of apartments for Pope Julius II. In 1508 or 1509, he commissioned Raphael, a relatively young artist from Urbino, and his workshop to completely remodel the apartments’ interiors.

9. The Marriage of the Virgin

The Marriage of the Virgin, also known as Lo Sposalizio, is an oil painting finished in 1504 for the Franciscan church of San Francesco, Città di Castello, depicting a marriage ceremony between Mary and Joseph.

Raphael’s early era comes to an end with this picture, which marks the beginning of his creative maturity.

When the he created the picture, he was 21 years old, had finished his apprenticeship at Perugino’s studio, and was preparing to go to Florence.

The artwork depicts the three Graces, Greek mythological characters who are believed to symbolize beauty, creativity, and fertility.

Raphael depicts three ladies in the nude (believed to be the artist’s earliest portrayal of the naked female form in both front and back perspectives, gently embracing each other) in both front and rear views.

The Three Graces is currently housed in the Musée Condé of Chantilly, France.