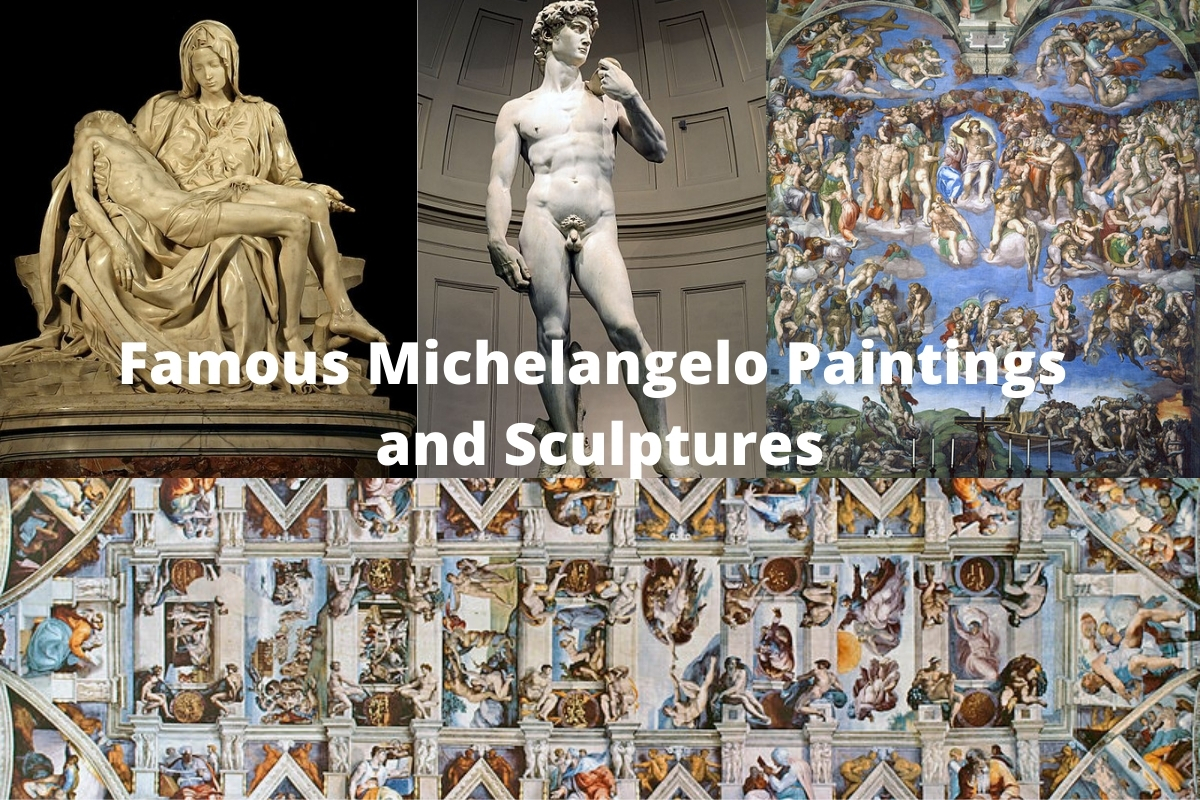 He was the youngest of six children from a well-off family. His father, Ludovico Buonarroti, was a member of the Florentine Woolcombers’ Guild and expected his son to follow in his footsteps.

Michelangelo however wanted to become an artist and spent most of his time drawing or sculpting.

Michelangelo was sent to a Florence grammar school at the age of six, but he showed little interest in education. He’d rather observe the artists in adjacent churches and sketch what he saw.

His father recognized he had little interest in the family’s financial company and at the tender age of thirteen consented to send him to be schooled as an apprentice by the painter Ghirlandaio where he would study draftsmanship and fresco painting.

A year later Michelangelo would be studying sculpture under Bertoldo di Giovanni at the workshop of the powerful Florentine family the Medici’s.

From there his talent and reputation as an artist and sculptor grew immensely, resulting in Michelangelo becoming one of the most well-known and respected figures in the world of fine arts.

Michelangelo’s paintings and sculptures are instantly recognizable to millions around the world. He is also an artist that has been celebrated for many centuries for his contribution to the Renaissance in Italy and beyond.

Although the center piece of the Sistine Chapel ceiling – The Creation of Adam is more famous than the rest of the individual images when viewed in it’s entirety the full ceiling is far more impressive.

Michelangelo painted the Sistine Chapel ceiling (IVolta della Cappella Sistina) between 1508 and 1512. It is an outstanding example of High Renaissance art.

The ceiling is from the Sistine Chapel, a huge papal chapel inside the Vatican completed in 1480 by Pope Sixtus IV, for whom the chapel is called.

Pope Julius II commissioned the painting of the ceiling. Even now, the chapel is used for papal conclaves and other significant ceremonies.

The ceiling artwork is centered on nine events from the Book of Genesis, the most well-known of which being The Creation of Adam.

The intricate design contains many sets of individual individuals, both dressed and naked, allowing Michelangelo to completely show his ability in producing a vast range of postures for the human form and serving as an immensely important pattern book of models for other painters ever since.

To get the grandiose project done, Michelangelo painted from scaffolding that was built up underneath the ceiling allowing him to work on his back.

This magnificent Renaissance sculpture was produced between the years of 1501 and 1504. It is a 17-foot-tall marble statue of the Biblical hero David, shown as a standing male nude.

Originally commissioned by the Opera del Duomo for the Cathedral of Florence, it was intended to be one of a series of colossal sculptures to be placed in the niches of the cathedral’s tribunes, some 80 meters above the ground.

When the sculpture was approaching completion on January 25, 1504, Florentine officials had to accept that the more than six-ton figure would be too large to lift to the pinnacle of the cathedral.

A commission of 30 Florentine residents, including Leonardo da Vinci and Sandro Botticelli, was charged with selecting a suitable location for David. While nine alternative places for the statue were considered, the majority of members seem to have been evenly divided between two.

It was ultimately decided that it should be placed near the entrance to the Palazzo della Signoria, the city hall (now known as Palazzo Vecchio).

In June 1504, David was erected at the Palazzo Vecchio’s entryway.

To preserve it from deterioration, the statue of David was taken from the plaza in 1873 and exhibited in the Accademia Gallery in Florence, where it has drawn millions of visitors. In 1910, a replica was installed in Piazza della Signoria.

The Last Judgement is a huge fresco painted by Michelangelo that covers the whole alter wall of the Vatican City’s Sistine Chapel.

Because of its size, intricacy, and quantity of figures, it took Michelangelo four years to finish between 1536 and 1541.

He began working on it 25 years after the completion of the Sistine Chapel Ceiling and was 67 years old at the time it was finished.

Originally, all of the men were painted naked, but they were subsequently covered up with painted drapery.

Initially, the reaction was divided, with both acclaim and condemnation, with the nudity, as well as the muscularity of several of the figures, being significant talking points.

4. The Creation of Adam

Among the most renowned Renaissance masterpieces is Michelangelo Buonarroti’s The Creation of Adam, which was installed on the ceiling of the Sistine Chapel in Rome, Italy in 1512.

The picture, which depicts the moment God created the first man, Adam, according to the Biblical narrative of Genesis, is one of the most recognized works in human history..

The remainder of Michelangelo’s work on the chapel ceiling includes additional Biblical stories, but The Creation of Adam is the centerpiece of the whole masterwork.

The image has remained one of the most famous in history.

While Michelangelo is probably best known for his later works the statue of David and the Sistine Chapel works it is the Pieta sculpture that established him as an artist early on in hos career.

Michelangelo carved a number of smaller works in Florence during his time with the Medici, but in the 1490s, he left Florence and went to Venice, Bologna, and finally Rome, where he lived from 1496 until 1501.

Michelangelo was commissioned by a cardinal named Jean de Billheres to create a sculpture for a side chapel in Old St. Peter’s Basilica in Rome. The resulting work, the Pieta, would be so successful that it would catapult Michelangelo’s career in ways that no other work he had done had done before.

It is Michelangelo’s only signed work. It is also the only known Renaissance sculpture to have been authorized by the Chapter of St. Peter and put in St. Peter’s Basilica.

6. The Conversion of Saul

The Conversion of Saul is the first of two major paintings painted by Michelangelo in the Vatican’s Paul’s Chapel (Cappella Paolina). The other depicts Peter’s Crucifixion.

The chapel was constructed for Pope Paul III as a private chapel. The paintings were painted on opposing sides of the chapel’s lengthy walls.

This artwork portrays Saul’s conversion to Christianity while on the way to Damascus. The intensity and vividness of the colors employed are unusual for the period.

The sculpture depicts a figure of Bacchus, the Roman god of wine and intoxication holding a goblet and grapes in his hands with a faun, half man-half goat, standing behind him eating the grapes.

It was originally commissioned by Raffaele Riario, a high-ranking Cardinal and antique sculpture collector, but he turned it down, and it was eventually bought by Jacopo Galli, Riario’s banker and a friend of Michelangelo.

The Bacchus is one of only two surviving sculptures from the artist’s first period of residence in Rome, along with the Pietà.

In 1572, the Medici purchased the statue and moved it to Florence.

Agnolo Doni most likely commissioned the Doni Tondo to celebrate his marriage to Maddalena Strozzi, the daughter of a prominent Tuscan family.

The artwork is in the shape of a tondo, which means “round” in Italian, and was often linked with household themes throughout the Renaissance.

The Doni Tondo dates back to the time when Michelangelo came to Florence following his first visit to Rome, around the time when the renowned Renaissance artist created the famed David statue.

It is Michelangelo’s lone picture in Florence and is regarded as one of the masterpieces of late Renaissance Italian art.

Moses is a sculpture located in Rome’s cathedral of San Pietro in Vincoli. It portrays the biblical figure Moses with horns on his head and was commissioned by Pope Julius II for his burial tomb in 1505, finished in 1545.

When Michelangelo completed sculpting David, it was obvious that he had produced the most beautiful figure ever—perhaps even surpassing the splendor of Ancient Greek and Roman sculptures. When Pope Julius II heard about David, he invited Michelangelo to come to Rome and work for him.

Julius II died in 1513, and Michelangelo’s original design planned for nearly 40 sculptures. The Moses statue would have been set on a tier approximately 12 ft 3 in height, facing a St. Paul figure.

The figure of Moses is placed in the middle of the bottom deck in the final design as the scale of the project was reduced considerably following the Pope’s death.

10. The Madonna of Bruges

The Madonna of Bruges is a marble sculpture of the Virgin and Child by Michelangelo.

The piece is also noteworthy for being Michelangelo’s first sculpture to leave Italy during his lifetime. It was purchased by Giovanni and Alessandro Moscheroni, rich textile merchants in Bruges, once one of Europe’s major commercial centers.

Michelangelo’s Madonna and Child, created in Italy and transported to Belgium in 1504, is unlike any previous rendition. It portrays a mother who is saddened by what is to become of her son, rather than a loving and caring mother looking at her kid.

The chiaroscuro effect and movement of the draperies are comparable to Michelangelo’s Pietà, which was finished soon before Madonna and Child. Mary’s long, oval face is likewise evocative of the Pietà.

Michelangelo’s Madonna was stolen by troops during the French Revolution and World War II and concealed from view; it was subsequently discovered and returned to Belgium where it now resides at the Church of Our Lady in Bruges, Belgium.