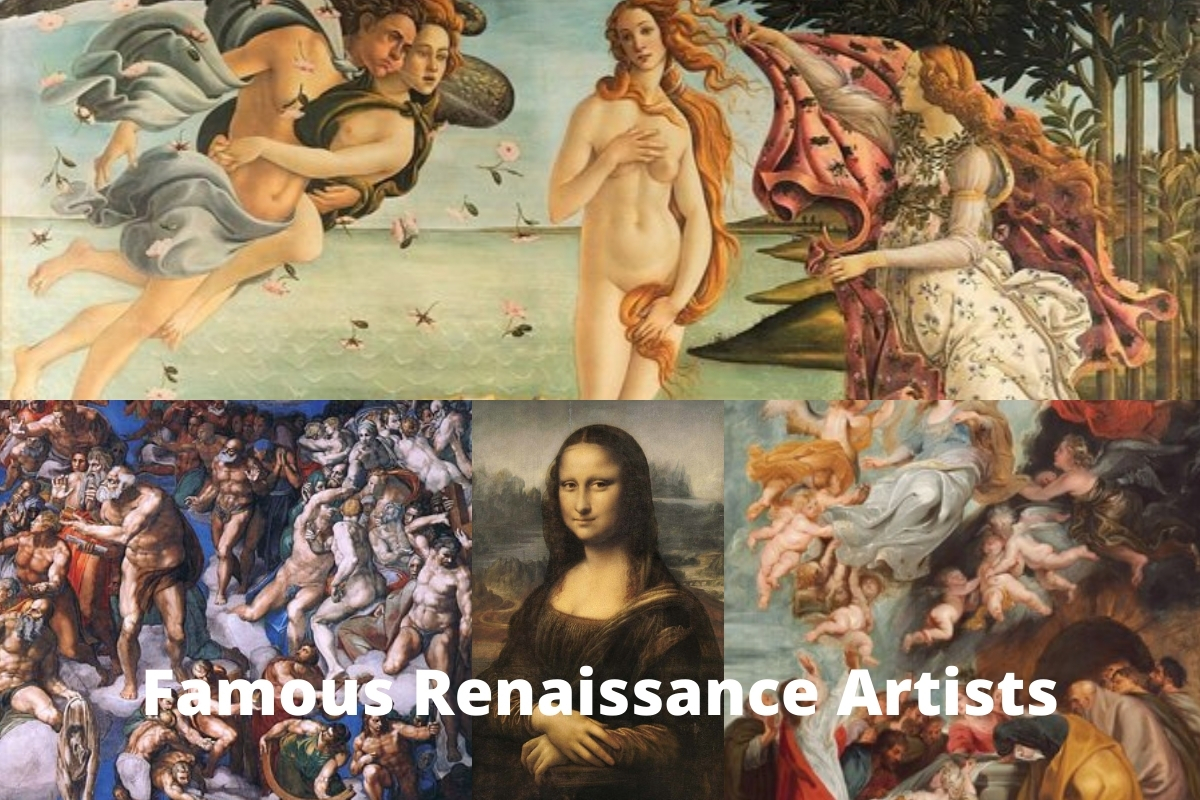 The most famous renaissance artists are responsible for some of the greatest works of art ever produced.

The renaissance spanned a 300 year period which revolutionized art, medicine and architecture.

The introduction of linear perspective and the rejection of symbolism to new forms of expression and humanism changed the art world forever.

Leonardo da Vinci was born out of wedlock in a farmhouse in 1452 Tuscany, Italy. With a short time in formal education, da Vinci displayed great artistic skill.

By the time he was twelve, he started an apprenticeship where he learned many different subjects from metalworking to sculpting.

Da Vinci’s unique talent was in depicting human expressions which gave him great notoriety from an early age. In 1478 he began receiving independent commissions but abandoned them after offering his services to the Duke of Milan where he painted many works such as The Last Supper.

After the Duke was overthrown, da Vinci fled to Venice and drew maps for the military, but eventually returned to Florence where he began working on Mona Lisa which would become the most famous artworks in the word.

He continued his artistic ventures into his later years where he turned to more scientific endeavors until his death in 1519.

While he is known to be an artistic genius in painting, architecture, and poetry, Michelangelo Buonarotti thought of himself as a sculptor, dabbling in other art forms but always maintaining sculpting as a constant throughout his life.

Much of Michelangelo’s artistic subjects focused on humans and religion. The Sistine Chapel, his Madonna sculptures, and David are all religious works that he commissioned.

Even as a child, he showed prodigious artistic talent during his apprenticeship with Domenico Ghirlandaio, and, at just fourteen, Ghirlandaio began paying Michelangelo as an artist.

After working for Lorenzo de’ Medici, ruler of Florence, in the Humanist Academy, he left Florence and completed Pieta. Shortly after returning to Florence, he completed David as well, solidifying himself as a prominent sculptor despite his age.

In 1508, Michelangelo was invited to paint the Sistine Chapel ceiling, another of his crowning achievements which took four years to complete.

Raphael Sanzio was a prolific painter and architect. Despite a mysterious and sudden death at the age of thirty-seven, he left behind a vast body of work, most likely due to the unusually large workshop that he operated where he supervised fifty pupils.

Most of this work was religious in subject and commissioned by the pope and catholic church.

The son of a painter, Raphael took over his father’s workshop after his death at the age of just eleven. After having great success with the workshop, Raphael pursued an apprenticeship with Pietro Vannunci for four years until he returned to Florence where he painted his famous series of Madonnas.

Eventually he moved to Rome where he was hired by the Pope as chief architect to build palaces for the church. Raphael continued to work until his death, leaving some of his works such as The Transfiguration unfinished.

Donato di Niccolo di Betto Bardi, or Donatello, was born in 1386 Florence, Italy. After receiving training from a goldsmith’s workshop, he began an apprenticeship with Lorenzo Ghiberti for metalwork and sculpture. Later, Ghiberti and Donatello were commissioned to create bronze doors for the Florence Cathedral.

In 1443 he was commissioned to create an equestrian monument in Padua, a task that had not been undertaken since ancient times. This led to further monuments in the following centuries throughout Europe.

He continued to sculpt until his death at seventy-nine years old in 1466, leaving behind an unfinished piece completed by one of his pupils.

Donatello was an innovative sculptor for his time. His most famous piece, David, was the first known free-standing statue since antiquity.

Using linear perspective in the Gothic style, he created lifelike and highly emotional sculptures that displayed accurate depictions of sorrow and suffering.

Albrecht Dürer was a renaissance painter, print-maker, and theorist born in Nuremberg within the Holy Roman Empire in 1471. While his father wanted him to become a goldsmith, Dürer’s aptitude for drawing convinced him to pursue the arts.

At the age of fifteen, he began an apprenticeship with Michael Wolgemut, whose workshop created woodcut illustrations. Over the years, Dürer improved the wood-prints to a level of artistic sophistication that earned him a reputation in his twenties and revolutionized what was conceived as possible with wood printing.

Much of the pieces Dürer completed were focused on religious subjects, although he also created many portraits. While he is mostly known for wood printing, he was also a respected watercolor landscape artist.

His artistic expression did not stop at visual mediums, however. He also wrote four books on the theory of human proportion that were published after he died in 1528.

Sandro Botticelli, born in 1445 Florence, was one of the most esteemed Italian painters of his time. Many of his pieces were focused on religious subjects, though some of his most famous paintings are on mythological scenes.

After apprenticing a goldsmith as a child, Botticelli began an apprenticeship with Fra Filippo where he learned to paint frescoes. As an adult, he began painting for churches, and, due to Filippo’s contacts, he had the patronage of Florence’s leading families.

Having earned a high reputation at the time, he was invited by the pope to paint frescoes on the walls of the Sistine Chapel which was the only time he worked outside Florence.

After the fall of Medici, one of Botticelli’s primary patrons, in his later years, Botticelli had a swift decline where he fell into isolation and mental anguish until his death in 1510.

Tiziano Vicelli, also known as Titian, was the founder of the Venetian school of renaissance painting. Born around 1488, Titian was sent with his brother to Venice at around ten years old to find and apprentice a painter. After a stint with another painter, he apprenticed the greatest painter of the time: Giovani Bellini.

With his master, Titian was commissioned early on by the state to paint frescoes, beginning his professional painting career.

After Bellini’s death, he was considered the master of Venetian painting for sixty years. He continued to paint until he died from the bubonic plague in 1576.

The subject of Titian’s paintings changed throughout his life, from religious and mythological scenes to portraits towards the end of his life. Though the subjects varied, he always maintained a unique use of vibrant colors in his paintings as exemplified in Danae, a painting in his “poesie” series.

Michelangelo Merisi da Caravaggio was a talented and troubled renaissance painter. Born in 1571 Milan, he began an apprenticeship with Simone Peterzano at thirteen years old. Shortly after his apprenticeship, he fled to Rome to avoid the aftermath of a fight with an officer.

There, he gained notoriety for his unique style of painting. Caravaggio was known for his realism and use of light and dark contrast, a technique that would influence baroque painting. Not wanting to hide the flaws of the individual, his paintings were sometimes criticized as vulgar.

After killing a man, Caravaggio fled to Naples in 1606 where, due to his combative nature, he again had to flee to Malta, Sicily, and then back to Naples.

At all of the places he went, he was commissioned and always received great praise. Eventually he died of sepsis in 1610 from a wound he received while fighting.

Jacopo Robusti, known as Tintoretto, was born in 1518 Venice to the son of a dyer, from which he derived his name. His only apprenticeship was with Titian which only lasted a few days before he was kicked out due to unknown reasons.

From then on, he studied on his own using Michelangelo’s drawing and Titian’s color as inspiration. Eventually Tintoretto rose to prominence in the 1540’s and was often commissioned by the church to do religious scenes for much of his work.

After Titian’s death, he became one of the most famous painters in Venice until his own death in 1594 due to a sudden illness.

Tintoretto employed narrative drama and a staunch use of perspective in his paintings. His most notable work, Paradise, stood seventy-four by thirty feet wide and was the largest canvas painting to ever be completed.

Paolo Veronese, also known as Paolo Caliari, was born in 1528 Verona from which he took his name. He studied under two masters, apprenticing Antonio Badile in 1541 and Giovanni Caroto in 1544.

He rose in prominence after working on frescoes for the Villa Soranzo and then moved to Venice in 1553 after being commissioned by the state.

During his life, he ran a large workshop that was primarily comprised of family members and was carried on by them after his death in 1588.

Veronese often completed large religious and mythological history paintings for his patrons and was particularly fond of feast scenes. His work is characterized by dramatic and colorful styling despite being trained in mannerism.

His work has earned him, according to modern critics, a spot alongside Titian and Tintoretto as one of the trio that dominated Venetian painting in the Cinquecento.