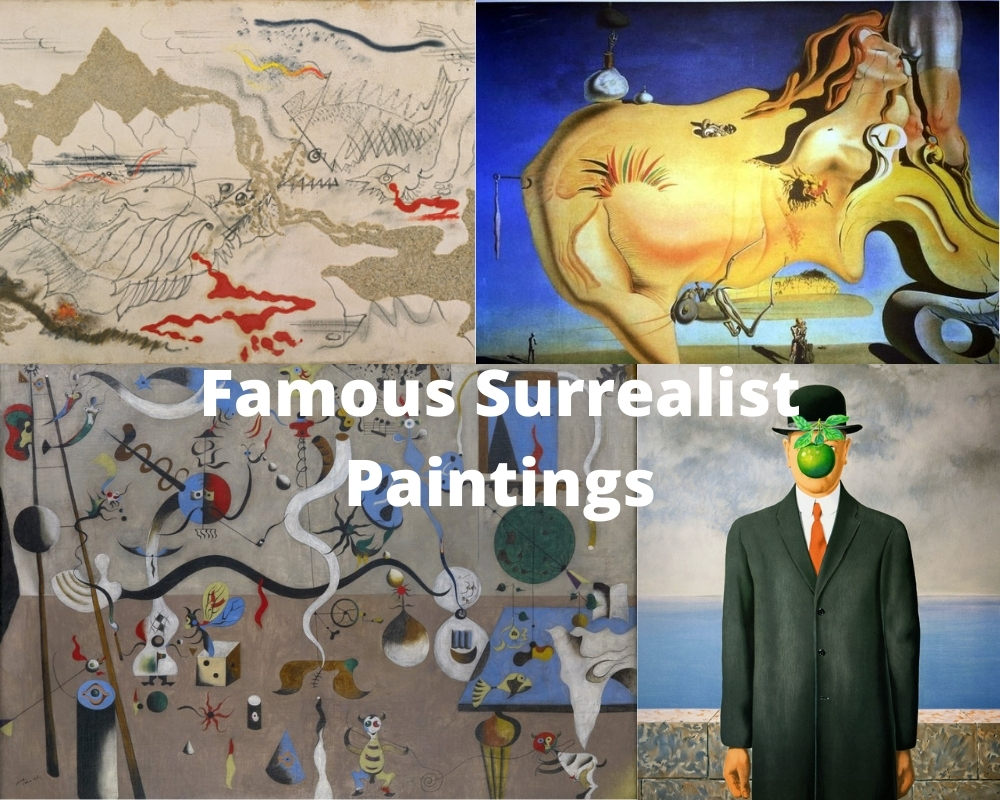 One of the most bizarre and intriguing artistic styles began to take shape in the early 1920’s as the world saw a rapid increase in the overall speed of everyday life.

Surrealism began as an exploration into the unknown for many artists who wanted to delve into the deeper imagery and meanings of dreams and other subconscious imaginations.

With surrealism there is often a fine line walked between genius and madness.

It is an art style that was a drastic shift from the classic approach to painting objects and creatures as they appear.

Artists began bending the confines of human imagination, pushing the viewer to confront their own psychological interpretations of the many various scenes and depictions from such famous painters such as Jean Miro, Salvador Dali, and many others.

A closer look into the 10 most famous surrealist paintings in history reveals a much deeper meaning than simple misshapen appearances.

1. The Persistence of Memory – Salvador Dali

The Persistence of Memory is easily the most famous surrealist painting ever produced, as an image it has been reproduced millions of times on prints, posters, and t-shirts.

Painted by the one of the most controversial surrealist artists of all, Salvador Dali in 1931, it was anonymously donated to the Museum of Modern Art in New York where it has remained in their collection ever since.

The center “figure” has no exact form or composition and yet it appears to be face which looks like a vague profile of Dali’s own face draped in a melting watch.

The watches although made from hard metal are presented in a soft malleable form which epitomized Dalí’s theory of “softness” and “hardness” and were said to represent the surrealist perception of a “Camembert melting in the sun”.

In the lower left corer of the painting there is an orange pocket watch that is covered in ants. Dali would use ants to symbolize decay many times in his work.

It was painted at a time when Dali was experimenting heavily with self-induced hallucinations as a means to explore ‘subconscious art’ or as the artist referred to it as his ‘paranoiac-critical method’.

The general public has often struggled with the meaning of the image as too did did Dali himself to a certain extent.

2. The Treachery of Images – Rene Magritte

Painted by Rene Magritte in 1929 The Treachery of Images or “Ceci n’est pas une pipe“, French for “This is not a pipe”.

Magritte painted several word-images in a series throughout the 1920’s all of which play on the notion that words are not things.

It is somewhat paradoxical as the painting is not of a pipe but of the image of a pipe.

Magritte made reference to it, with the following quote:

“It’s quite simple. Who would dare pretend that the REPRESENTATION of a pipe IS a pipe? Who could possibly smoke the pipe in my painting? No one. Therefore it IS NOT A PIPE.”

It currently resides in the Los Angeles County Museum of Art.

One of the most iconic surrealist paintings ever created is René Magritte’s work titled The Son of Man. Magritte painted the work in 1946 as a self-portrait that features a relatively simple depiction of a man wearing a suit and bowler hat with an oddly placed green apple in front of his face.

The man is shown standing in front of a wall overlooking the sea in the background. His eyes are just barely visible over the edge of the apple and slightly reveals a morose expression. Magritte commented on the work, noting that the main theme is that human nature is to desire to see that which is hidden:

It has become arguably the one of the best known surrealist artworks in history as it prods the viewer to focus on the man’s hidden face.

Many art critics and enthusiasts have noted that the apple is perhaps meant to arouse frustration on behalf of the viewer, which forces them to be content with the portrait as it is shown, as there is no other option to see the man’s real face.

Salvador Dali is a name that’s synonymous with the surrealist movement. His work has proven to be a compilation of timeless masterpieces in the realm of surreal art. Dali’s painting titled Swans Reflecting Elephants is another work that many art critics equate with the peak of surrealism.

Painted in 1937, the work depicts a scene in which a barren canyon lines either side of a still pool of water. The viewer most likely focuses first upon the beautiful swans that are calmly situated in the center of the painting.

However, a closer look reveals one of Dali’s favorite characteristics in his works—a double image that, when flipped upside down, makes the swans appear as lumbering elephants, which appear to be standing on the water’s edge.

Dali described this work as one which incorporated his “paranoia-critical method.” He described this style of art as “spontaneous method of irrational understanding based upon the interpretative critical association of delirious phenomena.”

Joan Miró was a masterful painter who managed to create one of the most famous surrealist paintings of all time on his first venture into the genre.

His work titled Harlequin’s Carnival is a lively, playful painting that Miró himself described as being based upon a brilliant dream image.

The painting was created in 1924 and depicts a scene of inanimate objects engaging in what appears to be a fun-filled carnival. Many of the objects appear to be in motion, perhaps dancing or marching while strange beings seem to be involved in the foray.

Many art enthusiasts and critics might describe the work as being overly animated, but that was the driving force behind what made this painting so popular.

Historians record that Miró’s work was to be featured in an art exhibition in Paris, France in which many surrealists at the time would be in attendance.

Miró assumed that his work would not draw much attention from the likes of Dali, Masson, and Redon.

To his surprise, the painting turned out to be a resounding success as many of the artists and critics in attendance gushed over the playful, comical work of genius.

Going through the greatest surrealist paintings of all time is not quite complete without mentioning Miró’s other work known as The Tilled Field.

The painting is widely considered to be Miró’s greatest work and it closely resembles the overall manner in which the artist was known for depicting his surrealist visions.

Some art critics have noted that this painting closely resembles another work from Miró titled The Farm, which was done in a more realistic style. The Tilled Field was painted in 1924 and was created as a surrealist view of his family’s Catalan farm, located at Mont-roig del Camp in Catalonia.

The painting features a scene that is full of life, despite being depicted with rather dull colors. Miró’s sky appears to be a mustard-yellow hue while the earth below is shown in pale brown tones that indicate the sandy soils of the Catalan landscape.

Many critics praised this work for Miró’s free-spirited portrayal of a place with such personal significance.

Yves Tanguy commented on his work titled Mama, Papa is Wounded, telling art critics that this particular painting was very closely driven by Freudean psychoanalysis and language of symbols. Tanguy painted this masterful piece of surrealist art in 1927 and noted that this work was a result of an extensive series of research related to war veterans.

The painting depicts a bleak landscape that includes a barren desert which contains only a few scattered objects such as a cactus, beans, and a strange stick that is standing on the right side of the canvas.

Many critics have commented that this work likely portrays the stark emptiness that many soldiers are left with after witnessing the horrors of war.

Salvador Dali is widely known as one of the greatest surrealist painters and his work titled The Great Masturbator is almost unequaled in the genre.

Painted in 1929, Dali noted that this particular work is meant to represent, in part, himself at the young age of 25. Like Tanguy, Dali was heavily intrigued by the work of Sigmund Freud, specifically the realm of subconscious sexual desires.

The painting’s central figure is modeled after the famous rock at Cullero, which is located at Cape Creus in Spain. The large figure is said to be a representation of Dali’s inner fears, as well as his persistent obsessions.

He would comment that the inclusion of a grasshopper pointed to his paralyzing fear of the insects. This painting is one of the most recognized works in the field of surrealism and is another work that’s based on the artist’s “paranoia-critical interpretations.”

Among the surrealists, Max Ernst had perhaps one of the most unique personal styles within the genre. Ernst painted what many consider to be his most famous work in 1937.

He was one of the founding members of the surrealist movement and is heralded for his dedication to the artistic style that would transform the world of art forever.

The painting features two prominent figures as they are walking toward a specific destination. The darker figure to the left has many characteristics that would differentiate the being as a female entity, compared to the more shapely, masculine figure on the right.

Both figures appear to be made up of some type of ancient rock which contains fossils and other seemingly dead organisms.

The work has been described as one that demands that the viewer understand the malevolent creatures, despite their wretched appearance. Ernst’s work was also heavily influenced by Freudian psychology, which largely centered around the studies of ego.

In the early stages of the surrealist movement, many artists had styles that widely varied from one another. No surrealist had a more unique method of creating his works than Andre Masson.

His painting titled Battle of Fishes was one that might be looked at as slightly crude when compared to the works of Dali and others who focus on sharp, often realistic depictions of objects and landscapes.

The work is said to depict underwater fish which are engaged in a never-ending cycle of attacking and eating one another. This is a clear reference to the terrors of World War I, which had just ended shortly before Masson painted his masterpiece.

Masson applied gesso to some areas of the canvas and scattered sand on it to create a unique oceanic scene. He also included paint that was not applied with a brush, but rather poured straight from a tube.

The aggressive nature of the fish and other aspects of the painting are perhaps a reflection of the broken mental state of Masson, who witnessed the worst parts of the war himself.