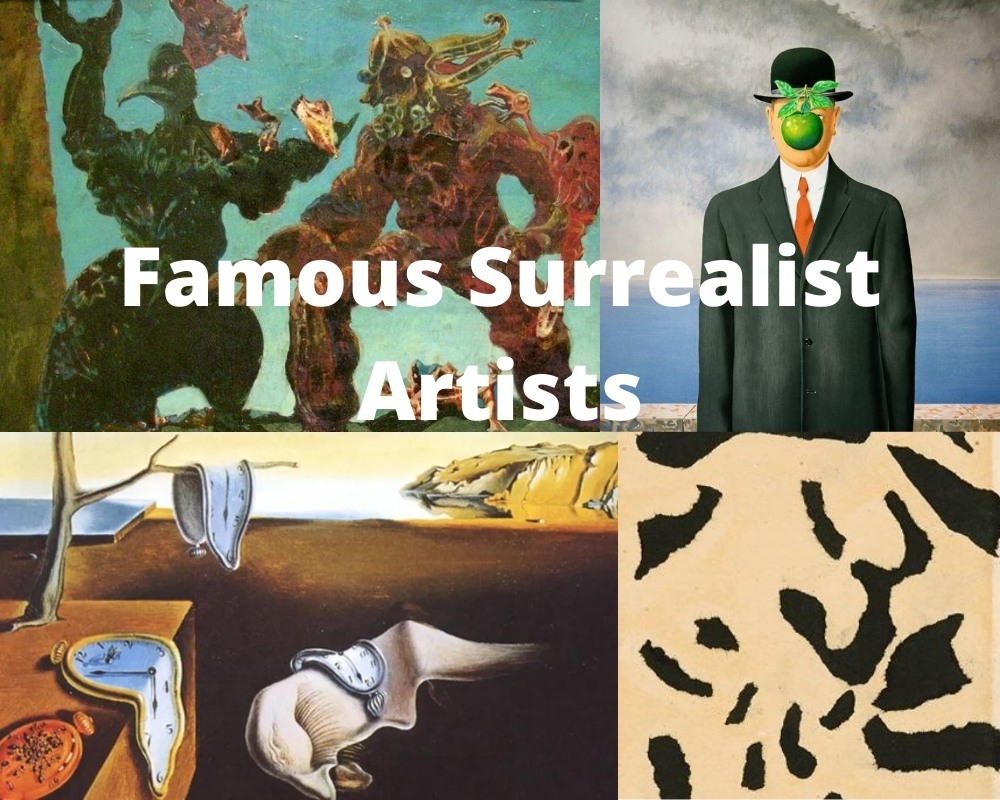 Surrealism is more than a genre, but an artistic movement that inspired a world.

Many surrealist paintings can be defined as themes of imagery, bright color skims and other bold artistic techniques.

The top surrealist artists felt they had an open invitation to explore the subconscious mind of humans.

Thus, the end result depicts a person’s deepest thoughts that is transformed into a strange image on a piece of canvas.

Salvador Dali is a Spanish surrealist painter who was famous for exploring the human subconscious in all of his art.

Dali was an art student in Madrid during the 1920s when he discovered surrealism.

Dali’s discovery came after reading the writings of Austrian neurologist Sigmund Freud, who helped him explore the mind’s subconscious. Plus, it was aided by Dali befriending Pablo Picasso and Rene Magritte shortly thereafter.

He began to paint images that represented a hallucinate state of mind which Dali called “paramaniac critical.” He traveled to Paris, France to join the surrealist movement and produced some of his best work as an artist.

Each finished painting depicted a dream world where common objects were slowly melting away right before our eyes. Often, the landscape was of Dali’s home country of Spain was in the background.

In 1934, Dali was expelled from the surrealist movement after refusing to take a hard stand against Spain’s leader Francisco Franco.

Never the less his works continually rank high as some of the all time great Spanish paintings ever produced.

Rene Magritte was a Belgian artist who created witty, thought-provoking artwork all throughout his career.

Often, observers of his paintings questioned their own reality in the world around them. The one constant in all of his art was a cloth covering the image’s face. It represented his mother who was suicidal and died in a self-inflicting drowning incident near their home.

Magritte was 13-years old at the time and witnessed the local authorities pulling her body from the lake. He noticed that his mother’s face was covered with her dress.

Magritte’s art career began with drawing lessons before moving to Royal Academy of Fine Arts in Brussels. However, he found the schoolwork to be uninspiring and left to pursue an artistic career.

After a stint in the Belgian army, Magritte began painting. His surrealist approach grew popular quickly and inspired two 1960 art icons, Andy Warhol and Jasper Johns, in their own work.

The magic of Magritte’s paintings was the perception of the image within the work. Often, they were placed in extreme, unrealistic conditions by the artist.

Jean Arp, a French artist and painter, was one of the leaders of the surrealist movement in the first half of the 20th Century.

His training began at the turn of the century in his native country. While living in Switzerland, Arp co-founded DeModerne Bund (The Modern Alliance) with a group of artists who pledged to move the surrealist movement forward with their art.

He returned to France in 1914, where Arp became a close friend of Pablo Picasso as they’re shared similar artistic beliefs.

Shortly after the start of World War I, Arp became a founding member of the Dada movement in France. This helped with his advancement as a painter.

His first major work as a surrealist painter was “Papiers Dechines” (torn papers), which took to the belief of leaving creation to chance.

Art historians believe Arp’s paintings had more of an edgier look than other artists.

He continued to experiment with abstract images that depict the human mind and spirit until his death in 1966.

Max Ernst was a German artist and sculptor who heavily influenced the surrealism movement in a multiple of ways. His father was an amateur painter in his own right and inspired Ernst to take an interest in the arts as well.

He enrolled in the University of Bonn as an art history major, but Ernst was more fascinated by the paintings created by mentally-ill patients he was working with in a student program.

This inspired him to pick up a brush and begin painting himself.

Ernst’s first works were of landscape and human portraits before becoming a full-time artist at the urging of his close friend August Macke.

In 1914, Ernst met Jean Arp and the two began a life-long friendship. Many observers felt Ernst’s finished paintings were heavily influenced by his time spent in the military.

Most of his pieces consisted of cutout photographs that were arranged to suggest the main subject had multiple identities. Surrealism allowed Ernst to add two new techniques, frottage (rubbing a pencil against wood or fabric) and decalcomania (transferring paint from one surface to another) to his repertoire.

This allowed him to free images from his subconscious onto the canvas. In the 1930s, Ernst’s artistic interests went from painting to sculpting, but many of his contemporaries felt he became less experimental in his work.

Yves Tanguy was a French-American artist who had a great influence on the next generation of painters in this genre.

Unlike his contemporaries, Tanguy represented the dreamscape imagery found in most surrealist artwork with the use of naturalism and realism.

Often, it came in themes of surreal landscapes that achieved a sense of believability by his audience. Among some of Tanguy’s works include “Mama” and “Papa is Wounded.”

When asked to described his approach to art, Tanguy felt the images in his paintings came together on the canvas right before his eyes with little thought required.

Usually, the image came to him as he progressed through the process. A finished piece of art gave Tanguy some sense of liberty and freedom because he didn’t follow a tired, old path to capture an image in a painting.

In 1937, Tanguy decided to move his family to Woodbury, Connecticut and his artwork become more colorful.

The images loomed larger in his paintings following the move to the United States.

Andre Masson is a French painter and sculptor who spent the majority of his childhood in Brussels.

Masson served in the French Army from 1914-19 and was severely injured in a battle during World War I.

He returned to Paris following his recovery and met several surrealists who encouraged him to become a painter.

In 1923, Masson had his first solo exhibition as most of the paintings were of forest, still life and card players portraits.

But as he got more involved the surrealist movement, Masson explored his expression of the forces of nature through his paintings. In Masson’s later years as an artist, he painted strictly abstract art.

Paul Delvaux was a Belgian artist who merged surrealism with other genres of art through his oil paintings. The majority of his works were heavily influenced by fellow surrealists Giorgio de Chirico and Rene Magritte.

One of the recurring themes in his paintings were nude women caught in various situations such as inside a building, standing on an outdoor patio or waiting at a train station. Delvaux felt this image expressed the subconscious mind in most males.

As he moved forward in his career, Delvaux became interested in exploring the area of painting that was the visual equivalent to surrealist poetry, which was gaining a large following inside the movement.

He began to merge the two subject matters together even if they were unrelated to one another.

Ironically, Delvaux never considered himself one of the surrealists despite having so many personal connections within the movement.

Meret Elisabeth Oppenheim was a Swiss painter and sculptor of German descent. Oppenheim studied art at the Basle at the Kunstgewerbeschule from 1929-30.

She produced her first series of surrealist art that was shown to the general public immediately. It showcased ink and pen drawings on paper from her own school notebook.

Oppenheim’s artistic style greatly changed after meeting and becoming friendly with Alberto Giacometti and Jean Arp. Quickly, her art was proclaimed as the next voice of the movement.

Oppenheim’s paintings dealt with the inner-workings of the human mind while dreaming. She painted female images in a way that all men desired.

Oppenheim’s involvement with the surrealist movement was curbed at the conclusion of the second world war.

Leonora Carrington was an English artist and writer who is famous for being the companion of artist Max Ernst and together, they led the movement in the late 1930s and early 1940s.

Carrington was educated at the Chelsea School of Art. Her first exhibit was in 1936 as most of the finished paintings were heavily influenced by Carrington’s mentor Amedee Ozenfant.

The following year, Carrington met Ernst and they immediately became a romantic couple. The relationship ended shortly after the conclusion of World War II and Carrington sought refuge in Mexico.

She brought surrealism to Latin America as her art showcased more color and beautiful landscapes. Carrington would live in Mexico until her death in 2011.

Those images became known as “rayographs.” It was a humorous attempt by Ray to name a new type of surrealist art which combined his name with the word “photograph.”

Ray’s artistic beginnings began shortly after World War I. The majority of the themes in his paintings depicted a society deeply traumatized by the destruction of war. In 1922, Ray debuted “rayographs” to the world.

Often, the images were everyday objects, obscure materials and body parts of human models placed onto a photosensitive canvas paper. Ray exposed the images to light, which created a negative photo.

Over time, he expanded his technique to moving images. All of his creative innovations brought Ray to the center of the surrealist movement.