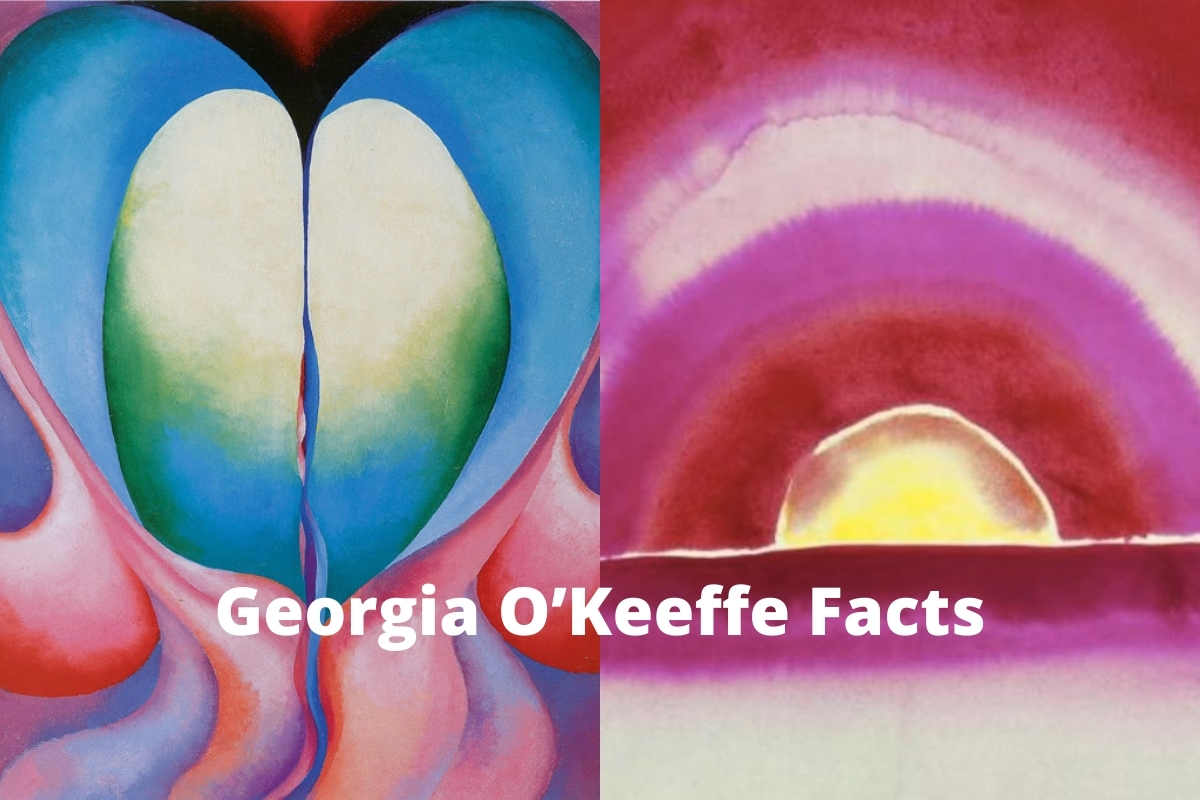 Georgia O’Keeffe, born Georgia Totto O’Keeffe, was an American artist. She was best known for her paintings of close-up views of flowers, although she also painted New Mexico landscapes and New York skyscrapers. Georgia O’Keeffe has been acknowledged as the mother of American modernism.

Her work is considered some of the greatest America paintings of the last century and both her art and her life remains highly controversial to this day.

O’Keeffe started her formal art training at the School of the Art Institute in Chicago in 1905, and she received further education at the Art Students League of New York.

However, she felt like she was somewhat limited by the constraints of her education. She worked as a commercial illustrator and did some teaching.

Between 1911 and 1918, she did some studies that introduced her to the principles of Arthur Wesley Dow. He created artwork based on personal style and personal interpretation, rather than simply replicating what he saw.

O’Keeffe experienced a major shift in the way that she approached artwork, and this transformed her art in the future.

Georgia O’Keeffe married Alfred Stieglitz, who was a photographer and art dealer, in 1924. In 1929, O’Keeffe started spending part of her years in the southwest, which inspired new series of paintings, including those of New Mexico landscapes.

The following are some interesting facts about Georgia O’Keeffe:

1. She enjoyed drawing nature paintings from a Model A Ford’s backseat

When she was exploring nature, she would often like to paint in the backseat of her car. This would allow her to stay out of the sun, which was very helpful in allowing her to paint comfortably in the hot New Mexico desert.

In order to capture the most vivid colors of her surroundings, she had to endure some extremely hot weather.

When she was not in the backseat of her car, she would often go camping and hiking in order to maintain proximity to the landscapes that were inspiring her work.

2. She painted more than 200 paintings of flowers

This is what she is best known for. They include Jimson Weed and Oriental Poppies, which are two of her most well known paintings.

However, considering that she painted more than 2,000 paintings in total, the fact that the flowers only made up 200 may be quite startling to many.

The majority of her other work portrayed cityscapes and landscape paintings, such as Black Mesa Landscape.

3. She stopped painting three times in her life

Georgia O’Keeffe was a very talented artist, but she also had many different problems and setbacks. She had debilitatingly bad eyesight, many nervous breakdowns, and quite a few financial issues. However, despite everything that she went through in her life, she never stopped being passionate about painting.

Because of her desire to continue to create, she never gave up on what she loved to do. Even though she had failing eyesight in the years leading up to her death, she did not leave the world of art. She could no longer paint successfully, but she did enlist the help of a friend to move to a new medium.

O’Keeffe started experimenting with sculpture and created many sculptures before she died at the age of 98. Some of these were flower bowls.

4. Her friend is responsible for helping her gain traction

Early in her career, Georgia O’Keeffe sent some charcoal drawings to a friend in New York. The friend, without her permission, took the drawings to photographer Alfred Stieglitz. Stieglitz became very interested in O’Keeffe’s work, as well as O’Keeffe herself.

Also without her permission, he ended up displaying her work in a Gallery 291 exhibition. All of the major figures of the modern art scene at the time were there, including Cezanne and Matisse.

5. She decided to exclusively be an artist in 1918

She achieved success from very early on, including good reviews from her art community. She spent the winters in New York, but she spent the summers at Lake George.

This is the period in O’Keeffe’s life about which very little is known. It is quite well known that Georgia O’Keeffe would complain about how green it was at Lake George.

Many people have believed that this was not an important time in her career, just because there is so little known about it. However, she did go there every summer for a decade.

She actually built a studio at Lake George, calling it “Shandy,” and she had a lot of exposure to nature here. It was at Lake George that Georgia O’Keeffe first planted petunias, and they were actually the first flowers that she ended up painting.

6. Her most famous painting is Jimson Weed/White Flower No. 1.

This painting actually was hanging in the White House during President George Bush’s time in office. It was actually the most expensive painting that was ever sold at auction that have been created by a female artist.

7. She was quite particular about the way in which her paintings were framed

The backs of her paintings have inscriptions that describe the frame profiles in quite a bit of detail. For example, for Eggplant painting has a description on the back that mentions no visible seams and black lacquer.

However, it is rumored that Laura Bush altered the original frame of Jimson Weed/White Flower No. 1 was altered in order to have a hint of gold for a specific event that was taking place in the White House.

8. She and her husband, Alfred Stieglitz, wrote about 25,000 pages of love letters to one another throughout the course of their relationship.

They started writing to each other when they first met, when he was married and famous, and she was 23 years younger than him and virtually unknown. Sometimes, they would write to each other up to two or three times a day and as many as 40 pages at once. These writings document the progression of their relationship, from initial interactions to their marriage. Some of these letters even speak of their marital issues.

9. She never signed her paintings

Georgia O’Keeffe expected people to recognize her paintings, which they often did because of their distinctive subject matter and styles.

10. She would continue to work outside even in inclement weather

When it got too cold, she would paint with gloves on her hands. She would also create makeshift tents using tarps in order to deal with heavy rain.

O’Keeffe continue to go camping into her 70s, and she had a well-documented rafting trip at age 74 with Todd Webb, who was the photographer. In fact, some of her camping equipment is on display at the Georgia O’Keeffe Museum.

Georgia O’Keeffe was a true revolutionary in the world of art. She paved trails for female artists all over the world that continue to help women in art today.

It is believed that she once said, “I’ve been absolutely terrified every moment of my life and I’ve never let it keep me from doing a single thing I wanted to do.” This certainly says a lot about how she lived her life and progressed through her career, and it is the legacy for which she will be remembered.