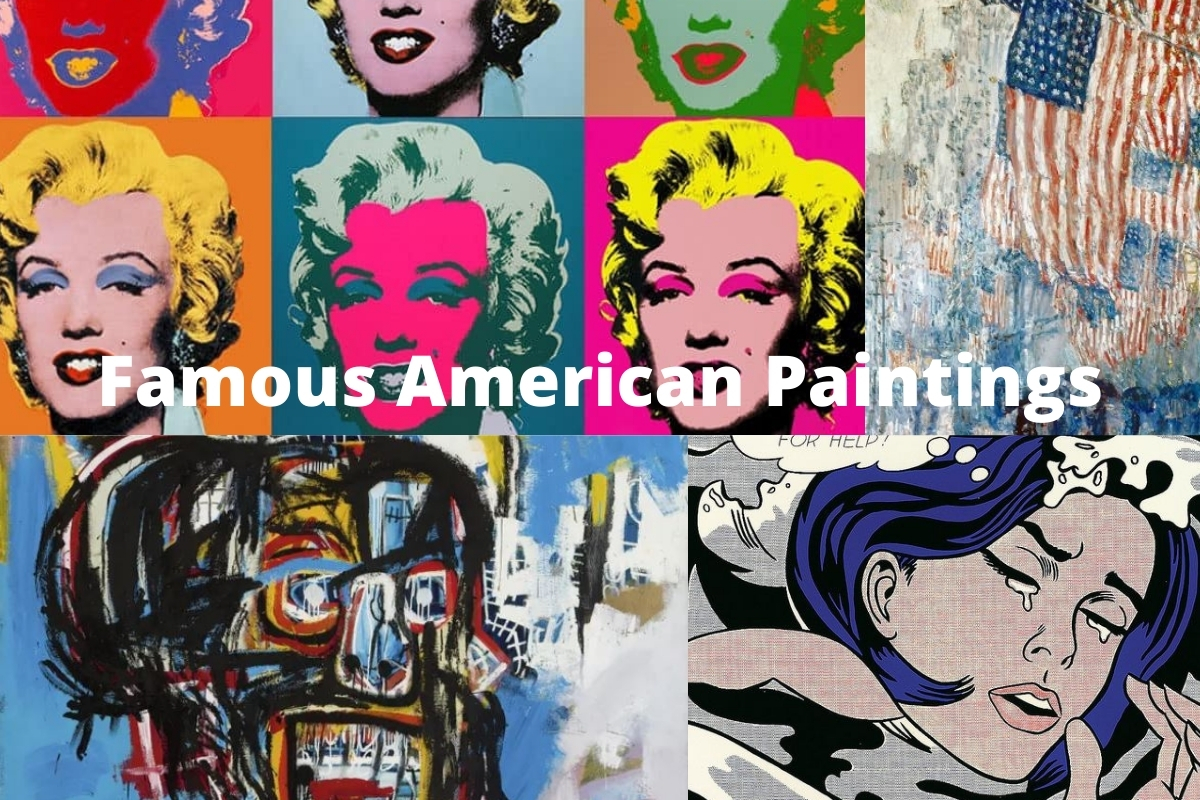 American artwork was born with the pioneer spirit that drove much of the culture for many years into the 20th century. The country’s paintings are defined by the many different things that make American life so unique to the rest of the world including its breathtaking landscapes and rugged ingenuity.

The earliest American paintings captured the country side long in it’s most natural unspoiled state which has now been mostly lost.

Many of the most famous American artists were shaped by the country’s struggles from a very early age and sought to portray the various hardships that are unique to a new country. The nation’s artwork is made up of an interesting mixture of many different cultures and peoples that make up the whole of America.

There are various influences that can be traced back to other cultures and parts of the world in various regions of the United States such as the French leanings of artwork from places like Louisiana or styles like those of the American southwest that integrate Spanish and South American inspirations.

A closer look at the 10 most famous American paintings reveals how much of the country’s painters developed their own distinct styles of expression that seem to be forever tied to the explorative nature of America.

Perhaps one of the most iconic pieces of American pop art is Andy Warhol’s Marilyn Diptych. The painting is a tribute to American actress Marilyn Monroe and was created shortly after her death in 1962.

Warhol was widely known for producing paintings that viewed different pieces of everyday American life in a manner that overlooked the mundane in favor of the beauty that could be found in each one.

The actress was a household name in the early 1960’s and Warhol’s work captured Monroe’s image in a wide range of contrast and color differences. The image was originally featured on one of Monroe’s most popular films, Niagara, that was released in 1953.

Warhol painted the actress in a way that was reminiscent of Christian diptych paintings that were featured on two framed panels, possibly as a way of noting that many in American culture viewed Monroe with a sort of reverence, especially after her death.

One of the most memorable paintings in American culture that is virtually a snapshot of the famous 1940’s lifestyle is Edward Hopper’s Nighthawks.

The work is an oil painting that features a late night scene in which a few patrons are still lingering around a corner cafe in the midnight hours. Hopper’s painting offers a masterful display of light and dark on more than one level.

The vivid colors work to contrast against the light that could be seen as overly bright in such a setting, but the darkness works with the stark brightness in a way that establishes the scene as one that can be viewed in a number of ways.

The couple featured in the painting appear to be engaged in a prolonged silence while the waiter in the cafe looks up briefly as he carries out his duties. One other man sits in a similarly quiet fashion, his back turned to the viewer.

The painting curiously doesn’t feature a door to the cafe, which gives the impression that the interior of the cafe is as lonely as the dark, desolate street outside.

Many critics claim this painting is indicative of the way industrialized life has begun to drive people apart from one another, even in sprawling cities during this period.

Jean-Michel Basquiat’s “Untitled” (1982) is famous for being one of the most expensive paintings ever as it was purchased by a Japanese billionaire for $110.5 million in 2017.

Basquiat’s painting is a strange, yet lively image of a skull embossed with a variety of colors set against a blue background.

The painting captures bits of life in big city America during the 1980’s as some portions appear more like the graffiti that donned the artist’s Brooklyn neighborhood during his young adult years.

Basquiat was himself a street artist and his art style closely represents that lively, but unpredictable nature of life in American cities during this time. His painting is widely considered to be one of the most memorable images in the American art scene.

Part of what makes American art so distinctly unique from other cultures is the heavy portrayal of landscapes, which are rooted in the nation’s character as much of the country was wild and unsettled until somewhat recently by European standards.

Andrew Wyeth’s 1948 work titled Christina’s World displays a portrait of a stark prairie scene in which a young girl is longingly gazing toward a solitary house on the hill above her.

This painting was inspired by Wyeth’s neighbor who was diagnosed with a condition—likely polio—at a young age, which left her unable to walk.

The girl refused to use a wheelchair and instead dragged herself around using her arms, which is likely what Wyeth intends to portray here.

The painting has much more of an impact on one’s mind as it seems to imply that the girl is part of a bleak, inescapable world.

Few American paintings are more recognizable than Grant Wood’s work titled American Gothic. Widely known for its stark portrait of an expressionless couple, a father and daughter, and their farm, the scene has been copied into American film and incorporated into the cover of music albums.

Created in 1930, this painting features a high level of detail in every aspect from the faces and attire of the man and woman in the foreground to the building and it’s architectural design in the background.

Many art enthusiasts and critics point to this Social Realism painting’s ability to portray the American spirit in the early half of the 20th century when the hard life of farming was a lifeline for many in the United States.

One of the most recognizable paintings in American history portrays a scene that might initially appear to be lacking in both color and life, but a closer look reveals a brief glimpse into a moment of mourning for the artist’s mother. James McNeill Whistler painted this work, titled Whistler’s Mother, in 1871 and managed to capture what seems like a range of emotions in one single pose.

The painting is done on a nearly gigantic canvass and there are great levels of detail in every area of the work, down to the smallest fold of clothing. Whistler somehow managed to show the beauty that was still evident, even in a scene of an elderly woman in mourning, in such a dark painting.

7. The Veteran in a Field – Winslow Homer

Few events left as much of a lasting impression on the whole of American culture as the Civil War. Winslow Homer was an painter that created a piece of work which gained instant fame for its image of life after the war, shown in a simple, yet picturesque wheat field.

Painted in 1865 just after Lee’s surrender at Appomattox, Homer shows a weary soldier who has turned his focus away from fighting and back to farming.

The country was, at this time, still deeply divided, but was undoubtedly ready to let go of one of the most trying times in its history.

The farmer is seen working in a field during the midday sun as there are few shadows to be seen. The idea that the country has cast off the will to fight is indicated by the farmer’s coat as it lays in the foreground with his army-issued canteen.

The fact that the farmer is using a scythe harkens back to a country faced with many deaths.

The name Norman Rockwell is often synonymous with American art. Known for his ability to portray the scenes of American life in the best possible light, Freedom From Want was perhaps Rockwell’s most famous work.

Painted in 1943, this was a snapshot of the patently American holiday of Thanksgiving.

At a time when the United States was gripped in the throes of World War II, Rockwell was undoubtedly intending to show the very best of life back in the states.

The scene is one that is starkly contrasted to the horrors of war and has long been recognized as one of the most uniquely American pieces of artwork ever created.

Georgia O’Keeffe is one of the most famous female artists whose work signifies womanhood in both a metaphorical sense, as well as a representative nature.

Black Iris is an oil painting that was done in 1926 and captures the intricate detail of an up-close view of a flower. Many art enthusiasts and critics have noted that the painting closely resembles the female anatomy, but the botanical beauty of the subject is one that demands attention.

O’Keeffe was known as having an affinity for flowers, her favorite being the black iris, which only bloomed for a short period of time each year.

She has repudiated assumptions that the paintings are in some way suggestive of female sexuality and insists that the beauty of something as simple as a flower often goes overlooked.

10. View from Mount Holyoke, Northampton, Massachusetts, after a Thunderstorm — The Oxbow – Thomas Cole

One of the most famous landscape paintings portrays an area of the country that has long been known as The Oxbow. Thomas Cole painted the work entitled View from Mount Holyoke, Northampton, Massachusetts, after a Thunderstorm — The Oxbow in 1836.

Cole was one of the finest landscape artists of his generation and attained considerable success during his lifetime.

The scene is one that not only captures the awe-inspiring view from the height above the Connecticut River, but focuses on the suddenly-changing weather as well.

The scene’s composition is unlike any other landscape and captures the stunning scenery and untamed beauty that the country was widely known for across the world.

At a time when much of the United States lay unsettled, Cole’s painting was one that might point to the idea of “greener pastures” that awaited the American people on the frontier.

We hope that you have enjoyed out list of famous American paintings!