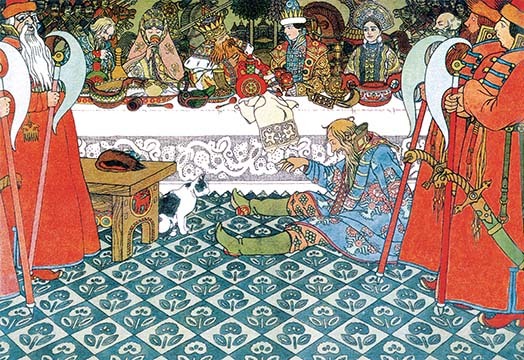 Ivan Bilibin was a Russian artist born in 1876 and is mostly remembered for his illustrative works of folklore.

Art has been a cornerstone of human evolution and enlightenment. From the cavemen to modern-day illustrators, humans have come a long way in using narrative images to tell stories.

Yet, most of us have a rather rustic and narrow view of illustration throughout Art History.

After acknowledging Pre-Raphaelites and admiring Impressionists and Symbolists, we don’t take long before ending our horizons of illustration with Europe’s contemporary illustrations.

What we have yet to realize is that the world of illustration is and has always been one of the most versatile forms of art.

A blend of design, depth, detail, lightness, and dark with a strange muteness, the works of Ivan Bilibin are one such example of fascinating visual arts.

His best works of art are a vivid visual illustration of Russian history and folklore and more importantly, they are a world on their own.

The underrated Russian artist, Ivan Bilibin was born in Tarkhovka, a suburb of St. Petersburg on 4th August 1876.

He was a son of a naval doctor who graduated from the law faculty of St. Petersburg University with the intending to become a lawyer.

His deeply rooted passion for drawing from an early age led him to study art simultaneously at Anton Ažbe Art School in Munich in 1898.

His experience in a private studio at Munich opened him up to a new world of stimulating ways to express senses and emotions.

On his return back home, he could not help but feel the void that the absence of art was creating in his life. He soon came across a similar set-up in St. Petersburg, managed by Ilya Repin.

During his time at the studio, Bilinin developed high regard and respect for Repin as an artist. In 1930, he expressed his feelings in his In Memory of Repin as: “He thought and taught in forms and lines as simple as we think and talk to each other in words.”

In 1899, he attended an exhibition by Victor Vasnetsov which comprised mostly of the scenes from folklore and opera.

His work inspired him so much that he found himself drawn to the wilderness and distant regions of Old Russia.

The artist’s work from this trip was highly appreciated by the Department for the Production of State Documents and he was, thus, employed to illustrate a series of fairy tale books.

The Tale of Ivan the Tsar’s Son, The Frog Princess, The Little White Duck, and Vassilisa the Beautiful are among the most famous of Ivan Bilibin’s illustrated books.

Bilibin’s ability to use colors vividly, his delicate strokes, just the right selection of shades for the atmosphere are what made his illustrations stand out.

These illustrations not only narrated a scene explicitly, but they also had the ability to bring themselves to life in a viewer’s head. These books gave young Bilibin a promising head start into a remarkable career of illustration and stage designing.

Ivan Bilibin was the creator of the most replicated image in modern Russia. Very few people know that the two-headed eagle on coins of the Bank of Russia belongs to Bilibin’s brush. Painted in 1917, this eagle has become the official symbol of Russia.

Despite possessing the professional qualifications to practice as a lawyer, Bilibin did not once have a speck of doubt that his professional identity could be nothing but that of an artist.

His initial commissions came for magazines and journals from the World of Art. Ten of his illustrations for fairy tales were put on show in a World of Art exhibition.

However, the biggest breakthrough in his career by far came after his commission by the Department of State Documents.

By 1904, Bilibin completed a series of illustrations and due to his outstanding work, the department commissioned him to illustrate fairy tales by Pushkin.

He also provided designs for the premieres of Rimsky-Korsakov’s version of Boris Godunov (1908), and The Golden Cockerel (1909).

The dominant subject matter of Bilibin’s work is guided by a unique sense of place. In most of his illustrations, the wilderness of Old Russia is the overriding visual details that give his work as many distractions as focal points.

His work also contains a wide array of traditional designs, patterns, and motifs.

Above all, Bilibin’s ability to bring a sense of reality to his illustrations is the primary factor that increases all of his works’ appeal tenfold.

The subject matter of his work encircles traditional Russian culture. This is strongly reflected in his illustrations for folk tales for children.

Ivan Bilibin committed most of his work to the theme of Russian fairy tales. He found a great deal of inspiration from decorative and folk art that he came across on his trips to Northern Russia.

Ivan Bilibin died in February of 1942 in Leningrad during the German blockade. He starved to death as he refused to leave the city and was buried in a collective grave.

The great artist left several of his works unfinished which he was working on during the last few years of his life. Like his other remarkable finished masterpieces, this unfinished work is still not short of his design details and impeccable illustrations.

Needless to say, his undying legacy is worthy of stepping out of the local boundaries of art and marveling at his phenomenal illustrations of folk and fairy tales.