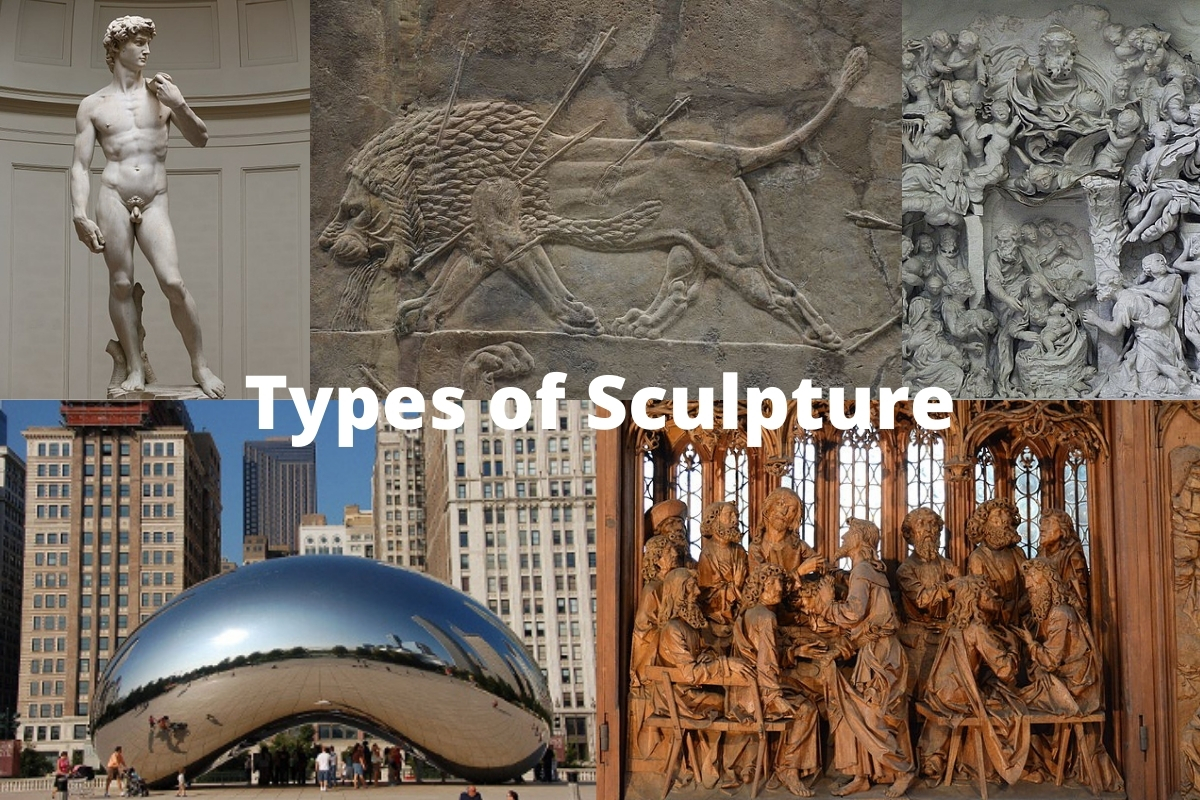 Sculpture has endured as one of the most popular means of expression for humans all over the world. Various cultures have used different types of sculptures to convey a significant meaning and commemorate their leaders or other pivotal societal figures.

These sculptures range from those small enough to fit in the palm of the hand to giant stone reliefs carved into the side of a mountain.

There are numerous types of sculpture that have been used throughout recorded history. Understanding what makes each form of sculpting unique gives us a greater appreciation for the effort and skill required to produce such works.

In this article, we will explore each of the most prominent types of sculpture and how they are distinctly different from one another.

Reliefs are one of the oldest forms of sculpting that date back as far as 25,000 years ago in the caves of eastern Europe and other parts of the world.

The measure to which these sculptures differ in depth is what separates the different kinds of relief sculpture. Reliefs can be as simple as a slight etching into the stone, wood, or other material background or as detailed as most of the three dimensional works that have been done throughout history.

High relief sculptures offer us a much more three dimensional work than any other form of relief. These works are typically carved and chiseled very deep into the material and can sometimes stand out with more than 50 percent of the work being ‘in the round.’

High relief works were very common thousands of years ago and were a favorite technique that ancient cultures used to adorn various temples and other prestigious structures.

The most common type of relief sculpting is known as low relief. As the name denotes, low relief works offer a very low degree of depth that the artist used in creating the sculpture itself.

This type of sculpture can be done on virtually any type of surface and is much easier than high relief as there is a much lower potential that the artist might damage the sculpture.

Virtually every culture on Earth has, at some point or another, used low relief sculpture to capture certain aspects of their society and beliefs.

A bas-relief sculpture is virtually the same as a low relief work, but derives its name from the Italian word ‘basso’ or the French ‘bas’ which means ‘low.’ These words are sometimes used interchangeably and the Italian term ‘basso rilievo’ is considered to be a much older terminology used to describe these sculptures.

Bas-relief was a favorite method of sculpting for the ancient Assyrian and Egyptian cultures who carved their hieroglyphic language and history into stone tablets.

Sunken relief is considered to be an ancient technique used by Egyptians and other, more primitive cultures who recorded much of their history on stone or wooden tablets.

Unlike low relief sculptures, sunken relief works are done on a background that is mostly flat with the carving being done to indicate linear edges and outlines.

It’s known as a ‘sunken’ relief simply because the scene and the figures themselves are at the same level as the flat surface of the background. The central figures in these sculptures do not protrude out from the main surface in the same way low and high relief sculptures do.

Counter relief sculptures are, as their name indicates, the exact opposite of low and high relief works. Instead of the figures and shapes being carved to protrude in an outward fashion, they are carved deeper into the work to indicate various ranges of depth.

This type of sculpting is a more modern version used in what many describe as an abstract method of sculpture and was not commonly used by ancient artists. Counter relief sculpture is basically a form of engraving that involves carving into a background surface instead of chiseling the background away from the work’s central figures.

2. Sculpture in the Round

The term ‘sculpture in the round’ simply refers to a three dimensional work. These types of sculptures are sometimes made to be viewed from one or two angles, but offer a fully ‘round’ viewpoint advantage to the observer in which they can enjoy the full sculpture in all its grandeur.

Sculptures that are ‘in the round’ are often made to be viewed against a wall or certain type of background while others might be free-standing sculptures that can be observed from a 360-degree perspective.

Carved sculptures date back as far into antiquity as any other form of artistic expression. Ancient cultures used carving as a means to depict certain types of animals or natural elements, as well as various religious figures that might have been used for ceremonial purposes.

Carved sculptures have been done on a wide variety of different materials that include wood, ivory, and other types of mediums. Artists that create carvings must take a chunk of their material and carefully work to remove certain portions in order to produce the desired figure.

Casting is often used more often in modern sculpting, but it has its roots in ancient forms of artwork that involved the use of clay or even different types of metals like bronze.

Making a cast sculpture requires the artist to spend a considerable amount of time creating a mold that would then be used as a form which was covered with the cast materials.

Sculptures cast in bronze were a favorite for ancient Greek and Roman cultures as it allowed them to create a more durable, lasting product than natural stone, which was prone to cracking and breaking.

These types of materials usually included liquid metal many centuries ago, but now are done with a litany of different kinds such as plastic, fiberglass, rubber and many others.

Additive sculpture is vastly different from any other type of sculpting that we’ve mentioned so far. Instead of taking a certain type of medium and removing certain portions of that material, additive sculpture requires the artist to create a form by adding certain material to the work itself.

Additive sculpture is much more common in modern times as artists have a wide variety of different materials and techniques they can use to create certain forms and structures. These materials are often fairly malleable and they allow the artist to manipulate them into the desired shape.

Subtractive sculpture is very similar to carved sculptures or works that are done in the round. This method requires the artist to use a single piece of medium to carve their sculpture out of until the desired outcome is reached.

It’s common for artists to have taken a chunk of stone or other material and worked to remove various parts or add more definition to already existing shapes. In most cases, artists who create subtraction sculptures will take a piece of material that has a shape which is consistent with what they want to produce.

Assembled sculptures are much more common in the modern era than they have been in times past. In recent decades, it has become quite popular for artists to create assembled sculptures using virtually any type of material they want to produce a specific outcome.

This assembled sculpture method is very common for artists who want to create abstract works as it allows them to utilize certain elements and material that might have a significant meaning to the overall work itself.

Many artists in the last century preferred to use certain types of metal which they weld and fit together to create a range of different types of artwork.

Modeled sculpture is very similar to the casting technique we have already mentioned, but it involves the use of any type of material the artist chooses. Modeling works might involve the use of wax, clay or other types of medium which the artist can easily mold and shape to their own desire.

In most modeled sculptures, an artist creates the work using his or her hands, but modern techniques now sometimes involve the use of various tools and even machinery. Modeling sculptures are one of the oldest types of artwork and have been used in many types of ancient cultures for artistic or religious purposes.

Installation sculpting involves fitting a number of different pre-formed pieces together to create the final work. These are three dimensional sculptures that are often made of any type of material the artist chooses, including wood, metal, ceramics and other items. Installation art is often a work which envelopes an entire space, such as a museum floor or room.

The many different individual pieces are fixed in place using various methods to create a final work. Modern sculptors have used the installation method in a very creative manner by hanging certain pieces of the sculpture from a ceiling or fixing them in place through other methods.

In some cases, talented artists have been able to create installation sculptures that produce multiple figures and images depending on the angle at which the viewer is looking at the work itself.

Kinetic sculpture is that which involves the use of certain shapes, contours, lines and light effects to create actual or perceived movement in the work itself, or the immediate surroundings.

Kinetic artwork is a much more modern technique than most of the others that we’ve mentioned here and is quite common in the 21st century.

Certain kinetic sculptures today might involve the use of virtual movement which the viewer perceives on a screen or with other methods. Many of the most popular types of kinetic sculptures that are displayed today are moved using mechanical devices or by the wind in some cases.

Also known as land art, earthwork sculptures are works that are done in the ground or using various types of naturally-occurring rocks or wood.

Earthwork sculptures actually date back thousands of years as certain cultures in Northern Europe and South America have used this method to create giant monoliths that can be seen from an aerial viewpoint.

Older earthwork sculptures often involved creating works that held a likeness to certain animals or humans while others revolved around distinct shapes and patterns.