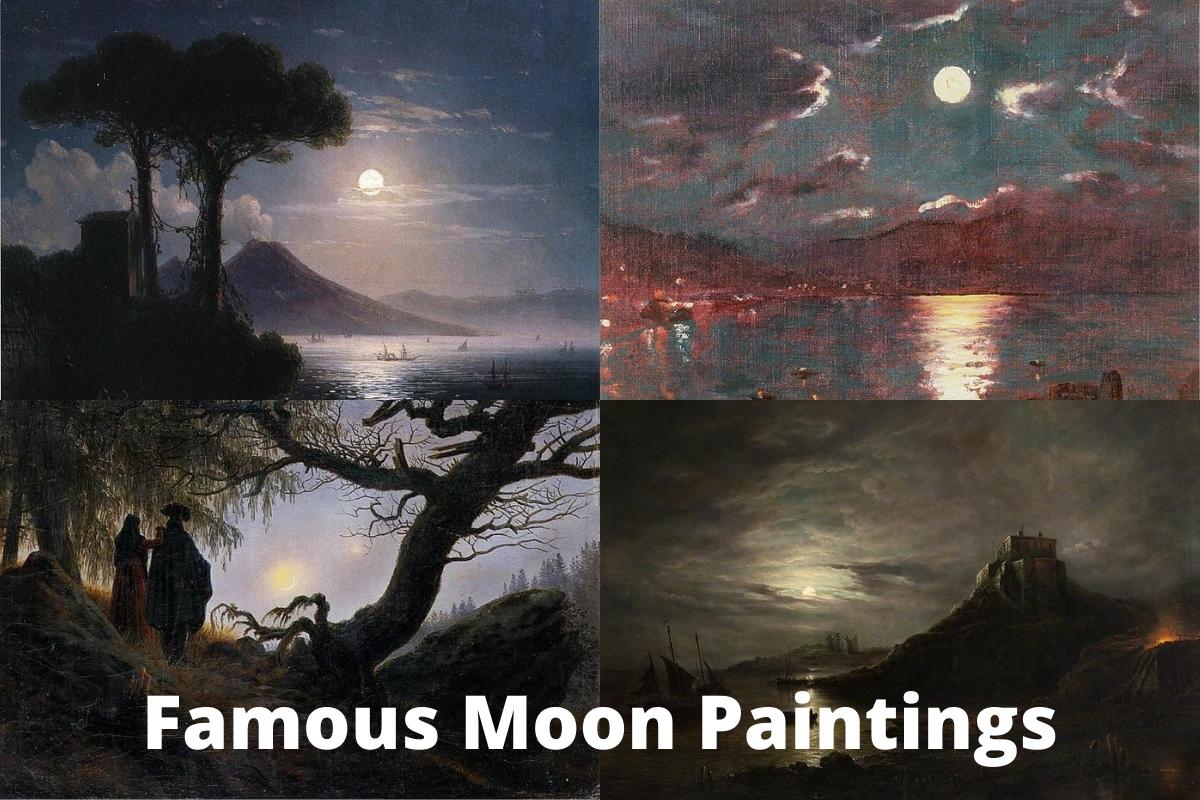 Nature has long been a focus of many artists’ paintings from the wide variety of art movements going back to well before the Italian Renaissance.

While it’s no secret that most artists prefer to center their efforts around painting landscapes and various subjects or scenes in the bright sunlight or even the unique illumination of dawn or dusk, nighttime paintings offer a seldom-explored bit of artistic expression that requires an exceptional ability, as well as a different kind of mastery.

At certain phases in the lunar cycle, the moon is capable of providing more than enough light to brighten the darkness of night and bring to life anything that an artist wants to portray under the cover of darkness.

The moon is one of the more intriguing and mysterious elements of our natural surroundings and has long been the focus of many cultures dating back many thousands of years.

In this article, we will explore some of the most popular moon paintings ever created while also examining the motivations and intentions behind each artist’s efforts to create these masterful works.

Caspar David Friedrich is remembered as one of the most celebrated artists from the Romantic period when it came to producing exceptionally-beautiful landscape paintings.

He is responsible for painting such masterpieces of natural wonder at Wanderer above the Sea Fog and many other works that featured incredible landscapes from throughout the world.

His style of painting mostly revolved around daytime views of certain locations, but one painting in particular is remembered as perhaps the most famous paintings of the moon ever done.

The work is titled Man and Woman Contemplating the Moon and prominently features a bright and glowing crescent moon that seems to be rising just over the horizon.

In the painting, a couple are seen viewing the moon from a rocky outcropping where a tree is jutting out of the hillside, creating a somewhat eerie and mysterious setting that is amplified by the gently-lit scene.

This painting is considered to be one of Friedrich’s best works as it required an incredible amount of precision and creativity to bring to life the subtle illumination that the moon can sometimes bring to a night sky and landscape.

It is unclear why these two are viewing the moon in the twilight hours, but the glowing moon wonder is at the very center of the painting.

John Moore of Ipswich was revered as one of the most celebrated artist to ever focus on seascapes and other marine scenes and settings from the 19th century.

He began his career as a painter with no training or guidance from any other artist and managed to become a truly exceptional artist by the end of his lifetime, which he spent most of in the port town of Ipswich, which is located near Suffolk, England.

One of Moore’s most memorable paintings is known as Lindisfarne Castle and Abbey, Holy Island, by Moonlight. Finished in 1877, this painting features a spectacular night view of the Castle at Lindisfarne, which is seen towering above the surrounding landscape.

This small island was once the scene of a terrifying invasion of Viking raiders in the 9th century, but had since grown into a northern stronghold for England by the time this work was painted by Moore.

The moon is seen brightly illuminating the cloudy night sky, playing across the calm waters in the small cove near the foot of the castle’s perch.

Vincent van Gogh is widely recognized as one of the most gifted painters from history, despite his many afflictions and battles with mental illness throughout his short lifetime.

He is considered one of the most prominent figures in the Post-Impressionist era and many of his most notable paintings focus on natural landscapes, as well as cityscapes from throughout Europe during the 19th century.

One of his lesser-known paintings that is still considered a masterpiece by many critics and art historians is titled Road with Cypress and Star.

This painting was done in 1890 and features Van Gogh’s characteristic swirling style of painting that is quite similar to his Starry Night masterpiece, which he created just a year before.

This painting is well-remembered for the tranquil nighttime setting that Van Gogh captured, as well as stars and moon, which are seen on either side of a towering cypress tree.

James McNeill Whistler was a 19th century painter that was quite well-known for creating works which focused on nocturnal settings.

He painted some of the more prestigious locations from around England and other parts of Europe, but unlike other artists, chose to depict these scenes as being under the cover of darkness.

One of his most iconic works that is part of his many nocturnal paintings is titled Nocturne, Blue and Gold – Southampton Water.

Completed in London in 1872, this famous painting is somewhat along the same lines as his earlier maritime works while also including his passion for depicting moonlit settings from throughout London.

The painting itself features a very dark and shadowy scene from the English Channel from a location near Southampton.

The storms that would often strike ships at night in the seas were one of the most feared occurrences among sailors up until the late 19th century when steam-powered vessels would begin to dominate the oceans.

Thomas Moran is quite possibly the most prolific landscape painter to have ever lived and was known for his unique ability to portray some of the most beautiful natural locations from throughout the world in his paintings.

He devoted his efforts to creating a scene of dread and terror from the high seas in his 1901 painting titled Moonlit Shipwreck at Sea. This painting features a tumultuous ocean with towering waves that are crashing to and fro under the night sky.

Moran’s painting included his characteristic high degree of realism and features a raging sea that’s brightly-illuminated by the moon with small bits of debris floating atop the water’s surface.

Winslow Homer was a well-known figure in the American art scene throughout the 19th century and was regarded as one of the most gifted landscape painters from the time period.

He painted many scenes that depicted events from the Civil War, as well as the time after when the United States began to grow and stretch across the western part of the North American continent.

One of Homer’s most highly-regarded works that featured a nocturnal scene was titled Moonlight, Wood Island Light.

This 1894 painting was a depiction of the shoreline that was located just a short distance from his Portland, Maine studio where he spent most of his final years.

The painting highlights the glow of the bright moonlight as it is cast over the sea just outside of the crashing waves near the shore. The dense clouds seem to magnify the moon’s glow and create a somewhat otherworldly scene along the shoreline.

Joseph Mallord William Turner is one of the most celebrated figures from the Romantic movement, especially among artists from England during the early to late 19th century.

He was an exceptional landscape painter and managed to bring out the natural beauty that could be witnessed at various locations from around England and other parts of Europe.

One painting in particular is a true nocturnal masterpiece that is a clear addition to our list of the most famous moon paintings ever created.

Titled Moonlight, a Study at Millbank, this 1797 work features a bright, full moon that’s hovering over the River Thames at Millbank.

The painting has an almost photo-realistic quality and Turner’s depiction of the moon’s vibrant glow over the river is enough to make the viewer feel like they are standing along the banks of the famous river taking in the calm night sky.

Atkinson Grimshaw was a notable Victorian-era artist who is remembered as one of the most masterful artists in history to have focused the bulk of his efforts on nocturnal and moonlit settings.

Many of his works seemed to center around the cityscapes and the outskirts of various towns and places from England in the mid-to-late 19th century and art critics and enthusiasts from the time period took notice.

One of his most notable paintings is titled A Moonlit Evening and features a serene view of a roadway outside a large house. The moon brightly shines high in the sky and casts light down on the rainwashed street and trees below while a lone young woman is seen walking along the path.

The lighting in this work is often viewed as so realistic and captivating that only a nocturnal master like Grimshaw was capable of producing such a painting.

Welsh artist Christopher Williams was revered for his ability to capture breathtaking scenes from throughout England and other areas in the late 19th and early 20th centuries.

He came from a prominent family and entered the Royal College of Art in 1893 when he was 20 years old.

He would quickly rise and become one of the most well-known painters of his day, producing a wide variety of works that included cityscapes, portraits, and landscapes, all of which were masterfully done. One of his more intriguing works is titled Barmouth Moonlight and was done in 1913.

The painting depicts a luminous moon towering overhead, brightly shining down on the small, quaint seaside town of Barmouth. The lights of the small fishing boats, as well as the glowing lamps throughout the town are clearly visible, as are the shadows of the cascading mountains in the background.

Russian artist Ivan Aivazovsky is one of the most widely celebrated painters who focused the majority of his career on creating incredible maritime scenes from throughout the world.

He is responsible for painting such amazing masterpieces as The Ninth Wave and various other works that were capable of putting the viewer in a position to where they almost felt like they were on the rolling waves of the sea with the ocean spray lapping up over the bow of a sailing ship.

Aivazovsky created one painting that showcased the moon in all its nocturnal glory in one work titled Moonlight in Naples.

Finished in 1842, this painting depicts the calm, quiet night of the bay at Naples. The moon is seen beaming out over the water, illuminating the ships anchored in the harbor.