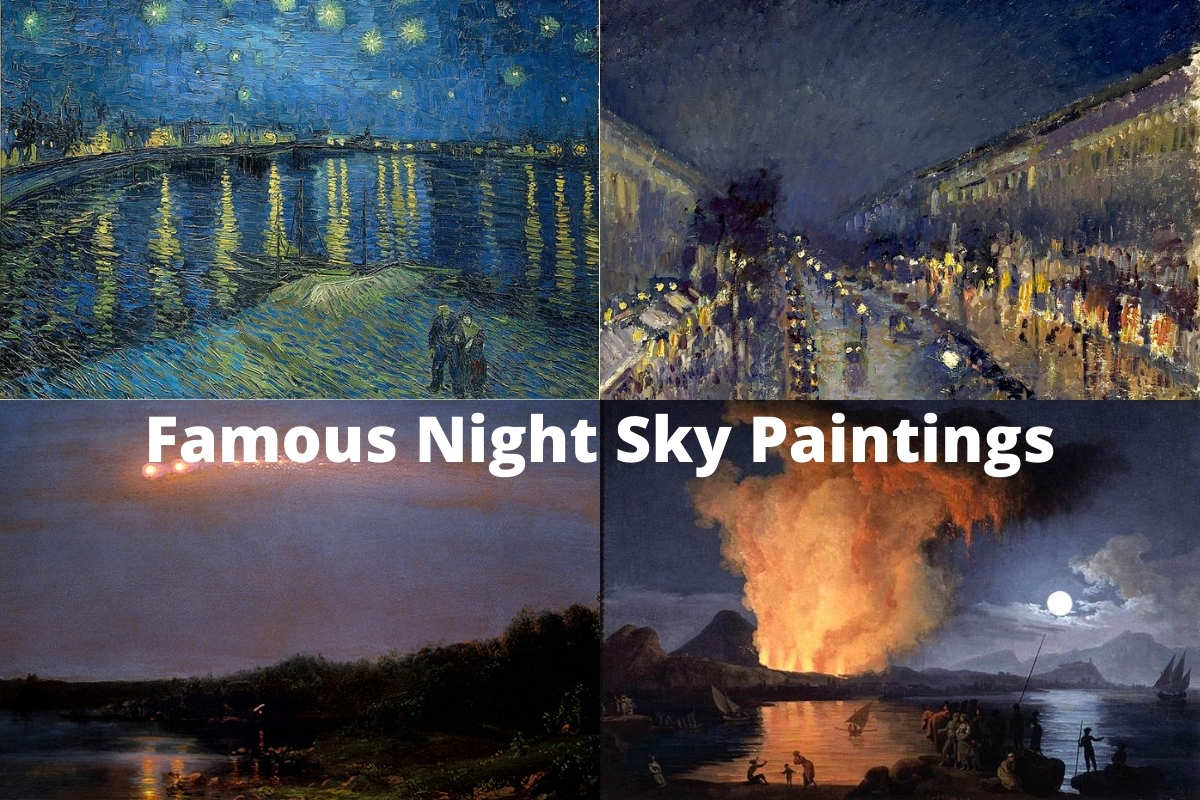 The night sky has long captivated humankind for thousands of years and has been a principal focus among artists for equally as long. On a clear night, we are able to view seemingly endless numbers of stars, as well as such wonders as the Milky Way Galaxy.

Another fascinating aspect of the night sky is the many different phases of the moon and how they connect into our monthly calendar system.

Painters from many different eras throughout history have portrayed the sky at night in different ways, with some focusing on the bright stars and constellations. Others have worked to depict the mysterious nature of the moonlight and how it transforms our world into a new spectacle compared to the sun’s brightness.

Here are 10 of the most famous night sky paintings that have ever been done by some of the most highly-celebrated artists in history.

There is little argument among art critics and historians that one of the most widely-acclaimed paintings centered around the night sky is Vincent van Gogh’s famous work titled The Starry Night.

Van Gogh was equally talented and mentally troubled throughout his relatively short life. Born in 1853, most of van Gogh’s work would become more celebrated after his death just 37 years later.

The Starry Night is considered to be one of the most iconic Impressionist paintings from the era and features a sprawling depiction of the moon and stars stretched out over the small town of Saint-Rémy-de-Provence in France. This particular view is said to be what van Gogh saw from the window of his asylum roughly one year before his death.

Van Gogh painted many different variations of the same view, each with certain brushstroke characteristics that gave it a sort of uniqueness.

The version that is most popular is known for its circular and wide, sweeping brush strokes. This was one of the few nocturne paintings that van Gogh created and is viewed by many as the most memorable and famous of any in history.

Few painters were more widely known and recognized in America than 19th century artist Winslow Homer. He developed a prestigious reputation for his ability to create distinct landscape paintings that devoted himself to producing maritime works throughout much of his career in the late 1800’s.

Homer’s most notable work from his lifetime is said to be his 1894 painting titled Moonlight, which was also known as Moonlight, Wood Island Night.

The work is a brilliant portrayal of the glowing moonlit sky over the rocky shores of Wood Island, which is located a short distance from Portland, Maine.

While most artists who create works that focus on the night are said to have done them later in their studio, historians note that Homer painted Moonlight on-sight by the light of the moon in just five hours after being inspired by the sheer beauty of the shoreline.

Viewers can see a small speck of orange just above the ocean horizon, which represents the historic lighthouse on Wood Island.

Camille Pissarro is one of the most memorable figures from the Impressionist movement that took place in France and the surrounding parts of Europe in the latter part of the 19th century.

He grew up on the island of St. Thomas, which is part of the Virgin Islands in the Caribbean and would later move to Europe to pursue his art career.

Pissarro painted multiple works based on this one single viewpoint, with one of the most famous being titled Le Boulevard de Montmartre, which depicted the bustling street in the daytime.

Boulevard Montmartre; Night Effect is a painting of the same view under the cover of darkness. The shining lights along the street and inside the shops are what truly brings this painting to life and resonates with viewers.

Thomas Moran is remembered as an artist that was at the forefront of capturing the wild and rugged beauty of the American Frontier during the late 19th and early 20th centuries.

Moran was part of the famed Hudson River School and focused most of his efforts on spectacular landscapes from locations throughout the American landscape, most notably from the western portion of the country.

One of the few maritime works he completed would be remembered as a true masterpiece that depicts the moon’s glow over the raging seas and winds. Painted in 1901, this work gives the viewer the sense that they can almost feel the blustery gusts of wind and the tossing of the massive waves under the night sky.

A small bit of wreckage from a ship can be seen in the lower right-hand corner of the foreground—representing all that’s left from a sunken ship that was the victim of the tumultuous storm.

Just one year before he painted The Starry Night, Vincent van Gogh would create another work that is also considered to be among the most iconic night sky paintings of all time.

This painting is another masterful Post-Impressionist creation that van Gogh finished at a time when he was less affected by his mental illness, according to art historians.

Titled Starry Night Over the Rhône, this 1888 painting is one that portrays the wonder of the night sky along with the beauty of the town’s reflection in the water’s below. The Rhône is one of the more well-known rivers that flows through France.

Van Gogh remarked that the constellation Ursa Major’s light was somewhat more pale in comparison than the yellowish glow that was produced by the gas-lit lamps along the edge of the city of Arles.

Joseph Mallord William Turner is remembered as one of the most prolific English artists to have worked during the height of the Romantic era. Many of his most notable paintings feature landscapes or cityscapes, but he is perhaps best known for his various maritime works.

One of Turner’s most famous paintings that centers around a brightly-lit night sky is titled Keelmen Heaving in Coals by Moonlight. This 1835 painting was done at a time when there was a high demand for coal and it would go on to fuel the industrial revolution.

The painting seems to depict a dichotomy between the large sailing ships on the left and the darker, flat-bottomed boats on the right that are seen hauling the coal. The gulf between the two contrasts is illuminated by the moon’s brightness on a clear night.

7. View of the Eruption of Mount Vesuvius – Pierre-Jacques Volaire

The eruption of Mount Vesuvius, which is located on the Gulf of Naples, Italy, was said to be one of the most shocking and transformative events that has ever happened in recorded history. Historians tell of the blast that sent rock particles and volcanic lava and soot more than 20 miles into the atmosphere.

Pierre-Jacques Volaire painted a work that was aimed at capturing the unreal catastrophe in his work titled View of the Eruption of Mount Vesuvius.

Art historians and critics believe Volaire created the painting some time during the 1770’s and is based on the descriptions that we have of the eruption from Pliny the Younger, who was a historian who wrote the only surviving account of the ordeal.

The painting shows the surreal nature of the volcano’s blast coupled with the serene nature of the night sky, which would have certainly been quite a spectacle to behold during the two-day eruption.

Aert van der Neer was a painter who lived and worked during the time known as the Dutch Golden Age who mostly focused his efforts on creating nighttime landscape paintings.

Throughout his 17th century career, he produced numerous works that would go on to become some of the most memorable paintings from the era while also garnering fame for his ability to depict the night.

Van der Neer’s most memorable work is his River View by Moonlight, which art historians believe he completed some time in the 1640’s. The painting highlights the contrast that exists between the dark features of the land along the banks of a river that’s illuminated with the brightness of the moon.

The exact location of the painting is unknown, but some art critics believe it is likely to be a view of the rural area along the river just outside Amsterdam.

Frederic Edwin Church is remembered as the most prominent member of the famed Hudson River School. He enjoyed an exceptional amount of celebrity for his status as a landscape painter who depicted various scenes from the wildest reaches of the American Frontier.

One of Church’s most highly-acclaimed paintings centers around the famous meteor event that took place in July of 1860. The artist created a work which he aptly titled The Meteor of 1860, which depicts the event in stunning detail.

Unlike other nocturnal paintings, Church’s work featured a night sky that was illuminated by the fiery light of the blazing meteor as it entered the Earth’s atmosphere.

The contrast between the dark landscape and the brilliance of the sky with the meteor’s spectacle only acts as a means to further represent the miraculous nature of the event.

A reflection of the flaming orange and red hues can also be seen in the waters of the Hudson River near Catskill, New York.

James Abbott McNeill Whistler is another well-known American painter that was known for his unique style of portraying landscapes and other scenes that were the focus of his paintings.

He is credited with establishing the lesser-known art style known as Tonalism and one of his most famous paintings is a perfect example of what various paintings of the movement entailed.

Historians record that Whistler created this work sometime between 1872 and 1877 at a time when Tonalism had not actually been fully established yet.

The title of the painting is Nocturne in Black and Gold – The Falling Rocket and features a night sky that’s dimly lit by the remnants of a series of fireworks.

Whistler’s aim was to capture the moments after the fireworks had exploded and were falling back down toward the ground with thick clouds of smoke visible in the sky.