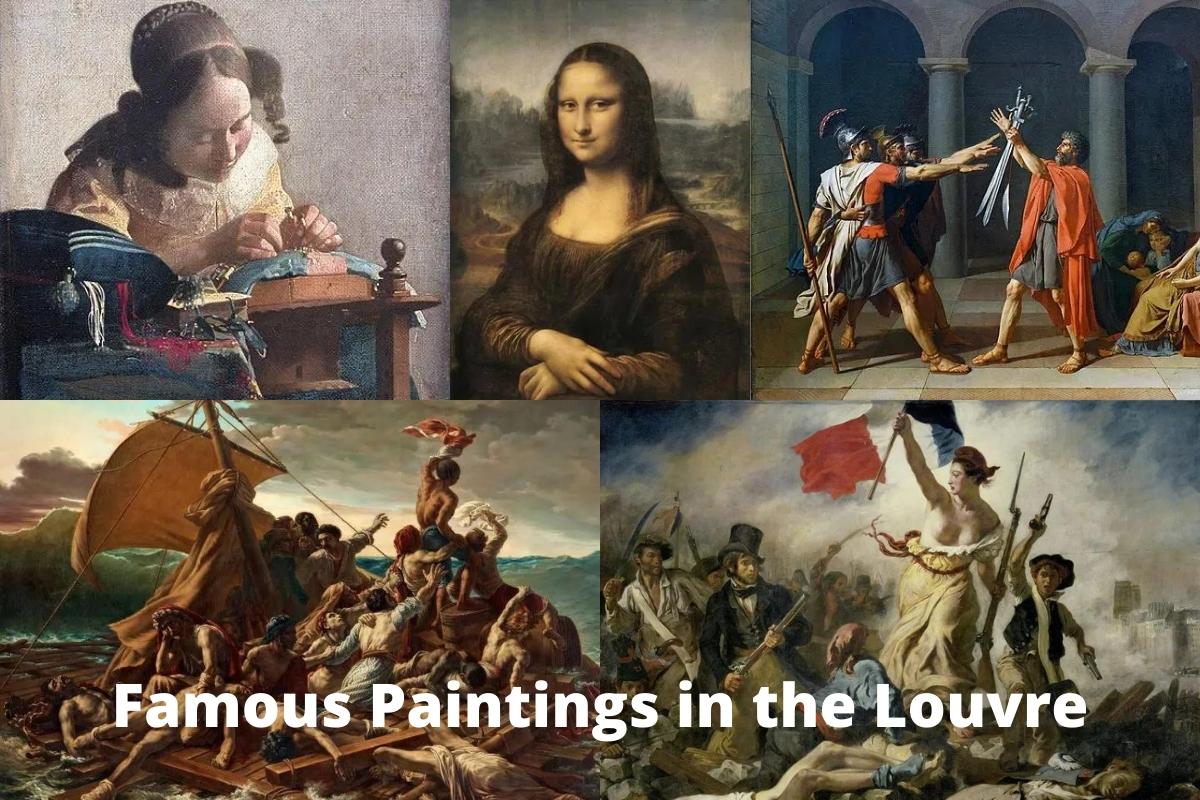 The Louvre is the most visited museum in the world and a historic landmark in Paris, France. It houses some of the world’s most famous pieces of art, including the Mona Lisa and the Venus de Milo.

It is a city landmark situated on the Right Bank of the Seine in the city’s 1st arrondissement (district or ward).

At any one moment, about 38,000 artifacts ranging from prehistory to the twenty-first century are shown across an area of 72,735 square meters (782,910 square feet).

The Musée du Louvre has around 380,000 artifacts and exhibits 35,000 pieces of art in eight curatorial divisions devoted to the permanent collection.

Sculptures, objets d’art, paintings, sketches, and archaeological artifacts are on display at the Louvre.

Famous Paintings in the Louvre

Lisa del Giocondo, wife of Francesco del Giocondo and mother of their two children, is shown in Mona Lisa. Leonardo da Vinci began work on it about 1503-1505 and completed it in 1519. The picture is presently on display in the Louvre Museum in Paris, which was created in 1637 by Louis XIV, King of France.

It’s hard to think that this artwork was completed 400 years ago when it looks so well now.

It is recognized as a masterpiece in the art world, but it only became well-known to the general public when it was stolen from the Louvre in 1911 by an Italian employee named Peruggia.

As an Italian patriot, Peruggia believed that the masterpiece should be returned to Italy and shown in an Italian public gallery rather than a French one.

It was discovered and eventually returned to the Louvre, where hundreds of people line every week to see it.

2. The Raft of the Medusa – Théodore Géricault

Before putting brush to canvas, the artist did considerable research on the incident and thought about how he would convey the grim reality of being stranded at sea.

Géricault constructed a scenario based by two shipwreck survivors that depicted a more optimistic picture of the disaster than what was really published about it.

The survivors of the French Royal Navy ship recalled fighting among themselves, leading to cannibalism. The theme of this piece is the hopeful yet terrible sense of being trapped at sea.

The French Revolution was one of Europe’s most violent times. The lesser-known July Revolution, which took place in the summer of 1830, saw less murder but an outpouring of passion on the side of the French people in order to oust what many saw as an undeserving king.

The same year, Eugene Delacroix painted Liberation Leading the People in an effort to inspire the French people to continue their march toward total liberty from the monarchy that had hampered their freedoms for so long.

The painting depicts a valiant attack by a group of ordinary Frenchmen armed with muskets. Their front is dominated by a charming female figure known as Marianne, who represents the French Republic.

She is clad in a garment that barely covers half of her body and wields a French flag and a rifle, as if inviting the soldiers to push forward over the warriors of the slain monarch.

4. Oath of the Horatii  – Jacques-Louis David

Much of Jacques-Louis David’s early work was dedicated to representing the most important Classical narratives and events.

While studying at Rome’s French Academy in the early 1780s, he developed an interest in some of Rome’s most famous people and stories. In 1784, he created a masterpiece that many critics and historians regard as David’s most famous picture.

Oath of the Horatii is notable for incorporating elements of the Neoclassical style, such as rich colors and a great emphasis on historical accuracy for what was supposed to be the genuine story of the event.

The film is based on a story from the seventh century B.C. concerning a feud between two cities.

In this image, the Horatii brothers’ father is shown grasping their swords as the brothers salute him before heading to battle.

5. The Wedding at Cana – Paolo Veronese

The Wedding Feast at Cana (563), by Paolo Veronese, is a realistic painting of the biblical tale of the Marriage at Cana, in which Jesus magically transforms water into red wine.

The large-format (6.77 m 9.94 m) oil painting, executed in the late Renaissance Mannerist style (1520–1600), embodies the artistic goal of compositional harmony, as pursued by the painters Leonardo, Raphael, and Michelangelo.

High Renaissance art (1490–1527) emphasized human figures of ideal proportions, balanced composition, and beauty, whereas Mannerism exaggerated Renaissance ideals — of figure, light, and color — with asymmetric and unnaturally elegant arrangements achieved by flattening the pictorial space and distorting the human figure as an ideal preconception of the subject, rather than as a realistic representation.

The visual tension between the picture’s elements and thematic instability among the human figures in The Wedding Feast at Cana stem from Veronese’s use of technical artifice, the inclusion of sophisticated cultural codes, and symbolism (social, religious, and theological), all of which present a biblical story relevant to both the Renaissance and contemporary viewers.

The canvas’s visual size (67.29 m2) makes The Wedding Feast at Cana the most enormous painting in the Musée du Louvre’s collection of paintings.

6. Death of a Virgin  – Caravaggio

Caravaggio had been active in Rome for fifteen years when he painted The Death of the Virgin (c. 1601–06). Laerzio Cherubini, a papal lawyer, commissioned the painting for his chapel in the Carmelite convent of Santa Maria della Scala in Trastevere, Rome; the work could not have been completed before 1605–06.

The representation of the Virgin’s Death generated a modern uproar and was rejected by the church as unsuitable.

Giulio Mancini said Caravaggio modeled the Virgin after a prostitute, maybe his lover. The violation of decorum resulted in the painting being rejected by the fathers of Santa Maria della Scala and replaced with a painting by Carlo Saraceni, a close admirer of Caravaggio.

The picture was purchased by Vincenzo Gonzaga, Duke of Mantua, on the suggestion of Peter Paul Rubens, who described it as one of Caravaggio’s greatest works. Between April 1 and 7, 1607, Giovanni Magni, the duke’s envoy, temporarily displayed the artwork at his villa on the Via del Corso.

In 1627, the duke’s collection was sold to Charles I of England. During his execution, the English Commonwealth auctioned off his collection in 1649, and the picture was purchased by Everhard Jabach, who in 1671 sold it to Louis XIV for the French Royal Collection, which became state property after the French Revolution.

It is now on display in the Louvre. It was presented in the Academy of Painters for less than two weeks before leaving Rome. Caravaggio, on the other hand, had abandoned Rome by then, never to return publicly.

Da Vinci created two different versions of the Virgin of the Rocks. The first version, above, is regarded the ‘prime version’ (the first or earliest) and is presently housed at the Louvre. The second version, known as the London Virgin of the Rocks, is housed in the National Gallery in London.

Both versions were initially oil on wood panel, but the Louvre version was transformed to canvas in 1806 by French restorer Fr Hacquin.

Two other paintings are linked to the commission: side panels with angels playing musical instruments, completed by Leonardo’s associates. Both are on exhibit in London’s National Gallery.

Both paintings represent the Madonna and Child, as well as the newborn John the Baptist and an angel, against a rocky backdrop, thus the popular name. With the exception of two small variations, the compositions of each are almost similar.

The angel’s gaze and right hand have undergone significant compositional alterations. There are several minor changes in the paintings, including color, lighting, vegetation, and Leonardo’s use of sfumato in the Louvre version.

Raphael created one of the most renowned paintings on demons during the Renaissance period in 1518. St. Michael and the Devil is the title of the piece, although it is also known as St. Michael Vanquishing Satan.

Raphael finished the picture when Pope Leo X urged him to explore the narrative of St. Michael conquering a demon.

The picture shows a victorious St. Michael swooping downward on top of Satan, who is flung down and pinned to the ground.

St. Michael is seen standing with one foot on Satan’s back, clutching a sharp spear in his hands, ready to slay his foe.

Sir Peter Paul Rubens painted The Arrival of Marie de Medici at Marseilles between 1622 and 1625. Marie de’ Medici of France commissioned it to honor the lives of herself and her husband, Henry IV of France.

This was one of Rubens’ 24 paintings in the Marie de’ Medici cycle. The picture is presently on display in the Louvre in Paris.

Marie de Medici commissioned 24 paintings depicting historical events in her life to be displayed at the Palais du Luxembourg. She commissioned the paintings in an effort to persuade the populace of her right to reign.

The French considered her as unworthy of her position as monarch because of her alien ancestry. In 1600, shortly after her arrival, she married Henry IV. He died 10 years later, long before the cycle was completed.

The Arrival of Marie de’ Medici at Marseilles depicts the arrival of the Queen of France by ship at Marseille on November 3, 1600. She is met by unknown people who symbolize France, since they are depicted with the Fleur-de-lis, the French regal insignia.

Neptune and the daughters of Nereus, the Sea God, are shown greeting the Queen at the bottom of the picture. At the top of the image, the figure Fame is flying above, heralding the approach of the Queen.

Rubens used these symbolic characters to turn a real event into an allegory that supports Marie de’ Medici’s claim to the throne. The different French emblems pictured welcome Marie upon her arrival are intended to instill goodwill and respect in her and the French people.

10. The Coronation of Napoleon – Jacques-Louis David

The Crowning of Napoleon is an 1807 painting by Jacques-Louis David, Napoleon’s official painter, depicting Napoleon’s coronation at Notre-Dame de Paris.

Napoleon orally commissioned the work in September 1804, and David started working on it on December 21, 1805, in the decommissioned chapel of the College of Cluny, near the Sorbonne, which served as a workshop. He finished the work in January 1808, with the assistance of his apprentice Georges Rouget.

The Lacemaker is a painting by the Dutch artist Johannes Vermeer (1632–1675) that was completed between 1669 and 1670 and is now housed in the Louvre in Paris. A young lady with a yellow bodice holds up a pair of bobbins in her left hand as she carefully sets a pin in the cushion on which she is creating bobbin lace.

The piece is the tiniest of Vermeer’s paintings, measuring 24.5 cm × 21 cm (9.6 in x 8.3 in), yet it is also one of his most abstract and peculiar. The canvas was cut from the same bolt as that used for A Young Woman Seated at the Virginals, and both works seem to have had similar proportions at the time they were created.

The girl is put against a blank wall, most likely because the artist wanted to exclude any exterior distractions from the main picture. As with his The Astronomer (1668) and The Geographer (1669), the artist most certainly studied the skill of lacemaking before executing the piece; the craft is shown meticulously and precisely.

Vermeer most likely employed a camera obscura to compose the picture, since several optical characteristics characteristic of photography can be noticed, particularly the blurring of the foreground.

Vermeer is able to indicate depth of field in a way that is rare for Dutch Baroque painting of the period by depicting portions of the canvas as out-of-focus.