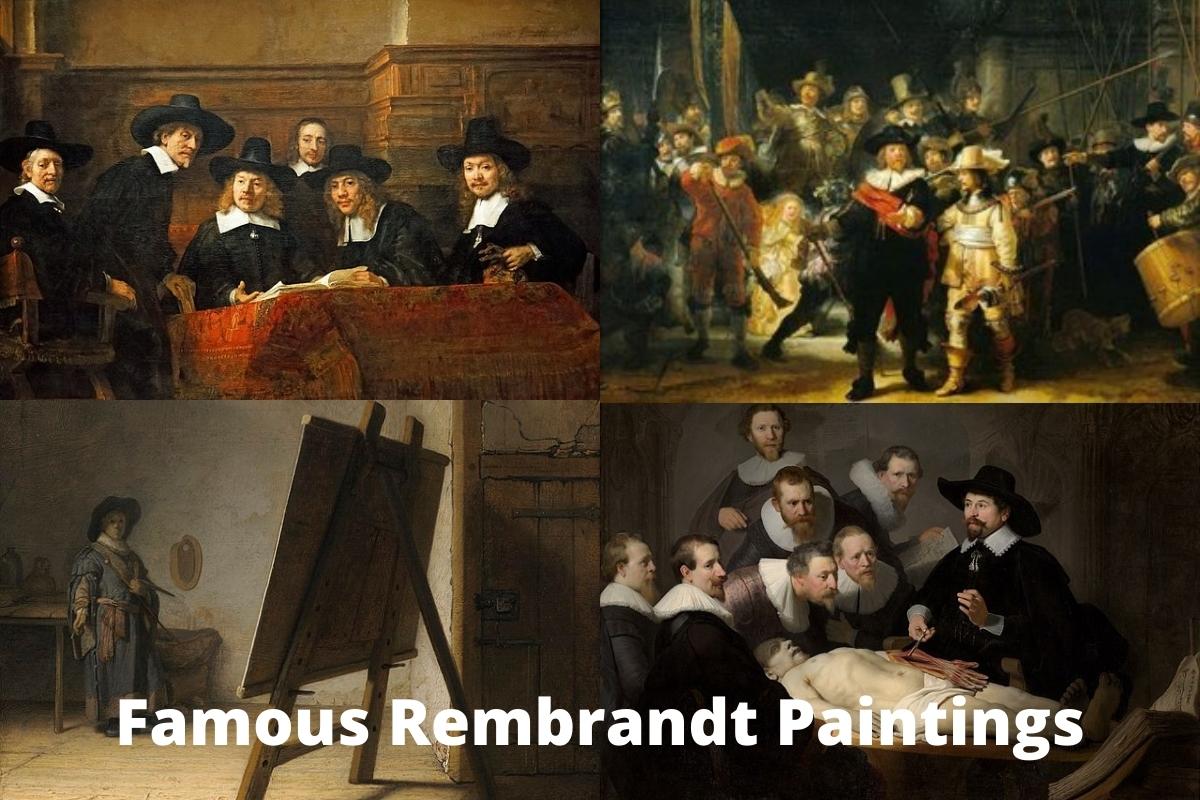 Rembrandt van Rijn, commonly known as ‘Rembrandt,’ was a Dutch painter who lived in the 17th century and is considered to be one of the most famous artists in history.

He painted with a feeling of realism that would come to be considered nearly synonymous with the Baroque era in which he lived and worked.

He was born in the Netherlands in 1606 and is widely regarded as having played a significant role during what many historians refer to as the Dutch Golden Age.

The Baroque style emerged shortly after the Renaissance, and Rembrandt took influence from some of the most prolific Italian painters who had arrived in the Netherlands just a century before.

Rembrandt painted with a strong commitment to the Christian religion, as shown by the fact that many of his most well-known works depict scenes from well-known Biblical tales.

In addition, he is well-known for painting several different self-portraits throughout his life, all of which represented him in a very honest way, as opposed to other painters who would frequently dress-up their own images of themselves in order to seem more artistic.

The Night Watch was painted in 1642 and is Rembrandt’s most famous painting.

It is an extremely well-known piece of art for three separate reasons.

Traditionally, military paintings and group portraits tended to be relatively static settings or scenes with little or no movement.

However, The Night Watch portrays the municipal militia guards, headed by Captain Banning preparing to march out from their barracks.

Second, its size is noteworthy, being a monstrous 3.63m x 4.37m and weighs a whopping 337kg(including the frame.)

Thirdly, it is famous for its dramatic use of light and shadow to direct the viewer’s attention to the scene’s major protagonists.

Rembrandt was a genuine master of light; he painted The Night Watch at the height of his career, and it is often regarded as his most significant work.

It is part of the collection at the Amsterdam Museum but is prominently exhibited in the Rijksmuseum as the museum’s most well-known artwork. The Night Watch is one of the most iconic paintings from the Dutch Golden Age.

It has been the victim of three major acts of vandalism and has undergone extensive restoration twice, the first attack did little visible damage due to a very thick layer of dark varnish.

The varnish was so dark that it created the false impression that it showed a night scene, resulting in the picture’s commonly used name.

In reality it was much brighter than before the varnish was removed and the painting restored.

2. The Return of the Prodigal Son

Rembrandt van Rijn was well-known for his paintings’ realism features, particularly those emphasized by light and gloom. His artwork, The Return of the Prodigal Son, depicts one of Jesus’ most well-known parables, in which a parent and son reconcile.

Rembrandt completed the work in 1669 and has been lauded by art aficionados and critics for capturing an emotional moment in the scene, as well as for the painting’s great degree of detail.

According to the Biblical tale, the Prodigal Son departs from his father’s house with his early inheritance only to return years later poor and pleading to be let back into the family’s home as a servant since he no longer felt worthy of his father’s dignity.

To his surprise, his father embraces his son’s return with wide arms and rejoices, whereas another son is clearly despised by his father’s attitude.

The artwork brilliantly represents the moment of the Prodigal Son’s return to his father, as he kneels at his feet pleading for forgiveness. As the sibling looks on furiously, the father is seen soothing his child.

Considered to be one of Rembrandt’s earlier masterpieces The Anatomy Lesson of Dr. Nicolaes Tulp was a commission by the Surgeon’s Guild.

The painting and was one of Rembrandt’s first commissions after arriving in Amsterdam when he was only 26 years old.

In the 17th century, anatomy lectures were a social event, held in lecture halls that doubled as theater, with students, colleagues, and the general public able to attend for a price. The viewers are dressed suitably for this as they would have considered it a social gathering.

The Surgeon’s Guild commissioned a portrait by a famous artist of the era every five to ten years.
Each of the individuals in the photograph would have paid a specific amount of money to be included, and the more prominent ones (in this instance, Tulp) would have paid more, maybe even up to twice as much to be the center of attention.

4. The Storm on the Sea of Galilee

Rembrandt’s only seascape The Storm on the Sea of Galilee was sadly stolen by an organized crime group while on display at Boston’s Isabella Stewart Gardner Museum.

The picture represents the biblical tale of Jesus calming the storm on the Sea of Galilee, as told in Mark’s fourth chapter.

The vertical format of the artwork depicts a close-up perspective of Christ’s disciples desperately attempting to recover control of their fishing boat in the face of a fierce storm.

A massive wave thumps the bow and tears the sail. One of the disciples is seen puking over the side of the building. Another is a self-portrait of the artist, facing straight out at the observer. Only Christ, as represented on the right, maintains his composure.

The painting is mentioned as the major piece in the Netflix Series – This Is a Robbery: The World’s Greatest Art Heist which is a 2021 American documentary four-part miniseries about the robbery of the Isabella Stewart Gardner Museum on March 18, 1990.

Rembrandt was renowned for his unique ability to depict persons and settings in such a way that the components on the painting appeared to come to life.

His artwork The Jewish Bride, which depicts a passionate meeting between two lovers, is also known in the art world as Portrait of a Couple as Isaac and Rebecca.

This piece depicts a guy holding a lady tenderly, one hand on her back and the other going for her chest. The woman’s hand seems to brush against the man’s outstretched hand, as though she is conveying her own sentiments toward this guy. This picture depicts a couple in intense embrace, but neither man nor lady looks at the other.

Vincent Van Gogh was believed to be so taken aback by this picture that he would willingly trade 10 years of his own life to be able to sit and enjoy it for two weeks.

The painting’s basic but profound subtleties attract a large number of art critics and aficionados, with many citing it as one of Rembrandt’s finest works.

6. Syndics of the Drapers’ Guild

Rembrandt moved to a rented property on the Rozengracht in the 1650s after experiencing financial troubles. The Amsterdam élite stopped knocking on his door as often as they had before.

He remained popular, though, since this illustrious guild commissioned him to create a group picture. Rembrandt created an animated atmosphere by having the wardens glance up from their task, as though disturbed by our presence.

Described by many as his “last great collective portrait” the scene sees the men look out towards the viewer as if they were monetarily interrupted for the sitting of the portrait.

The group is portrayed sitting on a platform in front of the Drapers’ Guild assembly, and they are presenting an account of the year’s business to the assembly – unseen by the spectator.

The men (except from Bel, who is an assistant, as shown by his lack of a cap) are drapers who were chosen to evaluate the quality of fabric provided for sale by weavers to guild members.

Their one-year mandates started on Good Friday, and they were supposed to perform inspections three times weekly throughout that time. The Dutch term staal translates as ‘sample’ and refers to the textile samples that were evaluated.

Danaë is a life-size representation of the Greek mythological heroine Dana, who is Perseus’ mother. She is most likely shown as embracing Zeus, who impregnated her through a gold shower.

It was first painted in 1636, but Rembrandt considerably revised it in the 1640s. The revision altered the placements of Danaë’s head, extended arm, and legs, among other things.

Although Rembrandt’s wife Saskia was originally the model, he eventually replaced her face with that of his lover Geertje Dircx.

On June 15, 1985, a Soviet Lithuanian assaulted Rembrandt’s artwork, hurling sulfuric acid at it and cutting it twice with his knife. The whole center section of the composition was transformed into a patchwork of dots and splashes. Danaë’s face and hair, as well as her right arm and legs, sustained the most damage.

The restoration procedure started the same day. After consulting with scientists, art restorers started to wash the painting’s surface with water in an effort to reduce the damage further.

Belshazzar’s Feast is a significant painting by Rembrandt, and it represents his desire to establish himself as a painter of huge, baroque historical paintings in the manner of his predecessors in the genre.

Although the exact date of the picture is uncertain, the majority of sources place it between 1635 and 1638.
The National Gallery in London is where it is currently on display.

Since 1736, the picture had been in the hands of the Earl of Derby, who has kept it at Knowsley Hall. The painting, on the other hand, was hardly recognized outside of England, and it was not regarded as a masterpiece.

It only gained in popularity when the National Gallery purchased it in 1964, and it has been utilized several times as an illustration for commercial items, such as record covers, in the decades that have followed.

When Rembrandt’s historical paintings were revalued in the second part of the twentieth century, this painting along with several others have gained considerable importance as part of Rembrandt’s body of work.

9. The Artist in his Studio

Rembrandt painted approximately 100 self-portraits over the course of his life, and The Artist in His Studio is unquestionably one of the most intimate works of art that he ever produced.

It depicts the artist working in a small, bare-bones studio with just the most rudimentary resources at his disposal. A big canvas is seen in the front, and it looks like the artist has taken a step back from it in order to observe it from a distance.

The grandeur of the canvas and easel in the scene is practically in direct contrast to the size of The Artist in His Studio itself.

It is currently be located in the Museum of Fine Arts in Boston.

10. Bathsheba at Her Bath

Bathsheba is a biblical character who is the wife of Uriah, a military figure who was then missing from the scene. While Uriah was out fighting in a battle, King David came across Bathsheba bathing, and upon viewing her, he fell head over heels in love with her and physically dominated her.

The king sends Bathsheba’s husband into war, where he is murdered, in order to cover up his indiscretion and Bathsheba’s pregnancy. As a result of her transformation, she married David and ultimately became the mother of King Solomon, who was considered to be one of the greatest monarchs of ancient history.

While previous painters have depicted the scenario of David spying on Bathsheba, Rembrandt’s portrayal is distinguished by its tight visual focus and sensual vibrancy, which are accomplished using wide, thick brushstrokes and brilliant colors.

Dr. Louis La Caze gave 583 pieces of art to the Louvre in 1869, and this painting is one of the finest. The canvas is referred to be “Rembrandt’s finest picture of a woman.” It has been hailed as “one of the great masterpieces of western art” for its understanding of Bathsheba’s moral quandary, which she faces throughout the picture.