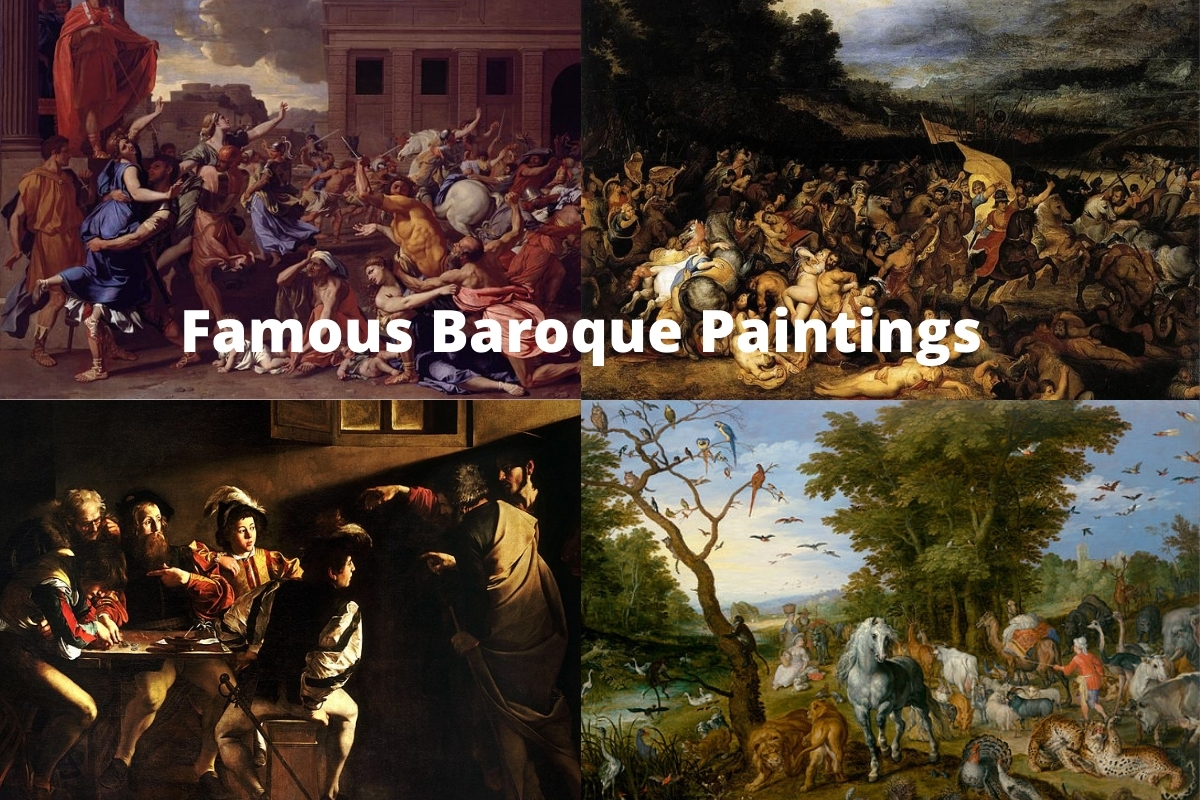 The Baroque movement stems from the period in history during the 16th and 17th centuries when the Catholic church experienced what many view as a revival of artistic inclination that was aimed at portraying some of the most well-known moments of the Christian faith in single works of art.

Instead of movements that came before it, Baroque paintings actually consist of a wide range of distinct styles which comprised what we now see as the Baroque movement as a whole.

These paintings were often characterized by their extreme level of dramatization of certain events while also incorporating a very high level of realistic detail along with stark contrasts between light and darkness.

Diego Velazquez was a true master when it came to painting subjects in a way that captured the personality of each figure represented in the work. Such was the case, according to art historians and critics, in his 1656 work titled Las Meninas. This painting featured the Spanish royal family gathered together in a section of the Royal Alcazar of Madrid.

The painting is widely recognized for its unique characteristics as it portrays the royal family in much of a candid light as many of the individuals included in the painting were well-known throughout the Spanish nobility circles of the day.

In the painting, we see a young girl, Infanta Margaret Theresa, who was the daughter of King Philip IV of Spain being fitted for a dress by some of the servants of the royal court.

Velazquez also decided to include himself in the work as he is depicted as standing behind a canvas, paintbrush in hand. These elements and many others of the work combine to make this one of the most famous Baroque paintings of all time.

Rembrandt van Rijn is highly regarded as one of the most famous baroque artists in history. His work titled The Nightwatch was painted in 1642 and features a tense occasion when Captain Frans Banninck Cocq is seen leading his Dutch soldiers through a city during a military campaign.

The work was originally commissioned by Captain Banninck Cocq himself and was intended to commemorate his valiant soldiers who were successful during the mid-17th century’s battles.

The painting is known for its enormous size, as well as the high level of light and dark used to depict the tense moments of the soldiers carefully marching through the streets, ever-ready for battle.

This particular work is celebrated as one of the greatest paintings of the Dutch Golden Age and is widely considered to be one of Rembrandt’s most famous paintings of his career.

Europe’s Thirty Years War was a time when various military battles ravaged the cities throughout the continent, killing more than 8 million people according to most historians.

Jan Brueghel the Younger painted what many consider today to be one of the most famous Baroque paintings ever created in his work known as Allegory of War.

This painting was created in the 1640’s toward the end of the long war and many of Europe’s civilians had long grown tired of the constant death and destruction wrought by the terrible conflict.

The canvas is strewn about with guns, swords and skulls which are intended, undoubtedly, to symbolize the extreme level of death and destruction the war had brought to the people of Europe during this time.

The animals depicted in the painting, all certain animals representing zodiac symbols, is thought to carry a meaning related to the fact that the war was responsible for destroying anything and everything in its wake.

4. The Abduction of the Sabine Women – Nicolas Poussin

Not all of the most famous Baroque paintings represented religious occasions or current events. Nicolas Poussin’s work titled The Abduction of the Sabine Women was one that focused on the story of the subject that was a well-known Roman mythological tale of the day.

It was created in 1634 and is widely recognized for the high element of drama and vibrant colors throughout the painting.

Poussin’s work depicts a story involving the Sabine women being invited to a festival where the Roman men had intended to forcibly take the women as their own wives.

The painting depicts the very moment in the Roman story when the nation’s leader, Romulus, gave the signal to take the women by raising his cloak.

5. The Calling of St Matthew – Caravaggio

Caravaggio was known throughout art history as one of the most masterful painters who worked in light and darkness in a way that others simply couldn’t match.

His work titled The Calling of St Matthew was one such work that illustrates his incredible command over the stark contrasts of light and dark.

Painted in 1600, Caravaggio’s work features the very moment when Jesus Christ beckoned his future apostle to leave the table of tax collection and follow him in a long journey toward truth and discovery of God’s will for all mankind.

The subject matter of the work is part of the reason why so many consider this painting to be among the most famous Baroque paintings of all time, but it is also due to Caravaggio’s exceptional attention to detail in every aspect of the work.

6. The Education of the Princess – Peter Paul Rubens

Peter Paul Rubens was known as a famous Flemish painter that focused on various scenes of religious or mythological stories that were well-known among the people of his day.

His work titled The Education of the Princess was created sometime between 1622 and 1625 and is known as one of the greatest Baroque masterpieces ever done.

The painting depicts Marie de’ Medici who is helped in her quest for wisdom and knowledge by three mythological gods, Apollo, Hermes, and Athena.

These three gods are said to have instructed her in the most important aspects of her duties as queen and provided her with lessons that were of the utmost importance to her rule.

7. The Entry of the Animals Into Noah’s Ark – Jan Brueghel the Elder

Many of the most notable Baroque painters were known for their close attention to detail when it came to painting various scenes from mythological or religious stories and traditions.

Jan Brueghel the Elder was hailed for his efforts to do so in one single painting known as The Entry of the Animals Into Noah’s Ark.

This work was painted in 1613 and features the incredible story of Noah leading all the world’s animals onto the massive Ark that was built to house them until God’s wrath had subsided across the world and the flood waters subsided.

The painting depicts extremely high attention to detail regarding each animal, down to the smallest bird.

Jan Brueghel was praised for his ability to paint such a beautiful scene of natural wonder as much as the painting was meant to portray the very moment Noah led all the animals onto the Ark.

Peter Paul Rubens is widely hailed as one of the greatest Baroque masters of the art movement.

His series of paintings known as Judgement of Paris are considered some of the greatest of the Baroque era as they feature some of Ruben’s perceptions of the ideal female form represented by goddesses like Minerva, Venus, and Juno.

Painted in 1636, Rubens used a high level of detail in every aspect of the work, which also depicts Paris and Mercury as sitting by on the other side of the canvas.

This particular scene followed the story as it was told according to Lucian’s ‘Judgement of the Goddesses.’

Another version of this painting was commissioned by Philip IV of Spain’s brother Cardinal-Infante Ferdinand of Austria in 1638 and depicts a similar scene with a few minor differences. Nevertheless, this painting is widely recognized as one of the most famous Baroque paintings in history.

9. The Battle of the Amazons – Peter Paul Rubens and Jan Bruegel the Elder

Two of the most legendary Baroque painters in history, Peter Paul Rubens and Jan Bruegel the Elder, combined their efforts to produce one of the most notable masterpieces of the Baroque era that has become known as The Battle of the Amazons.

While this work has been reproduced by other artists, it was these two who truly brought it to light originally, painting the famous work in 1598.

The painting features many similar aspects from Leonardo da Vinci’s masterpiece that is also centered around the Battle of the Amazons. Ruben was known for copying some of the greatest Italian works of all time while putting his own particular flair on each one.

This work is recognized as one of his earliest and most notable paintings that is viewed as more of a tribute to Leonardo himself and his famous style of paintings that Ruben and Jan Bruegel worked to imitate in their own paintings.

10. Landscape with a Calm – Nicolas Poussin

While Nicolas Poussin has already been noted among our list of artists who have created some of the most famous Baroque works in history, it would be a disservice to the era to not mention his painting known as Landscape with a Calm.

Poussin was known as a masterful painter of landscapes and this is widely considered to be the most famous of his career.

Painted in 1650 or 1651, this work features a vast expanse of scenery that depicts a massive structure in the distant countryside. A giant mountain is seen in the distant background of the work while there are sheep and livestock slowly making their way across the edge of a calm lake that is seen in the foreground.

The work is hailed for Poussin’s outstanding use of composition, which depicts several different layers that seem to all draw the viewer’s attention to various parts of the painting the longer one looks at the canvas. While the foreground is a beautiful lakeside view that is perfectly calm, the viewer will notice storm clouds forming in the distance near the mountain’s peak.