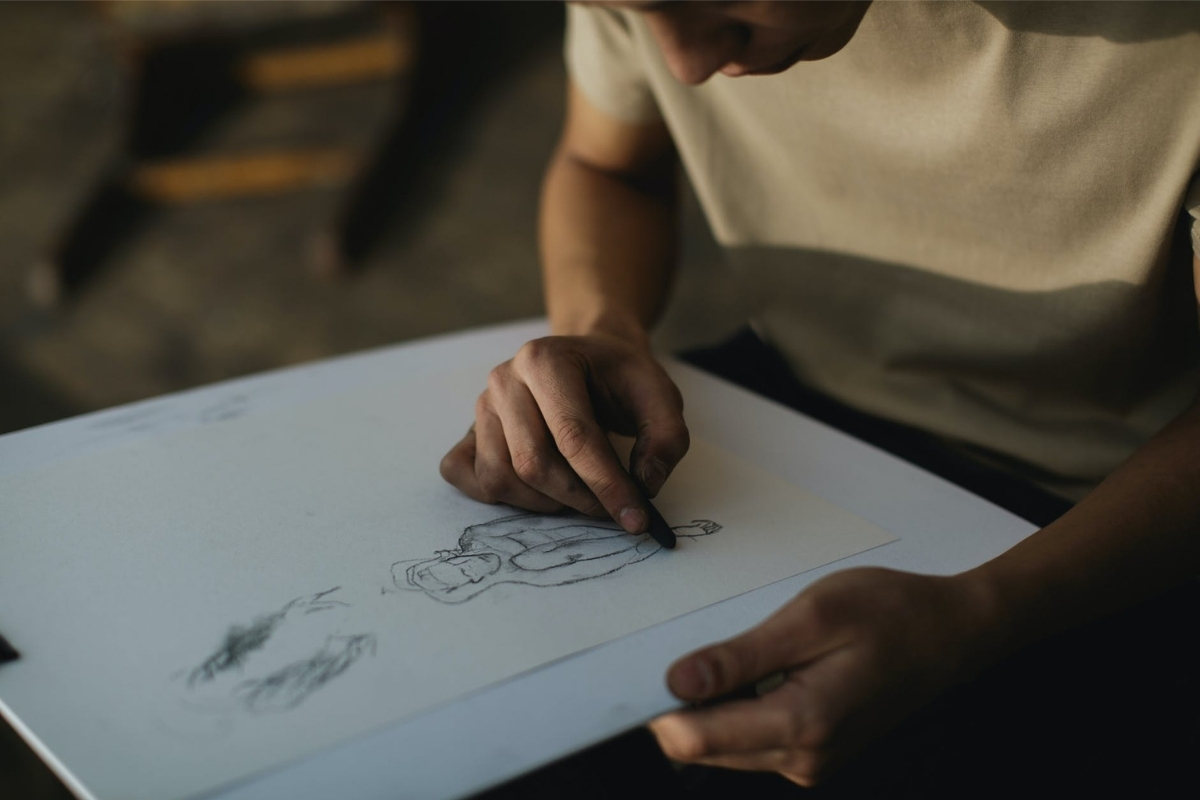 If you are just starting out on your quest to become a better artist you might be confused as to the difference between a sketch vs drawing.

Across the history of art, all throughout the world, there have been a number of great artists who began many of their most famous masterpieces as a simple sketch.

In fact, many of the most prominent painters in the world have used sketching to outline their works and begin creating the forms and perspectives that they would work to fill out with exuberant colors and breathtaking contrast between light and dark.

Other artists have often worked in the realm of sketches, but decided to remain within the confines of pencils, charcoal or any other type of tool that can be used to produce clear, defined edges and shapes on a paper or canvas.

A sketch is a rapid outline done with minimal, lower quality materials to capture the essence of an object, whereas a drawing is much more detailed and is often of a much higher quality than a sketch.

Sketch are generally used a preparatory works for later paintings and the artist may well make many sketches of the same scene, object or person.

For common art enthusiasts with very little or often no education or experience, the concept of drawing vs sketching might at first appear to be the same approach, but accomplished artists know all too well that there is a vast difference between the two.

In this article, we’ll take a closer look into the realm of sketches and drawings and compare the two to determine how the both differ and how they often share many similarities with one another.

Sketching has its roots within the earliest form of art that can be viewed through human history.

It is known that many of the most prominent artists from the very early periods of art across Europe and other areas used sketching as a means to begin a certain work and aid in their overall efforts to capture certain aspects of their field of view, or to use it as a means to practice creating a certain figure or subject matter.

Artists used sketches for a number of different purposes prior to the creation of the actual work itself. Sketching can be done is just about any method using any type of pencil, charcoal, or other medium that is capable of producing clear, defined edges that artists can utilize to create subtle or striking variations in depth.

Throughout history, artists have utilized a wide variety of different materials to create sketches. These materials range from pencils and graphite to ballpoint pens or even pastels.

In most cases, sketches were done as a means to quickly and accurately record something on paper in a way that might help the artist to better recollect the different range of variation in light and darkness, depth of field, or any other facet of any given subject matter.

While many sketching ideas might not be used as a basis for a more detailed work, sketching in itself is a worthy too when learning how to draw as it allows you make lots of quick repetitive practice.

Drawings have been used from the dawn of humankind’s earliest existence, according to most historians and art experts.

Many of the earliest drawings that have been discovered date back thousands of years and are often depicted as cave drawings that capture the important events and concepts or ideas that were taken very seriously be early humans throughout much of the world.

Drawings can be done with a huge variety of different materials, most of which are valued for their ability to allow the artists to craft a two-dimensional figure or subject with clear, defined edges and other elements.

Also Read: Can Anyone Learn to Draw

Many artists throughout history have used the same variations of mediums to produce drawings as they used for sketches. These mostly included graphite, pens and ink, charcoals, and many other kinds of materials.

Going back thousands of years, drawings in much of the developing world have been done on a wide variety of surfaces that allowed the artist to create a straightforward depiction of the form that they intended to portray.

According to many art historians and critics, drawing has been considered the most basic form of human expression and is considered to be one of the purest forms of artistic expression as it allows the artist to create works that were very simple and allowed them to accurately depict the world around them in a way that captured the essence of the subject matter they chose to present.

What’s the Difference Between Sketching and Drawing?

The main difference between a sketch and drawing is that sketches will have less detail, be completed quickly, have simpler forms, and will generally focus on one aspect when compared to a more detailed drawing.

When it comes to determining the main differences between sketches and drawings, art historians and critics mostly agree that sketches tend to be clearly differentiated from drawings in a number of ways.

For most artists, regardless of their skill level, sketches are done in a more rapid, quick time-frame than a drawing might entail.

For most sketches, artists tend to display very little concern for anything in the background of most works, depending on the nature of the subject matter itself.

This is mainly due to the fact that the artist simply wants to capture the subject matter that they plan to solely focus on in their painting or other art medium while largely ignoring the minute, insignificant details of the background.

The shading on most sketches is often done with a series of lines that are often created in varying proximity to one another in order to indicate an area where the darkened shades would be more intense or other methods that depict these lines being farther apart, which indicate less darkness.

These lines are normally used by the sketch artist as a quick and easy means of depicting subtle or significant variations of light and darkness within the subject matter they intend to portray.

Most prominent artists who are known to have created impactful drawings throughout their careers have done so in a manner that brings more focus and attention to every part of the image, from the minute details of the background to the subtle variations and details in the foreground, as well as the main figure itself.

Drawings tend to mostly involve a deeper level of detail and attention on behalf of the artist.

In modern times, drawings can often be as important and as sought-after among prominent artists as most paintings and other types of artwork.

Some of the most prolific drawing artists have used many different variations of colored pencils, charcoals, and other material to create a more fulfilling field of view that features a clear and undeniable subject matter focus in the center of the drawing.

Some of the most notable artists throughout history have been fully capable of creating beautiful, captivating works of art using a simple pen or pencil and paper in the same way the most famous painters have worked on canvas with the most expensive, delicate brushes that can be found.

It is true that some of the most well-known artists in human history have utilized sketches to first depict a series of images or figures which they would later return to in the comfort of their studio and fill out to a greater degree of completion using a wide range of paints and other means.

Regardless of the purpose and intention of the artist, sketches and drawings have played a pivotal role in the world of art since the earliest times in our history.