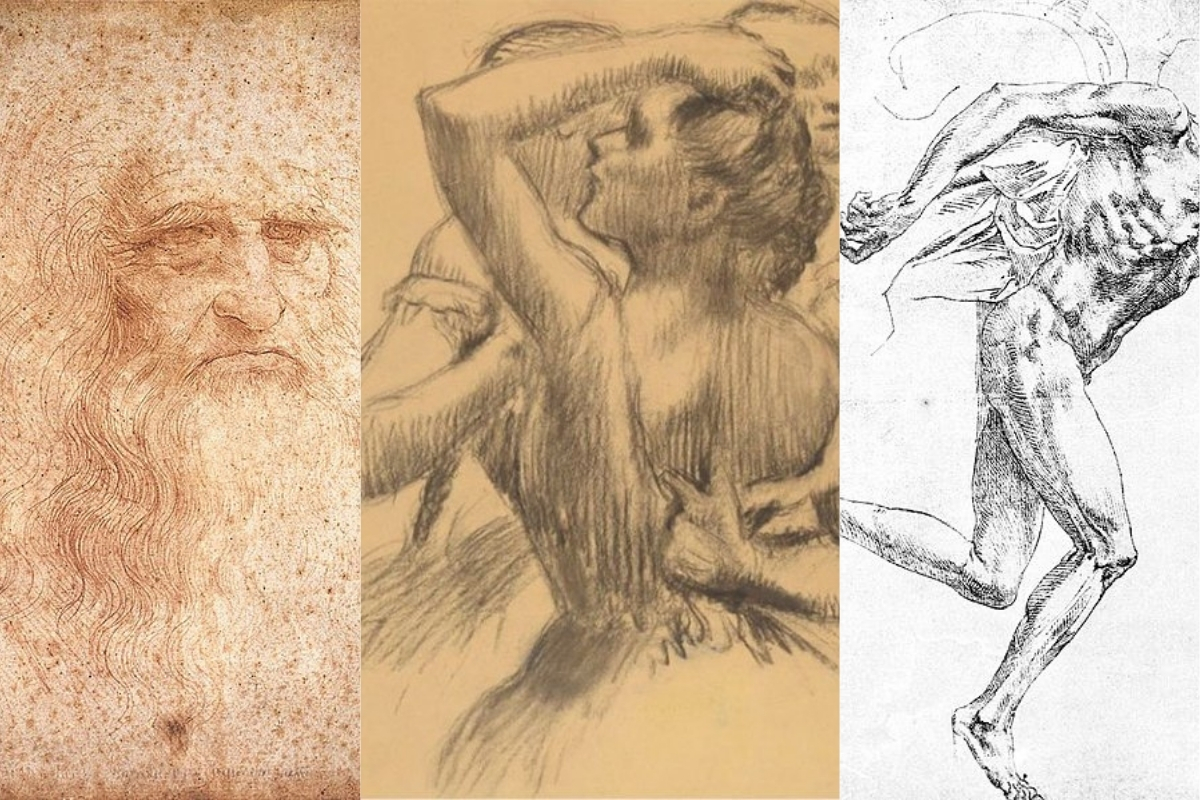 Drawing has been an integral part of human artistic expression for thousands of years. From the earliest cave drawings to modern day artwork that’s done in pencil, drawing has long been closely connected to our cultures and ways of life.

While painting is mostly considered to be the more popular form of artistic expression, drawing is something that even an untrained eye can appreciate.

In fact, some of the greatest painters that have ever lived were also considered to be among the most talented at drawing in history.

In this article, we will observe some of the most famous drawing artists and some of their most notable works, as well as the unique styles and methods they employed to complete their artwork.

Many art historians and critics consider Leonardo da Vinci to be the most prominent figure of the Renaissance era. He was known as a prolific artist in both drawing and painting, and was also an accomplished inventor.

While many of da Vinci’s most famous paintings are among the most easily-recognized in the world, art enthusiasts and historians point to his notebook as one of the most intriguing items from da Vinci’s lifetime.

The notebook is filled with various drawings and sketches of various figures, as well as some of the brilliant inventions and ideas that da Vinci produced during his life. He is known to have started each painting by sketching out most of the work’s details by drawing.

Art historians have noted that the Mona Lisa, when viewed with various technological methods that allowed them to see the marking beneath the paint, was filled with markings that indicated da Vinci spent quite a bit of time drawing out most of the work’s details before he ever took the first brushstroke.

Da Vinci was a masterful artist as it pertained to drawing. His most famous drawings include The Vitruvian Man and others that delve deeper into the physiology and anatomy of humans than anyone else was known to have done at the time.

Albrecht Dürer is arguably the most talented drawers to have ever lived as many of his most famous works far exceed most others in terms of depth and overall detail.

He lived during the 16th century and was known to have completed most of his drawings with silverpoint, which was the most commonly-used method at the time.

Born in Germany, Dürer is known to have established himself as a prominent artist at the young age of 13 when many began to take note of his artistic ability. He lived during the Renaissance era, but is an artist who many consider to be among the most famous artists from the time period.

Dürer was known and respected by prominent figures from the Renaissance era like Raphael and Leonardo da Vinci. While he is widely considered to be one of the most famous drawing artists of all time, he was equally well-known for his printmaking.

Michelangelo Buonarotti is more famously known as ‘Michelangelo’ and is considered to be among one of the three most notable figures from the Renaissance era.

Many art scholars and historians argue whether Michelangelo was a better artist as it pertained to sculpture, painting, or drawing as he was fantastically talented in all three areas of expression.

Like other artists from this time period, many of his most well-known drawings come from his notebook of sketches that, like da Vinci and other Renaissance artists, focused mostly on human anatomy and physiology.

Many of his drawings show the human body in movement, or posed in various ways that highlight the figure’s physique.

Michelangelo’s work in drawing is said to have been a source of inspiration for Leonardo da Vinci as his aim to achieve perfection to the best of his ability was greatly valued by the famous Renaissance man.

Vincent Van Gogh is one of the most celebrated painters in history. His distinct methods of creating works with sweeping, rhythmic brushstrokes and use of vivid, striking color combinations and contrasts are just some of the reasons why so many art critics, historians and scholars view his works as some of the greatest masterpieces of his era.

Van Gogh is known to have spent a considerable amount of time creating sketches and drawings that he would later use as a basis for his paintings.

He used drawings as a foundation to his painted works, but Van Gogh was also known to have turned to drawing as a means to alleviate his distress and other problems caused by the mental illness that plagued him throughout his lifetime.

While his paintings are famous for their colors, Van Gogh’s drawings are celebrated by art historians and critics for their unique depictions of figures and landscapes. The artist, when asked about drawing, is quoted with the response:

“I cannot tell you how happy I am that I have taken up drawing again. I had been thinking about it for a long time, but always considered it impossible and beyond my abilities.”

There are few artists from the 19th century who are regarded as highly as Edgar Degas. The French painter created a litany of works in various mediums like sculpture, paintings, as well as drawings.

His distinct painting style was known as one of the most intriguing of the Impressionist movement. Degas is known to have used drawing as a means to begin many of his prominent paintings.

Degas is known to have thoroughly enjoyed creating drawings and in many cases, he used them to prepare some of his paintings.

While many art scholars know that Degas used drawing sketches as the first stage of creating many of his masterpieces, there are many instances where Degas created drawings simply for the sake of expressing himself.

Despite the fact that Degas’ eyesight would begin to fail him later in life, he continued to draw. Some of his latest works before his death are viewed by most art scholars and historians and are some of his best overall creations.

Peter Paul Rubens is considered by many art historians and critics to be a master at expressing things like color. Composition, and motion in his paintings. The Flemish artist lived during the 17th century and had a reputation for creating some of the most highly regarded paintings of any artist during his lifetime.

He was an expert when it came to producing works that depicted the human physique in a variety of poses or motions, much like some of the well-known Renaissance artists that lived and worked just a century before his birth.

He is considered to be one of the most famous drawing artists despite the fact that he created very few works that were only intended to be drawing.

Many of his sketches were originally intended to be the beginnings of paintings, but some of his most notable drawings from his lifetime were portrayals of farm animals and other natural settings.

The Austrian artist was born in 1890 and was well-known for his ability to create incredible paintings and drawings. Most of Schiele’s more prominent works were focused on human anatomy, mostly nude figures that were often considered controversial by art scholars and critics.

His works were considered to be among the earliest of the Expressionist movement that took place in the 20th century. Schiele developed a style of drawing that was truly unlike any other artist from the same time period.

Many of his most well-known works were highly graphic in nature and were actually looked at with disdain as they were said to be bordering on a pornographic nature.

Of the many different modern artists that could have been included in our list of the most famous drawing artists, none is more well-known than Pablo Picasso. He lived during the late 1800’s and continued to produce some of the most iconic works of art from the early 20th century.

Art scholars and historians have credited Picassso as being one of the most talented artists from the era that featured Cubism and Surrealism.

Picasso had a style that was all his own as he created various paintings and drawings that featured a very unique style of portraying the world around him in a manner that other artists, as well as critics and scholars would find to be strikingly attractive.

He was known to have created a number of drawings that had some elements and characteristics of the famous works from the Renaissance.

Among the most famous artists from the Romanticism era, few were as well-known as Joseph Mallord William Turner. Born in 1775, the English artist is famous for producing a number of works that involved natural landscapes, as well as marine settings with ships and sailing themes.

His father recognized his artistic ability when Turner was very young and the young artist began selling his drawings when he was just 10 years old.

While he is relatively famous for producing works that are highly characteristic of the Romanticism era, Turner’s drawing style and focus far exceeded that of his fellow artists during this lifetime.

Turner’s sketchbooks and drawings are some of the most sought-after by art collectors in modern day.

Eugene Delacroix was known in his lifetime as one of the most prominent French painters who focused on works that are now considered to be from the Romantic and Neoclassical period.

He studied art from a very young age and received high praise from his instructors for his ability to create realistic drawings that featured highly-detailed elements.

Delacroix was a well-traveled artist, visiting many locations throughout Europe, as well as Africa during his youth. These journeys would prove to be extremely influential in the overall style and technique used by Delacroix as the artist produced hundreds of works that depicted life among the cultures that were found in nations like Morocco during the 1830’s.

The artist is known to have had a special affinity for drawing over any other type of artistic expression. Delacroix is quoted as saying: “Color always occupies me, but drawing preoccupies me.”

Henri Matisse is most known for his paintings, but he also worked in printmaking, sculpture, and collage and of course drawing and sketching.

Matisse is recognized as one of the most prominent painters in modern art, alongside Marcel Duchamp and Pablo Picasso.

He works in a variety of media. Examples include sculpture, paper cutouts, and other mediums. He is well known as a painter for the masterpieces he produced.

Henri Matisse is now considered a color master. He was a founder of the Fauvism art movement, which flourished briefly throughout his lifetime.

All of his talent as a painter was grounded in his skill as a draughtsman, his skill with a line, particularly curving lines that look simple are the result of thousands of hours of drawing.

He left behind a huge catalogue of drawings and sketches many of which were the basis for some of his most famous works.