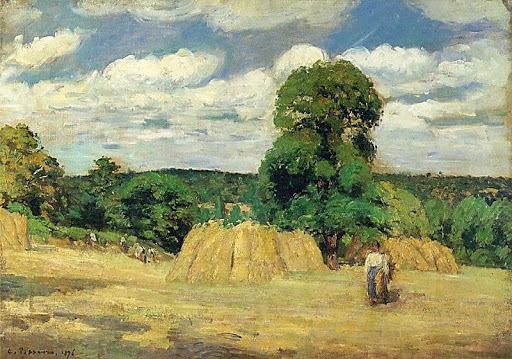 Perhaps the greatest quality of Impressionist art is its ability to accentuate the effects of the passage of time. You cannot help but marvel at the great art pieces of many accomplished artists who managed to capture decades-long of nostalgia in a fleeting moment.

“It is only by drawing often, drawing everything, drawing incessantly, that one fine day you discover to your surprise that you have rendered something in its true character.”

Impressionism is mostly associated with Monet’s landscapes, Van Gogh’s starry sky, and Degas’s sculptures of dancers. What most of us overlook is the less iconic but incredibly moving art of Camille Pissaro.

Let’s dedicate this reading piece to the great Danish-French artist and the father of Impressionism, Camille Pissarro.

Jacob-Abraham-Camille Pissarro was born on a small Caribbean island of St. Thomas in Charlotte-Amalie on 10th July, 1830. At the young age of 12, he was sent away to a boarding school in Paris for five years.

During his early life in Paris, he would visit museums frequently and this is how he was first introduced to the French masters.

Upon his return to St. Thomas, he joined his father’s business to make a living. Soon he became a fast friend of the Danish artist Fritz Melbye who would often encourage him to give more time to his art. In 1852, the pair left the island and moved to Caracas, Venezuela for a few years.

Two years later, Pissarro returned to Paris with his family’s support to gain formal training in art. He came across the artwork of Jean-Baptiste-Camille Corot at the World fair in Paris.

Touched by his work, he started to study art under him, Gustave Courbet and Charles-Francois Daubigny. You can still find hints of their valuable influence in his early art pieces.

Pissaro was an ardent learner of art and he would acquire any art knowledge that the world had to offer. He did not give up formal art education at any point. In fact, he would visit Académie Suisse, an art school started by Charles Suisse frequently.

It was during this time that he met many peers who later went on to become great artists. His circle included Claude Monet, Paul Cézanne and Armand Guillaumin. They shared the same artistic vision of impressionism that helped them inspire each other.

In 1871, Pissarro married his lover, Julie Valley, who later became the mother of his eight children. The family had to leave Paris for London in 1870 due to the Franco-Prussian War.

He lived there for a few years and created some of his greatest works that depict the growth of urban life in villages around London. Upon his return home after the war, he found most of his early work had been destroyed.

In 1873, Pissarro helped found a collective Société anonyme des artistes, which allowed public exhibition of artists who were rejected by the Salon for their innovative ideas and techniques in art.

The first exhibition, in 1874, stands as a defining moment in the history of Impressionism that helped the movement grow.

During the later years of his life, Pissarro was taken over by an interest in printmaking medium and hence joined the Society Painter-Printmakers in 1889. He went on to work for increasing the validity of print and later had some of his prints published in L’Estampe originale.

Camille Pissarro, commonly known as the “Father of Impressionism,” contributed a variety of art work to the movement.

He would paint landscapes around Pontoise and Montmartre as well as the rural and urban life of France. Most of this type of his work is a reflection of his empathy for peasants and laborers and of his revolutionary mindset in politics.

Despite his close terms with significant artists like Degas, Gauguin etc., it seems his influence on fellow Impressionists still goes unappreciated.

However, Pissaro did not limit his work to just that. He went on to experiment with his Neo-Impressionist ideas from 1885 to 1890.

This is around the time when he started experimenting Pointillism, which he referred to as scientific Impressionism. During the twilight of his art life, he returned to the original Impressionism techniques.

Around 1890, Pissarro believed that he had at last achieved the unity in painting that he had sought all his life. He wrote about this accomplishment to his niece, Esther Isaacson:

“I began to understand my sensations and to know what it was that I wanted to do when I was about 40 years old [in the 1870s]—but vaguely. At fifty, that is in 1880, I formulated the idea of unity, without being able to render it. At sixty, I am beginning to see the possibility of rendering it.”

The great artist for the first time in his life achieved what could be regarded as financial stability when his art dealer, Durand-Ruel, held a large exhibition of his life-long work in 1892.

Some of his most famous works include:

The dominant subject matter of his greatest works is rural settings in different effects of light. Like his fellow Impressionists, Pissarro wanted to capture and recreate the stunning effects of light and color on different objects. He depicted different types of human perception of landscapes with the change in light.

The most common subject matter of his work was what came from daily sights, like a hillside washed in sunlight, a street brimming with traffic, or a neighborhood covered in snow.

The later works of Pissarro’s life seem to be more freely painted than those that come from his Neo-Impressionist years.

In these works, he pursued the series technique, where he would paint a series of paintings of the same scene to depict the changing effects of light and weather.

Around the final years of his life, Camille Pissarro had started to gain significant recognition and he was being hailed as the Father of Impressionism.

He might not be the most prolific figure of the movement but his contribution in developing the style and technique makes him one of the key artists of Impressionism.

He passed away in Paris in 1903, leaving behind a lasting legacy that was carried on by his son, Lucien Pissarro, a renowned painter and printmaker.