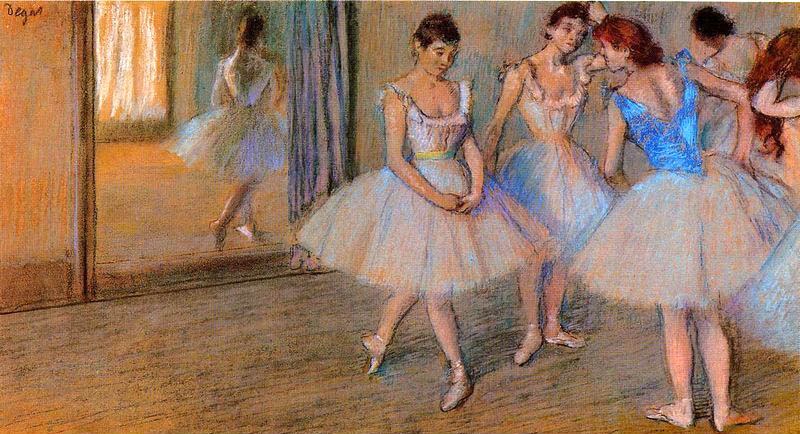 Edgar Degas was perhaps one of the most purely talented of the impressionists of the late nineteen century — he had a feel for movement and composition that was both the product of intuition and a lifetime of study.

During his life, Degas was often overshadowed by the other impressionists. It wasn’t until later that people realized true stature of the artist– and how prolific he really was.

Degas was born in 1834, to a wealthy banking family in Paris. He was fortunate to have a liberal family which supported his education in the arts. After receiving a classical education at Lycee Louis-le-Grand from 1845 to 1852 and studying law for a while, he decided to become a painter.

He studied painting at the École des Beaux-Arts in Paris before concluding that he could gain more through independent study. He began faithfully copying the old masters in the Louvre, and continued to do so many years.

Throughout his life Edgar Degas would make over 700 copies of famous classical paintings. It was in this way that he taught himself to paint in any number of styles, and by 1860 had opened a studio in Paris where he painted historical subjects and portraits that were popular at the time.

By the late 1860s, Degas had met and befriended Edouard Manet and the Novelist Louis Edmond Duranty and began to frequent the Cafe Guerbois where many new impressionist artists met for discussion. It was then that he began to develop his own style, influenced by Japanese prints as well as the impressionists and he would go on to produce  some of the most famous impressionist paintings ever produced.

After a stay in New Orleans in 1872, Degas returned to Paris and opened another studio. He now turned his attention to what would become his muse for the rest of his life, the theater– dancers, acrobats, singers, and the gracefulness of the female form.

At the impressionist exhibits, Degas chose to highlight a wide variety of styles and subjects rather than choose one theme.

Edgar Degas prided himself on his ability to work in any number of styles, from including classical and realist styles, as well as romanticism, and may have somewhat resented being labelled as an impressionist.

Perhaps this was one of the reasons he never caught on with the public in the way many of the others did.

Although Degas participated in seven of the eight impressionist exhibitions, there were a number of things that set him apart from the movement.

He disliked painting directly from nature, preferring the solitude of his studio, and was uninterested in studying natural light and landscapes, more intrigued by people.

He loved the theater and many of his paintings use the dance halls, cafes, or opera house as settings.

Although he painted many race courses and other outdoor subjects, it was the ballet dancers, in both oil and pastel, that degas would ultimately devote himself to. In his later years degas painted many of his dancers from memory– it had become intuitive.

He is universally considered to be one of the most famous pastel artists that has ever lived.

The would go on to become his most famous paintings and the bulk of his work for which he will be remembered for.

The amazing thing for me is how each of these paintings, while portraying similar scenes, convey a new sensitivity and impression. They show a gracefulness and beauty that makes it easy to forget the skill and hard work that must have gone into each painting.

Like many artists, Edgar Degas did not stop working as he grew older and his eyesight began to fail– he simply switched mediums and began working with pastels and sculpture.

His pastels from the 1890s, while not as detailed or technically perfect as his earlier canvasses, make up for it in expressiveness of line and color. His bronze sculpture of a young dancer is lifelike and graceful, but also displays a fragility as she struggles to hold the pose.

For an artist who most of his life was obsessed with technical perfection, there is an expressiveness and freedom with his later work that must have been liberating. “Only when he no longer knows what he is doing does the painter do good things.”