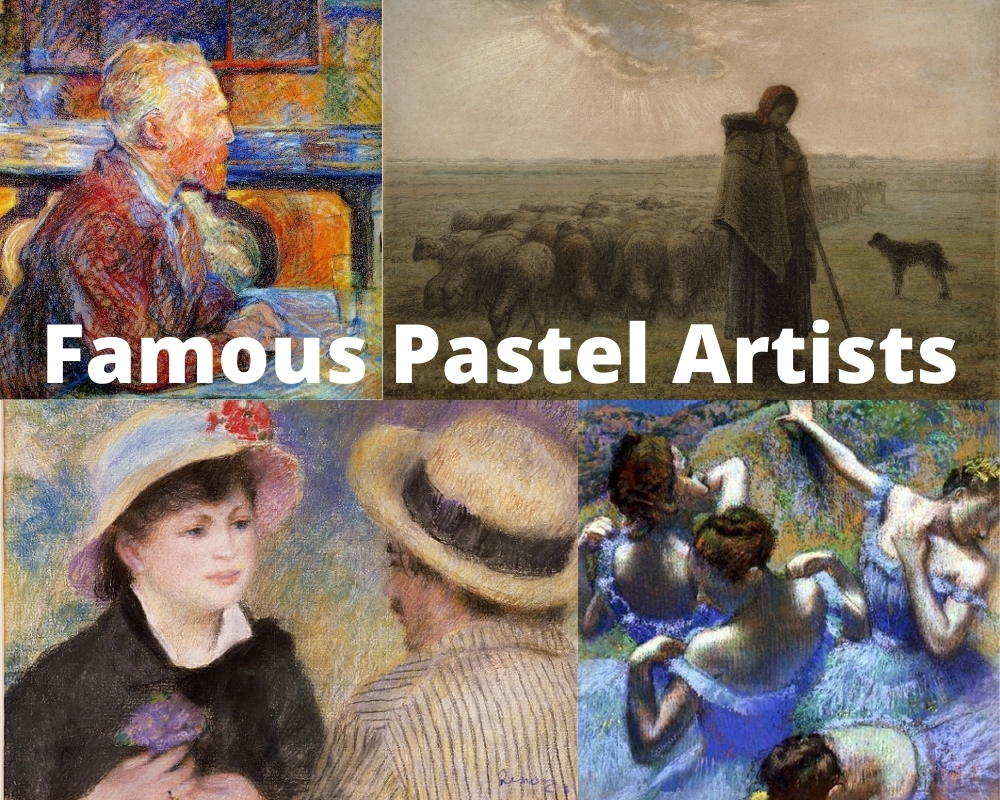 As a medium pastel painting has been somewhat overlooked in the history books.

Without doubt oil paints have dominated for hundreds of years with watercolor and acrylics firmly behind it.

Yet pastel whether it is oil pastel or chalk pastel as a medium has been largely underappreciated.

There are plenty of pastel artists over the past several hundred years that saw the value in the medium, particularly when it comes to it’s blending capabilities.

Pastel gives a beautiful soft texture to any canvas and above all else once the blending technique has been mastered a myriad of colors are available.

Born in 1834, Edgar Degas went on to become a French artist with a decades-long career.

Though he explored a variety of different styles and themes, Degas is best known for his pastel drawings and oil paintings of female dancers and human themes of isolation.

His subjects are often depicted facing away or looking quiet, lost in thought in otherwise social settings.

He defined his art as realism, though he is considered today a founding artist of Impressionism.

In addition to his drawings and paintings, Degas also created a variety of prints and bronze sculptures (many also of dancers).

Outside of his artwork, Degas was a known anti-Semite who became more outspoken in his beliefs with age. He had no formal students or many friendships upon his death in 1917.

However, his work has nevertheless continued to influence numerous other European artists of stature as it did during his lifetime.

Following his artistic training in Paris during his teenage years, Delacroix gained an interest in Romanticism and began painting works inspired by history and classical literature.

He is also known for his frequent use of themes of violence and sensuality, though his subjects often varied between human society and nature.

Delacroix’s travels in 1832 to Spain and North Africa further influenced his work, bringing in exotic locations as well as foreign cultures and histories.

Throughout his career, Delacroix’s work was popular among the general public and was well received by many foreign art authorities. However, it suffered often rampant criticism in French official circles.

In the year before his death in 1862, Delacroix helped found the Société Nationale des Beaux-Arts (the National Society of Fine Arts).

Delacroix completed several pastel paintings of Jesus and these are some of his more famous pieces.

It’s hard to talk about Impressionism without mentioning Pierre-August Renoir. Born in 1841, Renoir began his art career as an apprentice to a porcelain painter.

He went on to spend years struggling as a painter, exploring different classical styles though often getting bored. Then in 1874, he joined forces with several other artists to hold the first Impressionist exhibition, in which he displayed six of his own paintings.

While critical reception of the exhibition as a whole was largely negative, Renoir’s paintings were praised.

He gained further esteem at the second Impressionist exhibition in 1876, while also helping to gain wider recognition for Impressionist themes as a whole.

Renoir painted right up until his death in 1919, even getting to see his work displayed in the Louvre his final year.

With their vibrant, saturated colors and candid appearance of human subjects, Renoir’s works have since influenced many generations of artists.

While many European artists of his day were painting urban landscapes and portraits of city dwellers, Jean-Francois Millet looked elsewhere.

Born in 1814 to French farmers, Millet grew up helping his father out in the fields and went on to use these rural motifs in his later paintings.

He began his art career as a painter of portraits, which drew only modest success. His breakthrough finally came in 1847, when he painted the more ambitious and critically acclaimed Oedipus Taken down from the Tree.

In 1849, Millet painted Harvester, a commission for the French government that lead him to start exploring more farm landscapes and rural scenes. Many of his most acclaimed and commercially successful works followed this.

Though increasingly successful throughout the rest of his life, Millet struggled with health issues and finally succumbed in 1875. He is regarded as a valued source of inspiration for Vincent Van Gogh.

Mary Stevenson Cassatt was an Impressionist painter and print-maker who spent much of her career in France. Unlike most of her colleagues, she was born in 1844 in Allegheny City, Pennsylvania.

Though her family was not supportive of her artistic ambitions, Cassatt nevertheless began studying at the Pennsylvania Academy of Fine Arts (in Philadelphia) in her teens.

However, she grew frustrated with the lack of resources and opportunities available to female students and dropped out to move to Paris in 1865. There, she honed her own craft as a painter of female subjects and their private lives.

She gained a reputation as a prominent figure of the Impressionist movement and was often compared to her close friend Edgar Degas, though they later clashed over his anti-Semitic views.

Cassatt was a lifelong feminist and supporter of equal rights. She stopped painting in 1914 due to failing eyesight and died in 1926.

The name “Pablo Picasso” is still widely recognized today even among non-artistic circles, as are his works in Surrealism.

All of the these periods, combined with Picasso’s neoclassical and Surrealism of the 1920s and onward, solidified his reputation as a global influence.

Along with the likes of Vincent Van Gogh and Paul Gaugin, Henri de Toulouse-Lautrec remains one of the most widely recognized painters of Europe’s Post-Impressionist era.

Born in 1864 to a French aristocratic family, the artist’s early years were not happy ones.

His parents separated after the death of his brother, and he suffered health issues throughout childhood, culminating in his legs ceasing to grow in his early teens (likely due to a genetic disorder).

However, the young Toulouse-Lautrec immersed himself in art as a result. He moved to Paris in 1882 and studied portraits, soon becoming drawn into the Bohemian counter-culture movement.

His commissioned posters for local cabarets and paintings of local life gained him widespread fame, while his struggles with alcoholism took a toll.

He died in 1901 at the age of 36, though the numerous pastel paintings he produced during his short career remain popular and influential today.