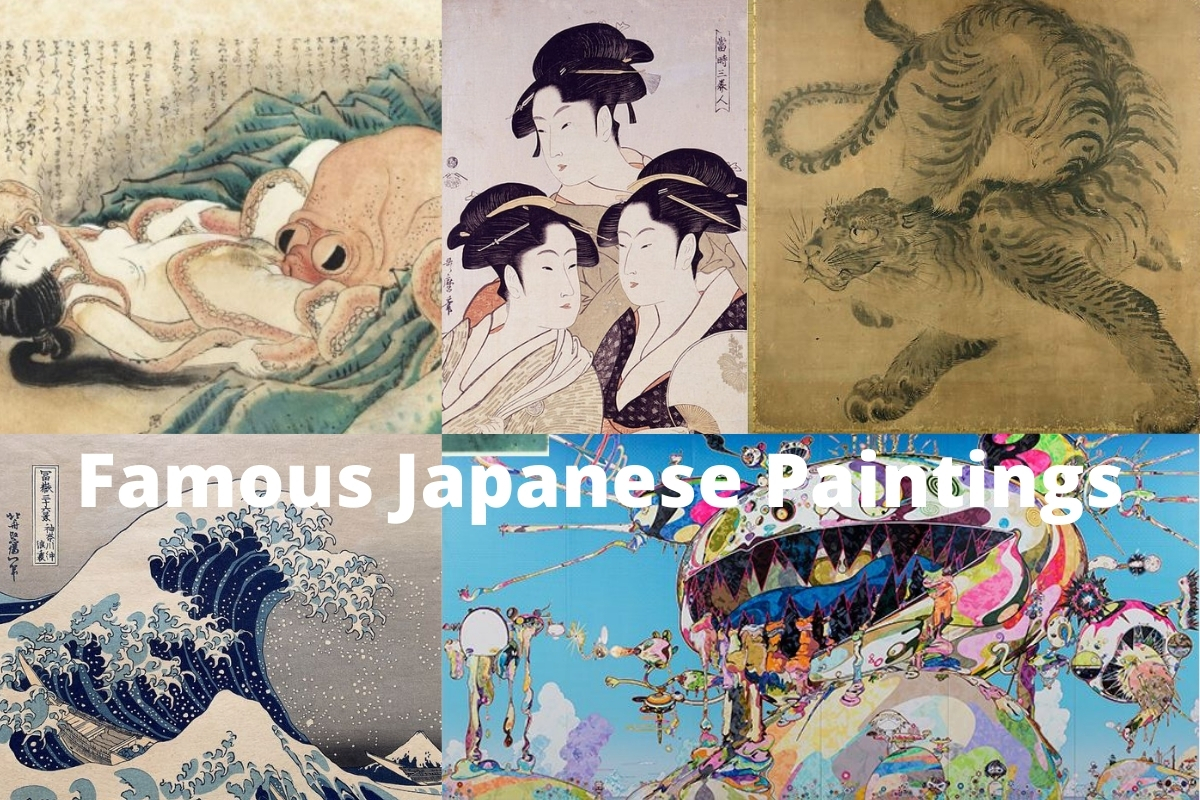 Japanese culture is one that boasts a very rich history which extends well into its artistic influences. The country was for a long time isolated from the rest of the world in many ways, but a bustling, distinctive style of painting still managed to find its way to the rest of the world.

Japan’s isolation caused it to develop a culture all its own in many different ways. Painting is one way that isolation shows through as many famous Japanese artists followed a similar pattern in their styles and methods.

It wasn’t until the 16th century that Japan’s people would be largely exposed to Chinese culture. Later on in the 17th century, Japanese society would seek after styles associated with Western traditions.

Katsushika Hokusai painted this Japanese masterpiece during a time when the country had long been isolated from the rest of the world. The artist painted a series of works which focused on Mount Fuji, as well as the sea.

This particular ocean painting was done sometime between 1830 and 1832 and focuses on the raging seas surrounding the island of Kanagawa, a place that was well-known to sea-faring Japanese fishermen and merchants.

This painting was one in a series titled Thirty-Six Views of Mount Fuji and is unlike many others Hokusai painted in that it focuses more on the rogue wave crashing down on the helpless boats below rather than the famous mountain. In fact, Mount Fuji is only slightly visible and almost appears to be a lesser wave in the distant background of the painting.

Many art critics and enthusiasts of the day commented on this work, noting that the perspective of the painting makes the legendary mountain seem small and insignificant when compared to the gigantic wave.

Kawanabe Kyosai was one of the most famous Japanese painters. He was well known during his lifetime as an artist and developed a reputation as a trouble-maker since he would regularly paint caricatures of political leaders engaging in various comedic scenes. The son of a Samurai, Kyosai studied the art of painting from a very young age.

He painted the work known as Tiger in 1878 and it has long been one of the most iconic Japanese paintings in history. His style of painting was largely influenced by Tohaku and later would become the most prominent Japanese artist in the 19th century.

This particular work was done in watercolor and ink, which blends together in a distinctive manner that seems to accurately portray a great level of detail on the animal. This, like most of Kyosai’s works, features a tiger that’s in an actionable pose as if it’s about to pounce on its prey.

Fujishima Takeji was a famous artist that was well-known throughout Japan during his lifetime. He was commissioned in 1928 to paint a series of works that would adorn the Showa Emperor’s study hall.

The artist made the decision to paint a scene depicting a sunrise in an effort to portray the Emperor’s ascension to power.

He spent quite a few years traveling and searching for perfect sunrises throughout different parts of Japan, as well as Taiwan, which was a Japanese colony at the time. He finally painted Sunrise over the Eastern Sea in 1932.

The work has long been hailed as a masterpiece among Japanese artwork and is known for its curious depiction of the horizon as it gently meets the calm sea below. The sailboat is the only object that isn’t part of the scene that naturally belongs in the painting.

One of the earliest artists on our list of the most famous Japanese paintings in history is Sesshū Tōyō. Born into a Samurai family, Tōyō would go on to study in becoming a Buddhist priest, but was later encouraged to study the visual arts after showing an inclination for drawing and painting in his early years.

He painted Sansui Chokan (Long Scroll of Landscapes) in 1486 in the final years of his life. Tōyō is said to have been inspired by his travels to China during his early career and was especially stricken with the natural scenes depicted in many different Chinese works.

Long Scroll of Landscapes is a work that is 15 meters in length and depicts the four seasons equally. The painting has heavy undertones of Chinese artworks during the period, but has long stood as a famous work of art in Japanese culture.

5. Painting of a Cypress – Kano Eitoku

Kano Eitoku lived in the 16th century and was widely known for his ability to capture natural scenes in his paintings. His work titled Painting of a Cypress is one that has long been hailed as one of the most famous Japanese paintings in history as it is impressive in both size and style.

Eitoku painted the work on several jointed panels that are mostly comprised of a Japanese type of paper that was popular during the 16th century. The work is believed to have been painted in 1590 and features a sprawling cypress tree that has spread its roots far into the ground of a hillside.

Many art enthusiasts and critics consider the painting a true Japanese masterpiece as it depicts an extensive level of detail that took a considerable amount of time for the artist to achieve.

Among the most famous Japanese painters in history is Kitagawa Utamaro. The artist was well known for his depictions of long, slender women who were painted in ways that truly accentuate the female form.

His most famous work is a series, Ten Studies in Female Physiognomy, A Collection of Reigning Beauties, Great Love Themes of Classical Poetry, which is believed to have been painted around 1800.

Utamaro captured women from many different backgrounds and societal classes. His paintings portray them in various activities that were mostly considered everyday chores or actions.

The series is one that is iconic throughout Japanese culture and Utamaro’s depiction of women has long been representative of the classical view of Japanese women.

Modern Japanese art has carved a path toward greatness in its own right when compared to the classical Japanese styles that were developed centuries ago. In 2016, Takashi Murakami’s painting titled A.K.A. Gero Tan: Noah’s Ark emerged as a work that quickly gained popularity for the artist’s uniquely creative style and use of composition.

The painting seems to blend many different genres of painting into one work that is as colorful as it is curious. Art lovers and critics have deemed it a work that somehow manages to capture much of modern Japanese culture’s affinity to anime-style art.

The painting was inspired by a fictional creature from Japanese folklore, Kitaro, who is said to possess supernatural powers. Murakami drew inspiration for the painting from images he remembers from his childhood which come from a manga series dated to around 1960.

One of the earliest works of Japanese paintings that has long been viewed as a classical masterpiece is Tensho Shubun’s painting titled Reading in a Bamboo Grove. Painted in 1446, this work features a simple, elegant scene of an individual sitting along a hillside overlooking a bamboo grove.

Such groves are commonplace in Japan and the bamboo tree has been viewed for centuries as a symbol of the country and its culture. The artist was heavily influenced by Japanese landscape painters Xia Gui and Ma Yuan, who commonly painted scenes that depicted bamboo groves and hillsides similar to the scene depicted in this work.

This particular work was done in a peculiar style of Japanese ink painting that would later grow in popularity and become one of the more prominent painting methods in the culture.

9. The Dream of the Fisherman’s Wife – Katsushika Hokusai

This scene and style has been recreated many times through a number of mediums and remains a controversial form of expression that is not well-received in Western culture.

Yayoi Kusama is one of the most unique artists of the modern era in Japanese painting and her works largely focus on pumpkins in many different forms.

When Kusama was only 10 years old, she suffered from a bizarre bout of hallucinations in which she pictured dotted and warped pumpkins that were arranged in various ways.

Later in life, she would attempt to capture those visions with striking works that bordered on optical illusion.

Her paintings are some of the most famous works in Japanese culture and have been exhibited across the world. She has done a number of gigantic paintings that center on pumpkins that are dotted with large black polka-dots, which she refers to as “infinity nets.”

Much of her work is said to have stemmed from many years during her childhood that were filled with sexual and other types of trauma. Since 1980, she has been hailed as one of the most iconic Japanese artists and her work spans mediums that include painting, sculpture, written works, and more.