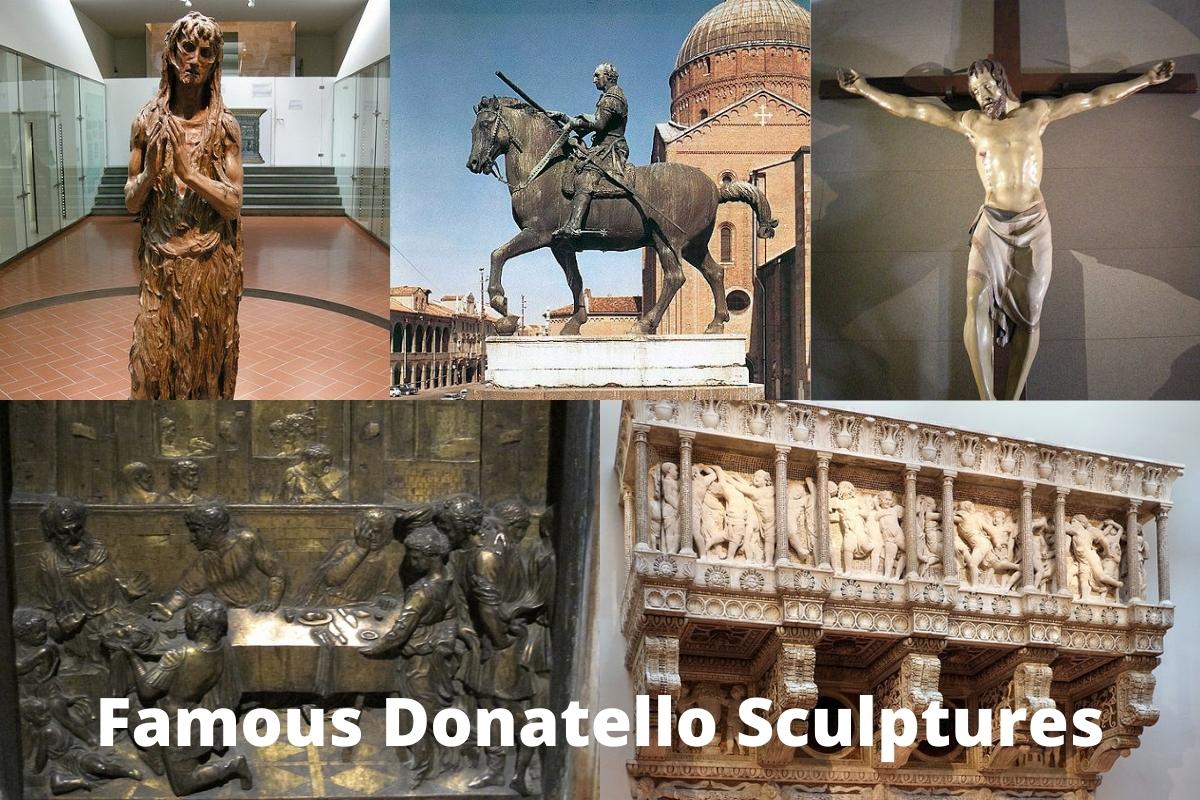 Donato di Niccolò di Betto Bardi is recognized as one of the most prolific artists from the Italian Renaissance era. He’s often known simply as Donatello and is regarded as one of the most talented sculptors to have ever lived. Many of his works are considered to be among the greatest masterpieces from history.

Donatello’s handiwork was often characterized by his incredible ability to portray vivid detail in each of his sculptures. The effort and concentration that was required to produce such masterful sculptures has rarely been seen since his lifetime.

In this article, we will examine 10 of the most famous Donatello sculptures and works from his career.

Some of these works are among the more iconic pieces of the Italian Renaissance while others are lesser-known sculptures that are still breathtaking and impressive in their own right.

Donatello’s David is considered by many art critics and historians to be one of his greatest masterpieces. Unlike Michaelangelo’s David, this sculpture depicts a vastly different portrayal of the Biblical hero that was credited with leading the Israelite people for many years.

The title David is actually given to two separate statutes that were done by Donatello.

The first of these sculptures was carved out of marble some time during the year 1408, according to most historians. This depiction of David presents the Bible hero clothed in what might have been more realistic apparel for the time period.

This sculpture was done by Donatello when the artist was in his twenties and had yet to truly break out as the widely celebrated figure that he would later become.

The year in which the latter statue of David was finished is unknown, but many scholars estimate that it was likely completed sometime around the 1440’s. This bronze portrayal of the famous Biblical figure is the more famous of the two, mostly because of the striking nature of the statue itself.

Donatello depicted David in the nude while wearing a large feathered hat, which was the style in Italy at the time. The statue is also seen holding a sword and standing atop a suit of armor.

One of the most highly-revered statues done by Donatello is known as the Equestrian Statue of Gattamelata. This iconic work depicts a military leader mounted on horseback and has become one of the more celebrated political sculptures done by the artist.

The figure that’s mounted atop the horse is Erasmo da Narni, who was a prominent leader of mercenary forces during the early 1400’s for various papal leaders and other rulers in and around Italy.

The title given to such mercenary forces was condottiero and was a popular and prestigious distinction during the Middle Ages.

Erasmo da Narni was known more commonly by his nickname, Gattamelata, which strangely meant Honeyed Cat. The statue was completed in 1453 and, at the time, it was not allowed for artists to create equestrian statues of anyone who wasn’t a ruler, which Gattamelata was not.

It is likely that there had to be special approval granted by the local Venetian Senate for the statue to be publicly displayed.

During the latter portion of Donatello’s career, he began to experiment more with other mediums, such as bronze and wood to create sculptures and statues. One of the works that he produced during this time was a famous depiction of the Biblical figure Mary Magdalene, who was a close follower of Jesus shortly before his execution.

Donatello carved this figure out of wood and it remains as one of the most iconic wooden statues ever created to this very day.

The sculpture was believed to have been finished around 1455, not long after the artist had completed his Equestrian Statue of Gattamelata.

This depiction of Mary Magdalene is gripping for most viewers as she is shown to be very frail, wearing tattered clothing.

The hands of Mary Magdalene are clasped together in front of her chest in a sign of penance for her sins.

Most historians believe the work was likely commissioned by the Baptistery of Florence and many people at the time remarked that it was one of the most realistically-detailed statues they had ever seen.

One of Donatello’s more prominent early works was a depiction of the famous Christian figure from the early centuries A.D. known as Saint George.

There are a number of legends and stories surrounding the figure that depicts George as slaying dragons and rescuing princesses, but he is most famous for his refusal to recant his Christian faith after being captured by Persian forces.

By the year Donatello was born, Saint George had become a prominent figure in the Christian traditions and was often pointed to as a symbol of valor and perseverance in the face of religious adversity. Donatello created the marble statue that would become known as Saint George in 1415.

The figure of Saint George was sculpted by Donatello as being a muscular young man that was adorned in clothing and armor that was characteristic for Christian Crusader soldiers to wear. Most scholars who have studied the statue believe that the hand of Saint George once clutched some type of sword that has since been lost to history.

5. The Feast of Herod

Many of Donatello’s most famous sculptures were done ‘in the round,’ but there are a few masterful works that were done in relief. One such sculpture is known as The Feast of Herod and is a depiction of the well-known Biblical story of the feast that was organized by the evil King Herod.

During this occasion, according to the Bible account, Herod’s daughter, Salome, demanded the head of John the Baptist, which King Herod reluctantly agreed to provide.

Donatello’s relief sculpture portrays the moment when John the Baptist is being beheaded. Most historians and scholars believe the sculpture was done in 1427 and was one of the earliest relief works done by Donatello.

In the sculpture, we see an executioner presenting the head of John the Baptist, which he is seen holding up to show King Herod.

Art historians record that many point to one statue as being Donatello’s favorite work. This incredibly-detailed statue is said to be a depiction of the famous Bible prophet Habakkuk, who very little is known about from scripture.

The statue was carved out of marble and is praised as one of the artist’s most highly-celebrated works.

The name given to this sculpture by many is the Statue of the Prophet Habakkuk, but it’s also known by the name, Zuccone, which in Italian means idiot.

It is recorded that Donatello poured many hours of work into this statue in order to perfect every minute detail about the figure of the prophet Habakkuk.

Anyone who has viewed the work in person can see the extreme level of detail that this statue was created with.

According to some historians, Donatello is said to have shouted at the statue while carving it, imploring it to speak and referring to it as an idiot or ‘Zuccone’ for not doing so.

This is how the statue received its comical nickname and, if true, provides us with a glimpse into Donatello’s mindset regarding his work and the high standard that he held himself to while sculpting any work.

Donatello created another statue of a prominent Biblical figure when he sculpted a work for the linen weaver’s guild in Florence. This sculpture would later become the most famous three-dimensional depiction of Saint Mark, who was one of Christ’s twelve apostles who also penned one of the more prominent books of the New Testament.

The artist produced the statue sometime between 1410 and 1414 during the early portion of his career. Like any other work from Donatello, this one also presents a very high level of realism that is undeniable to anyone who views the statue.

Shortly after it was completed, however, the leaders of the linen weaver’s guild are said to have been unsatisfied with Donatello’s work, claiming that some aspects of the statue were not properly proportioned.

According to a book written by Vasari, Donatello promised to make alterations to the statue, but merely covered the work with a cloth and placed it into the niche where it had been planned to be displayed.

After not touching the sculpture for a span of two weeks, Donatello once again presented the work, which this time was approved and praised for its quality.

One of the earliest surviving works from Donatello is titled Santa Croce Crucifix. This work was created by the artist during his early life while he was still studying the art of sculpture in Rome.

It’s a depiction of a crucified Christ hanging on a cross, his arms outstretched and nails driven through his hands and feet.

It was to be displayed at the Basilica di Santa Croce in Florence and is believed to have been completed in 1408. Donatello is said to have been captivated and inspired by a work that was done by his close friend, Filippo Brunelleschi.

This work also depicted a crucified figure and it spurred Donatello to create his own version of Jesus on the cross.

The artist carved this piece from polychrome wood material and it still resides in the Cappella Bardi di Vernio today.

Donatello’s version of the work would later serve as a section where the choir stood and was nicknamed ‘the singing gallery.’

The official title given to this sculpture is Cantoria and was finally completed in the same year it was commissioned.

This work would later be recognized as having more intricate detail than della Robbia’s version, but it still was not quite as elaborate as other works done by Donatello.

Donatello’s sculpture depicting the famous Biblical story of Judith slaying Holofernes is arguably one of the most iconic artistic portrayals of this story that’s ever been done. It was one of the last great sculptures done by the artist and was completed some time around the year 1464 A.D.

The statue portrays the Old Testament story which tells of the killing of the Assyrian General Holofernes at the hands of Judith. This scene is one that has been portrayed many times by other artists, including the famous painter, Caravaggio.

Like so many other works done by Donatello, this would also be highly-praised for its incredible level of detail.