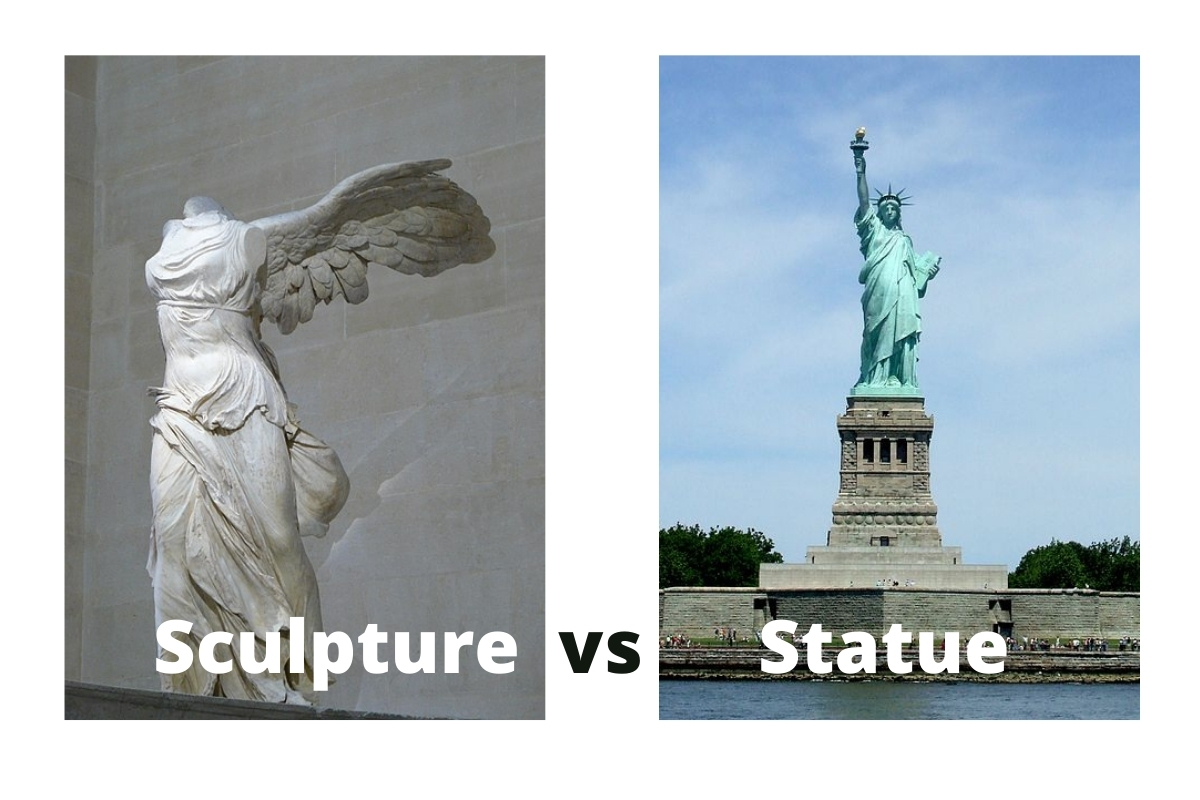 Sculpting has been a method artists have used throughout history to create spectacular works that portray real or imagined ideas and beings. Ancient societies clearly valued the physical representations that sculptures and statues stood for while some even worshiped these structures as deities in some cases.

There are countless numbers of works that have been created, but one must consider a number of factors and characteristics in order to determine whether a work is a sculpture or a statue.

Casual art observers may not know there is even a difference between sculptures vs statues, but there are certain indicators as to whether a particular work is one or the other.

In this article, we will explore the major differences between sculptures and statues and consider the defining characteristics of both to help you gain a deeper understanding on the subject.

What is a Sculpture?

A sculpture is a work of art that’s created through the delicate process of sculpting. The artist must work to carve the figure out of whatever type of stone or other material he or she is working with using a variety of methods.

Many sculptures throughout history have used the same basic tools to accomplish the task at hand while most modern sculptors commonly use different types of machines.

These methods, many centuries ago, included simple tools like a hammer and chisel, as well as a few other tools that helped the artist to carve away large or small chunks of material depending on what they intended the finished product to resemble.

Some of these tools are used for carving while others might be intended for chiseling away sections of material with greater or lesser degrees.

There are other sculptures that can be made out of different types of material instead of stone. Many modern artists have produced a variety of works that are made out of everything from steel or aluminum to plastics or other things that can be shaped and manipulated in such a way as to create the artwork the artist intends to produce.

Sculptures can be made to depict virtually anything the artist wants to show their viewers, whether it’s a lifelike representation of human beings, animals, or other figures. A sculpture can also be more abstract and created in such a way as to look very distorted or even unreal.

Some artists choose to create sculptures out of materials that are ironic or even metaphoric in some instances. These sculpted works can be any size from just a few centimeters to some that are as big as a house.

When considering the difference between sculptures vs statues, the main thing you should consider in relation to sculptures is that they can vary drastically in terms of size, shape, material, as well as what the artist intends for the sculpture to look like.

There are always elements of creativity in sculpting and a true sculpture is not always made to resemble any certain object or figure.

What is a Statue?

A statue might, on the surface, seem to be virtually the same as a sculpture. However, there is a clear distinction between the two that artists are well aware of and it’s also something you should consider when viewing different works that might be deemed a sculpture or a statue.

This can be somewhat confusing since some statues are actually sculptures in the sense that they have been crafted from a single piece of stone or other material.

Unlike a sculpture, a statue can be created using a variety of different methods that might include casting, carving, molding, or even sculpting. Most statues are life-like in terms of size as many human figures are usually depicted as being accurately formed to be life-sized or slightly bigger in some cases.

What sets a work apart as a statue is the fact that it is an accurate representation of a real or imagined figure. Statues do often have some artistic value, but they are mostly intended to represent some prominent human figure or even important animals, gods or goddesses, or others.

Statues are mostly intended to memorialize or commemorate a person, animal or other figure that is known for some type of achievement. Many of the world’s oldest cities have statues of noteworthy leaders that include societal, religious, military, political, and other figures.

The purpose of a statue is not to serve as a work of art, but to instead celebrate such important people and other beings from history.

Differences between Sculptures and Statues

Sculptures can sometimes be works that don’t actually look like or resemble anything in terms of our physical reality, but are instead representations of what the artist has in their own creative mind.

A sculpture’s purpose is based on artistic value more than anything else. This is why many modern sculptures sometimes portray unusual or seemingly unreal shapes and figures.

These works are not always easily understood and can sometimes be viewed with displeasure by those who are unappreciative of the purpose of the artwork itself, or the concept that the artist sought to communicate through the sculpture.

The purpose of a statue, however, is vastly different in the sense that it is always meant to commemorate some figure from the past, or even religious figures that are part of a belief system.

There are countless numbers of statues placed all over the world that are meant to celebrate and remember prominent religious icons and deities from various forms of faith.

In many cases, such religious statues are massive in size and often tower above any other surrounding structures for the purpose of showing the importance of the figure or the deity the statue represents. A statue will also have heavy cultural connotations based on when and where the artist is from.

Statues are often made to look as realistic as possible in order to best celebrate the actual person they represent. This intense level of realism is part of what makes the statue memorable to anyone who views it regardless of whether the work is made to resemble an actual person, or a religious deity, animal, or mythological creature.

It is commonly believed that a statue must be a certain size in order to properly celebrate the figure that it is made to represent. Statues are often created to be life-sized works that are as close to the figure’s actual size, but they can also be created to be much larger as well.

Some of the world’s most famous sculptures also happen to be works that can be considered to be statues as well, depending on the subject and the nature of the sculpture itself.

There are many works strewn throughout the world’s museums that are regarded as being among the most famous sculptures ever created. These works help us gain a better understanding of what a sculpture actually is and how it is often different from a statue.

Many sculptures that are considered to be the most famous in the world are often made to be incredibly large so that they stand out from any other man-made or even natural structure around it.

The Great Sphinx of Giza is considered to be one of the largest and most famous sculptures ever made. This work has stood for thousands of years and is one of the most mysterious sculptures ever created as historians and scholars are still not fully certain as to the exact purpose or intent the creators of the Sphinx had for this particular work.

Michelangelo is regarded as one of the most prolific sculptors and painters of the Italian Renaissance era that took place from the 15th to the 17th century in Italy and parts of Europe.

One of his greatest and most defining works is known simply as David and is said to have been completed in 1504. This sculpture is a massive representation of the famed Biblical figure from the Old Testament.

Standing at just over 17 feet tall, Michelangelo’s David is chiseled out of marble and polished to a degree that gives it an incredible level of realistic detail in the skin, hair and body parts of the form of David.

Since the work is intended to be a representation of the famous Biblical figure of David, it is both a sculpture and a statue at the same time.

It was erected in 2006 and has since become a massive tourist attraction that draws millions of visitors each year. This sculpture is extremely large and has a mirror-like reflective outer layer that captivates those who visit the location.

One of the most famous statues in the world is the Statue of Liberty, which is located on New York’s Liberty Island. The statue is made of copper and stands at an astounding 151 feet tall.

It was dedicated in 1886 as a gift from France to the United States that was meant to celebrate the concept of Liberty. The idea of Liberty is represented in this statue as ‘Lady Liberty’ who is seen holding a torch, as well as a tablet.

It was also a famous French artist who created another one of the world’s most famous statues that stands overlooking the city of Rio de Janeiro, Brazil. Known as Christ the Redeemer, this statue represents Jesus Christ and took more than a decade before it was finished in 1931.

The statue stands as one of the most famous landmarks in the world and is an incredible 125 feet tall, but looks to be much larger since it is placed on a high rocky outcropping overlooking the city.

Another larger-than-life statue that is revered as one of the world’s most well-known works is known as The Thinker. This unique statue sits in Paris, France outside the Musée Rodin.

The Thinker is another work that’s considered to be both a statue and a sculpture since it is made of bronze and was originally made to represent the figure from Dante’s Divine Comedy.

Although many works throughout the world are considered to be both a statue and a sculpture, many others are vastly different and represent a plethora of ideas and representations that make each of them unique. The basic difference between statues and sculptures is the overall purpose with which they were created.

You can always tell a statue as being a work that is an accurate representation of a person or being while a sculpture is a work that has been done with a greater sense of creativity. Both types of artwork are meant to appeal to the viewer’s mind in different ways and each one has its own intrinsic meaning.