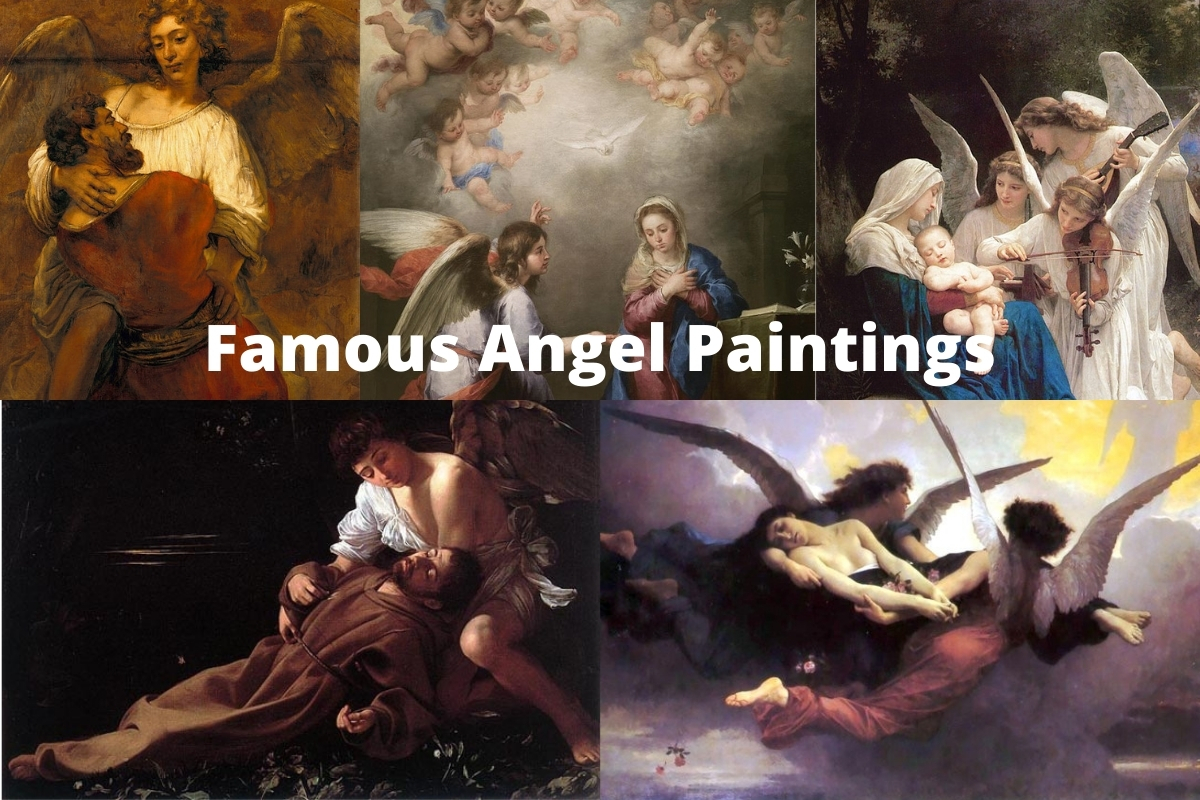 Some of the greatest paintings in history have featured the subject of angels. During the Italian Renaissance period, many of the most well-known artists regularly incorporated depictions of angels into their masterpieces. Since that time, artists and art lovers alike have held a strong fascination with the heavenly beings.

Artists like Michelangelo, Raphael and others painted works that centered around some of the most famous stories in the Judeo-Christian Bible that were focused on the subject angels or had angels somewhere on the canvas.

Many artists have rendered their own interpretation of these angelic beings while others have tried to stay closely aligned to the brief descriptions we find in the Bible and other ancient texts that describe the appearance of angels.

Regardless of the purpose or intent of the work, paintings that feature angels are some of the most iconic works in human history. Here are the ten most famous angel paintings ever created.

Caravaggio was a master when it came to paintings of religious themes. The Italian-born artist’s works can often be recognized for the high level of contrast between light and dark in his depictions.

His 1595 painting titled St. Francis of Assisi in Ecstasy portrays Saint Francis of Assisi being cradled in the arms of an angel at the very moment he experienced a phenomenon known as Stigmata, meaning that he received wounds in his hands and feet that were representative of Christ’s crucifixion.

Caravaggio is thought to have painted this work while he stayed in Palazzo Madama and worked as “Del Monte’s painter” as he often referred to himself.

The painting itself is a true masterpiece as it features highly realistic depictions of the human form of Saint Francis while also featuring Caravaggio’s trademark contrast between high levels of light and darkness.

The angel portrayed in the painting is said to be a six-winged seraphim, a description taken from the Old Testament writings of angels. The story of Saint Francis’ encounter was told by Brother Leo and notes that Francis experienced what seemed like a moment of indescribable ecstasy.

The story of the Apostle Paul’s encounter with Christ is one of the most famous of the New Testament. Michelangelo sought to recreate the moment when Christ revealed himself to Saul, who would later be known as Paul, and his fellow travelers on the road to the city of Damascus. This work was painted sometime between 1542 and 1545 in the Pauline Chapel of the Vatican.

The painting features many more characters that are not noted in the Biblical account of the story as Michelangelo included numerous depictions of angels surrounding Christ as he is seen hovering above Paul.

The angels in the painting are apparently invisible to the men who accompanied Saul on his journey because they are seen as being fixated on the intense light of Christ’s appearance. This work is considered one of the most famous religious paintings of all time for its depiction of the event and the many figures Michelangelo chose to incorporate into the giant mural.

William-Adolphe Bouguereau was famous for his lifelike portrayal of the human form in his works from the late 19th century. Few of his paintings drew as much praise, however, as his work titled A Soul Brought to Heaven, which was created in 1878.

While Bouguereau’s name is not often listed among the greatest painters from his era, he enjoyed high praise from the likes of Edgar Degas and Claude Monet.

This painting is one of the more famous works related to angels as it features two of the heavenly beings flying toward a distant light which one can only assume to be heaven. The woman being taken into the clouds is apparently unaware that she is being carried by the angels, who are both looking towards the winged silhouette in the distance.

Raphael is named among some of the most notable artists in human history and was possibly the most famous behind Leonardo da Vinci, according to most art historians. His work known as The Sistine Madonna is one of the more iconic paintings that center around angels and divine figures as it features a Madonna, or representation of the Virgin Mary along with other Biblical characters.

The painting was done in 1512 after being commissioned by Pope Julius II. It portrays the Virgin Mary cradling the baby Jesus in her arms as she walks on a cloud. Next to her is Saint Sixtus and Saint Barbara, but the two figures that are perhaps most famous are the childlike cherubs below her.

These angelic beings are depicted as being perfectly innocent and have a somewhat curious expression as they gaze upward toward Mary and baby Jesus.

Petrus Christus created one of the most famous angel paintings in his work known as The Annunciation. Painted in 1450, the artist depicts the Virgin Mary as meeting the Angel Gabriel at the door of a church.

According to the title and Petrus Christus’ portrayal, it was at this moment when the angel told Mary that she would become pregnant and bear the child that would be the Messiah.

The painting is an especially peculiar one that incorporates angels as it presents this scene from a birds-eye view, possibly indicating that the viewer is experiencing the same view as either God or Christ himself. The work is also famous for the artist’s extremely high level of detail in every minute aspect, including the plant life in the background.

The Biblical story of Jacob wrestling with an angel of God is one that has been portrayed many times throughout history. Few paintings on the subject are as well-known as Dutch painter Rembrandt Van Rijn’s work titled Jacob Wrestling with the Angel. This work was created in 1659 and has remained as one of the most famous paintings ever done by Rembrandt.

Instead of featuring the angel locked in a close battle with the human Jacob, Rembrandt seems to acknowledge the angel’s divine power as the angel is seen in a calm expression while Jacob is struggling with all his might. The angel actually appears to be holding Jacob in a way that one might hold a baby, with gentle care not to injure him.

7. Song of the Angels – William-Adolphe Bouguereau

Another famous painting created by the French artist William-Adolphe Bouguereau is known as Song of the Angels. Painted in 1881, this work is one that is also equally famous among paintings done by Bouguereau that feature angels.

It has more of a classical appearance that seems to imitate the works of the Renaissance period in the figures of angles and what is understood to be the Virgin Mary holding a sleeping baby Jesus.

The majority of paintings of Jesus focus on him as an adult there are still a few artists which portray him as a child.

The painting seems to capture the instant that the baby Jesus falls asleep as two of the angels seem to glance at the child to ensure that they have successfully played him to sleep.

Each element in the painting is done with a great deal of careful detail and the Virgin Mary seems to be unaware of the presence of the heavenly beings as they finish their song.

8. The Angel Standing in the Sun – Joseph Mallord William Turner

Joseph Mallord William Turner created one of the more famous angel paintings in his 1846 work titled The Angel Standing in the Sun.

Whilst Turner would normally be mentioned for his landscape paintings and ocean paintings he did occasionally visit more religious themes particularly during the 1830’s.

Unlike most others on our list, this painting is one of fiery indignation as the viewer sees an angelic being standing in the sun with a long sword as if about to exact vengeance upon mankind. The scene hearkens back to the Bible teaching that God will one day punish the world by destroying it with fire.

Faint figures are also seen at the lower right and left of the canvas. To the viewer’s left is what is described as Adam and Eve lamenting over the death of their son Abel at the hands of Cain.

To the right is the figure of Judith as she is beheading the Assyrian general Holofernes in an effort to save her people from death. Turner exhibited the painting with the words ‘the feast of vultures when the day is done.’

One of the most famous angel paintings ever created in the 17th century was done by Peter Paul Rubens in 1614. The work is an iconic painting that depicts an allegorical scene of good triumphing over evil, which is represented by the Christian figure who is posed atop his adversaries, joined by an angelic being on either side.

The painting has many different symbolic meanings, according to various art critics and historians. The victor is seen sitting on the dead bodies of men who appear to be bound hand and foot, representing a Biblical depiction of how Christ is said to bind Satan and evil spirits. The winged angel is seen placing a crown of oak leaves atop the man’s head as a symbol of triumph.

10. The Annunciation of the Lord – Bartolome Esteban Murillo

One of the most iconic paintings that features numerous angelic beings is Bartolome Esteban Murillo’s work known as The Annunciation of the Lord.

Painted in 1660, Murillo’s masterpiece is famous for his use of childlike cherubim figures that are seen floating above the Virgin Mary as she is told by the Angel Gabriel that she would conceive and bear a son who would go on to become the Savior of Mankind.

These angels are depicted as infantile beings that encapsulate the innocence with which the Christians viewed angels as having during this time. In the middle of the painting is a white dove descending downward toward Mary.

This painting is widely considered to be one of the most famous works featuring angels due to Murillo’s decision to portray them in such a childlike manner.