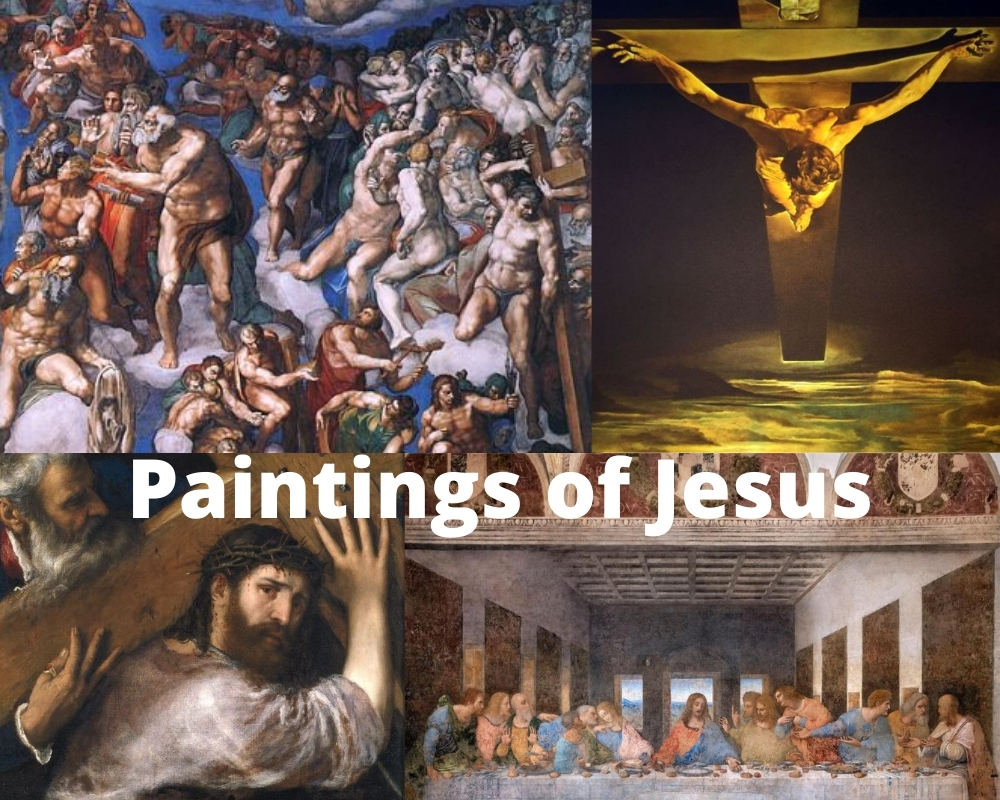 Paintings of Jesus Christ have occupied a prominent role in the art world for close on 1500 years.

Many commissions by the rich and wealthy all trying to prove their faith and muster influence with the church use Jesus Christ as the central role or theme.

Practically all of the renaissance masters have several of their famous works of art depicting either the crucifixion or some other important biblical scene that contains Christ.

These types of commissions in their day would have been extremely expensive and only the very rich and powerful could afford to undertake these kinds of works.

The most famous painting of Jesus Christ is without doubt the last supper.

Painted by none other than Leonardo da Vinci it depicts the last supper of Jesus Christ and the twelve apostles.

Painted in the late 15th century as a mural on the walls of the refectory of the Convent of Santa Maria delle Grazie in Milan.

Fresco paintings are usually created by applying pigment onto intonaco, or a thin layer of wet lime plaster.

This is normally the best technique to use as it allows the fresco to deal with the natural breathing or sweating that a wall does as moisture moves out to the surface.

However, with the Last Supper da Vinci decide to use oil paint as it dries much slower and would allow him to work on the image in a much slower and more detailed manner.

Leonardo knew that the natural moisture that permeates through most stone wall buildings would have to be sealed if he were to use oil paints, or it would ruin his work.

He added a double coat of gesso, mastic, and pitch to fight this.

The artwork has had to be restored many times in its long history.

Very little of the initial top layer of oil painting is left as a consequence of both environmental and deliberate damage.

The transfiguration is the final work by the great renaissance artist Raphael that was commissioned by Cardinal Giulio de Medici of the Medici banking dynasty.

It was originally conceived as a alter piece that was to hang as the central altarpiece for the Narbonne Cathedral in France it now hangs in the Pinacoteca Vaticana in Vatican City.

Following Raphael’s death the painting was never sent to France and the Cardinal instead hung on the high altar in the Blessed Amadeo’s church of San Pietro in Montorio, Rome in 1523.

In 1797 however it was taken by French troops as part of Napoleon’s Italian campaign and subsequently hung in the Louvre.

It would be Raphael’s finally painting and he would work on it right up until his death in April 1520.

The cleaning of the painting from 1972 to 1976 showed that only some of the lower left figures were completed by assistants, while the majority of the painting was by Raphael himself.

The Last Judgment is a huge fresco painted by Michelangelo that adorns the entire alter wall in the Vatican City of the Sistine Chapel.

Between 1536 and 1541, it took Michelangelo over four years to complete because of not only its scale, but also the difficulty and number of figures.

25 years after the completion of the Sistine Chapel Ceiling, he began working on it and by the time it was finished, he was considerably old at 67 at that point.

All the males were initially painted as nudes, but the inclusion of painted draperies later covered them up.

The reception was originally mixed between praise and criticism, with the nudes being a big topic of debate as well as how muscular a number of the figures were.

It is a reflection of Christ’s Second Coming and the ultimate and everlasting judgment of all mankind by God.

As judged by Christ, who is surrounded by famous saints, the dead rise and descend to their destiny. There are more than 300 figures in total.

It was originally commissioned by Pope Clement VII, but it was completed under Pope Paul III, whose stronger reforming views undoubtedly influenced the final treatment.

From the beginning, the reception of the painting was mixed, with much praise but also criticism on both religious and artistic grounds.

One point of controversy was both the amount of nudity and the muscular design of the body, and another was the overall composition.

El Greco created numerous paintings of Christ bearing the cross during his long career in Spain in roughly 1580.

Unlike some of his earlier works this piece is not a narrative one, Christ is alone in the image and no really background or setting is discernible.

The image portrays Christ as he bears the cross to his death in a moment of personal contemplation, thereby performing the greatest sacrifice for humanity.

The eyes of Christ are raised up to the heavens in the painting as he begins his walk toward his crucifixion. His gentle hands curl around the cross as the backdrop is filled by a stormy night.

El Greco as his name suggests was Greek and acquired the name while living in Italy during the Renaissance era, he worked under the

El Greco lived in Venice , Italy, and studied under Titian, one of Italy’s most famous Renaissance painters.

Christ Crucified was painted in 1632 by Diego Velazquez.

Diego Velazquez was the official painter to the then king of Spain Philip IV and although he completed on a few religious painting this is actually one of his most famous works of art.

It depicts the crucifixion of Jesus in a very understated way when compared to some of his other works from the same period.

Velazquez would make several nude studies when he spent time in Rome which he would use in some of his later works like Apollo at the Forge of Vulcan and Joseph’s Tunic.

With Christ Crucified however the image is much more minimalist and has a very paired down and respectful feel.

There is no supporting scene or any other people to focus on just a very raw ad bare full front on near life size nude painting.

Although there were preparatory siting doe with live models the actually painting is thought to have been completed back in Spain after he returned from Italy in roughly 1631.

It currently resides in the Museo del Prado in Madrid.

6. Christ Carrying the Cross by Titian

Tiziano Vicelli or Titian was one of the most famous names in art during the early Renaissance period.

He was born in roughly 1488 and was the founder of the Venetian school of painting having apprenticed with Giovani Bellini(considered the greatest of his day).

In this scene Christ is accompanied by his executioner and we can also see a noose around his neck.

At the time this types of close up scene were one or two figures fill the entire canvas was the favored style at the time.

A considerably more controversial painting of Jesus and the crucifixion Francis Bacon’s piece was painted while he was quite young, roughly 24 years old.

One of the few modern artists on the list, Bacon spent a considerable amount of time working on religious paintings.

It was his first work to find any real attention and the sale of subsequent pieces enabled him to fund his first solo exhibition which sadly gained a very negative review from the Times.

This led Bacon to destroy many of his earlier works some of which were also crucifixion images.

The other crucifixion paintings were some of the few that he would later say that he regretted destroying.

Like a lot of abstract paintings this type of work for the general public can be difficult to really appreciate but when it is taken in context of Bacon’s other work only then does its genius only really start to come to light.

8. Christ of St John of the Cross

Christ of Saint John of the Cross was painted by Salvador Dali in 1951.

It portrays Jesus Christ floating over a body of water complete with a boat and fishermen on the cross in a darkened sky.

While it is a depiction of the crucifixion, it is devoid of nails, blood, and a crown of thorns, since, according to Dalí, he was persuaded by a dream that these features would mar his depiction of Christ.

Dali said that the image was inspired by a drawing, preserved in the Convent of the Incarnation in Avila, Spain, and done by Saint John of the Cross himself.

Dali had seen the sketch in 1950 and he claims that he subsequently experienced a series of dreams in which Chris was encouraging him to paint what he had saw in the dreams.

It breaks with more traditional crucifix scenes as the view is from above and slightly to the front giving a very surreal perspective from which to view Jesus.

Salvator Mundi was believed to have been painted by Leonardo da Vinci in 1500.

The painting has had a checkered past and many leading Renaissance scholars actually believe it to be a fake rather than a genuine da Vinci original work.

By fake we mean that it is rumored to be a copy of a long lost original veiled with over-painting.

Many believe that Leonardo has only painted a small percentage of the canvas and that it was finished off subsequently by some other artist.

It has undergone extensive restoration like a lot of paintings from that period.

It is one of Leonardo’s less than twenty known works, and was the only one to remain in a private collection.

It was sold by Christie’s in New York to Prince Badr bin Abdullah at auction for $450.3 million on 15 November 2017, setting a new record for the most expensive painting ever sold at public auction.

The orb in the picture is said to represent the world by part of the reason that some scholars do ot believe it’s authenticity is that the orb does not refract light in the correct way.

Da Vinci had spent considerable time studying optics and how light moves through glasss the argument is that if it was an authentic da Vinci then the artist would have correctly painted this piece of the painting.

10. Christ on the Cross by Rubens

Chris on the Cross was one of many crucifixion paintings that were painted by Rubens.

It draws on many classical paniting techniques in particular how light and shadow are handled.

Rubens was famous for his religious works of art and he became the Catholic faith’s most renowned painter during his career. During his visit to Italy, he created many Counter-Reformation altarpieces and earned several commissions for paintings.

We hope you have enjoyed out list of famous paintings of Jesus, these are but a fraction of the many thousands of pieces that have been painted over the past thousand years.