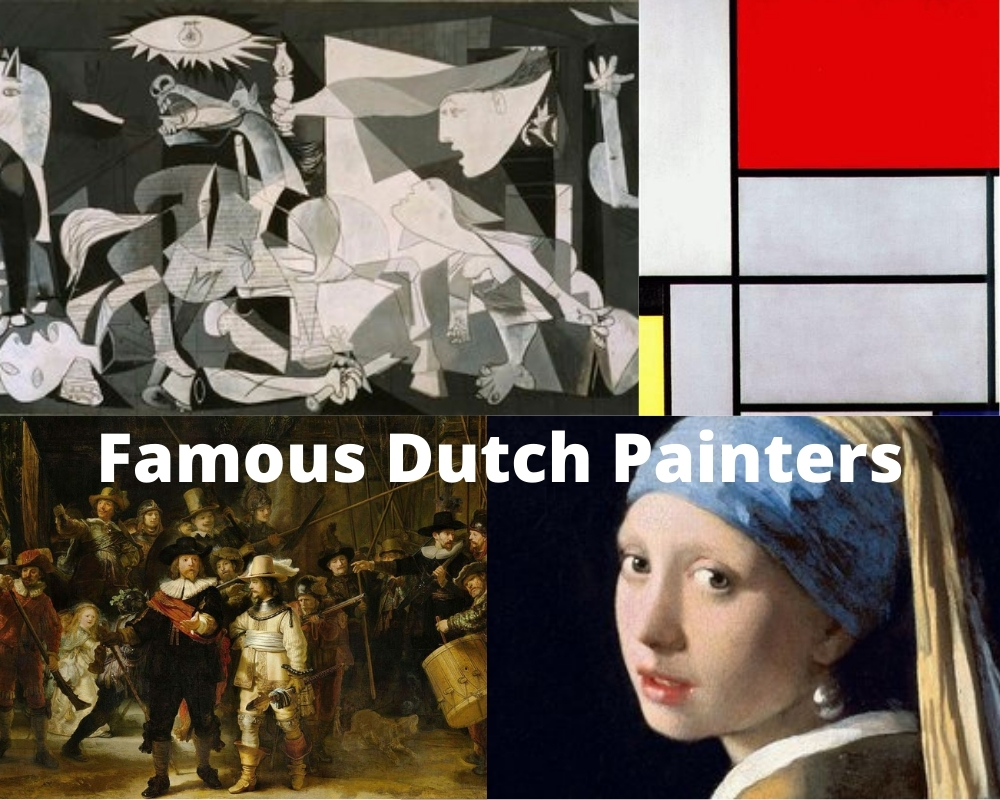 The contribution to the art world by the great Dutch masters cannot be underestimated, they produced a massive volume of paintings in the 17th century spanning many different genres.

Although many famous painters such as Rembrandt and Vermeer are associated with the Dutch Golden age of painting the Netherlands has also produced such giants of modern art like Van Gogh, de Kooning and Mondrian.

Vincent van Gogh was born 30 March 1853 and died 37 years later in France. One of his most famous works is Starry Night, and it showcased his Modern, Post-impressionist painting style.

In the early years, he was known to have stuck with paintings of peasant families using dark colors. He was fascinated by the emotion he could convey with paint. After some time in Paris, he begun painting with brighter colors. This is where he painted his famous self portrait.

In the late 1880s, his mental state started to deteriorate. He admitted himself to a mental hospital where he continued to paint. During his time in the hospital, a lot of his work involved a cypress tree with swirling colors around it – most notably, Starry Night.

His love for painting and art lead him to obsession. He would cut off his ear after discussing paints with a fellow painter, and he would go without food, sleep, or water while working.

Rembrandt was born 15 July 1606 and died 4 October 1669. He lived during the Dutch Golden Age, and specialized in paintings and art.

His portfolio was mostly made up of portraits. He would famously paint scenes from the Bible.

He was one of the few painters from history that gained a lot of popularity during his life. Many other painters became popularized posthumously.

His personal style of painting involved dark backgrounds and a mix of light and dark colors for his portraits. Most of his work is darker on the outsides and lighter on the inside to draw the viewer’s eye to the center.

There is no official birth date for Johannes Vermeer, but it is recorded that he died 15 December 1675, more than 45 years of age. In fact, it isn’t until recently that any information came out about his life. He lived a very private and personal life.

His most famous painting is Girl with Pearl Earring piece, and he has dozens of finished paintings attributed to his name.

His style involved a lot of rich, saturated color on a dark background. He preferred to paint portraits and liked to include a lot of details.

Piet Mondrian was born 7 March 1872 and died 1 February 1944. He was a modern artist and started his career by painted using cubist and post-impressionist styles. A lot of his more famous pieces, like Tableau I, showcased abstract styling. Over time, his art became more and more abstract.

During his career, he put together more than 250 different paintings, mostly using his geometric abstraction style that he called “neoplasticism”. He liked to use checkerboard patterns and fill the spaces with mostly whites or primary colors. The lines creating the pattern would always be painted in black.

The final four years of his life were spent in New York to escape Europe during the war. His final piece used yellows which were apparently influenced by the taxis in New York City.

Willem de Kooning was born 24 April 1904 and died in 1997. He is among the most famous abstract painters. At 12 years old, he begun attending evening classes at an art university. At 22, his professional art career begun in New York City.

He is well known for his very controversial paintings of women. He spent most of his career in America, and he is considered one of the top American artists of the mid-century. He worked on major projects across the city, was commissioned for a mural at the World’s Fair, and even taught collegiate art courses at Black Mountain College and Yale.

From the 30s to the 40s, his art became more and more aggressive, vulgar, and sexual. From the 50s and onward, his style toned down and became more landscapes and scenic art.

He eventually passed from Alzheimer’s at 93 years old in the States.

Frans Hals was born in 1582 and died 26 August 1666. There is very little written information about his early life, but he left behind a long list of impressive portraits.

His notable style included wild and loose brush strokes, and dark colors. He was among the most influential painters to introduce the style of portrait paintings.

He spent most of his life creating portraits professionally. In the 1640s, his portraits started to show sadness and standoffishness. The subjects seemed to be looking into the viewer for help.

In the 50s, his style again changed. Now, the subjects seemed awestruck and surprised.

It is believed that he was very respected among the areas that he lived. People appreciated his talent, though a larger reach or influence wasn’t achieved. It wasn’t until the 19th century that attention begun to rise for Hals and he gained a lot of notoriety posthumously.

Jan Steen was born in 1626 and was buried 3 February 1679. He was a Dutch painter alive during the Dutch Golden Age. His paintings would show everyday scenes, and they were typically lively and colorful.

Most of his paintings, like The Dancing Couple, showed a very humorous scene. He was one of the founding members of The Leiden Painter’s Guild of St. Luke.

As he got older, his paintings became more scenic and involved fewer people. In the end, he was painting strictly landscape scenes. No matter the subject, Steen’s pieces would always show masterful coloring and technique.

He was said to have spent a lot of time at local taverns, or bars. His father owned a tavern, and people wonder if his drinking led to the more solitary pieces at the end of his career. At any rate, the expressions he could capture on subjects’ faces were unmatched at the time.

Pieter Brueghel the Elder was born in 1525 and died 9 September 1569. He was a Northern Renaissance painter and printmaker. His two most notable styles were portraits of peasant scenes, and gorgeous landscapes.

He is typically the artist people think of when they hear “Brueghel”, as he was the most talented and renowned. In the final decade of his life, he would spell his last name without the “h”.

Two of his more famous pieces are The Beggars and The Tower of Babel. As he got older, his pieces became simpler, with fewer subjects and smaller landscapes.

He has an incredible style of painting landscapes with a lot of detail. He would use vibrant colors and create his work with technical prowess that other painters didn’t have in the mid-16th century. Some of his pieces would have hundreds of subjects scattered across the scene.

Willem Kalf was born 3 November 1619 and died 31 July 1693. He painted still-life compositions, and is considered one of the most famous Dutch painters to do so. His most notable work includes Still Life with a Chinese Tureen.

In the late 1630s, Kalf took a trip to Paris, and that’s when his style started to take shape. This would be his teenage years and his early-20s. His early work would revolve around simple objects in the kitchen. This would later transform into luxurious and complex settings.

His notable style involved dark backgrounds, simple compositions, and incredible detail in the highlights. Few other artists of his generation could paint with the same texture and richness in the colors.

While alive, many rich people were in love with Kalf’s work. He had a very high demand for his pieces, and people would pay top dollar. Subsequently, his paintings give a taste of what the homes looked like of these rich people.

Pieter Brueghel the Younger was born in 1564 and died in 1638. He would paint landscapes and scenes, typically revolving around rustic and religious concepts. He had a fascination with painting scenes of Hell, and he would later be referred to as Hell Brueghel.

His career begun by copying some of his father’s work. In a lot of cases, his copies cannot be discerned from other top artists of the centuries that followed. A notable such copy is The Abduction of Proserpina.

As his style developed, it became more grim and ghastly. His later works would show large scenes of Hell, rich with oranges and reds and plenty of dark colors. He lacked the technical ability that his father had, but he certainly had the creativity.