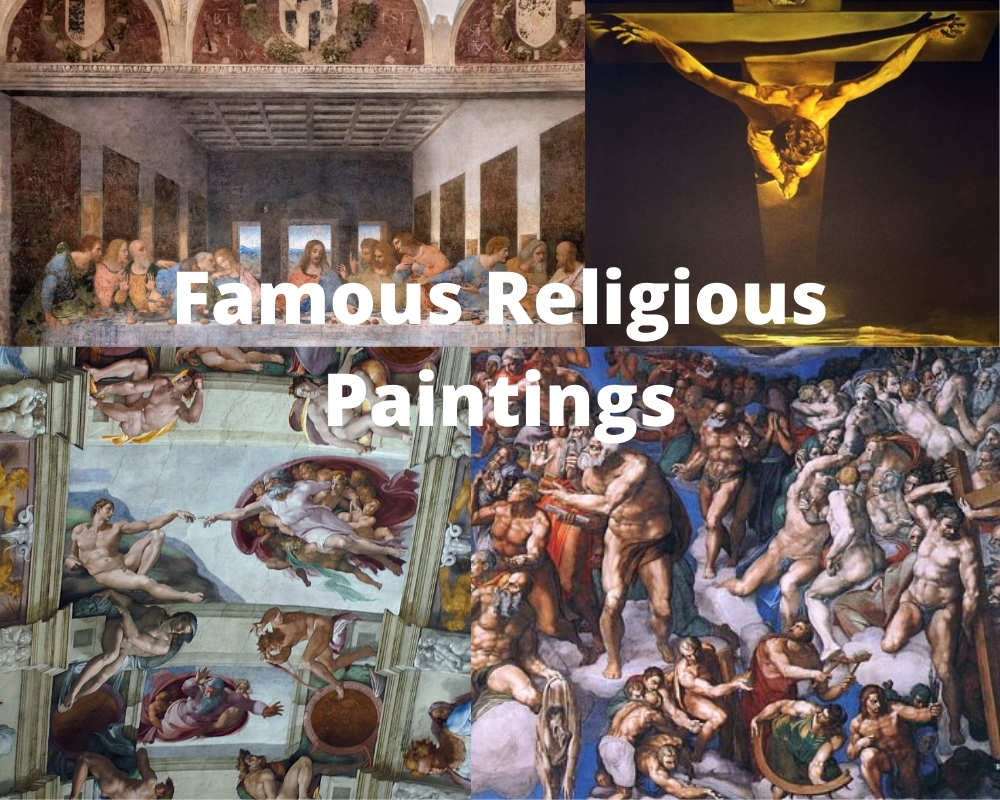 Few subjects have drawn as much attention from some of the world’s greatest painters than that of religion. Many of these artists believed their works were being done for a higher purpose, often to draw conviction from the viewer and strengthen their faith.

Many religious paintings focus on some of the most important religious events and stories in human history, with each having their own unique interpretation of what took place.

Some of the world’s most magnificent religious paintings focus on Biblical accounts from the Old and New Testaments. These paintings are as moving as they are spectacular, with some spanning the entirety of chapel ceilings or walls.

Despite many of the paintings on this list being well over 1,000 years old, they remain the pinnacle of artistic work featuring religious subjects.

Da Vinci brings to life the tense dynamic that is said to have gripped the last meal that Jesus enjoyed with his disciples.

There are many famous paintings of Jesus, The Last Supper stands above them all.

Hailed as one of the most intelligent people to ever live, Leonardo da Vinci’s work spans across fields of art, engineering, and many other intriguing areas that prove the man himself was nothing short of a genius.

Many critics and art enthusiasts argue that his work featuring Christ’s last supper is more esteemed than the famed Mona Lisa. Completed in 1498, the painting is set with a central view of the entire table that seats Jesus and his twelve disciples.

The painting captures the moment following Jesus announcing that one of his loyal followers would betray him, sparking outcry from his most devoted friends.

The painting is famous not only for its incredible amount of detail and realism, but the range of emotion featured on each one of the apostles, which is said to perfectly portray characteristics that is known about each one from scripture and historical records.

2. The Creation of Adam – Michelangelo Buonarroti

Among the most famous works of the Renaissance is Michelangelo Buonarroti’s work titled The Creation of Adam, which is featured on the ceiling of the Sistine Chapel in Rome, Italy in 1512.

The painting is one of the most recognizable works in human history and portrays the moment that God created the first man, Adam, according to the Biblical account of Genesis.

The painting is remarkably well-preserved and was done using fresco, which was widely popular among artists in that time who worked on murals.

The rest of Michaelangelo’s work on the chapel ceiling features other instances from Biblical accounts, but the central feature of the entire masterpiece is The Creation of Adam.

The image has remained one of the most iconic scenes in existence.

Later in the life of Michelangelo, he would paint what has become one of the most famous murals of all time. The Last Judgement is a fresco painting that was done in 1541 on the altar wall of the Sistine Chapel in Rome, Italy.

The painting features a litany of religious figures who are portrayed as all being present during the last and final act of God’s judgement on mankind at the return of Jesus Christ.

While the painting has inspired much adoration from art lovers and critics alike, many religious figures accused Michelangelo of painting pagan symbols and items that are cleverly incorporated into the painting.

Jesus is the central figure of the masterpiece and is encircled by saints and prominent figures in Christian and Judaic theology.

The painting has remained surprisingly well-preserved and is considered one of Michelangelo’s greatest works, although he viewed painting as an inferior form of artistic expression to that of sculpture.

Regardless of the artist’s views on his work or the opinion of religious scholars, The Last Judgement is an awe-inspiring work that is arguably one of the best religious paintings in history.

The Renaissance period was full of some of the most gifted painters in history and the realism and level of detail of Raphael is nearly unable to be replicated.

His work titled Sistine Madonna was painted in 1512 and was commissioned by Pope Julius II as a gift to a monastery near Milan known as San Sisto in Piacenza.

The painting depicts the Virgin Mary, known as the Madonna, in the center of the painting holding the infant Jesus. On either side of the Virgin Mary are Saint Sixtus and Saint Barbara who are intently gazing upon the child Christ.

The painting has long been praised for its beauty and the gentle, caring nature while each figure in the painting was done. Perhaps two of the most easily-recognizable figures in the painting are the two cherubs featured staring innocently at Mary holding Jesus from beneath her feet.

5. Christ of Saint John of the Cross – Salvador Dali

Salvador Dali was known as one of the greatest surrealist painters in history, but his work titled Christ of Saint John of the Cross was one that features a thought provoking pose of Christ upon the cross.

Instead of his usual technique of warped figures and irregular objects, Dali painted the work from the view that God must have had as Christ hung upon the cross—which was based on a drawing from a 16th century friar named John of the Cross.

The work was an instant sensation in 1951 and has since been praised for its detail, as well as the truly unique point of view that it offers.

The painting has been recognized for the lack of blood and gore that is so often associated with crucifixion scenes of Christ. Dali said that he was inspired by a dream not to include the elements of blood or other details as it might ruin the work.

6. The Return of the Prodigal Son – Rembrandt van Rijn

Rembrandt van Rijn was widely known for the elements of realism in his paintings, especially those accentuated by light and darkness. His painting titled The Return of the Prodigal Son features one of the most famous parables of Jesus in which a father and son are reunited.

Rembrandt finished the work in 1669 and has been praised by art enthusiasts and critics for the emotional moment that is captured in the scene, as well as the extreme level of detail.

According to the Biblical account, the Prodigal Son leaves his father’s house with his early inheritance in hand only to return years later destitute and begging to be accepted back into the family’s home as a servant, as he no longer felt deserving of his father’s honor.

To his astonishment, his father welcomes the son back with open arms and rejoices while another son is undoubtedly scorned by such a reaction from his father.

The painting perfectly captures the moment of the Prodigal Son’s return to his father as he lovingly begs for forgiveness at his feet. The father is seen consoling his son as the brother looks on angrily.

7. The Burial of the Count of Orgaz – El Greco

The most famous painter in the Spanish Renaissance is known as El Greco, who bore the name Doménikos Theotokópoulos during his life. His work titled The Burial of the Count of Orgaz was commissioned in 1586 by the parish priest of Santo Tomé.

The painting was done to commemorate the life and miraculous funeral scene of Don Gonzalo Ruíz, who was dubbed the Count of Orgaz, and was widely known for his piety and philanthropy.

The painting is one that features both the real and unseen as the lower portion contains the clergy and leaders in Toledo, Spain at that time while the upper portion depicts angelic beings waiting to take the Count of Orgaz to heaven.

8. The Calling of St Matthew – Caravaggio

Few artists are as well known for their ability to portray extreme levels of light and dark in the same way that Caravaggio could. His work titled The Calling of St. Matthew was completed in 1600 and features a powerful Biblical scene in which Jesus calls for Matthew to follow him.

The painting has gathered much acclaim for its remarkable realism as well as the emotions that are clearly portrayed in the figures in the work.

Jesus is seen beckoning to Matthew, who sits at the table of Roman tax collection, which was an occupation that garnered much shame among Jews at this time. Matthew is shown with a great deal of a shocked expression at the request of Jesus as tax collectors were often viewed as traitors to the Jewish faith.

One of the most prominent figures in the French Realism Movement was Jean-François Millet, who was renowned for the uncanny realistic nature of his work.

The painting that is known as The Angelus was done in 1859 under the original title Prayer for the Potato Crop. Painted as a series featuring the lives of French peasants, Millet’s work is a testament to the harsh life that hardworking farmers had to endure during this era.

The painting shows two peasants, a man and woman, standing in the field after a long day’s work. With the sun fading on the horizon, the couple pray over their crop, which was undoubtedly connected to their survival at this difficult period in history.

The work has been praised for its realism, as well as the surprising amount of detail in the fading light.

Bartolomé Esteban Murillo completed his most famous work in 1680 titled The Immaculate Conception. Many religious clerics and leaders of the day balked at the idea of a painting depicting this moment in religious history as the Virgin Mary is said to have miraculously conceived the Christ in her womb due to God’s intervention.

The painting features an angelic scene with Mary as the central figure, enveloped in clouds and a glowing light in the presence of God.

It is one of many famous angel paintings that were they are featured along side the Virgin Mary.

She is seen with small cherubs surrounding her legs as she stands upon a crescent moon, which is a reference to a famous verse in the book of Revelations.