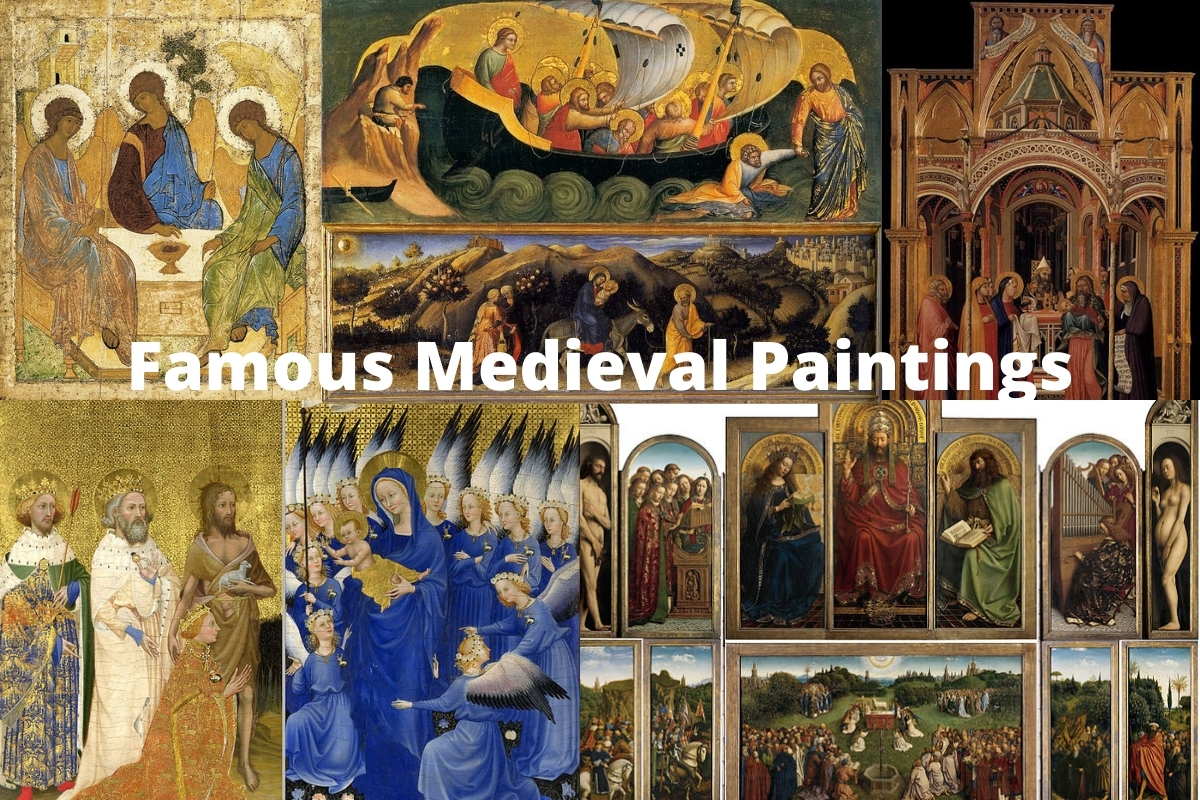 The medieval period was one that featured the rise of small kingdoms across much of Europe, especially in areas that were once ruled by the Roman Empire.

The fall of Rome’s might marked the beginning of the medieval era, which lasted until roughly 1500 A.D.

During this one thousand-year period, artwork throughout the areas surrounding the Mediterranean Sea, as well as the rest of Europe focused heavily on religious works, most notably those pertaining to Christianity.

Various painters rose to prominence in and around Italy during the latter portion of the medieval years, just before the Renaissance would begin to take shape. The paintings created during the medieval times were remarkable in their own right in many ways.

In this article, we will explore the most famous medieval paintings and more closely examine the artists who created them, as well as the subject matter each work contained.

Giotto Di Bondone was one of the most notable artists from the medieval period. He was known simply as Giotto and created a large collection of religious works that focused on the life of Christ, as well as those of his 12 apostles.

His famous painting, Lamentation (The Mourning of Christ) is the most recognized work from the medieval era and features the moments immediately after Christ’s death before he was laid to rest in a tomb.

The 1306 work is featured on the north wall of the Scrovegni Chapel, which is located in Padua, Italy. Giotto is credited with influencing many other artists who would go on to form the origins of the Renaissance period, which also greatly emphasized Christian paintings.

This particular work features the deceased Christ shortly after he was removed from the cross. Many of the notable figures from the account recorded in the New Testament are present, including his mother Mary, as well as other women such as Mary Magdalene.

The apostles and other figures are shown with halos around their heads while angels can be seen weeping in the heavens above the body of Christ.

The Wilton Diptych is one of the most highly-revered and mysterious works from medieval times. The painting is featured on a small diptych, which is two panels that were designed to form a portable painting that could be easily transported and protected.

The particular artist who painted the Wilton Diptych is unknown, although most art historians and critics believe it was an English or French painter.

The work was known to have been completed in 1399, just as the medieval period was coming to an end. It was painted for King Richard II of England who is depicted as kneeling before the Holy Virgin and Child, which are featured on the right diptych panel.

The Virgin Mary and infant Jesus are depicted as being surrounded by angels who were garbed in blue robes, which was a symbol of righteousness in medieval times.

The diptych is made of Baltic oak and remains in remarkable condition at the National Gallery in London.

King Richard II is seen surrounded by three prominent figures from Christian theology and English royalty as John the Baptist, Edward the Confessor and Edmund the Martyr are each standing over him.

One of the best known medieval paintings to come from the Dutch region is Hubert and Jan van Eyck’s painting that is a complex compilation of polyptych panels that each feature a notable figure or event from the Christian New Testament Bible, as well as the Old Testament.

The panels are arranged in two vertically-aligned layouts that can be folded outward and arranged in a unique pattern.

The work is credited to two prominent Flemish brothers who produced a number of prestigious artworks during this time period.

Hubert and Jan van Eyck were known to have painted a number of other religious-themed works that featured various scenes from the Bible, but none would gain as much praise as this 1432 work.

The upper register of panels feature a scene focused on heavenly redemption while the second register features a collection of clergy, angels and two sculptures of John the Baptist and John the Evangelist.

4. The Presentation in the Temple – Ambrogio Lorenzetti

Italian painter Ambrogio Lorenzetti has been credited as one of the central figures who greatly influenced a litany of Renaissance artists who would follow after him more than a century later.

He is known to have painted another famous medieval work that is also featured on a panel-style surface that features four of the patron saints from the city of Siena, Italy.

This work was completed in 1342 and included Saint Ansanus, Saint Sabinus of Spoleto, Saint Victor, and Saint Crescentius. The painting was originally displayed at the altar of Saint Crescentius at the Cathedral of Siena, but has since been moved to Florence, Italy.

The painting depicts the presentation of an infant child, which was customarily done forty days after birth in which the mother and child are purified in a ritual cleansing with prayer.

The woman holding the cloth that was wrapped around the child is depicted as the Virgin Mary while the child is believed to be the baby Jesus.

5. Diptych of the Virgin and Child Enthroned and the Crucifixion

Another medieval painting that contains an air of mystery is known as the Diptych of the Virgin and Child Enthroned and the Crucifixion.

This, too, was painted on a set of diptych panels and remains in good condition considering it is believed to have been finished around 1275 A.D.

The diptych features a very simple, straightforward depiction of the Virgin Mary seated on the left diptych holding the infant Jesus while the two are joined by what appears to be cherubs, or child-like angelic beings hovering above the Mother and Son.

The right diptych panel presents a much more grim scene in which the Mother of Jesus and another woman are joined at the foot of the crucified Jesus. Like the opposite panel, this diptych also features a set of angels looking down on the crucifixion scene.

One of the most recognized pieces of art from the medieval period was done by Andrei Rublev, a Russian painter who produced various religious works during the 15th century, just before the Renaissance era would begin in Italy.

This work is easily the most famous pre-Renaissance work from Russia and is now on display at the Tretyakov Gallery in Moscow, Russia.

The famous work was commissioned to honor Saint Sergius of Radonezh who played a pivotal role as a religious leader in Moscow during the century prior to the painting’s creation.

There is some debate as to the exact year in which the painting was finished with some scholars believing it to be from 1411 while another date is later around 1427.

The three figures in the painting are assumed to be the Holy Trinity of God the Father, the Son, and the Holy Spirit.

Another notable work that was credited to Giotto di Bondone, who was known as Giotto, is titled Ognissanti Madonna. This simple, yet elegant depiction of the Virgin Mary with baby Jesus is dated to around 1310 and remains in remarkable condition considering its history.

There is some debate among art historians as to whether this painting was actually done by Giotto himself, or one of his students or others from the time period.

The painting features an oversized Madonna, or Virgin Mary, with the infant Jesus who are depicted as being encircled by angels and various figures from the Bible.

8. Rest During the Flight into Egypt – Gentile da Fabriano

One of the most famous paintings to have been done in the 15th century is credited as coming from an artist known as Gentile da Fabriano.

This sprawling work was painted on a long, rectangular wood surface and features a rarely-painted scene of the Bible’s account of the Virgin Mary, Joseph, and baby Jesus on their travels to Egypt to escape the efforts of Herod to kill every newborn child in the birthplace of Christ.

The work depicts the young family leaving the lush open lands of their home and heading toward a vast city that is represented as Egypt, which at the time of the Biblical account, was still a sprawling metropolis.

The work is believed to have been finished in 1423 and remains one of the most widely-recognized from the medieval period.

It was not uncommon for some of the details surrounding medieval paintings to have been lost to time. One such painting was done by an unknown artist who is simply referred to as Upper Rhenish Master.

This work is believed to have been created in 1410 and is titled Paradiesgärtleins, which means Garden of Paradise.

The Virgin Mary is seen in the upper left corner, while an array of female saints from the time period are seen working and enjoying their time in the garden.

The infant Jesus is seen playing the strings of a harp while others are busy tending the garden and its trees and plants.

One of the most iconic paintings from the medieval era features a famous scene from the Bible’s New Testament in which Christ is said to have walked on water during a mighty storm.

This painting was created by Lorenzo Veneziano in 1370 and remains one of the most recognized paintings from the time period.

The work itself features a depiction of a fishing boat Jesus’ disciples were traveling in across Israel’s Sea of Galilee when a violent storm struck.

During the wind and chaos, the disciples noticed a figure calmly walking towards them. When they realized it was their leader, Jesus, Peter is recorded as leaving the safety of the boat to join Christ on the water.

Upon doing so, he briefly walks on the water with Jesus, but soon falls and sinks below the surface before quickly being rescued by Christ, who pulls him to safety. This painting is one of the most famous portrayals of the Biblical event from history.