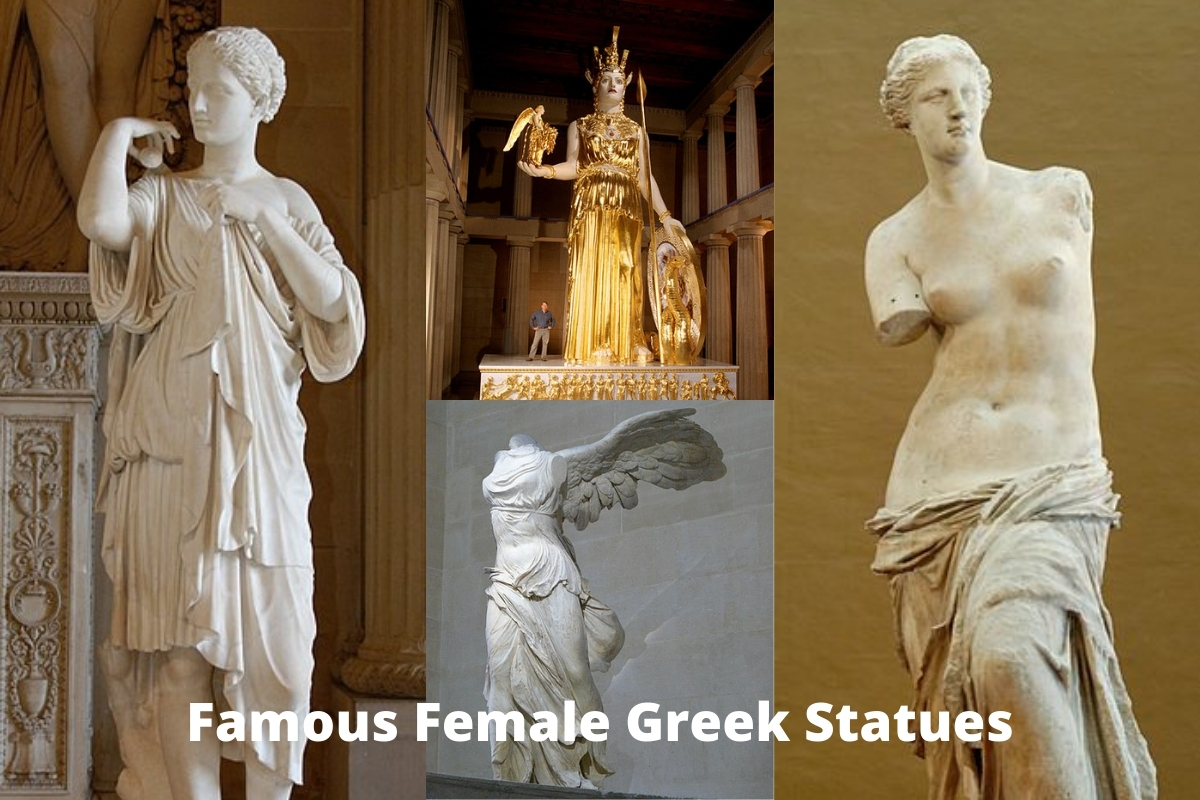 Ancient Greek culture had a special reverence for the many goddesses they worshiped. Aphrodite was the most highly-celebrated goddess as she represented beauty and love, but there were many others that the people of Greece held dear for various reasons.

While other cultures favored male figures much more heavily, the Greeks prominently displayed the female form in numerous sculptures throughout their society.

Women in ancient Greece were not permitted to interact in the political affairs of the Greek territories and city-states, but they were quite influential in the home and anything related to art or expression.

The Greek culture of the Classical period and those thereafter greatly valued strength, honor and courage and it was evident in the legends and sculptures about their goddesses that women were held in high esteem, although in a somewhat different way.

The statues from ancient Greece depict both male and female forms in various gods and goddesses. Here are 10 of the most famous female Greek statues from history.

One of the most famous female statues from ancient Greece was unearthed by a peasant farmer on the island of Milos in 1820.

After it was found, the statue was purchased by the French ambassador to Greece, Marquis de Rivière, who later gifted the work to King Louis XVIII. Just two years after it lay covered in dirt on the small Greek island, the statue was placed in Paris’ Louvre Museum.

Scholars have referred to this particular statue under many different names, but it’s most commonly called Venus de Milo. The sculpture is one of the more iconic pieces from ancient Greece as the female figure is missing both arms above the elbow.

The elegantly-designed work is believed to be a portrayal of Aphrodite, but it bears an inscription with the name Venus, which is the Roman alternative for the same figure.

Unlike many of the more well-known works that have been discovered in recent centuries, this work is not a copy, but it is believed to be the actual original.

Her body and robe covering her lower half are done with intricate detail that makes it one of the more impressive works to come from the 1st or 2nd century B.C.

Considered to be one of the greatest sculptures from the Greek Hellenistic time period, the statue known as the Winged Victory of Samothrace (Nike) is among the more famous works from ancient Greece. Archaeologists and scholars who have studied Greek sculpture believe this work was done in the 2nd century B.C.

Carved out of Parian marble, the statue was nearly lost to history until 1863 when it was uncovered during an archaeological excavation of the island of Samothrace.

The statue stands at more than 8 feet tall and is believed to portray the Greek goddess, Nike, who represents victory.

Many scholars and historians who have studied the piece believe that it was likely made to commemorate a great battle won sometime during the 2nd century B.C.

It’s another one of the more iconic works from this era as the statue is missing its head, but was designed with large, elaborate wings that are set backward as if the goddess Nike was about to take off in flight.

Praxiteles of Athens is probably the most famous Greek sculpture in history and is known to have created a number of the most celebrated works from the height of the ancient culture’s rule over certain parts of the upper Mediterranean Sea.

He lived during the 4th century B.C. and is believed to have been the first sculptor to have created a statue of a nude female form.

One of his most highly-regarded works is known as Diana of Gabii. This life-sized sculpture is likely a representation of the Greek goddess Artemis, who was a figure representing anything to do with the wilderness and hunting, as well as chastity.

It is likely the goddess’ reputation for chastity that Praxiteles chose to depict her as being fully-clothed.

The statue was discovered by Gavin Hamilton, a Scottish artist who had a passion for searching for ancient artwork that had been buried by history. Hamilton was known to have uncovered a number of impressive ancient works, including this one, which he found in Gabii, a city near Rome in 1792.

One of the oldest Greek statues depicting a woman is believed to date as far back as 530 B.C. The sculpture is titled The Peplos Kore and is a simple, yet beautiful work depicting a young Greek girl.

The white marble statue stands at roughly 46 inches in height and there is evidence to show that it was elaborately painted at one time.

Like most of the other great statues we will mention in this list of famous Greek works, the Peplos Kore was also nearly lost to antiquity had it not been discovered in 1886 by archaeologists. The sculpture was found in three separate pieces near the Erechtheion, which is on the Acropolis of Athens that’s since been dedicated as a museum.

The statue derives its name from the image of the girl and the clothes she’s wearing. Peplos was a term that was given to describe the type of garment she was wearing and Kore simply means ‘girl’ in ancient Greek.

Another prominent work created by Praxiteles is one that’s considered to be among the most famous Greek statues of women that still exist today. The work is known as Aphrodite of Knidos and is believed to have been finished sometime around the 4th century B.C.

It is the first representation of the nude female form done by a Greek sculptor and the life-sized work is quite realistic in many ways.

It’s meant to reverence Aphrodite, the Greek goddess of love and beauty, but it’s likely that the work could have been met with some opposition at the time since other sculptors typically portrayed women as being partially or fully-clothed.

The figure of Aphrodite is seen fully nude and covering her pubic area with one hand while she clutches a bathrobe in the other.

The original Greek sculpture has since been lost to history, but the Aphrodite of Knidos statue is one that’s been copied many times by Roman sculptures and others throughout history.

Athena was viewed as the queen of all Greek gods and goddesses and was a figure that was often portrayed in paintings and sculptures during the Greek Classical and Hellenistic periods.

It is one of the most famous Greek statues to have ever been made, but sadly, the work was lost at some point when Greece was overtaken by opposing forces and many of their most precious sculptures and other valuable items were either destroyed, stolen or severely damaged.

The sculpture is known as Athena Parthenos, which is commonly called Athena the Virgin. The original work is said to have been made of gold and ivory, but many copies are still in existence that are made of marble and other materials like bronze.

We know of the statue because it was written about by ancient historians such as Pausanias, who gave a detailed description of the sculpture and noted that it stood roughly four cubits high, which is nearly 8 feet tall.

7. Caryatids at the Museum of Acropolis

The Acropolis of Athens was one of the most prominent structures from ancient Greece. It was an architectural marvel and a massive temple that stood on a rocky hilltop overlooking Athens, Greece.

According to Greek custom and belief, one of the most sacred parts of this massive temple was the Erechtheion, which was a smaller portion that was located on the rear section of the building.

Instead of traditional columns holding up the roof of the Erechtheion, it was supported by Caryatids, which were female statues that were placed in a position where columns would normally be used to support the weight of the upper temple roof.

Five of the original Caryatids are still in existence today. These highly unique statues were carved out of Pentelic marble and each one is adorned with elaborate robes and long, braided hair.

Each of these female statues are virtually identical as the Caryatids are seen with most of their weight placed on their right leg while the left leg is slightly bent.

One of the oldest female statues from ancient Greece was made for the purpose of being a funerary statue, which is very similar to a modern tombstone or headstone that’s used by loved ones to mark the graves of their friends or family members.

These funerary statues would have sometimes been made to look very similar to the female that was buried beneath it.

The sculpture is known as The Phrasikleia Kore and archaeologists and historians believe it could be as old as 550 B.C. This statue is one of the most well-preserved sculptures of its kind from ancient Greece. These grave markers were only used in instances where the woman was unmarried.

Greek and Roman sculptors were responsible for creating a number of recreations and copies of various famous statues from the Classical and Hellenistic periods of Greek civilization. Some of these statues managed to survive until the present day while a majority of them have since been lost or destroyed throughout history.

As we’ve previously mentioned, the Athena Parthenos was one of the most copied works from antiquity and the original was lost at some point after the Greek city states and territories had been sacked and conquered by foreign invaders.

Art historians, critics and archaeologists all virtually agree that the most impressive copy of this famous work that still exists today is a sculpture known as Varvakeion Athena.

The statue is not quite as large as the original and only stands at roughly 41 inches tall while the Athena Parthenos stood at nearly 8 feet in height. However, the reason this sculpture is more highly-regarded than any other copy of the same work is the intricate detail it contains.

Historians who have studied various copies of the original, as well as some of the descriptions given by ancient historians and other records say that this statue is the one that resembles the original Athena Parthenos more closely than any other in existence today.

The statue depicts Athena wearing an elegant robe and crown while holding the small winged figure of Nike while her other hand holds a sacred shield that’s resting against the oikouros ophis, which was a sacred snake from Greek mythology.