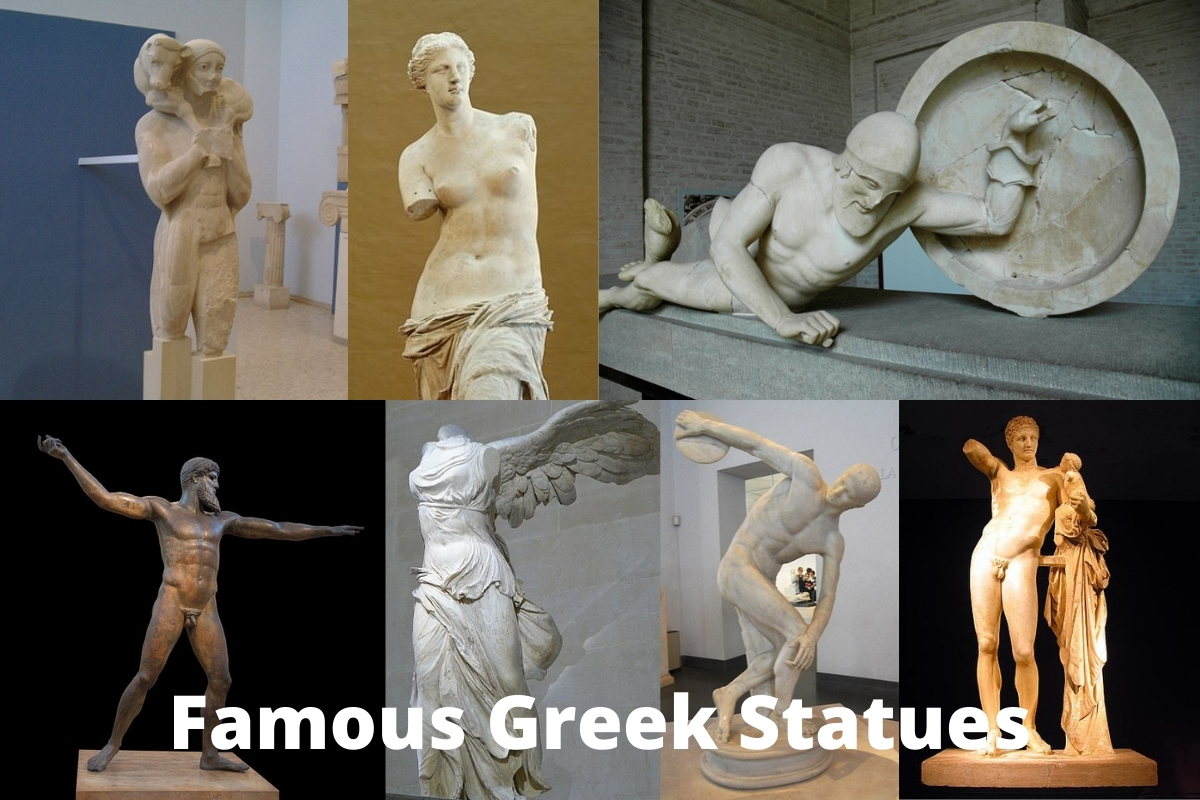 Ancient Greece is perhaps most well-known for its many different types of sculptures in and around its once-sprawling cities. Greek society placed a very high priority on artistic expression and archaeologists have uncovered thousands of completely unique works of art that include a variety of sculptures.

The sculptures that we most often associate ancient Greece with are often high and low relief works that are found along the walls of structures that were once among the most prominent buildings in Greek society at the time.

Much of the sculptures that we find today dates back to the 4th and 5th century B.C. with some of the earliest-known works coming from as far back as 700 B.C.

In this article, we will explore 10 of these ancient works that we believe are among the most famous Greek statues of all time.

One of the most intriguing sculptures from ancient Greece is a stunning and beautiful work that was nearly lost to antiquity. For hundreds of years, this sculpture sat on the ground, covered mostly with dirt on the island of Milos.

It was discovered by a peasant farmer in 1820 and immediately caught the attention of France’s King Louis XVIII who took the sculpture and displayed it in Paris’ Louvre Museum.

The work is known as Venus de Milo, although it’s actual name and the female figure’s identity remains a mystery for the most part. Greek historians and scholars believe the figure is that of Aphrodite, the Greek goddess of love and beauty.

In fact, the statue is often referred to as Aphrodite de Milos by some who are familiar with it.

Despite its damage, the statue has become one of the more iconic works from Greek culture as the woman’s arms are broken off above the elbow.

Critics and art historians believe the sculpted female figure may have been holding something in her arms, but it’s hard to be sure of how they may have been positioned.

One of ancient Greece’s oldest-surviving statues is a unique work that depicts a man carrying a small calf. Much like the Venus de Milo sculpture, this one was also discovered in 1864 in the dirt and rubble where the majestic Acropolis of Athens once stood.

The statue is known as Moschophoros, or The Calf-Bearer and is dated as being made in 560 B.C.

The meaning of the statue is likely a sacrificial offering of the young calf, which was a popular activity at this time as many Greeks did this to appease certain gods or goddesses.

Archaeologists and scholars believe the original work stood at nearly 5.5 feet tall, but this is a mere estimate since the legs of the statue have since been broken and were not recovered.

Much of the front portion of the Moschophoros was damaged at some point. The hands and upper thighs have large sections that are broken away. The statue’s plinth is still intact, however. It states that this particular statue was dedicated to the Greek goddess Athena, who represents wisdom.

The statue was dedicated by an individual named Rhombos or Kombos, who may have been an artist, or simply someone who funded the artist’s efforts for this sculpture.

There are several Greek statues that are particularly unique with their own identifying factors that make each sculpture iconic in its own way. Unfortunately, many of these Greek statues have been damaged over the thousands of years they’ve sat on the ground or in an abandoned temple.

One such work is known as Winged Victory of Samothrace, which was also discovered in the 1860’s by archaeologists who were excavating certain portions of an island that was known as Samothrace.

The meaning of the sculpture is believed to have been created to honor Nike, the Greek goddess of victory. Archaeologists and historians believe this distinct statue may have been created for the purpose of commemorating a Greek victory in a pivotal battle sometime in the 3rd to 1st century B.C.

Winged Victory of Samothrace is one of the more impressive statues that has been discovered. It’s design proves that it was one of the more complex statues made by Greek artists as it includes the female figure of Nike with long, feathered wings arching backward.

Completing such a structurally unique statue likely required the skills of an extremely talented sculptor, but there is no inscription to indicate who was responsible for this famous work.

Another work that’s considered to be among the most iconic figures from ancient Greek art is known as The Artemision Bronze. This statue is believed to be either Zeus, or another prominent Greek god such as Poseidon.

Ancient Greece was well-known for creating a variety of different bronze statues that depicted humans and animals, as well as various gods and goddesses that the culture worshiped.

The Artemisian Bronze was first discovered among the wreckage of a shipwreck off the coast of Cape Artemision in 1926. The ship appeared to be of Roman design and there were other bronze sculptures among the remains of the ship’s contents.

Some historians and archaeologists say that this indicates the vessel was likely one of the Roman ships that sailed to Greece during the first or second centuries A.D. for the purpose of taking such sculptures and statues back to Italy to be sold and displayed.

This statue depicts a male figure standing in a throwing motion with his right hand clutching what could have been a lightning bolt or trident depending on which Greek god he was meant to represent.

Few other Greek sculptures and statues have as much detail as the Ermis of Praxiteles. This distinct statue features Hermes, the Greek god and protector of travelers, alongside an infant Dionysus, which was the Greek god of festivity and drunkenness among other things.

The sculpture is sometimes called Hermes of Praxiteles and was discovered in 1877 in the rubble of what was once the Temple of Hera, Olympia, who was queen of all Greek gods and goddesses.

This work is known for its seemingly realistic detail in both the human figures of Hermes and Dionysus, but the flowing robe that’s draped over the arm of Hermes is exceptionally impressive.

The statue is credited to Praxiteles, who lived and worked in the 4th century B.C. and was considered to be one of the most prominent sculptors from ancient Greece.

Discus was one of the most popular types of sport in ancient Greece and was a central part of the early Olympic Games. There are numerous sculptures and bronze statues depicting this one single work, yet the original sculpture has been lost to history, according to historians.

The statue is known as The Discobolus of Myron, or the Discus Thrower and is believed to have been created sometime in the Classical period of Greek history around the 4th and 5th centuries B.C.

The first copy of this famous work was discovered in 1781 and is said to be a copy of a sculpture that was created by Myron, an Athenian sculptor who lived in the 5th century B.C. Since it was restored, there have been many other versions of this particular statue that have also been recovered.

7. Dying Warrior, from the Temple of Aphaia

Greek culture was very much a warlike society that embellished the glory associated with hard-fought battles. Some of the most prominent sculptures from ancient Greece were created to commemorate a great military victory over foreign invaders or other forces.

Death on a battleground was a great honor for any Greek warrior and it was believed that those who died in such a manner were able to enjoy immortality as their deeds were believed to be pleasing to the gods.

One of the most famous sculptures dealing with battle from Greek culture is called Dying Warrior, from the Temple of Aphaia.

This rare sculpture is believed to have been created around 500 B.C. and was displayed in the Temple of Aphaia, one of the more prominent ancient temples whose columns still stand on a hill on the island of Aegina.

The sculpture itself features a dying warrior clinging to his shield and spear as he takes his last breaths lying on the battlefield.

One of the older Greek statues that is from the Classical period is known as Kritios Boy. This statue is one of the older sculptures from Greek history and is an early version of the contrapposto style, which depicts the figure as placing most of their body weight on one leg, which presents the body in profile to the viewer.

This particular sculpture is believed to have been created sometime between the 4th and 5th centuries B.C. Like most of the other great Greek sculptures to have survived history, the Kritios Boy was also discovered during an 1866 archaeological excavation of the Acropolis of Athens.

The statue was found in the Perserschutt, which was a pile of debris of important statues and other sacred artifacts from Greek culture that was destroyed and thrown into a large pile by the invading Persian military forces in 480 B.C.

The story of Hercules, or Heracles, is one of the most famous Greek legends in history that has been retold throughout the last several centuries and remains widely popular in modern times as well. Heracles was a prominent figure to the Greeks many centuries ago and one statue remains from Greek antiquity that commemorates this classic tale.

The statue that remains today is known as Farnese Hercules, which is a Roman copy of the original statue of Heracles that was made in Greece during the Classical period. The Roman copy is the oldest-remaining work we have today and it is authenticated as it was signed by the prominent Roman sculptor, Glykon.

This larger-than-life sculpture stands at more than 10 feet tall and is chiseled out of marble. The original Greek statue was a bronze cast work that has since been lost to history.

10. Laocoon and his Sons

One ancient Greek work carries with it perhaps more history than any other from the time it was created, as well as the height of the Italian Renaissance.

The statue is known as Laocoon and his Sons and was believed to have been created at some point around 200 B.C. as it is mentioned by the famous ancient historian, Pliny the Elder. In his writings, Pliny mentions the statue as being displayed in the palace of the Roman Emperor Titus.

The historian noted that this work was said to have been created by three Rhodesian sculptors, Agesander, Athenodoros and Polydorus. The statue itself is one of the more unique works from ancient Greece as it depicts the story of Laocoon, who was a priest of the Greek god Poseidon.

The story tells of Laocoon and his efforts to expose the plans behind the famed Trojan horse. The priest’s own sons are said to have killed him after discovering his plans to expose the ruse that helped the Greek forces gain entry into the city of Troy.

Francesco da Sangallo recorded that the statue was unearthed in a Florence vineyard in 1506 in the presence of Pope Julius II and Michelangelo.