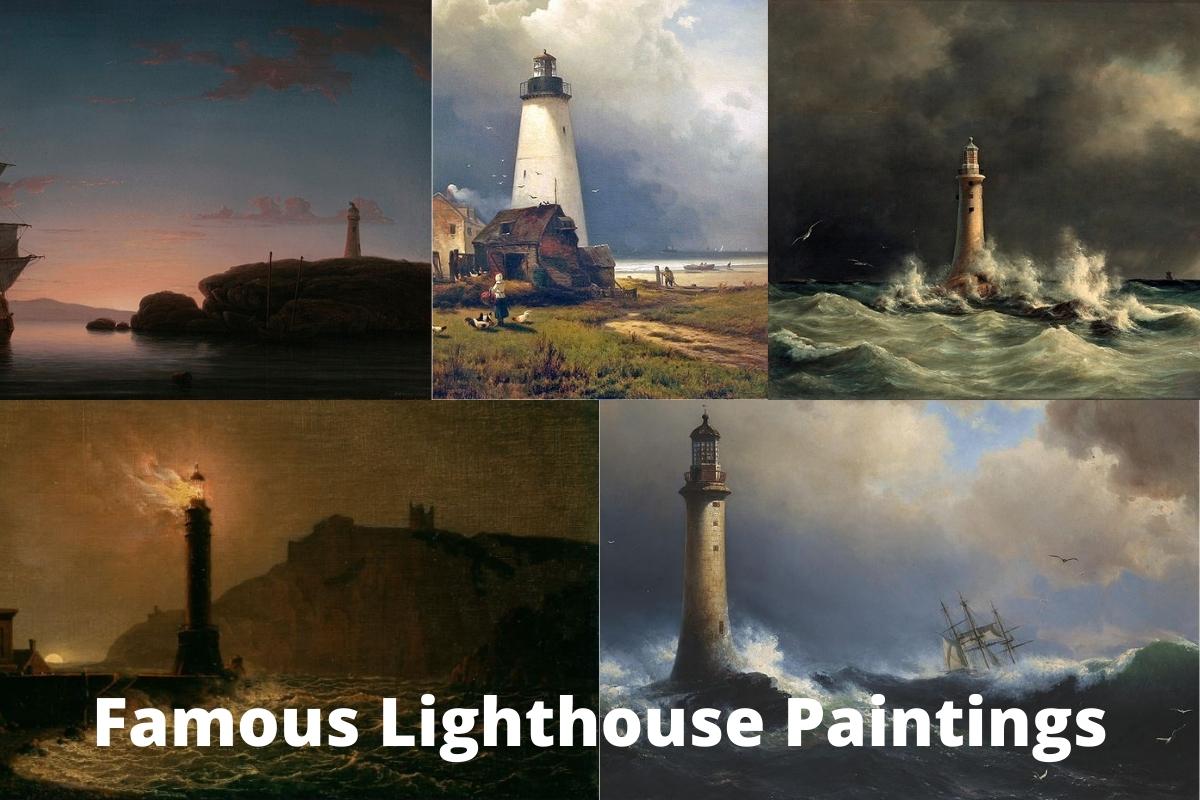 Lighthouses have been an iconic aspect of life along the sea shore throughout much of the world.

These towering structures quite literally stood as beacons of hope for sailors who might be lost in the dark night when storm clouds have blocked their view of the moon and stars.

Now, lighthouses no longer serve the same purpose they once did, but they stand as symbols of a simpler time when people had to rely on one another to make it through such events as a stormy night at sea.

It’s clear that lighthouses have long been an ideal focus for artists looking to create a painting that includes something both beautiful and meaningful.

The first known lighthouse is said to have been used by the Egyptians. Since that time, many artists have sought to portray these landmark structures and the mystique that surrounds them.

Here are 10 of the most famous lighthouse paintings ever created.

Edward Moran is remembered as one of the most famous maritime artists in American history. Many of his works feature various ocean scenes from life on the sea in the 19th century when ships carried vast quantities of goods and whaling was still necessary for oil.

One of Moran’s most well-known pieces was not a painting of the ocean, however, but a depiction of a lighthouse off the eastern coast of the United States.

Titled Sandy Hook Lighthouse, this painting was completed in 1876 at the height of Moran’s illustrious career.

The depiction of the Sandy Hook lighthouse is somewhat a mystery to art critics, historians, and anyone who is familiar with the actual lighthouse that sits on the shores of Sandy Hook because the real lighthouse is octagonal instead of round as Moran painted it.

The painting, nonetheless, is strikingly beautiful and features highly realistic elements of the sunlight cascading down on the structure, as well as the storm clouds that are blowing in from the sea.

Despite the inaccuracies that are contained in this work and the fact that Moran’s lighthouse might not even be real, this painting is considered to be one of the most highly-regarded works featuring a lighthouse to have ever been done.

Joseph Mallord William Turner was one of the most prolific English landscape artists in history. Born during the late 18th century, Turner would become a highly-celebrated Romantic era painter who commonly depicted scenes of the English countryside, as well as many maritime works.

Some of Turner’s paintings that focused on the ocean were calm and serene, but many others depicted the raging and violent nature of the sea.

His 1819 work titled Bell Rock Lighthouse is widely considered to be one of the most iconic lighthouse paintings ever done.

The Bell Rock Lighthouse had just been constructed less than a decade prior to Turner’s painting and is located on an island off the Angus coast.

This particular lighthouse was built at a time when it was considerably difficult to bring building materials out to the island. It’s construction is viewed as a feat of engineering and Turner sought to commemorate the building of the lighthouse with this painting.

Turner painted the island as being in the middle of a storm with waves pounding against the side of its walls to accurately depict the nature of the lighthouse’s construction as the island often floods during storms.

Carl Blechen was another highly-regarded painter from the Romantic era who was praised for his ability to depict scenes from nature in a gripping and realistic manner.

He was born in Germany and spent most of his art career painting landscapes and maritime works. He later became a professor at the Academy of Arts in Berlin.

Blechen painted a work in 1826 that portrayed a towering lighthouse stretching out over a wild and stormy sea.

This painting has since become one of the most notable lighthouse works ever created simply for the sheer imagination and mastery that went into creating it.

Blechen’s depiction shows the lighthouse perched atop the cliffs that jut out over the sea. The light of what appears to be the moon is blocked by the heavy clouds, but there is one small opening that casts a small shred of light on the lighthouse as the tumultuous waves can be seen cresting in the foreground.

Claude Joseph Vernet was a famous French painter who lived during the 18th century. Most of his more prominent works centered on lighthouses or structures like castles along the shoreline of the ocean in various parts of Europe.

One of his more memorable works is titled Seaport at Dawn and very much embodies some of the realities of life during the mid-1700’s in such a port city.

Painted in 1751, this work is much more calm in terms of the meteorological events taking place in the setting.

A group of children can be seen fishing along the banks of the water in the foreground while a large sailing vessel is spotted on the left side of the canvas.

Trees grow along rocky cliffs on the right side while the background depicts a faint lighthouse that’s barely visible through the morning mist.

Fitz Henry Lane is remembered as one of the more prominent artists to have worked in the Luminism movement that took place in the mid-19th century American art scene.

Many of his more famous paintings depict seaside or maritime works and he was known to have an affinity for portraying sailing vessels at sea.

One of his more notable works that centers around lighthouses is titled Lighthouse at Camden, Maine. This 1851 work was one that also features a large ship anchored out off the coast of Camden, Maine where a large lighthouse dominates the landscape.

This painting is celebrated for Lane’s masterful use of colors and how the sun’s fading light seems to cast a warm glow across the sky while the rest of the scene is darkened.

Paul Signac was a 19th century French painter who was born in Paris at a time when the art scene was bustling with incredible artists and various schools of thought about how to portray the world around us.

Signac grew up to become a notable artist who worked on paintings that were mostly considered to be part of the Impressionist movement, but he also experimented in Pointillism and other styles of painting as well.

It was one of these paintings that he did in the Pointillism style that still captures the attention of art critics and historians who think of memorable lighthouse works.

Created in 1925, Signac’s work titled Lighthouse at Groix is one of the most unique lighthouse paintings ever done.

The scene in this painting depicts a bright, sunny day along the coastal city of Groix. Many ships can be seen on either side of the painting and the lighthouse is featured prominently in the center of the painting.

7. A Lighthouse on Fire at Night – Joseph Wright of Derby

Joseph Wright of Derby was an English artist who focused the bulk of his efforts on landscapes throughout his 18th century career.

He was known for using high amounts of striking realism in his paintings, as well as having a masterful ability to portray light and darkness in various settings.

One such work that showcases Wright’s incredible ability to create a realistic and incredibly beautiful scene is titled A Lighthouse on Fire at Night.

Completed around 1770, according to most art historians, this painting is a blend of darkness mixed with the fiery glow cast on the sea and the structures below the lighthouse.

A fire rages in the upper portion of the lighthouse, which wasn’t an uncommon sight at the time due to flaws in the technology that made up most lighthouse structures.

Vilhelm Melbye was one of the most widely-celebrated artists from European history as he mainly focused on seascapes and maritime works during his 18th century career.

Born in Denmark, Melbye had a fascination with the sea from a very early age and set out on a path to become a painter after studying to become a merchant for a short while.

One of Melbye’s most famous paintings is titled Shipping off the Eddystone Lighthouse.

Art historians and Critics are not quite certain when this painting was finished, but it is one that has remained among the most iconic maritime works in recent history.

The painting depicts a tumultuous sea raging around a quaint lighthouse that is sitting on a rocky outcropping. A ship can be seen in the background struggling to stay afloat in the massive waves.

David Herman Anton Melbye was a Danish artist who lived in Paris for most of his career and focused most of his efforts on maritime-themed paintings.

Many of his works are viewed as some of the most masterful paintings of ships or the ocean, but there are a few that portray other scenes from coastal Europe in the mid-19th century.

The pale green waters being tossed to and fro in the foreground and the darkened sky is almost enough to make the viewer feel as if they are standing on board a ship looking out at such a picture.

William M. Hart was a Scottish-born painter during the early 1800’s and came from a family that would later become famous for having a number of prolific artists.

Many of his most notable paintings were ones that featured landscapes or various scenes from life on the farm for most European and American people, namely cattle farmers.

Later in his life, he produced one work that is still today considered to be one of the greatest lighthouse paintings ever done. The painting was simply titled New London, Connecticut, after the location in which the lighthouse resides.

This painting shows the octagonal lighthouse sitting atop of a hill along the Connecticut coast on a bright sunny day.

This painting is one that is much more bright and sunny that other artists who chose to depict lighthouses during times of intense storms.